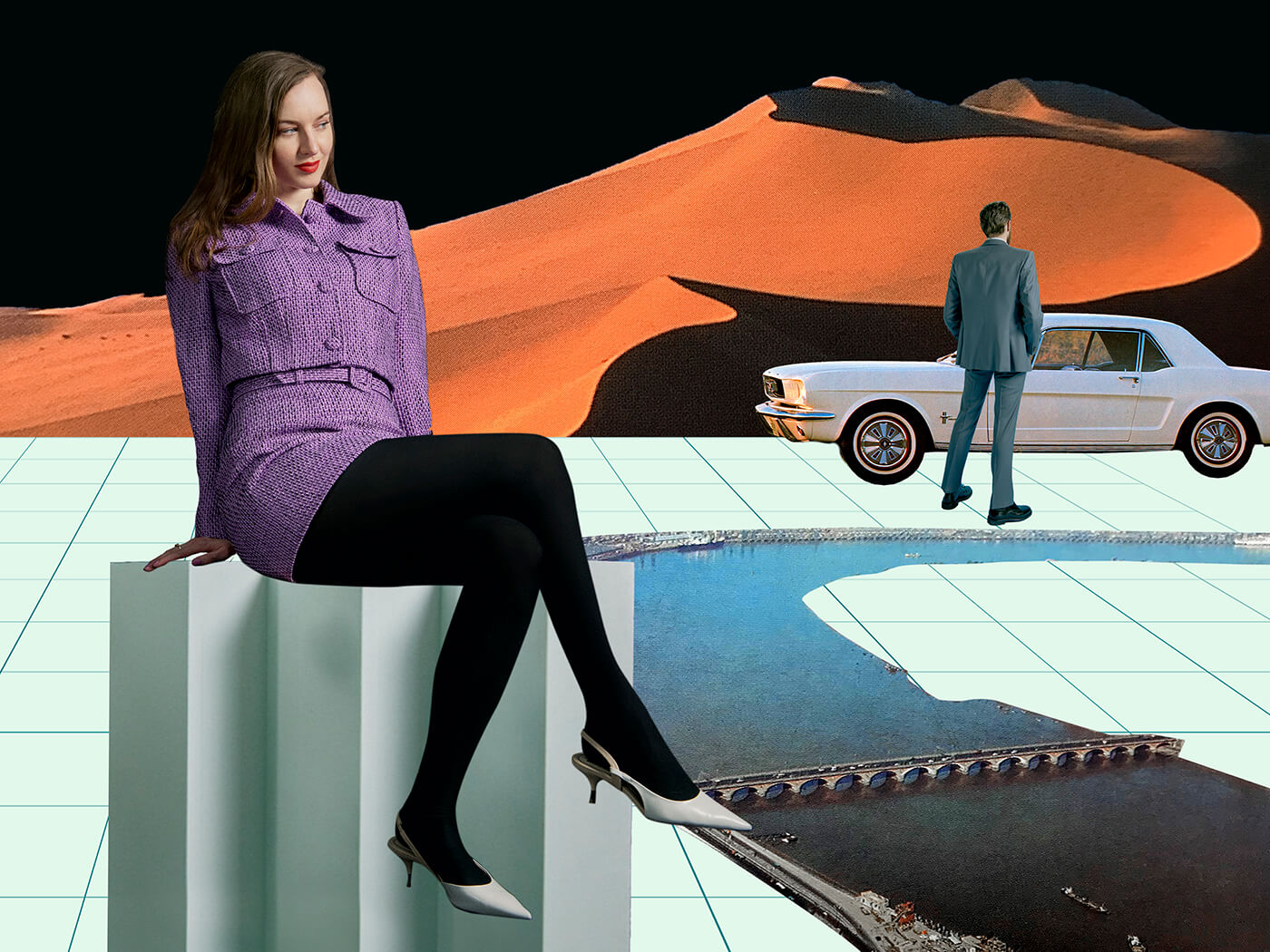 From catwalk soundtracks to working with Air’s JB Dunckel, DJ, musician and artist Lou Hayter has always hung out with the cooler creative kids. She may be an arbiter of good taste, but her imminent debut album Private Sunshine shows her musical talents are equally on point. The 10-song collection runs deep, drawing on her love of West Coast US harmonies, electro-pop and killer hooks; it’s a real affirmation of her artistry.

“You need to find your own sound however you can make it,” she says of her sonic explorations and adventures over the last ten years. “There are so many limitations in terms of buying gear or equipment. Just make music with whatever you have to hand and try to create the best thing you can.”

It’s advice Lou has followed ever since she became obsessed with music as a youth. She was raised on Prince, the Human League, Stock Aitken and Waterman, the Balearic synths of 808 State and The The, an inspiring collection of musical game-changers whose tunes she has fed into her own songwriting.

“I love the Jellybean-era of Madonna and the Shep Pettibone stuff that she made,” she remembers. “That’s what I grew up with, and I’m still inspired by it now. Some people have said my music sounds like early Madonna. That’s telling, as those were my most formative years and where my love of music comes from.”

This enduring fascination with a golden, groundbreaking era of pop is evident not only in her sound and aesthetic, but it’s even influenced the personnel on her debut album.

“I’ve had my record mixed by Dave Bascombe, who worked on all the big Tears for Fears albums and Peter Gabriel’s So,” Lou says. “He really felt like the right mixer for me and understood and liked my record. It was a real honour to have him involved.”

Private Sunshine is the finished record that will finally see the light of day on May 28th. Tracks like Cherry on Top, My Baby Just Cares for Me and Steely Dan cover Time Out of Mind are custom-built for the summer as a soundtrack to lying by a pool or cruising in your convertible. Despite the musical cohesion binding the songs together, the album was made almost as a side project between the other musical escapades Lou has enjoyed. Whether DJing, collaborating or touring, it’s meant there have often been lengthy gaps between recording and writing. But, in Lou’s eyes and ears, the finished product is all the better for it.

“When you’re independent, it’s harder to work with other people because you can’t always get in the studio, or they might be busy, so everything takes longer,” she says.

“It meant any time in the studio has always been minimal. At the same time, now I’m more confident and experienced, and I think it’s a better record for me having honed my sound.”

The album, due for release on Skint Records, is a bright and candy-coloured confection, nodding to a host of classic influences. Much of the record was produced by Martin Dubka, a fellow London-based creative that Lou first bonded with in the early 2000s.

“It was just through partying as we were both in bands,” she remembers. “I was looking for someone to work with, we’d been chatting, and we decided to go in the studio, and that was it – we clicked.

“We understand each other and work very quickly when we’re collaborating,” Lou continues. “He’s an incredible bassist as well, so if I write something, he’ll be able to play the bass part in about two takes. Whatever he does will sound great. He’s also got an amazing collection of analogue synths and drum machines.”

Lou’s musical process begins in her domestic setup. It’s here that she sketches out the skeletons of her ideas, then these are migrated to a bigger studio to add flesh to the bones.

“I have a very minimal home studio: my laptop, an Apogee Duet, and I bought a little Neumann TLM 102 condenser microphone during lockdown to record the outstanding vocals for the album at home. I also have a Roland Boutique Juno and a MIDI keyboard, that’s about it. I use Logic and have some Soundtoys plug-ins. It’s super minimal,” she says.

Lou’s equipment use in her home is pragmatic – she focuses on what comes out of the speakers, not the gear’s spec.

“I sample a lot, then often use whatever plug-ins I have to recreate that, then take it to a big studio to replicate it and record in analogue,” she explains. “Sometimes we keep the parts I made at home, sometimes we replace them. It’s a very DIY approach, but I find if I’m too bogged down in the technical, my idea suffers and can get lost.”

Producer Martin Dubka is very much a gearhead armed with a colossal synth collection in which Lou can immerse herself. His passion for synths, circuitry and wires has played a large part in helping bring the record to life.

“I fell in love with the Oberheim OB-Xa on this album; I was always pulling that out to use. I love the Sequential Circuits DrumTraks drum machine as well as the Roland SH-101,” she states.

Despite a passion for vintage machines, Lou doesn’t stick rigidly to using them or allow them to stunt her creativity. Whether it be with hardware or software, she’s happy to experiment and go wherever her music takes her.

“I very much subscribe to the idea of the happy accident and loads of things have happened in the studio because of that,” she says. “But that’s also the same with modern plug-ins too. They all have a mind of their own; there will often be an accidental sound which I’ll be like, ‘wow, let’s keep that!’ With analogue synths, there’s a nice weight and depth to them. I find it interesting to use both.”

Private Sunshine, the album’s eponymous title track, was written and produced solely by Lou and is one of her favourites from the record. Its creation was typical of her process and magpie-like approach to finding sounds.

“The main chords and bass are with the free plug-ins you get with Logic. We didn’t replace them as they sounded so good. I’m not a snob at all. I play everything by ear and use what I like.”

Over the course of Lou’s career, her vocals have progressively moved to the fore. Cutting her musical teeth as keyboardist and backing singer with neon indie darlings, New Young Pony Club, she’s provided vocals for acts The New Sins and Tomorrow’s World, as well as with her solo venture. Each project has seen her pushing her musical vision ever further to centre stage.

“I haven’t got a really powerful voice, but vocal production is fascinating to me. You can create so many textures,” she explains.

“I’m a real fan of what you can do with your vocals, double-tracking, triple-tracking, if necessary – whatever you need to make it sound good, then you can dub it out and play with it like an instrument.”

“My producer, Martin, puts everything through this Eventide, then he’s got part of the original [API] desk they made Rumours by Fleetwood Mac on. It gives my vocals this really lovely warmth.”

Alongside her solo record, Lou has also been busy working on new material with Tomorrow’s World, the group she formed with former Air member JB Dunckel. She and Dunckel connected when she was in New Young Pony Club after her friend Alex Thomas played drums with Air.

“JB came to one of my New Young Pony Club gigs in Paris with Jarvis Cocker, they both watched our gig, and I was terrified,” Lou says. “Then I went to JB’s house the next day, listened to loads of music, realised we were both on the same page and just went into the studio after that. Everything happened so quickly. We ended up making an album.”

The Tomorrow’s World records were recorded in Air’s Studio Atlas base in Paris. As you might expect from an iconic electronic act, they have a vast and beautiful collection of classic synths and drum machines.

“Being in the studio with JB is like watching the master at work,” says Lou. “If we start writing a track in the morning, then he’ll have finished it by that evening. We might spend a maximum of three days on a tune which is crazy fast compared to some people. He’s in at 10am, leaves his phone outside the studio and just works. He’s incredible, just watching what he does.”

Lou believes that her ability to collaborate with so many different artists and bands has stood her and her music in good stead, helping push her to work harder on her solo ventures.

“Every time you go in the studio with someone, you’re learning,” she states. “Everyone has their own approach and works differently so you can pick up new tips and ways of working.”

“It’s been an exciting path as I’m an amateur musician. I just use my ear and obsession with music, so I understand what I want to do and how I want it to sound.”

With the record completed during lockdown, Lou has had time to devote to putting the final touches to her own material as well as tuning into as many new inspirations as possible.

“I love how UK jazz is really coming back at the moment. When I grew up, I loved listening to Gilles Peterson on the radio, and I still listen to him now. That whole scene is huge now; that’s really exciting.”

With so many experiences to call on, Lou has had to stay focused to keep her creative vision on course. What would she advise any aspiring bedroom producers and songwriters?

“Trust yourself and only take advice from people you really trust. There have been times when I’ve been put off by working on something by other people’s opinions,” she says.

For her, finding trusted mentors has been key. But Lou is also keen on listening to the greats and learning from them.

“For me, I love listening to producers such as Trevor Horn, The Neptunes, Quincy Jones, Jam and Lewis, Rodney Jerkins, Arif Mardin. Then working out how they did it.”

Private Sunshine is out on May 28 on Skint Records. Pre-save the album and listen to the single Telephone here.