The film composer, orchestrator and DJ shares career advice and unpacks the score she created for Underplayed, a new documentary that unveils the sexism that resides in electronic music cultures. 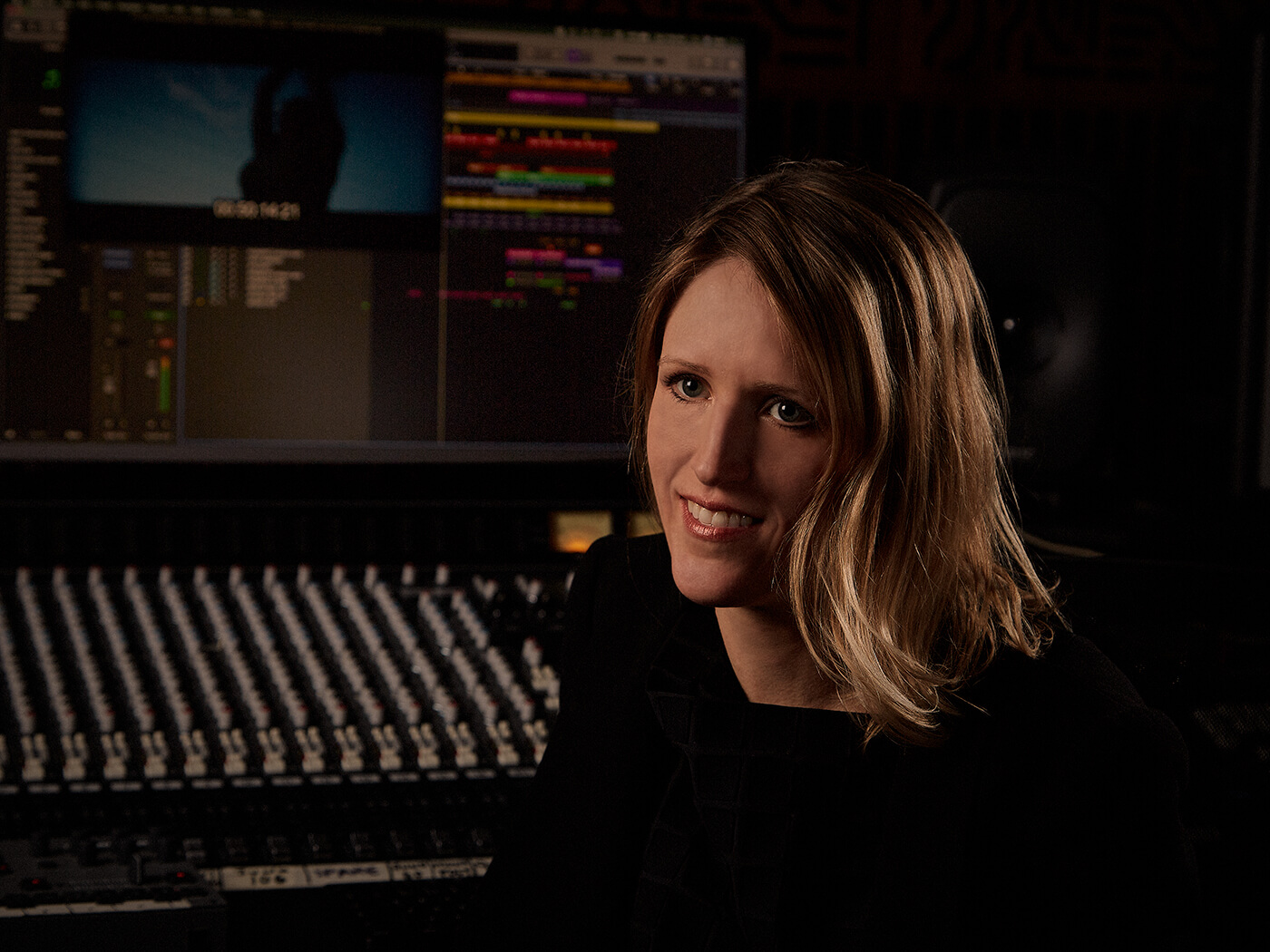 Underplayed is a moving new documentary that celebrates women in electronic music and shines a light on the sexism they experience. And the film’s score is a testament to the unique voice of its composer: Chicago-raised, London-based composer, arranger and DJ, Kate Simko.

Inaugurated as a Professor in Composition for Screen at the Royal College of Music last year, Simko often walks a tightrope between two worlds: on one side is academia and classical precision, and on the other is electronic music’s boundless possibilities.

Her other credits include founding the London Electronic Orchestra and scoring for Netflix, PBS and BBC productions. She’s gained a wealth of knowledge over the years, working as an internationally touring DJ. Consequently, this makes Simko the perfect fit to compose, record and mix Underplayed’s score.

In the film, Simko uses her score to smooth the creases between the variety of dance sub-genres it represents, doing so without ever overpowering the artists’ stories. Instead, she enhances the emotion within those stories.

Simko unpacks her approach to making Underplayed’s score, explains her roots in wordless music as an emotive means of communication, and gives her advice to aspiring film composers.

When approached to score Underplayed, the film’s vast scope of dance subgenres proved a major drawcard for Simko. “I really wanted to work on this score because I wanted to create electronic music that wasn’t pigeonholed,” she tells us over Zoom. “It wasn’t a techno score; it’s not an EDM score – it’s not any genre of electronic music.”

Asked how Simko began to tie such a vast breadth of genres together, she explains, “I had in my mind: the beats are what [separate] the subgenres, aren’t they? You’ll know immediately: ‘that’s techno, that’s house, that’s bass music’ just by the structure of the beats.” So, this is where she focused most of her energy.

Simko created “a palette of sounds.” She adds, “I started recording and seeking out new sounds, and so I bought a couple of new software synths.” Among these purchases were Serum and Vacuum, known for their place among the “more epic” EDM mixes.

The film composer specialises in composing and recording orchestral arrangements; in fact, she moved to London in 2014 to further her skills in this area, completing a Masters in Composition for Screen at the Royal College of Music.

“Usually, I record a few live instruments, but that didn’t feel appropriate for this score,” says Simko.

Instead of relying on stringed instruments to capture the emotion behind the stories of the women featured in Underplayed, she leant on her sound palettes. “I spent a lot of time on [the structure of the beats], and figuring out the sonic world where I was comfortable and [making sure] I liked it, but alongside an artist that I have a very different sound [to],” she says.

When asked what aspects of the score sat within her own world, Simko says, “My production style and taste in electronic music is a more analogue, raw and organic sound. I’m drawn to warm vintage synths and classic Roland drum machines. That said, the lush aspects of the score, as well as the intentional gritty textures, are from my personal taste and sonic world.”

If you delve into the depths of Simko’s sonic world, you’ll discover she thrives in the low-end. “I love adding low, deep and sometimes gritty sub-bass to my music. These frequencies can allow a more subconscious transmission of emotion and bring another level of depth to a lot of film music cues,” she says. Simko used “plug-ins like Soundtoys’ Devil-Loc Deluxe to create more depth and texture” where it was needed.

As for go-to the gear she used to channel these textures, she deferred to a modern classic: “My studio partner’s Moog One synthesizer tied things together with incredible bass textures.”

Since Simko was scoring for such a wide, impressive array of talent, we suspected it might have been tempting to emulate some of the artists’ setups. But she found it paid to let the score have its own voice, tech-wise. “I didn’t have the urge to mimic the setups of the artists in the film – I wanted the score to have its own identity and flow from one artist to the next as seamlessly as possible,” she tells us.

With these adaptions to scoring – such as leaning into synth software and taking a breather from recording live instruments – came another transformation to Simko’s process. “The main change to my workflow was putting the FabFilter Pro-Q 3 [EQ plug-in] on every track. Sometimes I didn’t need it, so it wasn’t used, but I looked at every single track with it to check the frequencies and make sure I wasn’t including anything unneeded.

“This made exporting the stems a lot easier, and the stem mixes that came back weren’t altered that much. Basically, I was mixing with the EQ as I was composing on this soundtrack – and that’s a new process I plan to stick with!”

From DJ to film composer

Simko’s score is intricate and often hypnotic, while careful never to overpower or interfere with what the artists have to say. Documentaries often aspire to truth-telling, and Simko’s score is masterful in that it often captures an emotional truth behind what these women have to say. That should come as no surprise given her long history of using music as an outlet to commune with audiences.

Simko has DJ’d all over the States and Europe, opening for the likes of deadmau5. She was named one of Chicago’s top 10 DJ’s in XLR8R magazine. “DJing is a way of communicating with a group of people – it’s non-verbal communication,” she explains.

She’s been developing the art of conducting mood and emotion via wordless music since childhood. Since the age of five, she’s played the piano, and her father’s love of classical music helped her learn how to listen, she tells us. “The music wasn’t just wallpaper,” she says.

Simko began her ascent in DJing at WNUR radio station in the late 90s. She soon moved into a music director position, a role that involved pursuing Chicago’s record stores searching for various dance subgenres.

She says of living in Chicago in the 90s: “Electronic music was just such a magical new genre at the time because it was just totally open-ended and there was nothing for the music to hide behind. The music had to tell the story – there were no words to tell you the story most of the time, you know?”

When asked what advice she’d give to women who’d like to compose film scores, for Simko, competence and confidence are critical. “If somebody wants to get into film scoring, find the best place – whatever that is: whether that’s online or through a university or with an orchestra, whatever – and make a plan as to how you’re going to learn the skills. Because there are multi-level skills of film scoring,” she explains.

For aspiring composers, these skills could include learning how to dissect and rearrange diverse genres through to recording and arranging music for an entire orchestra.

“For me, I moved to London to get my masters because I just realised that [filmmakers] love to be able to record and have strings and live orchestral sounds.” Simko has dedicated decades of her life to finding her niche and refining her skills.

Simko also warns against jumping in the deep-end too soon. “My advice would be to just really make sure that you put in the time to learn your skills, and don’t put yourself out there, in any aspect of the music industry, until you’ve developed a certain level where you’re comfortable.”

Her advice is reminiscent of a scene in Underplayed, where the mother of producer Rezz recalls her daughter’s decision to spend roughly two years in their basement just experimenting with sound.

“Figure out what skills you want for your sound and how you’re going to achieve them,” adds Simko, “and then I would just really get on that path and put yourself out there once you feel like you have a good grasp of them. Once you’re on top of it and you’re like, ‘I got this’ – that would be it.”

The Underplayed soundtrack is out now on Lakeshore Records.

Underplayed is available to stream now on Amazon Prime Video.