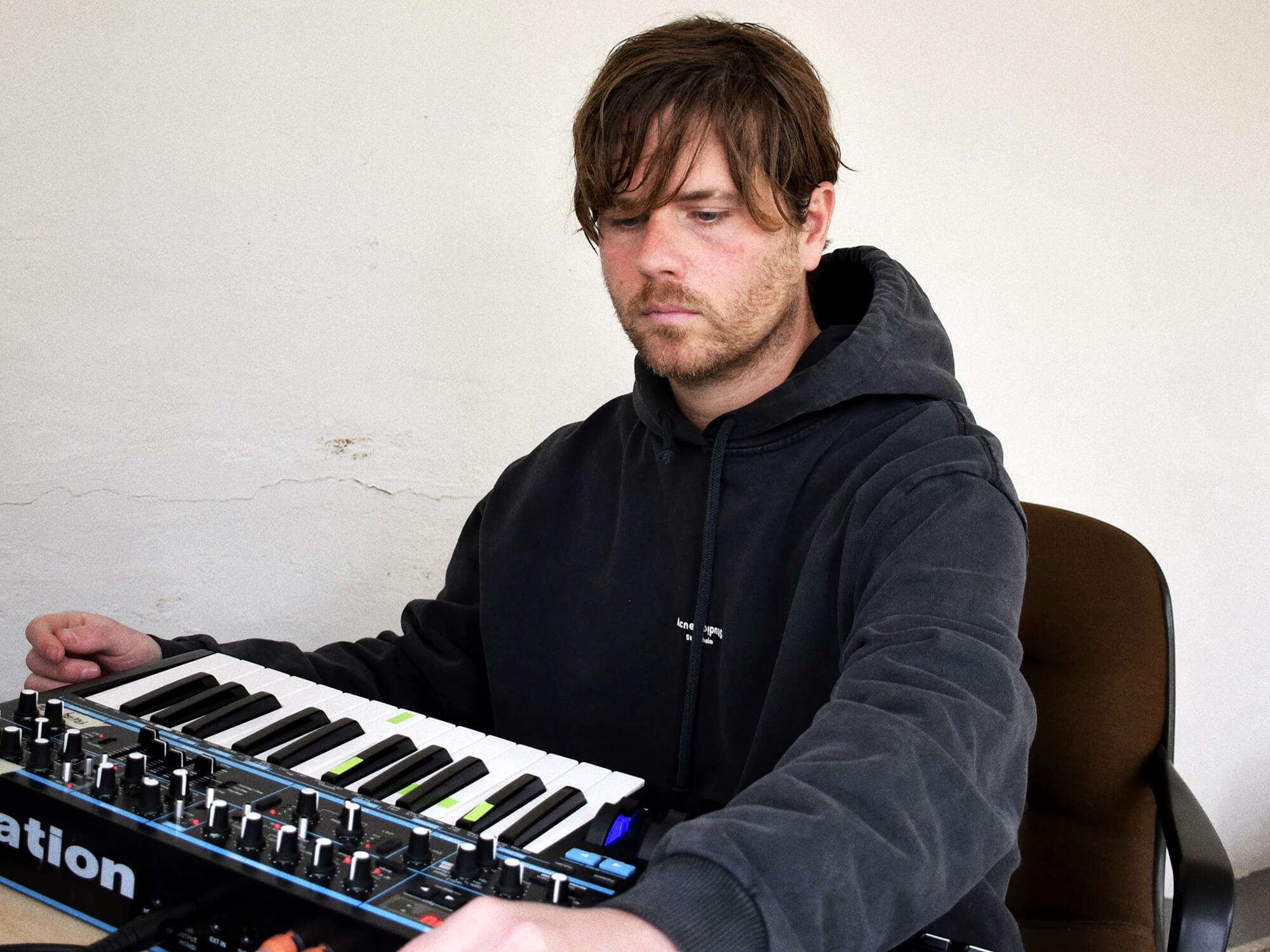 Kasztan on working with M83 and marrying techno with post-rock: “Everyone has their own path but working and writing every day is key”

Pierre-Marie Maulini has travelled a unique musical road. We get to grips with his latest project, Kasztan, and his experimental techno EP Celeste.

“I’m coming from the world of post-rock so I love dramatic build-ups. That’s what techno and post-rock share. They both create this distinct and dynamic musical landscape.”

Musician, artist and visual composer Pierre-Marie Maulini is contemplating his restless quest to conquer new musical worlds. Currently residing in Paris and working under the alias Kasztan, he’s spent years flitting between his home country and the sun-kissed climes of Los Angeles, all the while flirting with myriad sonic shapes and forms.

From his early days as a guitar slinger in post-rock band A Red Season Shade to his Sony Music-signed project STAL and compositions for visual projects and remixing, Pierre-Marie’s creative mojo spins around endless reinvention. His latest guise, Kasztan, was born out of the COVID-19 lockdowns and sees him turn his music on its head to take it in a tougher techno-sounding direction.

“When I moved to LA, I felt completely free and spent almost 10 years working and recording as STAL,” he says. “I loved it and did a lot of experimenting – it was a good mix of anthemic rock music with electronic touches. With Kasztan, it’s the opposite. It’s more electronic textures with guitars.”

Pierre-Marie started his musical experiments almost by accident after hearing the early work of punk groups such as Blink-182. After a friend returned from California, inspired and clutching their records, the wheels were set in motion to come together and write songs without any kind of master plan.

“I was in college and my friend came in with this Blink-182 tape,” he says, with a laugh, of his inauspicious beginnings. “I was like, ‘Okay, what is this?’ I wasn’t a musician at all but we decided to start a band. We thought it would make us seem cool and get us more friends.”

The stripped-back sound of punk rock brought their initial experiments to life but it was exposure to the otherworldly sounds of Iceland’s Sigur Rós that flung the doors open on their musicality.

“The real moment for me on my musical journey was hearing some of the first tracks from Sigur Rós,” he says. “It really changed how I listened to music and made me want to start a band with my brother. It was completely experimental and sounded so new at the time that we formed A Red Season Shade.”

The band dug into the world of post-rock, finding inspiration in the likes of the colossal melodies, drones and feedback of Mogwai and Godspeed You! Black Emperor. Pierre-Marie began the group towards the end of his time in high school and hit the road, touring extensively around Europe.

“A Red Season Shade started in 2003 after we asked two friends from high school to join us,” he says. “We did these DIY tours around Europe, playing in squats and various venues. It was new for a French band to play post-rock at the time and a great experience for me.”

Hailing from Nice in the south of France, Pierre-Marie’s hometown left him wanting more stimulation from his musical life than it initially seemed capable of offering. According to Pierre, unlike more fertile scenes in Paris or the west of France around Brittany, this part of the country was not renowned for its bleeding-edge musical output. Coincidentally, Pierre-Marie and his bandmates discovered that M83’s Anthony Gonzalez was from the small town of Antibes near Nice. It inspired them to track down their musical peer.

“We were on tour with A Red Season Shade in the Netherlands and heard his music in a bar and loved it, then decided to get in touch with him,” says Pierre-Marie. “We found him on MySpace, discovered he was from near where we were and tracked him down. After we met, we hit it off and he asked me to join the band in 2008. I played a few synths and provided backing vocals but my main job was to play guitar.”

Pierre-Marie’s role in the band allowed for plenty of musical freedom, including reworking certain sections of tracks for the M83 live show. These were his first steps into the world of electronic music, where he spent two years travelling the world as part of the Saturdays = Youth tour.

“Except for a few records from the likes of Kruder and Dorfmeister, I was more into trip-hop,” he says. “But the more I became involved in M83, the more I fell in love with electronica. I bought my first MacBook Pro and started to play with computers – it’s all grown from there.”

After touring came to an end, Pierre-Marie almost immediately started working on his own electro-pop project, STAL.

In 2012, he released his debut EP We Are Two, and signed his 2015 debut album, Young Hearts, with Arista/Sony Music. In the wake of these more commercial projects, he’s chosen to pursue a darker sound as Kasztan – and this new identity suits him and his music. The project came out of lockdown when he was forced to experiment on his own due to the restrictions.

“I was stuck in France and wanted to work on a new style of music,” Pierre-Marie says. “I couldn’t play with my mates or go to the studio, which was frustrating, so I decided to try something new just for fun. I thought it started sounding good enough to take further. There was no direct motivation other than using my time as I was locked down at home.”

From his stunning debut EP, 2021’s Rare Earth Elements, to his forthcoming release Celeste, the polished production and mixture of eclectic beats and ambient electronics belies the simplicity of his technical setup.

A guitar, effects pedals for his synths, and a Novation Bass station are the heart of his setup, alongside Ableton Live and his penchant for delays, reverb and distortion. It helps ensure his music is not only cinematic in scope but bursting with melodies.

“I build tracks layer by layer, then return to them and edit,” Pierre-Marie says of his creative process. “It’s still evolving and I’m going increasingly into intricate beats and breakbeats. I compose quickly and write a large amount of music each month; that’s the key.”

Rather than a huge studio, Pierre-Marie’s setup is minimal due to the confines of space in his Parisian home. But this isn’t something he views as detrimental to the sounds he conjures.

“I have this ability to work well anywhere, even if it’s in a small space,” he says. “As long as I’ve got a table, I can work for hours. I don’t need the perfect environment to create great sounds in.”

Pierre-Marie’s setup is based around his laptop and Ableton Live. But he still considers certain classic hardware, such as the Roland SH-101.

“I’d like some more analogue gear but, at the same time, I’m happy working on computers,” he explains. “I’ve never been mad about hardware and think it sounds just as good when you’re working in-the-box.”

While his Kasztan project is picking up pace, Pierre-Marie has been busy writing music for more commercial projects too. Working with a publisher has meant he has acquired an extra stream of creativity and income to navigate.

“I work mainly on commercials and it can be challenging,” he says. “Usually you have to work to tight deadlines, getting the brief in the afternoon with submission due the next day. But it can be a great musical exercise. You have to switch off your ego and give the people who hired you what they want.”

Alongside ads, Pierre-Marie was behind the music for The Illusionists, a 2015 documentary about the commodification of the body and the beauty industry. This saw him flex a slightly different creative muscle than he does on his commercial projects.

“This is a different approach. I work closely with the director and there’s a big element of trust involved in the process,” he says. “Working in this format is interesting and I like exploring different worlds. Sometimes the commercials pay great money but I can’t just do ads all the time. I need my own projects.”

With more Kasztan music in the pipeline and potential scoring work up his sleeve, Pierre-Marie’s future is intriguing. To him, much of his music is in an ongoing state of flux and shifting shape.

“My music is never finished. When I listen to old tracks, I’m always thinking about how they could be improved,” he says. “This applies more to the mixing side of my music than the composition. But I can mix a piece of music 100 times and never be satisfied.”

For new and emerging music composers, Pierre-Marie believes a mixture of hard work and mining for inspiration is the key to success. Unsurprisingly, he feels every artist has a unique musical journey to forge.

“Everyone has their own path to take but working and writing every day is key. Apply some rigour and structure to your day. It’s the best way to improve your skills and take your music to the next level.”

Visit Kasztan to find out more. You can also listen to his Celeste EP here.