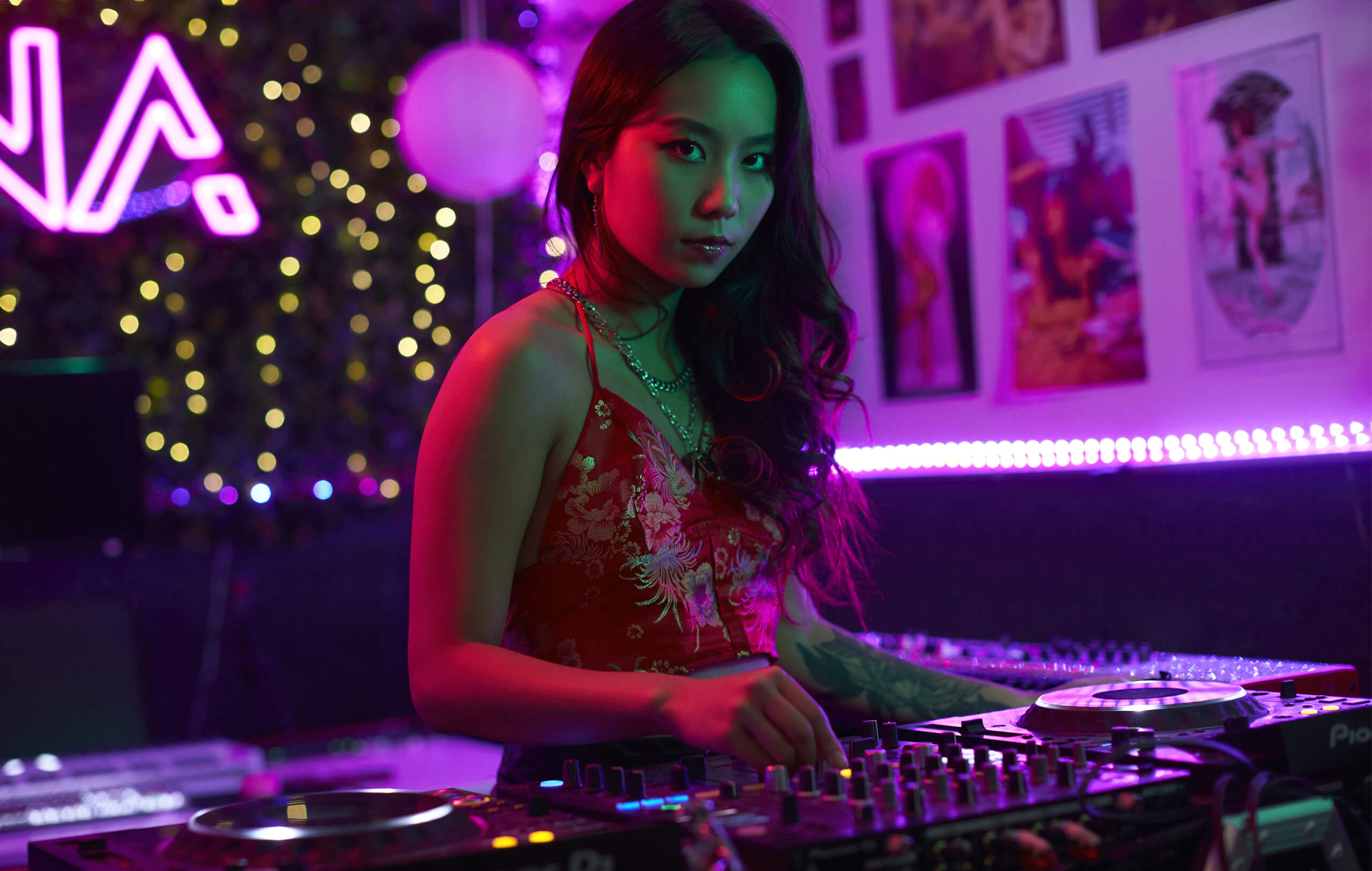 Twitch, Tekken and finding Hope In Chaos: how Jana Ma built an online empire one livestream at a time.

JVNA is taking back control. The Los Angeles-based DJ, singer and EDM producer already knows how to create high-energy madness at huge festivals, but now she’s getting on top of another crucial element of her artistry: independence.

“At the beginning of my career, I was getting mansplained to a lot by my team and my boyfriend,” says the future bass star, real name Jana Ma. “They all wanted the best for me. Maybe ‘mansplaining’ is an aggressive word, but they wanted me to pursue a path that was safer and more comfortable. But that wouldn’t have been me. I want to step out of my comfort zone to be a DJ that sings and performs.”

It’s a reorientation that builds on her previous successes. In 2019, she embarked on a sold-out tour across North America with Catch Me – a single that featured on the cover of Spotify’s Cratediggers playlist. This year, singles from her debut album, Hope In Chaos, have broken the million-streams milestone, and she’s now preparing for a 2022 headline tour.

JVNA’s ascendant popularity is built largely through her energetic Twitch streams and YouTube DJ sets, as well as her relatable lyrics that bring emotion and experience to the forefront. “I don’t want to be an artist if I can’t do what I want,” she says. “If there are rules, I’d rather do a 9-to-5.”

She’s avoided collaborations on her debut album for the same reason – so that no one can transfer the credit of her powerful EDM productions and lyrics to another artist. She writes and produces all the music, bar a co-writing credit on one track with Grammy-winning vocalist and songwriter Polina.

“I wanted to tell myself and the audience who I am. There’s no one telling me how I sound. No one can say another artist made it,” she says. Collabs aren’t off the table permanently, though: she teased an unreleased track with Adventure Club during her recent headlining sets at Sunset Music Festival and Electric Zoo NY.

Twitch was especially vital in JVNA’s early days. “It’s always been an outlet for me, as a small artist, to create a community,” she says. “I wasn’t getting booked for shows anywhere, so the only time I could DJ was livestreaming.

“No one would even let me play for free, so I’d just livestream it. I gained a very supportive fan base. It helped me gain a following and come to be a real artist with an agent and a manager, and I started to put my focus onto being a musician, not being an internet DJ.” She still checks into the platform at least once a week, though. “I appreciate where Twitch has brought me.”

She began writing the 12-track, independently-released Hope In Chaos in 2019, recording half of it in her old apartment and half in her new studio, using Ableton Live and a $400 AKG C214 mic. It’s been a lo-fi process, replacing a high-grade vocal booth with “a little closet; a cloth thing that I drape over my head”, JVNA tells us.

“My vocal processing style is already very dirty and wet. I didn’t need a clean recording. If I make pop music in the future, I want an isolated booth to get that clean sound. But for this sound, this aesthetic, it was a home set-up and lots of reverb.”

Jana Ma was six when she began learning piano, and she studied the instrument to degree level. In 2019, she graduated with a score and composition degree from the San Francisco Conservatory Of Music. She also absorbed a vast amount of melodic information through mainlining anime and video games during her high school years. She played the beautiful intro and outro on the album’s focus track Dystopia and flexed her playing skills on Sins’, on which she incorporated piano sounds in a unique way.

“I over-compressed and over-distorted the sound of the piano,” she says. “The drop is pretty atonal and detuned, and a lot of people commented they hadn’t heard that anywhere. At the end of the song, there’s a piano contrasting the heavier parts. I wanted to leave it with a peaceful, melodic outro.”

Her piano sounds are created within Ableton using Arturia’s Analogue Lab and Spectrasonics’ Omnisphere synths. In the middle of the pandemic, she invested in a Nord Electro 6D keyboard, which she’ll be using in DJ sets and live performance to better interact with the crowd, and which she used to create a Splice sample pack as another lockdown side project.

She learned her production skills in the time-honoured fashion of watching YouTube videos, including Lessons Of KSHMR – the short tutorials made by superstar producer/DJ KSHMR.

“Of course I use Auto-Tune,” she says with a beaming smile. “It’s my lord and saviour.”

JVNA is all about detail, particularly in her vocals. First, she records the dry vocal then processes it with Melodyne, loving the “super intuitive and detailed” opportunities it offers. “You can go into every note and fix it. It’s electronic music. Your voice is among all these synths that are robotic and unnatural. Even if you’re in pitch, it can sound off-key.”

Then she uses Antares Auto-Tune Pro and iZotope Neutron “to EQ out the low-end and compress it” before adding an exciter. “[The exciter] was a game-changer for me on this album. I can choose parts of a vocal frequency to saturate – I saturate a bit in 1kHz to 2kHz. After that, I de-ess it, and sometimes I’ll also put a de-esser before compressing it. Then I put reverb and delay.”

Saturation helps create the high-energy production she’s after. “Sometimes in EDM, the louder it is, the more energetic it is. I use my vocal when I’m making a drop, and if I distort it and saturate it enough, it sounds like a trumpet or a square wave synth. I use a plug-in called Faturator that makes my voice sound like it’s being blown into a tube. Anything in the high-frequencies will bring the energy, but you can overdo it. Too much and it’ll tire your ears. It’s a balance.”

Similarly, she’s evolved her own way of making a drop more dramatic, whilst maintaining a balance. “A lot of melodic bass producers’ bass is very compressed. It sounds like a block,” she says. “I’ve had friends come into my project and give me advice on how to mix it, and they tend to over-compress it. They want it to be very clean – ‘you can really feel the bass’ – but the highs sound square, in my opinion.”

JVNA usually has a heap of mini-melodies in her music: a guitar playing two notes, a vocal singing sustained notes and a bell layer that’s playing the same notes as the guitar. “That comes from a classical background. In an orchestra, a lot of things are doing their own thing, but added together, they make a sound,” she says. “I want you to be able to hear all of the elements. I care about it being beautiful – and that can still be in your face.”

Her sound is equally about energy and emotion, and her classical training helps with the latter. “I choose a melody that makes me feel like I’m on the verge of crying,” she says. It’s been an emotional time for Jana. Her father died in 2016, inspiring her 2018 song I’m With You and the long haul of bereavement runs through her music, as does the experience of living through a pandemic.

“The album is Hope In Chaos and, with the pandemic, we’ve all needed a bit of hope and chaos,” she says. “It’s staged in a sequence of overcoming grief; all of us coming out of this dark period. Hopefully, my album will help people relate to everything we’ve just been through.”

JVNA opened the doors to success by making edits and remixes of her favourite anime and video game soundtracks and posting them online. Her 2017 version of MapleStory’s Login Theme gained half a million views in just 24 hours, and the influence of years listening to that music is still evident in her sound.

“I listened to Hiroyuki Sawano and Joe Hisaishi a lot growing up. Even though I don’t actively listen to them anymore, you can clearly hear my melodic influences from them, especially in my writing. The prelude, Chaos and the interlude, Hope, sound like video game soundtracks or film scores. I plan to retain that in my music.”

For a long time, video game composers were unknown. Artists like Tekken sound director Kanako Kakino were far from household names. The 2014 documentary Diggin In The Carts addressed this, and things have changed a lot in the last decade. “[Video game composers] are just as respectable as any 18th-century composer,” JVNA says. “That’s where orchestral music thrives right now. An appreciation of classical music comes from gaming and movies – that’s where you see kids appreciating orchestra.”

“No one would even let me play for free, so I’d just livestream it on Twitch. It helped me gain a very supportive fan base”

JVNA’s transition hasn’t quite come full circle yet. She’s not ready to settle into the quieter work of scoring, although she has been approached to work on game and film music. “In the future, I will want to pursue it. When I was in college, we did internships at Sony PlayStation. Being in that work environment [made me] realise it wasn’t for me at the age of 22. It just didn’t seem as exciting as being on stage performing. That’s literally the only reason. I wanted to be on stage and go to concerts.”

JVNA’s videos are self-made, too. She’s actively involved as a co-producer, and her film background seeps into the music. “The song Breakdown came from a visual story I wanted to tell. I thought of a girl on a motorcycle, and produced it from the [perspective] of a girl riding a motorcycle. The song is about being in love with someone who makes you break down,” she says. “That’s how film scores have impacted the way I write.”

Jana is already thinking about the next JVNA album, although nothing’s been set in stone – she’s floating ideas and working out where to go next. “It would be cool to experiment with some indie sounds, and dive more into my classical background. Maybe even make a whole album inspired by the chords or the piano motifs of Debussy or Chopin and somehow make it EDM.”

Right now, though, she’s preparing for next year’s headline tour, mostly by working on her visuals and figuring out tech she hasn’t used before. “It’s an album tour,” she says, “so it’ll be important for me to evoke a certain storyline.” She cites K?D’s show as one that stuck in her memory – “his visuals are really detailed and his branding was very consistent” – alongside her friend and musical compatriot, Illenium. “His story was this phoenix that was flying through different things, and by the end, the phoenix turned into a person. It sounds boring, but it was beautiful and impactful. Simple is really good sometimes.”

“It’s an ambitious goal to do that on a smaller budget, but I’m going to try and tell the story of my hope and chaos,” she says. “I have to start thinking about if I want confetti.”

Confetti or no confetti, JVNA’s growing army of fans will be celebrating, that’s for sure.

Hope In Chaos is out now.