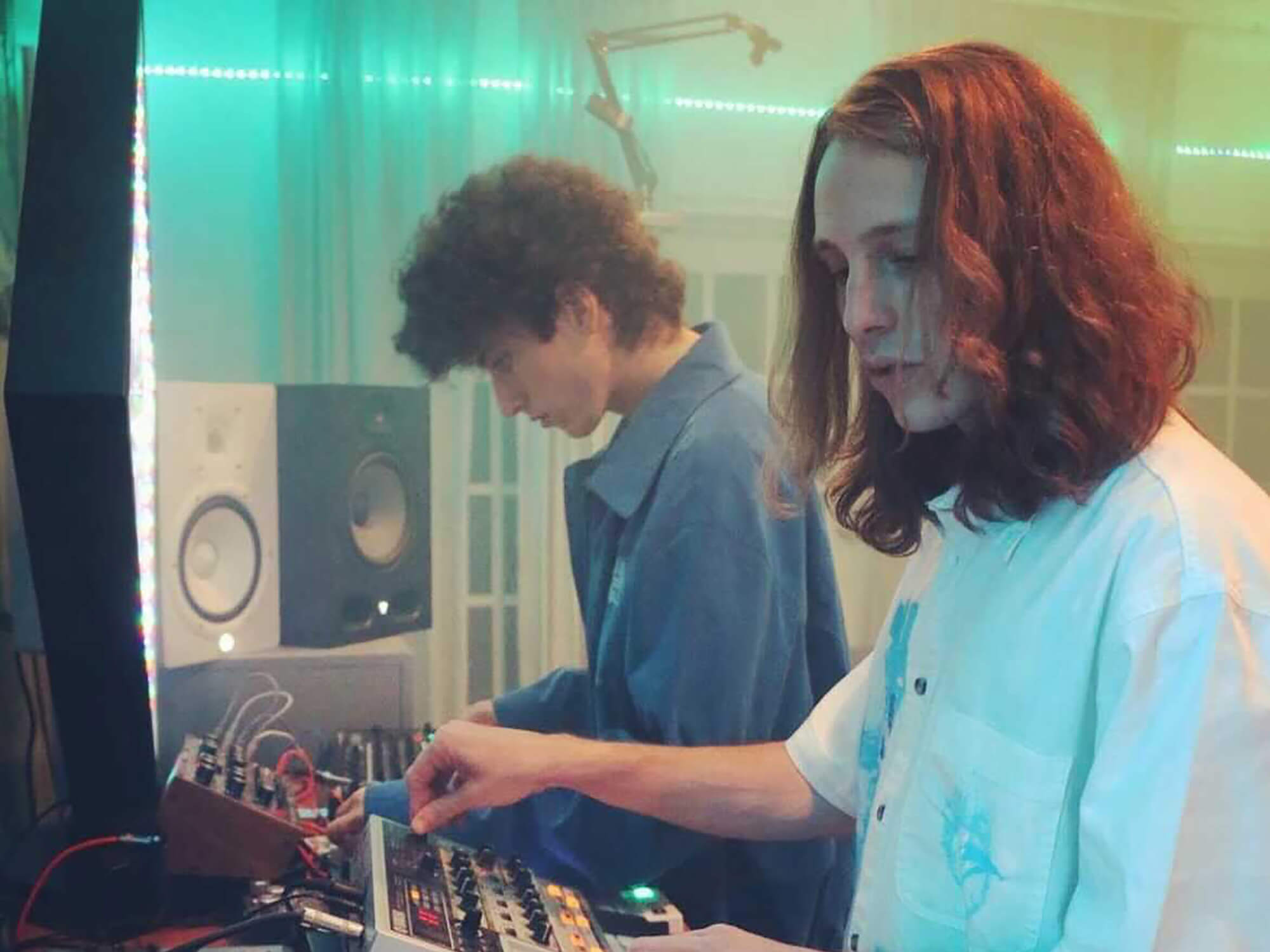 INVT and Skream on blending Latin beats with dubstep and garage: “If you’re going to play this game, try to figure out a way to play it right”

Dubstep legend Skream gives his stamp of approval to the ascending Miami outfit INVT for their innovative approach to production, visual design, and the music industry as a whole.

Delbert Perez just cancelled an Uber. He was supposed to be heading to dinner before DJing his first-ever gig in London, but he’s still waiting in his hotel room because Luca Medici, his partner in their music, clothing, and full-service creative project, INVT, (read as “Innovate”), is busy mastering a track.

Now Perez just cancelled a second Uber. This is not only his and Medici’s first-ever show in London, it’s their first European tour and they are DJing back-to-back with one of their idols: the dubstep pioneer and electronic music extraordinaire, Skream.

Meanwhile, Medici is still in the other room, mastering a track. Perez is heated at this point, but he doesn’t say anything to rush Medici through the process. 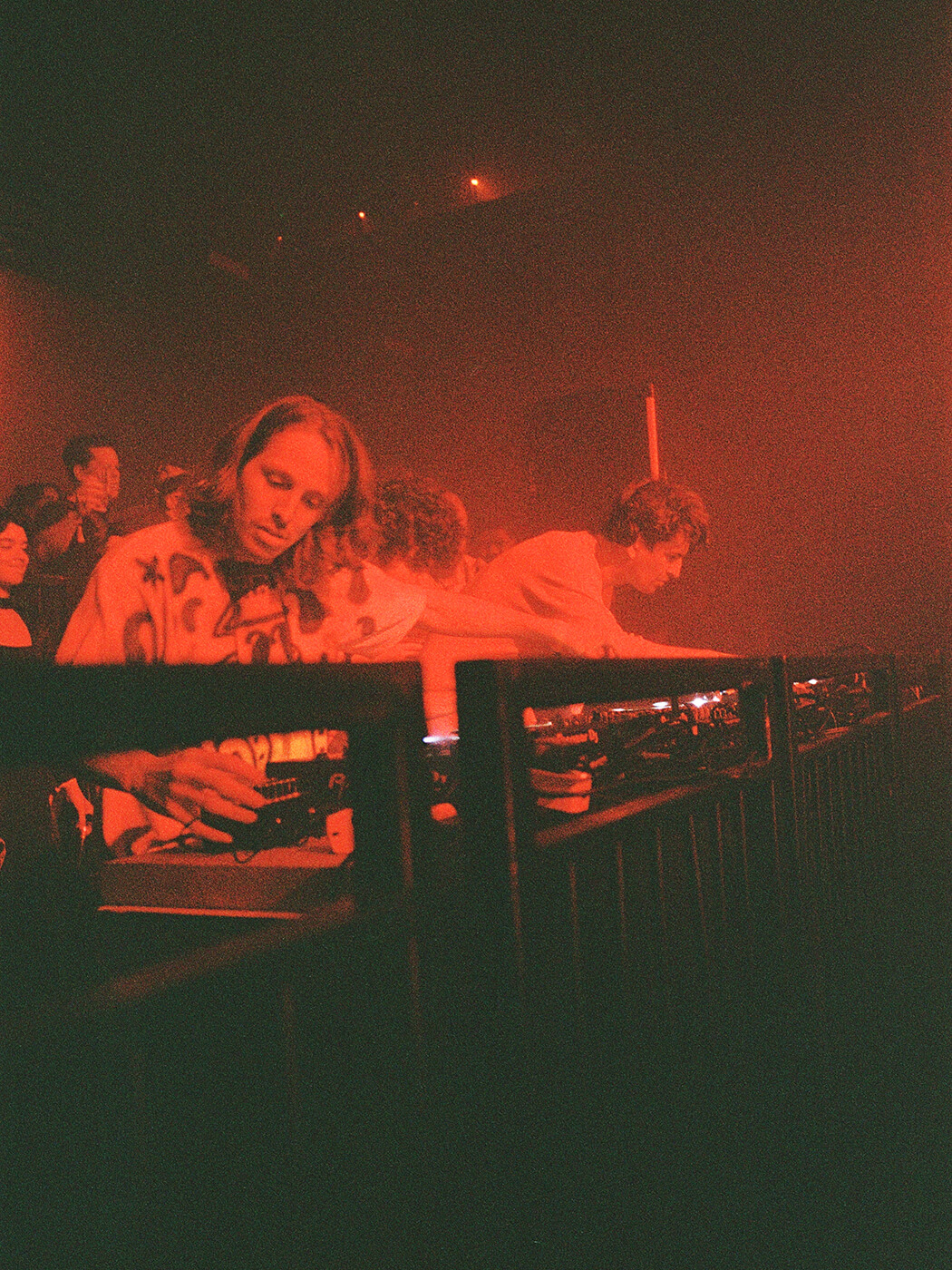 “I didn’t tell him shit because I feel him. We have to play this song. If not, the set is going to be completely different. Am I wrong?” Perez says turning to Medici, both of them now sitting side by side in the green room of London’s newly-remodelled club, KOKO. “Is that not how you felt while I cancelled two Ubers? ‘Hey sorry Delbert, this track is crazy. I have to play it.’”

With a nod Medici confirms Perez’s hypothesis. The two of them have been best friends since they were 11 years old. Today they’re both 24 and they know each other better than they know themselves.

The producers have lived together in Mexico City, New York, and Miami. Together, create music that is indistinguishable from prominent club genres such as breaks, garage, and dubstep, and Latin bass music like dembow, cumbia, and reggaeton. They design, embroider, screenprint, and sell their own line of clothing together. 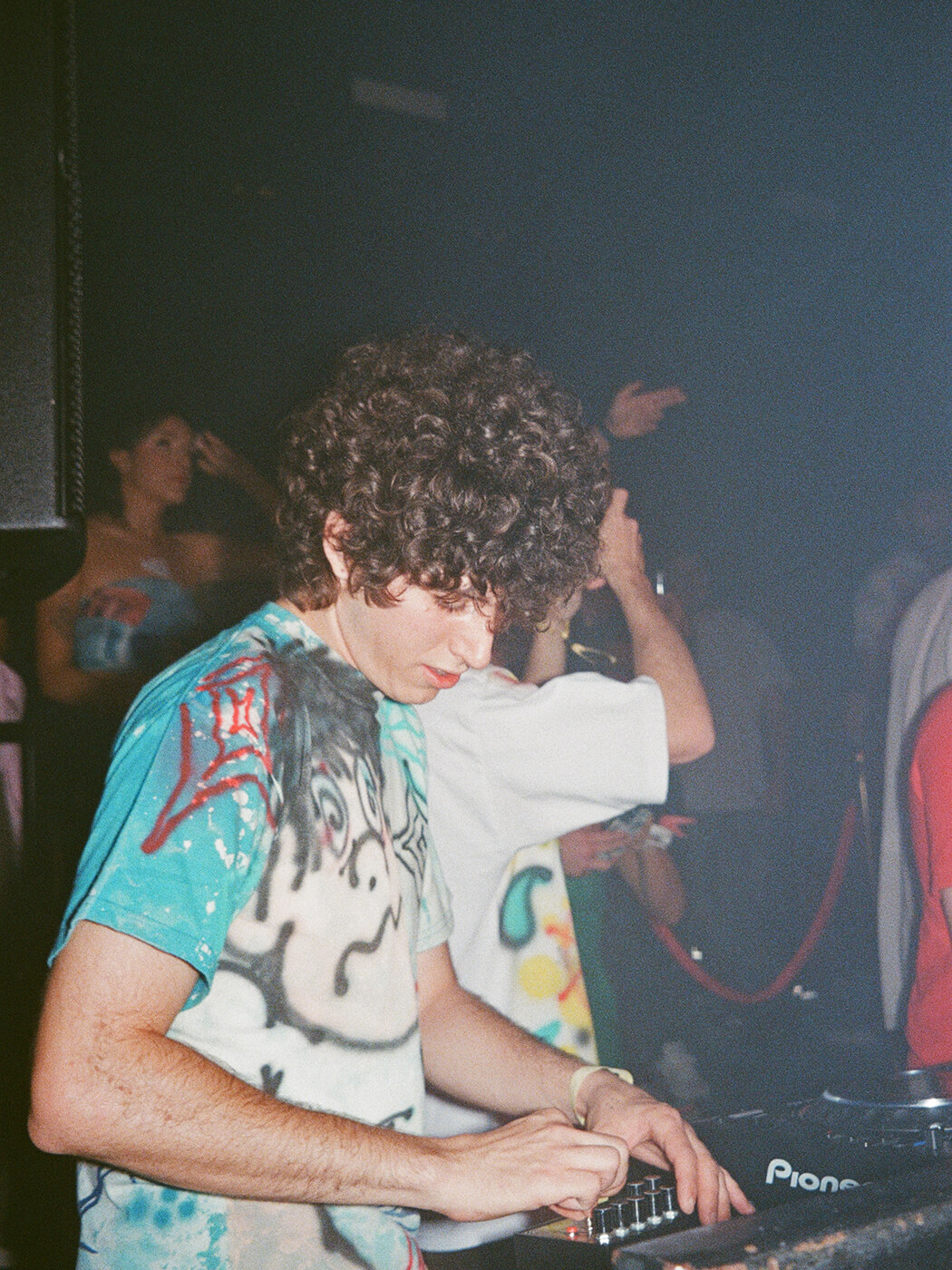 In short, they innovate together, and they’ve been doing so since they first met while skateboarding in the streets of their hometown, Miami. Almost immediately after connecting, they started making music. Medici had a drumset in his house, and he invited Perez, who had been studying viola at the time, to jam on bass guitar.

The two formed a rhythm section, playing in metal bands, and jazz bands. Soon, the rich music culture in Miami was assisting in their discovery of even more genres including dance music. In his preteen years, Medici was sneaking into the Fillmore to see Skrillex, and Perez celebrated his 14th birthday watching Amon Tobin.

By this point they were already experimenting with with electronic music, with London’s dubstep hero Skream as one of their main inspirations. They first heard Skrillex’s take on dubstep and resolved to do their homework, soon discovering Caspa, Rusko, Benga, Skream, and Coki. 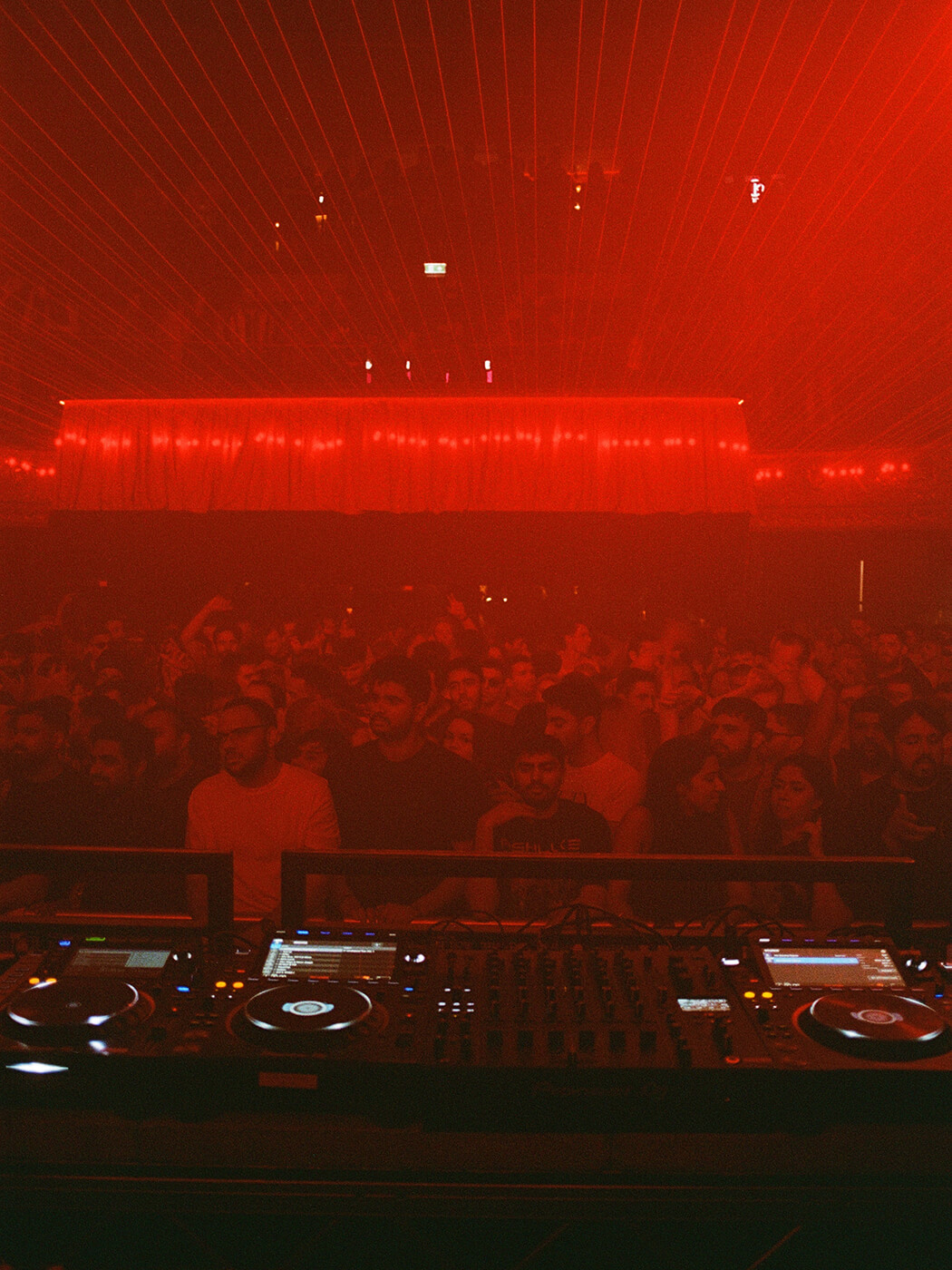 Now, after years of hard work, they are DJing in London because Skream, real name Oliver Jones, invited them to the first night of his residency, the night specifically geared towards garage, with artists like Plastician, RIZ LA TEEF, and DJ Q also on the bill.

Moreover, that hard work led to Jones putting out a tweet in February 2022 wherein he compares Medici and Perez to himself and Benga, undoubtedly one of the most legendary dubstep duos in history:

Had an hour long chat with @invt305
Am without a doubt there biggest fan…
It’s mental they remind me of me and @iambenga in the early years….Relentless beat making at its finest…: Deffo my fav producers by a mile atm

“We have moments where we feel like shit because we work so hard and put in so much energy into making next level music. Now the dude who executed the music that we love holds our music in such a high regard,” says Medici.

A few minutes after the interview begins, Jones rushes into the green room at the request of Medici. At first, Jones thought there was a problem – like he was being called into the principal’s office.

“It takes me back to school, right? Fuck!” Jones says with the cadence of a comedian, sparking laughter from everyone in the room.

But once Medici asks Jones to join the interview, he is immediately receptive.

“Anything you need while you’re here, you know that,” Jones says as he settles in between Perez and Medici.

Jones speaks about so much of the INVT project with candid praise. From their talent for knowing when to end tracks to their mixdowns, to the bespoke energy they’re bringing to club music.

“The initial energy, and I don’t mean energy as in tempo or anything like that because a lot of time when people say ‘energy’ they’re talking about hardcore because it’s fast. I don’t mean that. It’s the bounce,” says Jones. 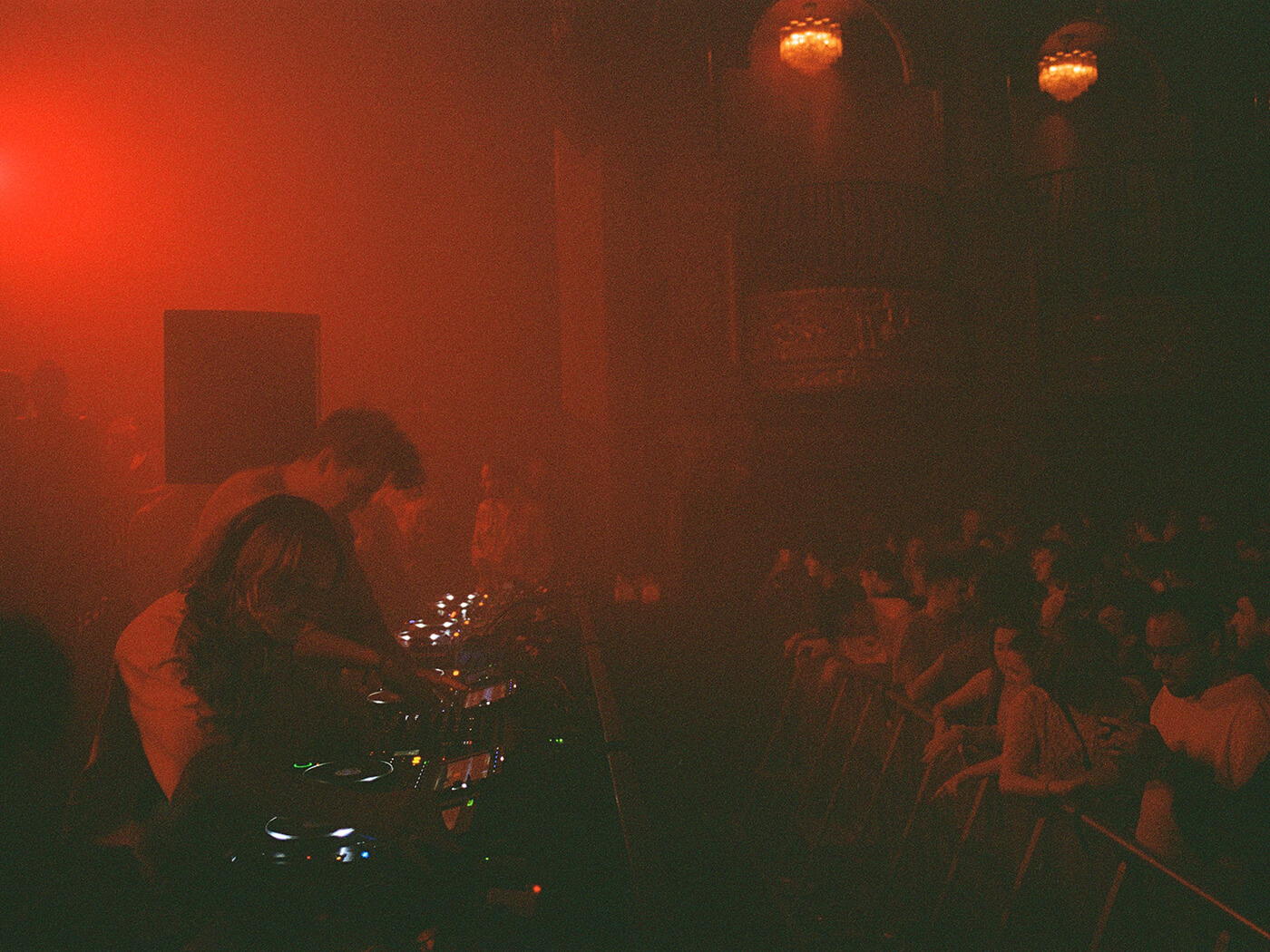 A key aspect of that bounce is the Latin influence that is inseparable from INVT. Medici was born in Montevideo, Uruguay, before moving to Miami when he was five. Perez was born in Miami as a first-generation American to two parents from Venezuela with a long history of family living there.

Even before they started the bands in Medici’s house, they would hear salsa, cumbia, merengue, and all forms of Latin music around their homes, and it naturally became a part of the INVT sound.

“We’re Latino kids that grew up on UK music,” says Medici. “Dubstep [and] garage has nothing to do with Cumbia. We just happen to be the connection between those styles because we like those styles.” 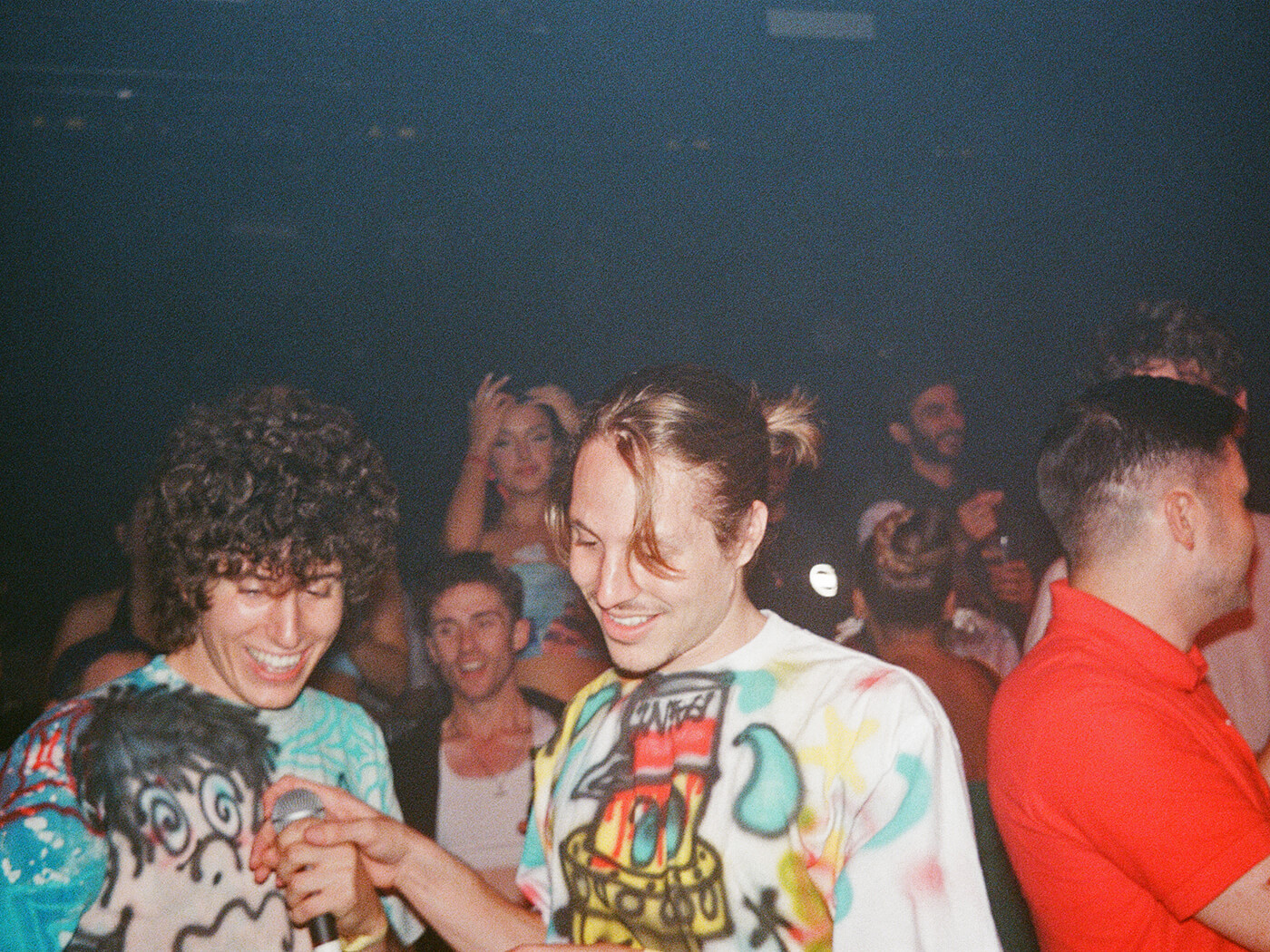 They enjoy connecting these styles so much that their output of music is constant and unending — another part of the project that caught Jones’ attention.

“I don’t need to get into how much they produce and make us all look like shit,” Jones says with kind fervour. “The full-on, balls out, slew of constant music. It just reminds me of when me and [Benga] would, not overthinking nothing, boom! Tune done. Out.”

Before the second half of 2022, Medici and Perez have already released two albums and an EP. In 2021, they released six albums, one EP, and a single. 62 tracks total, which doesn’t even scratch the surface of how many tracks they actually produce. 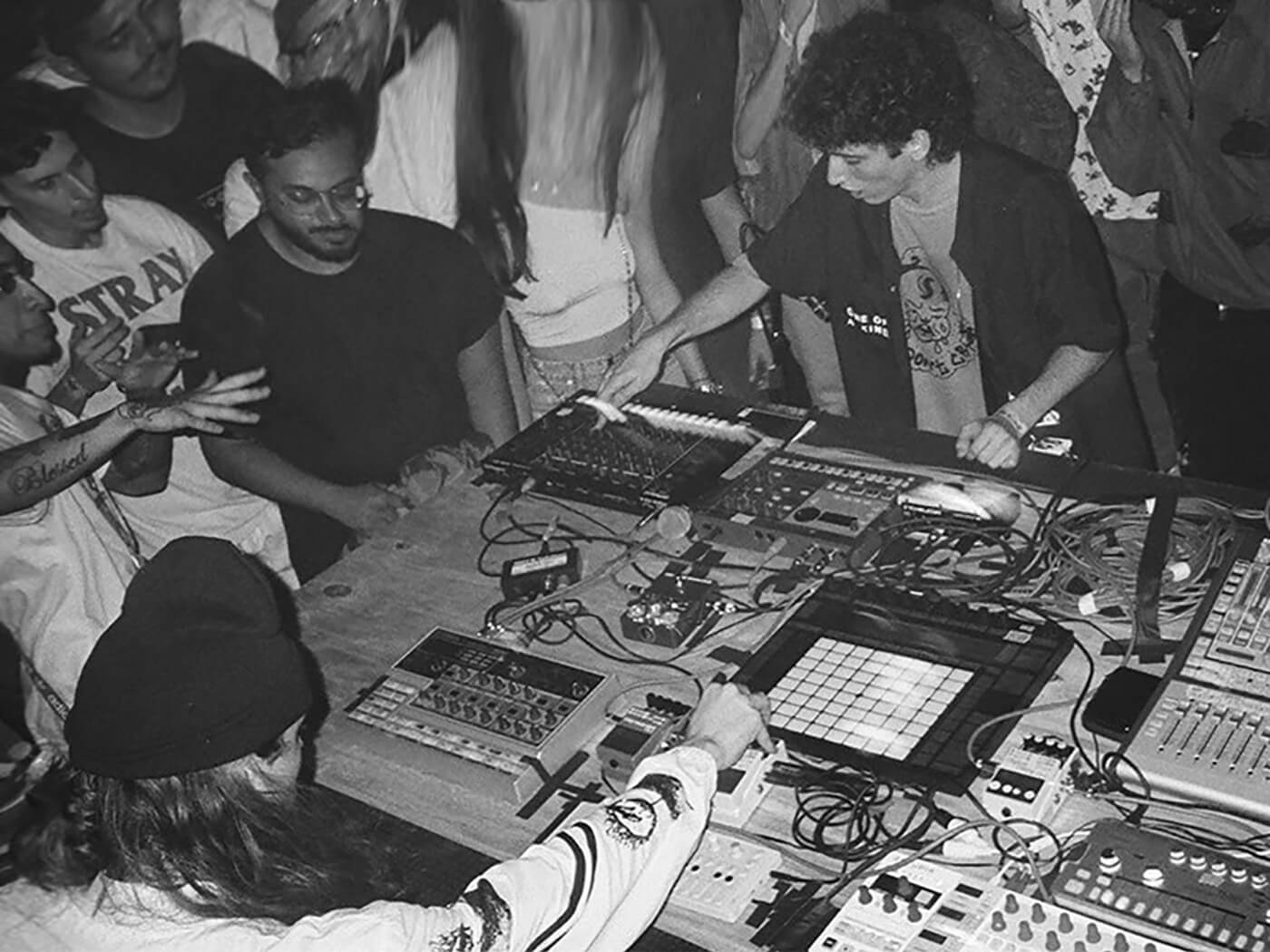 “We make thousands of tracks,” says Medici, and they use a wide selection of different gear to help accomplish this impressive statistic.

In their studio, they have an Ableton Push for Ableton Live, two Roland TR-8s that they also use for their live sets, and much more. Sometimes they even produce on their phones using the Koala Sampler.

And yet while these elements of the INVT project reminded Jones of himself and Benga, Jones elucidates that Perez and Medici aren’t bound to that comparison. He wants them to be recognized for their individual talent and creativity. 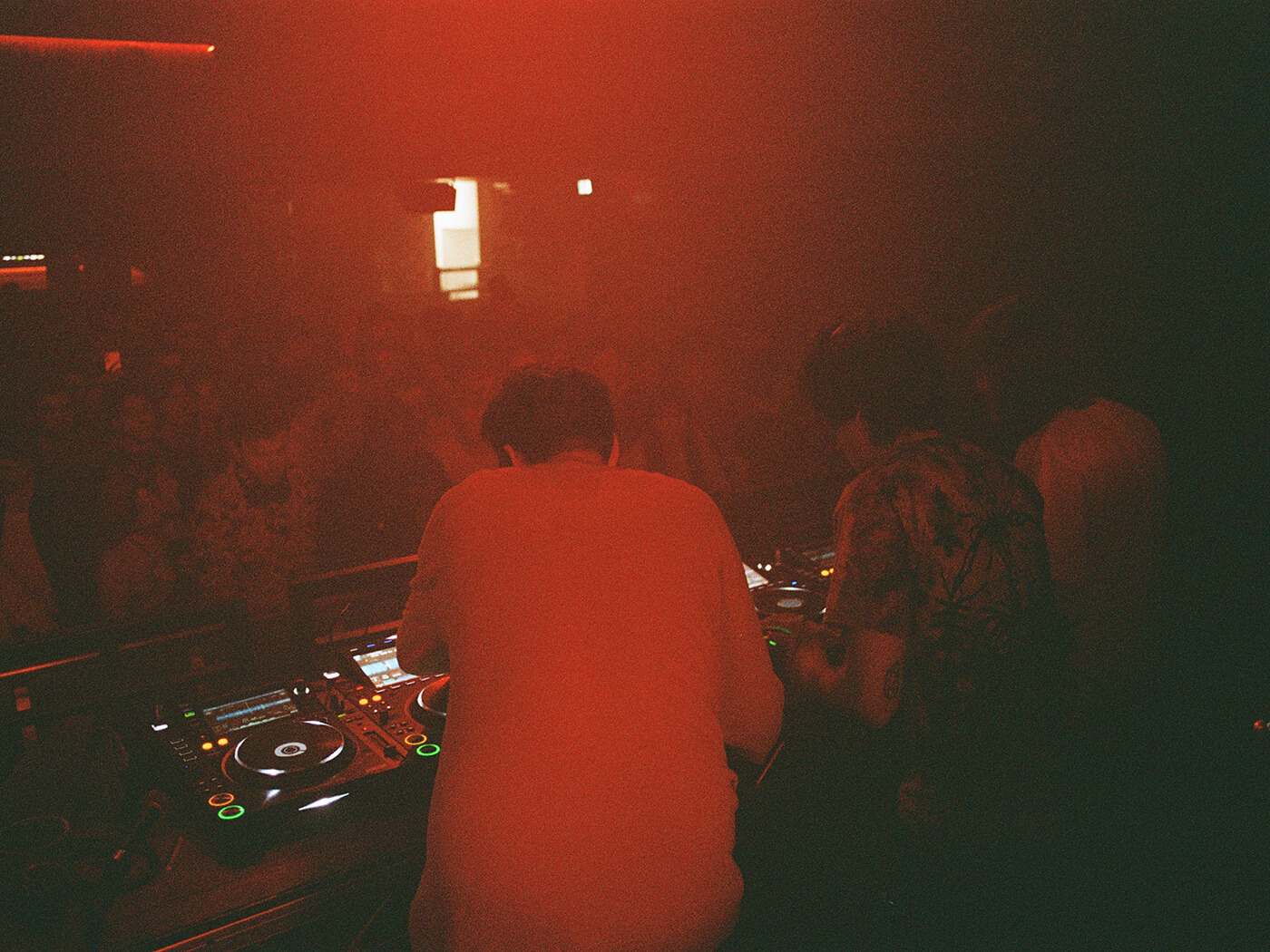 “That quote is irrelevant to what they’re doing,” says Jones of his tweet. “You see people change their identity all the time. These lot have got their identity which is a hard thing to find.”

Theirs is an identity of innovation, and that identity goes deeper than the music and the clothing. It goes into their intention to innovate the entire industry.

And they know what it takes to deliver that kind of industry, because that’s what they’ve built for themselves. Medici and Perez have been independent throughout almost the entire history of INVT. They release their own music. They manage themselves. They negotiate their own deals. 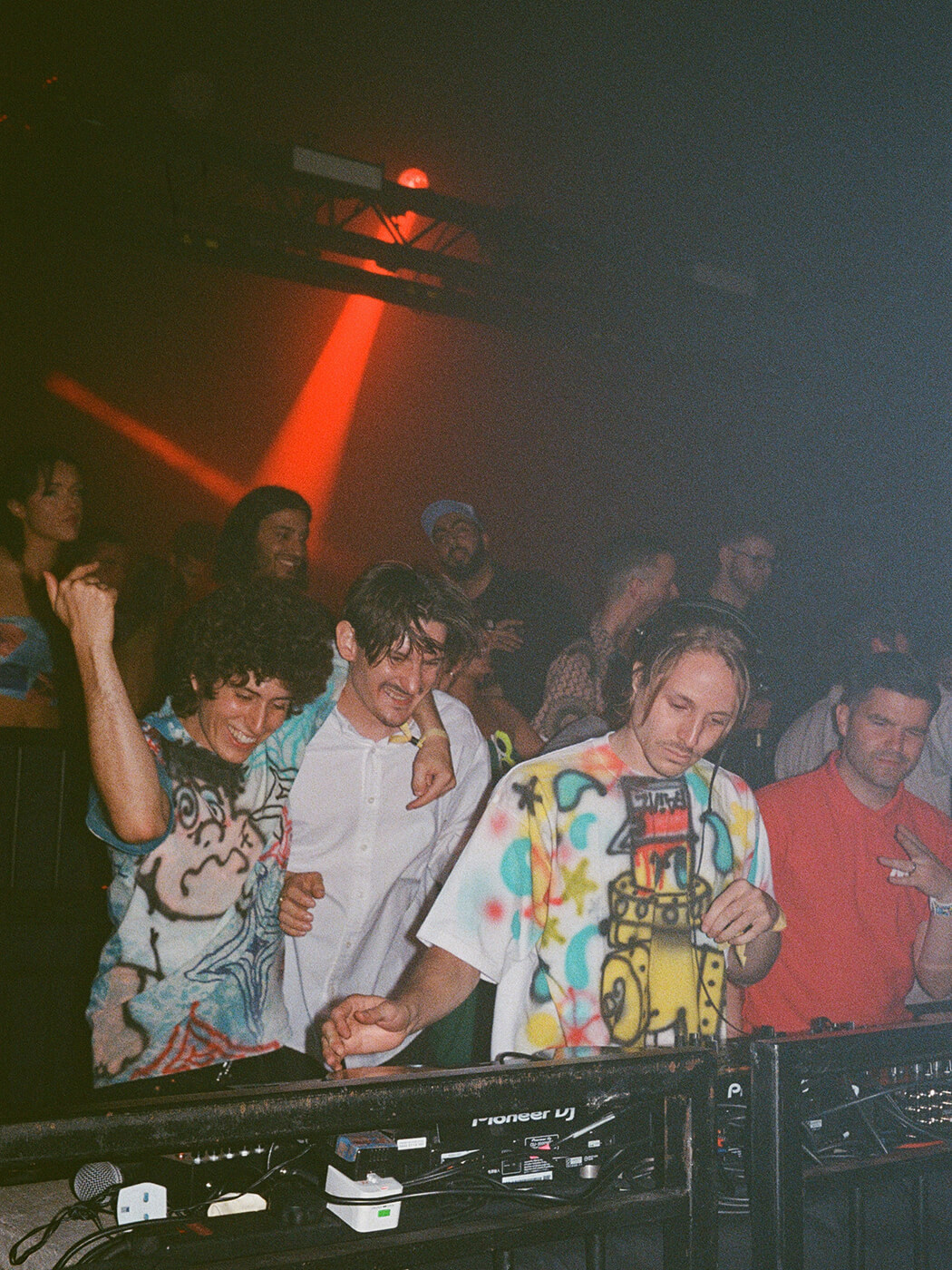 “It all adds to the standard of being an artist,” says Perez. “If you don’t negotiate and you’re taking shit fees and 100 other DJs are taking shit fees then when we come around, even though we have more value because of our work, promoters are still going to lowball us because there’s already a standard.”

“Music and art is a lot more than just a job or a career path. It’s emotional. You work really hard on this. It’s something you’re expressing. It’s very vulnerable,” says Medici. “If you’re going to play this game, try to figure out a way to play it right.”

Medici and Perez have played the game to the point that they’re DJing back-to-back with one of their idols, and while they are grateful to be there, this is an opportunity for them to live up to that new standard.

“[Jones] is going to have to keep up with us and vice versa,” says Perez. “He’s a master obviously, but that’s the mentality that I bring into it. We have to be pro. We’re playing with a pro. So I’m not going to be anything less than pro.”

“We’re putting our all into this,” says Medici, and part of putting their all into it is making sure he finished mastering that track before they went to dinner.

When Medici, Perez, and Jones did take the stage together at 2:30 AM, it was hard to discern which track Medici was mastering in the hotel beforehand. But the London crowd that lives and breathes garage kept dancing until the very last drop of Latin energy merged with garage beats – a sound that is truly the definition of innovation.