With a production career spanning over 30 years, Lenny Fontana has earned his place as a New York legend, pioneering and exporting the city’s disco and house sound. We talk production techniques, his renewed popularity and his secrets to longevity in an ever-changing industry. 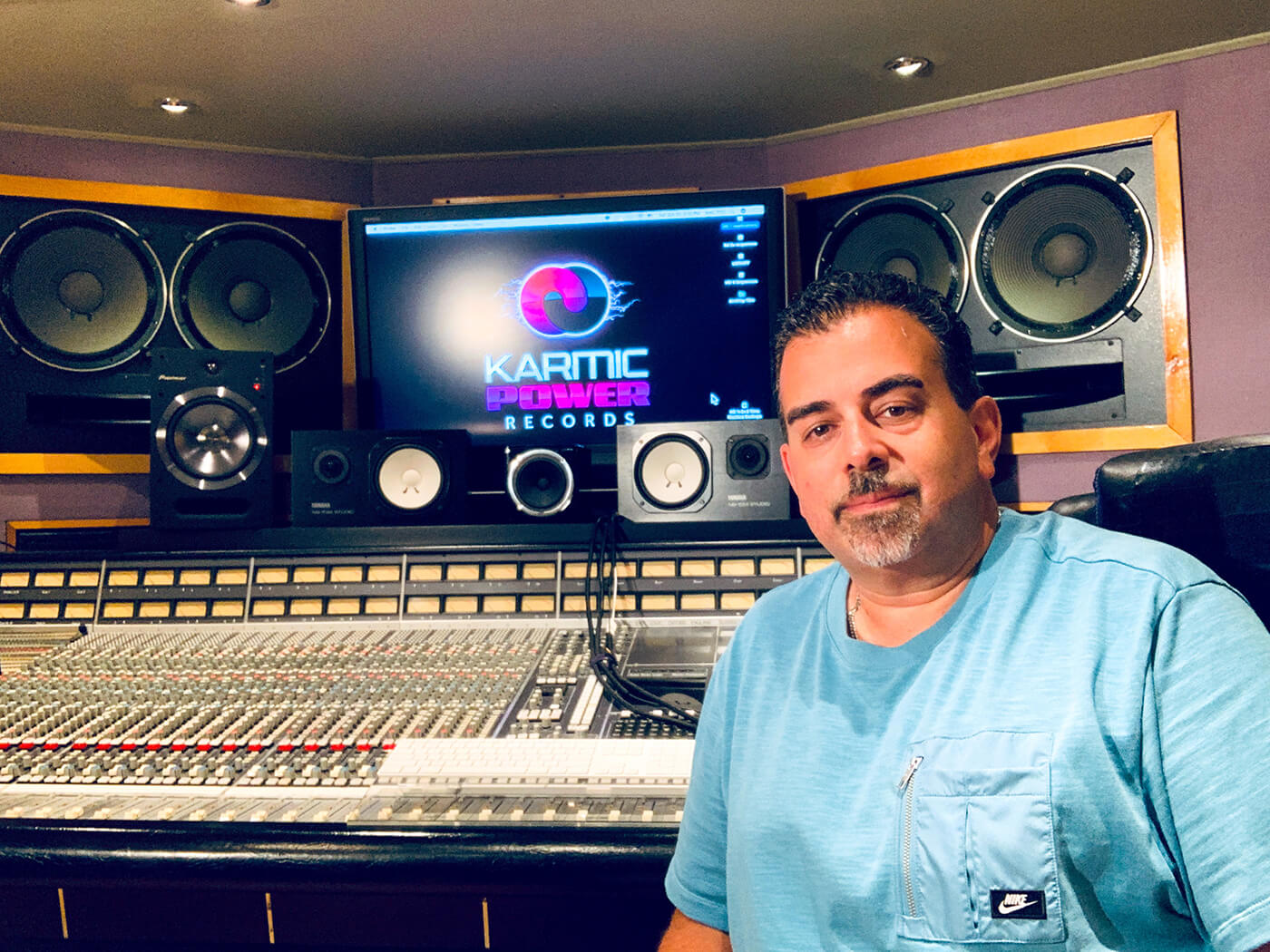 Growing up in New York in the 80s, Lenny was inspired by WBLS radio legend Frankie Crocker who was a champion of the disco sound pumped across the airwaves of NYC during that decade.

Fontana was fascinated by this music and the stories being told about the city’s now-legendary club, the Paradise Garage. Keen to understand and experience the vibe, he snuck in one night, and that was it. The 80s, the music and some bloke called Larry Levan fuelled a passion in Lenny to take up a career in music, at first as a DJ playing at Studio 54 and other NYC clubs, and eventually the world. In the early 90s, he began his production journey with his first release on Strictly Rhythm as Butch Quick entitled Higher.

During this period he released and remixed a catalogue of music. Among his biggest hits are What You Need (Defected Records/Ministry Of Sound) as Powerhouse with Duane Harden, and then one of his biggest – Chocolate Sensation on (FFRR/Warner). Lenny went on to release and remix for the likes of Ministry of Sound, Cr2, Strictly Rhythm and Defected.

In 2020, he has hundreds of productions and remixes to his name, across his own label Karmic Power Records and remix sets on the likes of Midnight Riot. And it all comes out of his underground studio in central New York City.

How did your journey into music production begin – was it a natural progression from DJ’ing or something you always planned for?

Well, it began with my grandmother and I walking past a piano teacher who worked out of his house when I was about six years old. She wanted me to study Piano. She dreamed that I would become an orchestra conductor. I learned to play classical music and went deep into it, having no idea I would ever be using these skills for production until later in life. During the 1980s, I saw many DJs remixing the records that I loved playing and it inspired me to go into writing and production work. Around 1988 I spoke with my friend Rick Lenoir from LNR Records in Chicago and he said to me “you can do this” and I bought a drum machine, then had an open reel-to-reel. The rest is history.

You started making tracks back in the early 90s. What were the first important studio purchases back then – any gear from back in the day still in your studio now?

The only thing I have left from the original studio would be my DAT machine, which was a Panasonic SV-3700, everything else I was upgrading constantly. I started with an Atari 1040 ST Computer, Korg DSS-1, Akai S950 and Roland D-50 with an eight-track recorder. My first production was called Babuda which was released on LNR Records out of Chicago. Listening back now, it sounds so primitive, but you have to start somewhere. It was released around 1989.

You’re renowned for working with disco and house genres of music, have you ever produced others in your underground studio?

I produced an album with a rock band back in 2000 to try something different. It went very well, but the band was not into touring so it would have been hard to get the album to move. It was a great experience for me though and applying my Solid State Logic 6048 E/G+ console with all its analogue circuitry made the album sound amazing. The history behind that console can be heard on millions of records.

What DAWs are you working with and why?

Digital Performer from MOTU as it’s very musical and it makes sense to me, as I’m a musician. I also have Logic Pro X. Nowadays DAWs all work in a very similar way and even look very alike. I have tons and tons of plug-ins to complement the workflow too.

Your tracks are very song-based, you work with a lot of singers and session musicians, what are your key approaches for collaboration?

When it comes to collaborating, I need to have a musical bed laid down first to then approach a singer or a session musician. I found it has worked very well for my productions. I can see the direction clearer, which helps when working on the melody and the lyric, developing it into a full song with the vocalist.

Drums are a key feature in disco and house music, do you use sample-based, live drums or a mix of both, processed as one?

That totally depends on the direction I am moving towards. I have always worked with live drummers and real drum kits, as well as sampled sounds coming from the Roland library and other sample libraries. If I’m working on house music, then it’s mostly sample libraries to get that big drum sound that I am after. If it is a disco song, then its predominately real live drum kit sounds that are necessary to make the track stand out.

What’s the story behind your prized SSL 6048 Console? Was it a purpose buy for its features or a very happy accident? Can you also talk us through how you use it in both the recording and mixing stages?

During the golden era of house music, I was remixing and producing a lot and I would be sitting behind an SSL most of the time in different recording studios around NYC. I dreamed of owning one and having one at my disposal. Well as luck had it, coupled with some hard work, I had a string of hit records and things changed pretty quickly. I was in a position to purchase my home and decided I wanted to build a proper commercial studio in 1999. I started to look for a console and I found this one that came out of the legendary Soundtracks NYC studios. My close friend, Grammy Award-winning engineer Jim “Bonzai” Caruso worked on the console and advised me to grab it. I did, and for a while, I had a lot of record labels coming into my studio to work on their mixdowns and remixes. Up until September 11, 2001 things were going great in the music business, but in that moment it all changed. To sum it up, record labels started closing down and the digital age was also truly born with the beginning of Napster and all the free downloading. 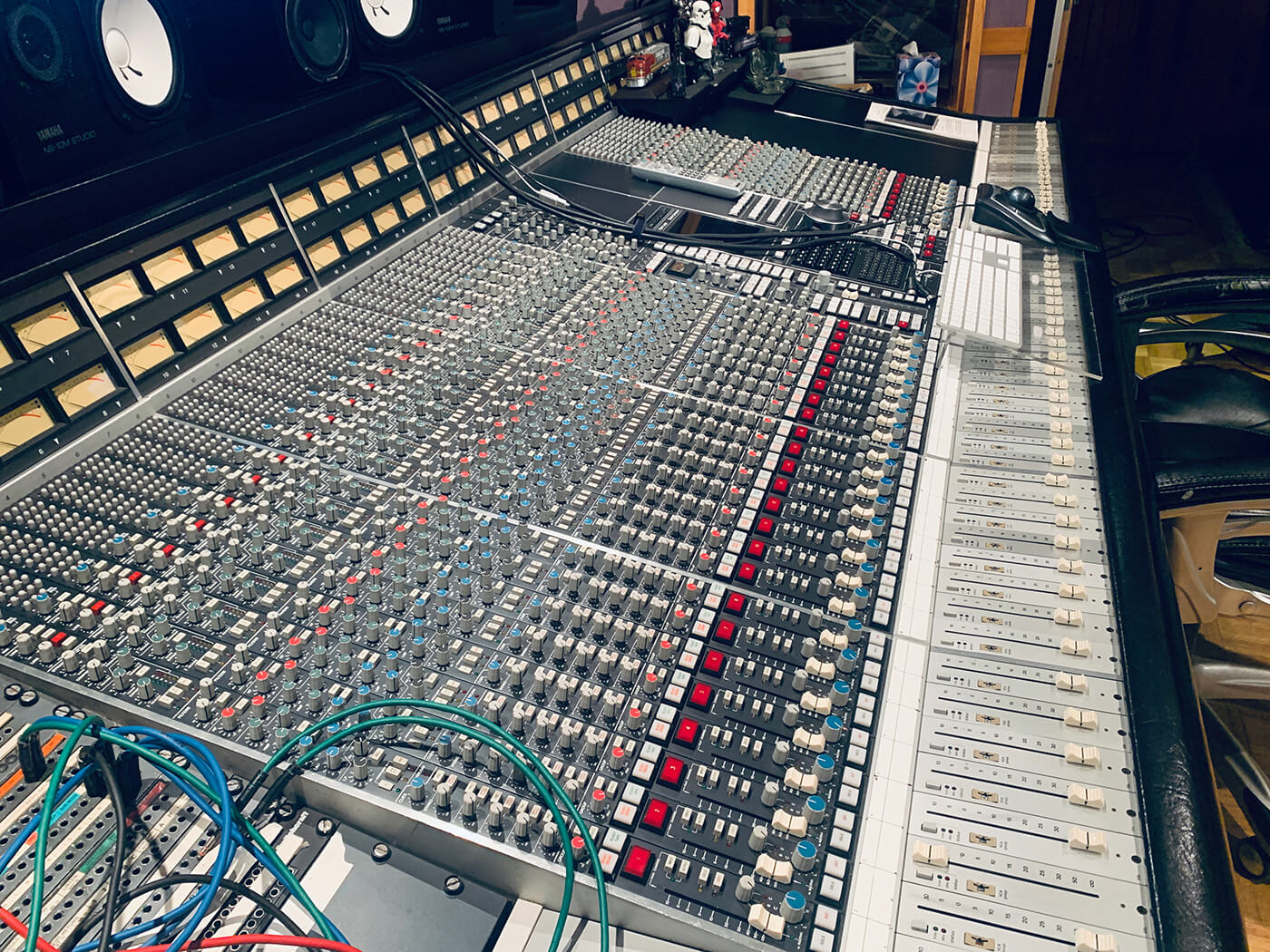 Today, the mixer is central next to the computer, I assign all the DAW channel outputs through to the consoles 32 channels and use the EQs and the outboard compressors to get that rich sound the board offers from all of its analogue electronics. I also spent years recapping the console and bringing it up to today’s standard. It has capacitors and real electronics, and with age, things start to fail, so you have to take every channel out and change all the parts on it, heavy maintenance. As you can imagine it was an expensive thing to do, but I’m glad I did.

Digital versus analogue processing: You have a highly desirable collection of classic analogue gear in your studio, do you always process with this gear or does the lure of digital often draw you in another direction?

It really depends on what I am doing at the moment. For starters, if we are tracking vocals I am using the Neve 1073 mic pres with the Urei 1176 tube compressor. I also own a Telefunken V72A which I used to use during the 1990s to track vocals with a Neumann mic. We have excellent SSL G+ mic preamps on my console that can be used as well. What’s funny now is seeing all these as plug-in emulations which are pretty close to the real deal, but it’s not exactly the same. People tell me they can hear it in my music when I am using real gear.

Looking at your gear list and listening to your music, it’s clear that great care is taken to retain warmth, space and depth whilst focusing on true dynamics, what’s your workflow when mixing?

My workflow is mostly inside the computer when it comes to programming and when I get close to mixdown I start to bring things onto the faders of the console to get the sound I need. I then use my Pultec EQs and my Urei 1176 compressors for that tight low end, and the EQs on the console to touch up the vocals and all the instruments.  Once I have the mix heading in the right direction I send all the sounds back to stems, from there I drop it all back into digital, tidy and finish up. It takes a little bit longer, but I like the sound I end up with. So, I am getting that warmth but with that digital push all wrapped into one.

What key techniques and tools define you as an artist, do you find yourself returning to any time and time again?

There is a certain swing I use in my drum programming with my hi-hats and shakers, I’ve been doing it forever and ever. I heard other DJs say right away, ‘that’s Lenny’s track’ because they know my drum programming and the feel of my chord progressions which I love to roll with.

“I’m getting warmth but with that digital push all wrapped into one.”

You are currently running some producer webinars from your studio, can you tell us a little more about them, did they come about from the recent COVID-19 crisis?

For years I have been asked over and over again to teach by many different people and I always would answer ‘sure yes, yes, yes’ but never got around to it. Now, due to the COVID-19 pandemic and having the time, I decided to jump in. We are all stuck at home, so there is no better time to try this. I came up with the Lenny Fontana Music Production Webinars on Zoom. So far, it’s been running extremely well with lots of students in each class. I staggered the classes, they run every two weeks so people don’t stress with the pressure of a weekly commitment. I created 6 classes on how to program drum beats, learning the sounds used in dance music, the use of music samples in your tracks, working with vocalists and finally track arrangement. 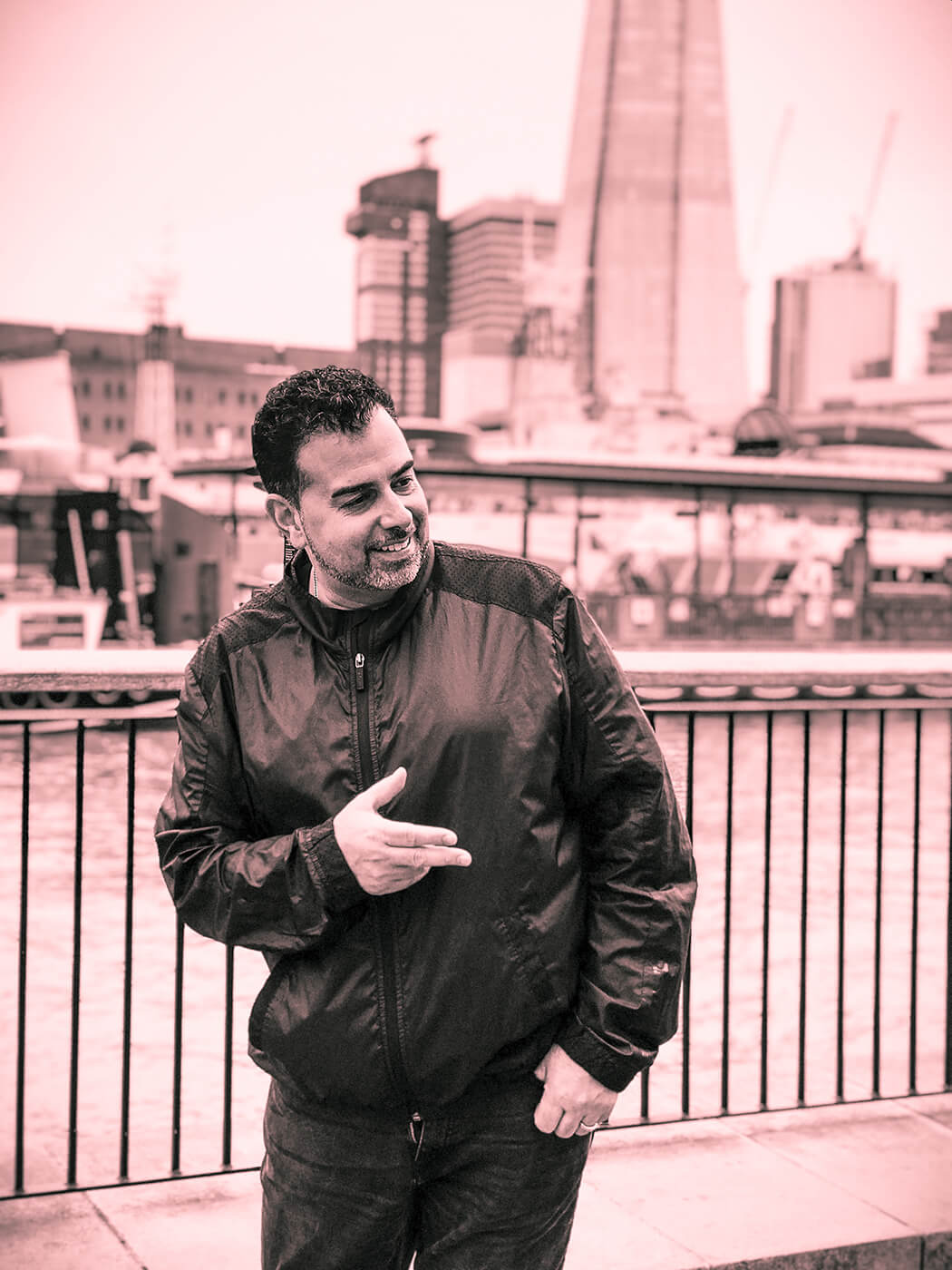 Drawing upon your years of experience, what 3 invaluable pieces of advice could you give to our readers that they could implement in their own practice?

#1 No matter how hard the challenge, never give in. We all know that the music business is full of challenges. You will hear stories from others ‘if I didn’t push that little more I would have never made it’.

#2 Research the history of the music you are preparing to produce. This means understanding the background and the sound and who was responsible for it, this will help you make better records.

#3 Don’t believe everything you are told. People are always going to give you inaccurate information. Listen to your gut feeling when making crucial decisions, as you will find it will help you move forward and win.

What three albums would you really take to a desert island?

Quincy Jones The Dude album, Earth Wind & Fire That’s The Way Of The World and Chicago The Greatest Hits.

Finally, what upcoming original productions and remixes should we look out for in the coming months?

I have two huge projects coming out soon, one featuring Vangela Crowe called Hell Yeah and another with vocalist Carmen Brown which we are working on at the moment. I will announce some of the other surprises soon. 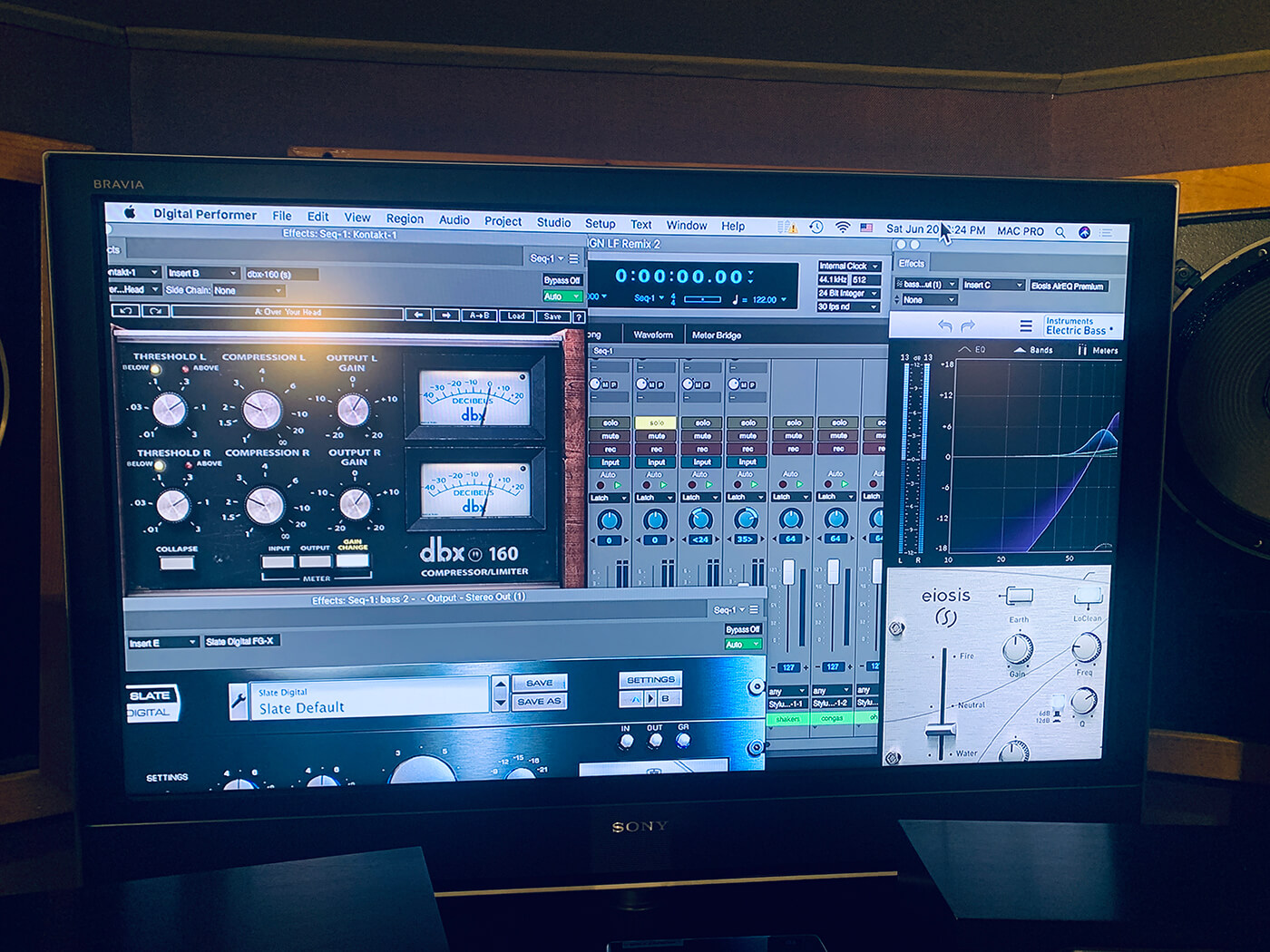 Stay up to date with Lenny Fontana at lennyfontana.com, plus his Facebook and Soundcloud.