Chaos and Climate: Hildur Guðnadóttir and Sam Slater on scoring the near-future world of Battlefield 2042

The award-winning team sat down to talk about their disruptive new score, hybrid instruments, and bringing a punk attitude to screen composing.

“If you want to go as far outside the box as you can possibly go, it kind of makes a lot of sense to hire someone that has no idea what the box is to begin with.” So says Hildur Guðnadóttir, the academy award winning composer and cellist, about her recent work on the highly anticipated Battlefield 2042.

The game is set to totally reimagine the music landscape which has traditionally accompanied the beloved Battlefield franchise. Working alongside her co-composer and partner, Sam Slater, the two Berlin-based musos were given one primary directive from publisher DICE: to create music that is completely disruptive.

The result? A Battlefield title that dispenses with heroic trumpet melodies and lush string sections, and instead drops players into a world filled with grit and distortion, with screeching timbres and guttural sirens.

The future is here, and its soundtrack takes no prisoners.

A background in experimentation

Both Guðnadóttir and Slater have a background in experimental music and have built a reputation for intensive onsite recording, capturing sounds in decommissioned nuclear power plants and submarines and transforming them into musical textures.

That exploratory approach can be traced back to Guðnadóttir’s childhood, growing up in Iceland – a place so small that only one airline flew in and out of the country and the composer could count the number of amplifiers and gear that she had access to.

Classically trained as a cellist, she quickly began playing with boundary pushing bands like Pan Sonic, Throbbing Gristle, Múm, and Stósveit Nix Noltes. She recalls the music scene in Iceland wasn’t exactly lucrative at that time. “Sigur Ròs, Bjork, this whole scene of people, none of us ever thought that we would ever make a living with this stuff!” Guðnadóttir recalls with a laugh.

Nevertheless, the composer describes it as a “communal, fun and friendly and explorative situation, and that energy is by its nature very creative”. Coming from a similar background playing in bands, Sam went on to study experimental composition at Leeds University before his professional career led him to Berlin, Germany. It was there he got his start working as the principal musical sound designer and creative engineer for the late, great Icelandic composer Johann Johannsson.

When discussing their appreciation for experimental music, Sam says “When we get together, we are always really excited by the idea that you can make sounds do things” adding that, “why would you look to the familiar places when you can look for unfamiliar places?”

Both Guðnadóttir and Slater swept to global prominence in 2019 with their work on the psychological thriller, Joker, and the acclaimed historical miniseries, Chernobyl.

In both cases Slater took up the role of score producer, while Guðnadóttir held the reins as composer. It was a creative partnership that bore significant fruit – Joker went on to win the Academy, BAFTA, and a Golden Globe award for Best Original Score, making Guðnadóttir the first solo female composer to win all three, and Chernobyl was awarded a Primetime Emmy, a BAFTA and a Grammy.

So, with a breakout year under their belts, the duo decided to mix things up and co-compose for the first time on Battlefield 2042 – and, despite having never scored for games before, the pair took to the project with experimental zeal. 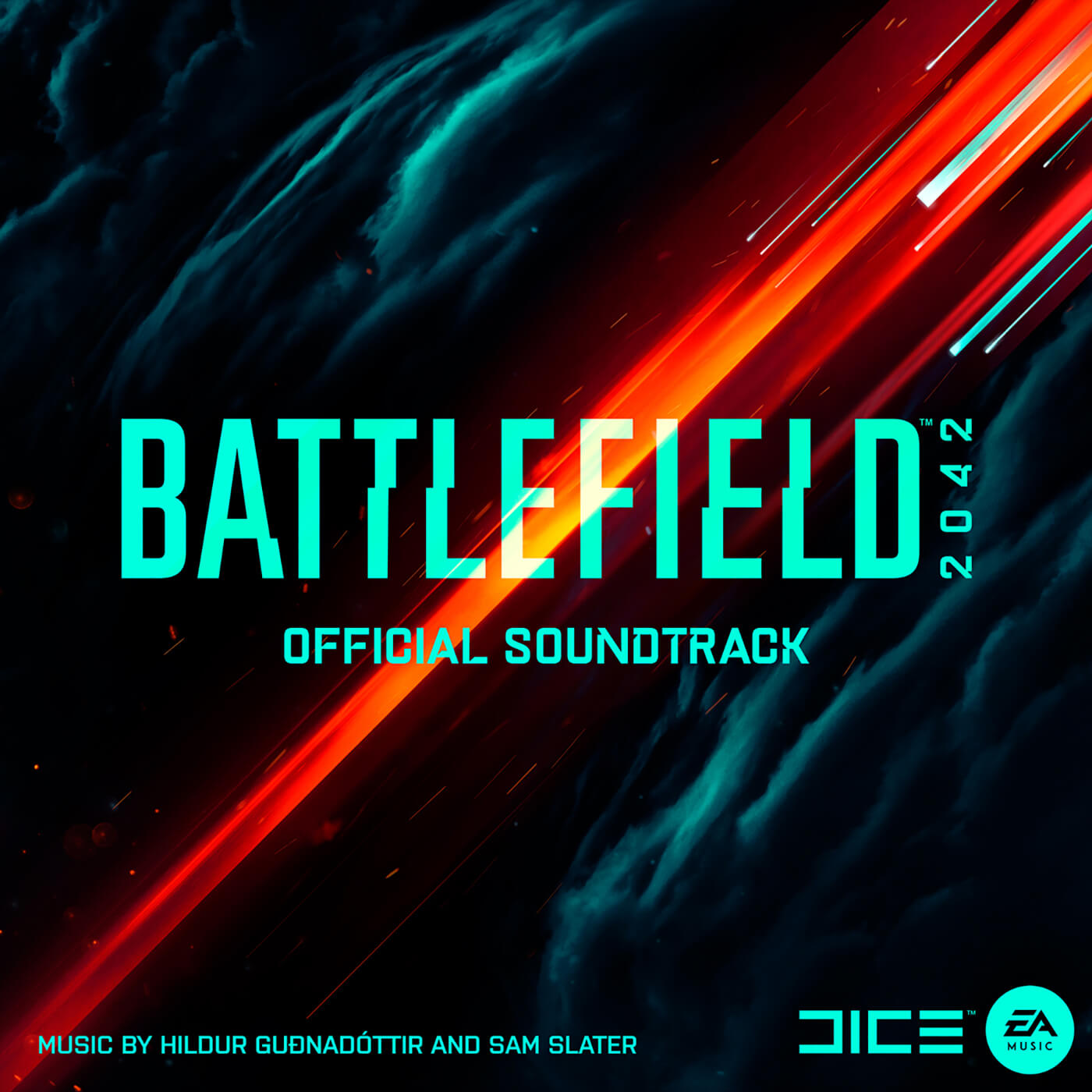 Battlefield 2042 takes place in a near-future world wracked by climate change, scarcity of resources, and political turmoil. Though conflict and warfare are bread and butter to the Battlefield series, what really captured the attention of the two composers was the equally destructive power of the weather systems which cause havoc throughout the game levels, turning the environment itself into an enemy.

For Guðnadóttir and Slater, it was the “dialogue between humans and nature” that provided the impetus for their recording approach. Eschewing sample libraries, the duo instead opted to build an entirely new sound world from the ground up. As Guðnadóttir puts it, “All the sounds are created by us from scratch, none of the recordings existed before we started working on this”

Instead, the sounds of Battlefield 2042 are derived from the physical materials found in the game’s levels: earth, metal, glass, and sand, are warped, stretched, and transported into the musical realm.

Often this was achieved though surprisingly analog means. Describing one of his favourite percussion sounds, Slater talks of building a custom instrument made up of four trays, each filled with materials from the game levels, and placed above massive bass drivers. “Each one was tuned to pick up a specific kind of frequency or resonance coming out of various instruments” he says. This innovative approach allowed the duo to ‘play’ the physical materials of the levels and capture the sound of the substances vibrating to the tune of Guðnadóttir’s cello, or Slater’s rhythms.

Meeting weekly with the audio team, Slater found his job to be very closely aligned with the game’s sound designers who were tasked with bringing the world to life. “The visual departments are dealing with the eyes,” says the composer. “You’re simply dealing with the ears, with the intention of creating a cohesive experience of these frankly colossal and very exciting worlds.”

The soundtrack was written during 2020 which imposed some additional creative restrictions. At one point they had the opportunity to travel to France and spend some time recording ship engines, but eventually travel restrictions meant they had to reimagine how to access the sounds they were looking for. At times, this meant searching for sounds within the confines of their postcode – a 5km radius.

“Some of the creative decisions we’ve made have been directly expanded or contracted based on how far outside of the city we were allowed to go”, says Slater.

In the lineage of the Battlefield franchise, the music has always had traditional orchestral scoring, later incorporating the use of electronic production techniques.
Breaking into a whole new musical territory was a bold move for such an established franchise, and Guðnadóttir and Slater say they were certainly aware that not everyone would like the new soundtrack. Nonetheless, they, and the development team behind Battlefield 2024, were committed to creating something daring.

“It’s messy, it’s chaotic, it’s falling apart.” Says Guðnadóttir, when asked to describe the game’s world. “You can’t really have something that’s clean and pristine, the music has to live in the same world as the game. So, it needed to be ugly, messy, and really tangible”.

The tactile nature of the sound recordings comes through sharply, having an otherworldly quality without the use of synthesizers, which would probably be the first port-of-call for other composers. When asked if convolution synthesis was used on a particular track, Slater replies with a chuckle, “We’re a bit more punk than that”. Instead, most of the technical end involves what the composer describes as the “abuse of compressors” more than anything else.

“Actually, Hildur often says to me,” grins Slater. “If you ever turn around and say ‘I’ve found the plugin that will solve this problem’, then you’ve run out of ideas.”
While Slater and Guðnadóttir have an undeniably DIY aesthetic, and a clear love for sounds that originate in the real world, they certainly don’t shun technology either.

While working on the track, The Observation of Beautiful Forms, they opted to enlist a coder to build a machine learning algorithm which could create ‘sound profiles’ of different physical materials. And while at one point they recall the algorithm spitting out 24,000 useless files, eventually they were able to train the algorithm to create profiles of ringing glass and other sounds. The final step was to input the sound of Guðnadóttir’s voice, allowing them to appropriate the timbral essence of the glass with all the nuance, expression, and musicality of the human voice.

“There’s lots of really strange and beautiful things,” says Slater about the sounds they achieved throughout the creative process. “When we listen to the score, they often make us smile.”

Though neither composer would call themselves gamers, they both offer an unequivocal ‘Yes!’ when asked if they’re planning to play Battlefield 2042 upon its release.

“I might be ‘dating’ myself a little bit,” says Slater. “But whatever the 2021 equivalent of a LAN party is, we’re going to be doing it.”

So, after conquering the worlds of film, TV, and now game, the pair show no signs of slowing down. Asked what they plan to work on next, Slater pauses before replying with a drawn out “Muuusic”.

Guðnadóttir makes clear those future plans will include two different scoring projects, a record, and likely some live performances. So, what gives them the energy and inspiration to keep pushing their artform into new and exciting directions?

“Exploration gives you that feedback loop of discovering things every single day,” says Slater. “Which makes it very easy to turn up in the morning.”