Scoring an apocalypse: Herdis Stefansdottir on her music for FX’s Y: The Last Man

The Icelandic composer discusses the sound of society’s collapse, electromagnetic harps, and working on a majority female production. 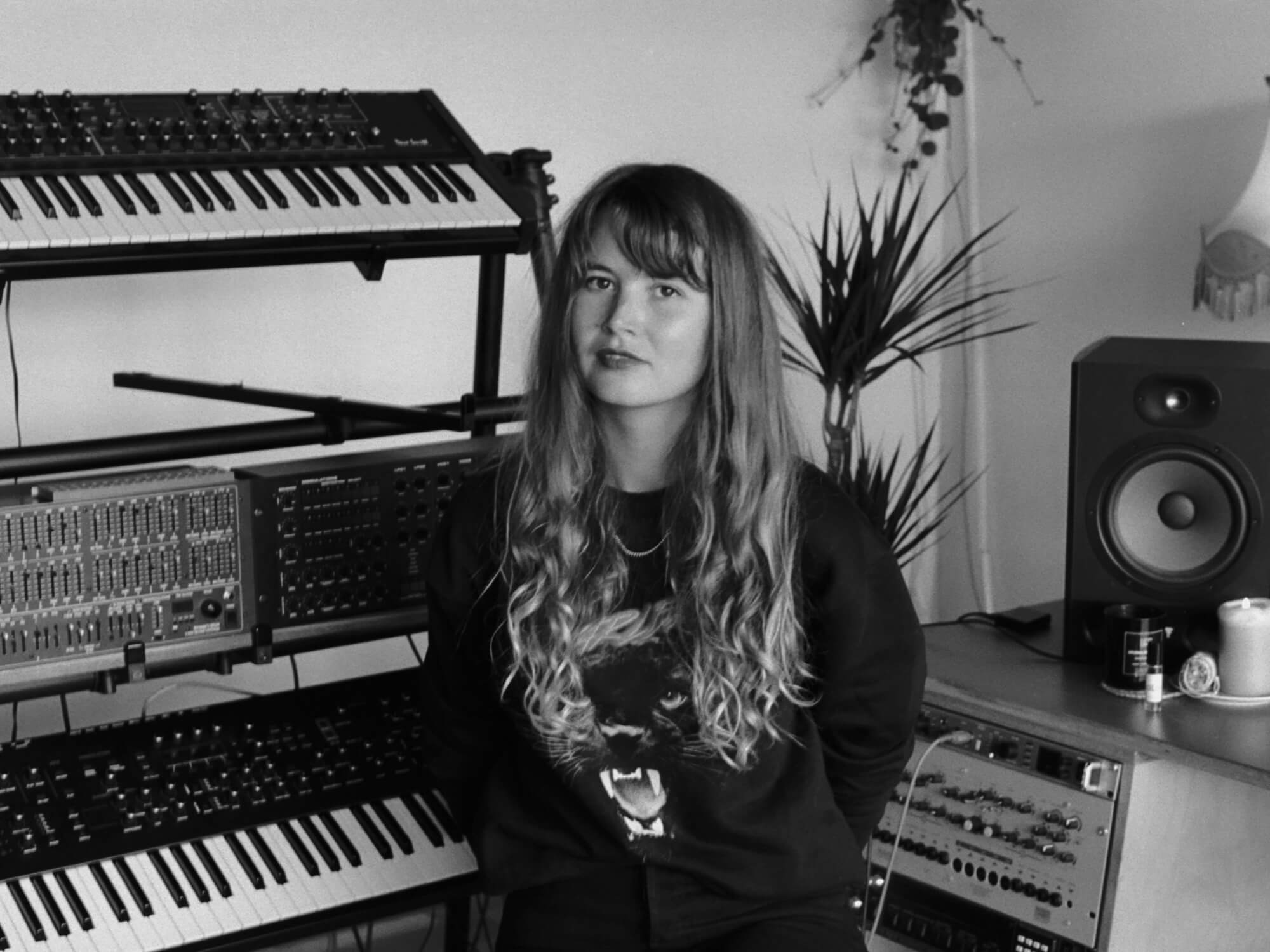 “I just went for it, doing whatever I thought was exciting and interesting and cool. I guess I got lucky that they liked it.” We’re speaking with composer Herdis Stefansdottir about her new score for Y: The Last Man, FX’s adaptation of the seminal 2002 comic books penned by Brian K. Vaughan and Pia Guerra.

Built on breathy vocalisations, growling synthesisers, and Spaghetti Western slide guitar, Stefansdottir’s score brings a hauntingly humanistic touch to this dystopian tale of plague, power, and hope. It’s a story with a distinctive premise: a devastating virus has wiped out all males on the planet with a Y-chromosome. All except for Yorick, the day-dreaming son of a senator, and his simian companion, Ampersand.

So, what was it like penning such emotive music during a global pandemic?

“I really enjoyed writing the score,” quips Stefansdottir. “You know, just kind of getting some beautiful melodies into the apocalypse.”

Stefansdottir’s path to professional composer didn’t begin until her early 20s when she enrolled in a classical composition degree at the Icelandic University of The Arts, but very quickly she began to pair her music with other creative mediums.

“The actors and directors and dancers were all sharing the same building,” she recalls. “That’s what got me interested in the collaborative aspect of making music. I started working with other students, writing small theatre and dance pieces, and seeking out visual arts students. I really liked connecting visuals to my music.”

While following up her undergraduate degree with a Master’s in screen composition at New York University, Stefansdottir had a chance meeting with fellow Icelandic composer, the late Jóhan Jóhannsson. After a brief discussion, at a post screening Q&A, Stefansdottir approached the film composer for an internship, eventually moving to Berlin to work at his Kreuzberg studio alongside several other young composers who would go on to become her contemporaries. 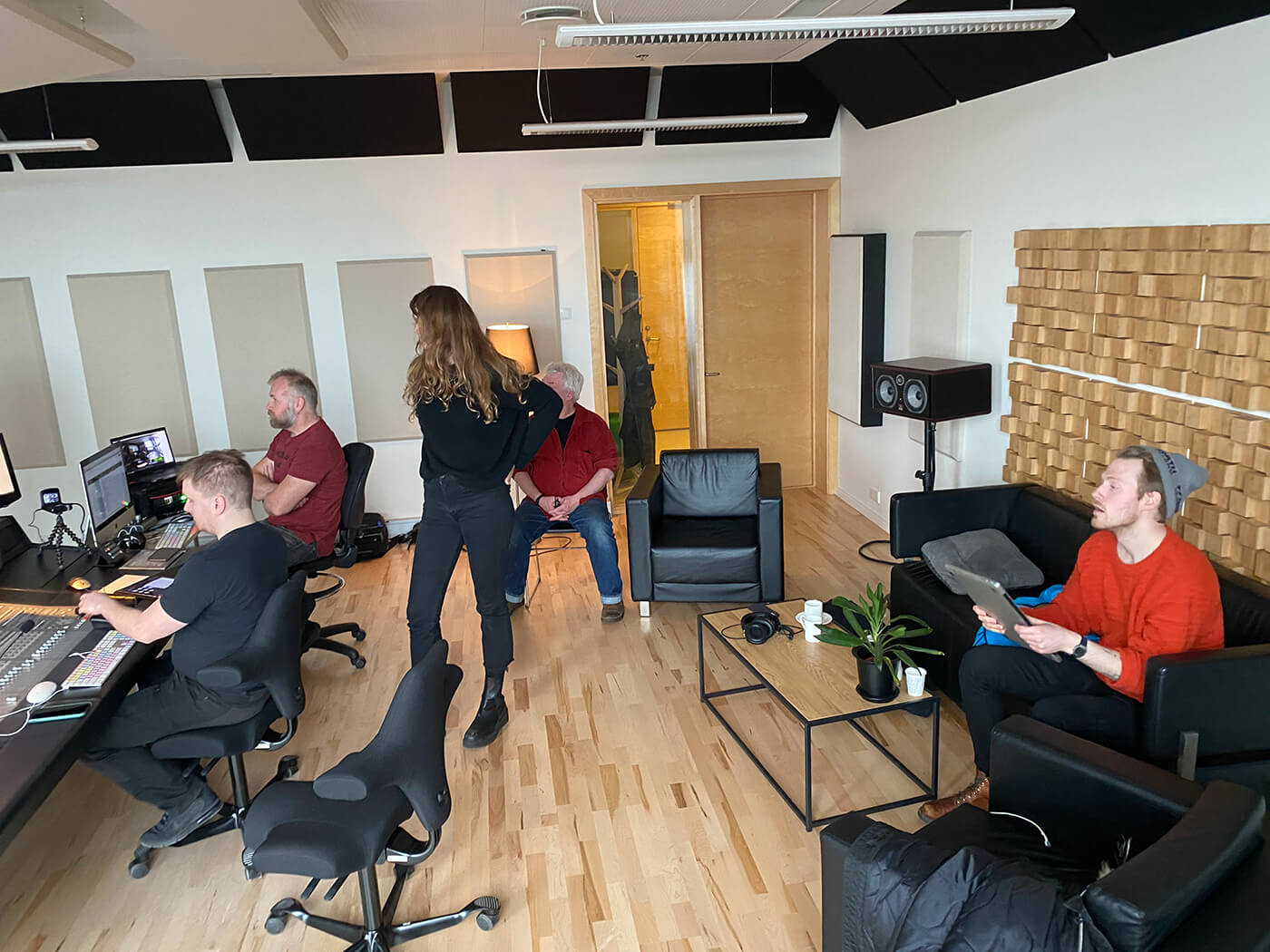 “It was there that I got to know Hildur Guðnadóttir,” she says. “She was there sharing the studio space, along with a lot of other very inspiring composers that were just getting their foot into the film scoring world.”

Over this period, Stefansdottir worked with Jóhannsson as he wrote his highly influential score for the film, Arrival. “It was pretty challenging and interesting because composers each work so differently,” she recalls of the time. “So, to see his session and how he worked… you can learn a lot from just watching somebody’s working process.”

Since those early days in Berlin, Stefansdottir has gone on to score for HBO’s We’re Here, the feature film The Sun is Also a Star, while also finding time to release an alt-pop album as one half of the duo, East of My Youth. Through those projects, the composer developed not only a strong musical voice but a highly individual style of working: her DAW of choice for film scoring is Ableton, even though she herself describes their video engine as “a nightmare”; she never plans out her compositions, saying that “every day is different” when she’s writing; and when it comes to recording and mixing, she’s avowedly DIY.

“I think with film scoring you have to know technology,” she says. “You’ve got to know how to record instrumental players, to do most of it yourself, to make it sound good, and to deliver everything to the director. Working today… things start with a very small budget, so if you don’t have those skills, that means you’ve got to have money to pay people to do it for you.”

The composer’s stylistic blend of experimental sounds and classical scoring found an ideal match in showrunner Eliza Clark’s vision for Y: The Last Man. While the original comic book version followed the character of Yorick and his journey through a female dominated society, in its small screen adaptation the story has been refreshed, updated, and significantly broadened. Issues of gender, identity, politics, misinformation, and extremism are all opened for examination, and Yorick and Ampersand serve chiefly as catalysts for the show’s events rather than necessarily being the primary focus. Instead, there’s a large ensemble cast and multiple storylines that spool out over the course of the series. For Stefansdottir, the sheer depth and breadth of the world challenged her to work in different ways.

“I remember being a little bit overwhelmed when I was starting the project”, she says. “I pulled up the picture and I was like ‘shit, I can’t work like this’. The story is so big, so complicated, and there’s so many things to dive into.”

After some initial experimentation with rough cuts, Stefansdottir ultimately chose not to score to picture at all but instead focused entirely on the script as she wrote, finding her initial inspiration in the first episode’s unflinching portrayal of death and loss.

“I was thinking about the event, the beginning of the apocalypse when half of humankind is dropping dead. I wanted to capture the sound of the world at that moment.”

The resulting piece of music, titled Requiem pairs tremulous vocal melodies with highly processed speech recordings. It’s a beautiful and unsettling evocation of the grief felt by those who’re left behind to pick up the pieces.

“It was a simple idea really, but I thought that it could be built around the female voice,” says Stefansdottir. “That it would be interesting to create these clustered female voices that are talking and mumbling, sometimes dissonant and sometimes in harmony. I went and recorded women in the north of Iceland, like 10 women. And I really went full-on into experimental territory.”

Along with those vocal experimentations, one of the score’s most distinctive textures is the sound of the Segulharpa – a one-of-a-kind electro-magnetic harp, constructed by fellow Icelandic composer and musician, Úlfur Hansson. 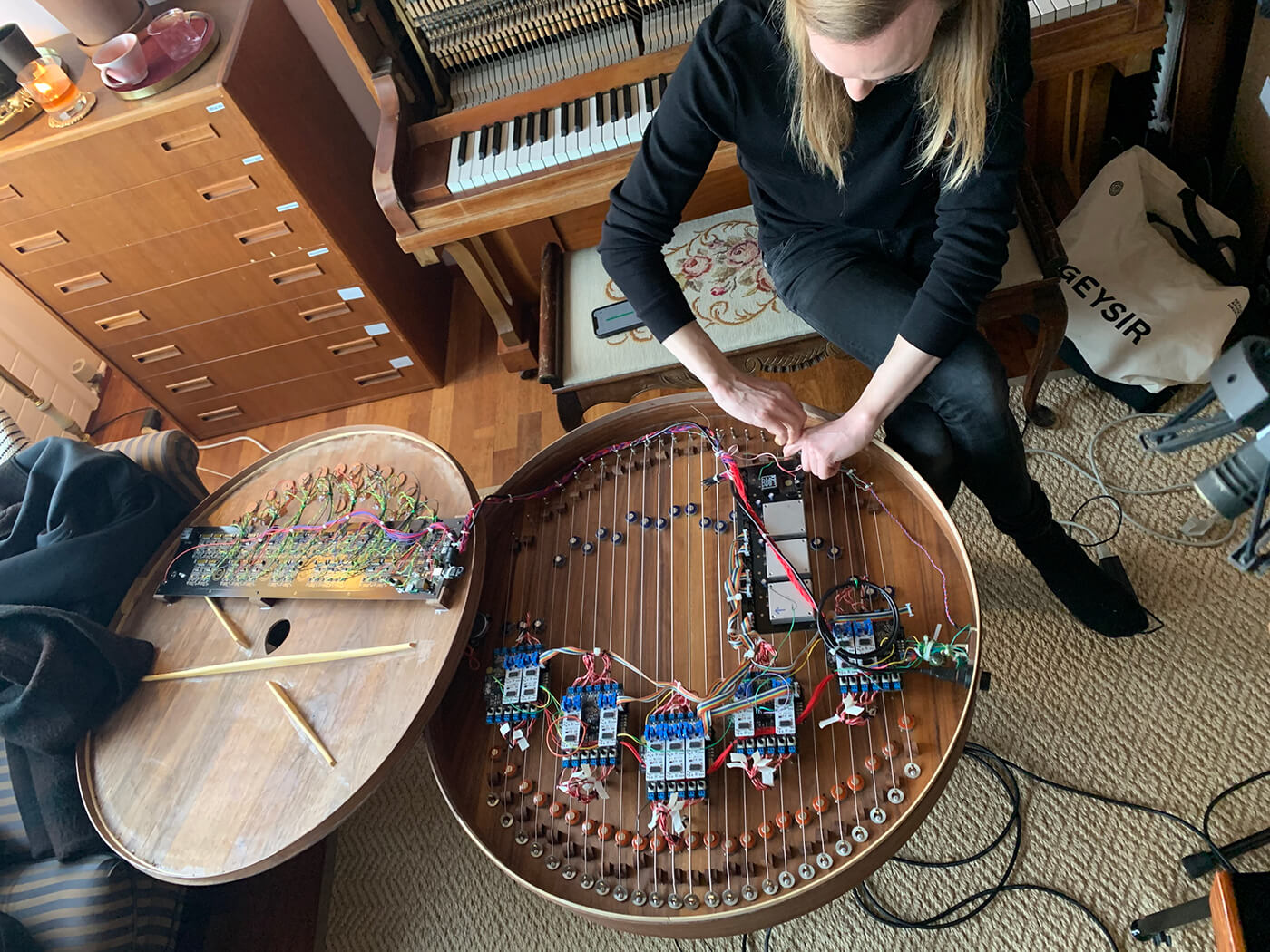 “[It’s] this electroacoustic instrument that looks like a beautiful big heart,” says Stefansdottir. “We close-mic’ed it and got this electromagnetic, resonant sound. You can get tones out of it, but they’re always a little different so it can be a bit tricky to work with.”

Despite that unpredictability, the instrument ended up being a key component for the theme of the ‘Amazons’, a group of domestic abuse survivors who form a ruthless collective of misandrists focused solely on survival.

While the show’s premise is undeniably grim, there’s a sense of hope and endurance that pervades the world of Y: The Last Man – a sense that the lawlessness and chaos may give rise to a new frontier of sorts, and the potential for new beginnings.

“A whole part of the score actually draws on wild west themes,” says Stefansdottir “I always really liked the old Western movies, like Ennio Morricone’s scores for The Good, The Bad and The Ugly. So, you have a lot of electronic stuff, but then there’s some organic vocals, drums, and guitar stuff that became almost a cinematic reference to Westerns.”

Y: The Last Man stands out not only for its distinctive premise but also for its production. Most of the show’s onscreen and behind-the-scenes talent were female, and while there will surely come a time when female-majority productions are common enough to be unremarkable, there is no denying that in 2021 it’s still the exception and not the rule – especially when it comes to sound. 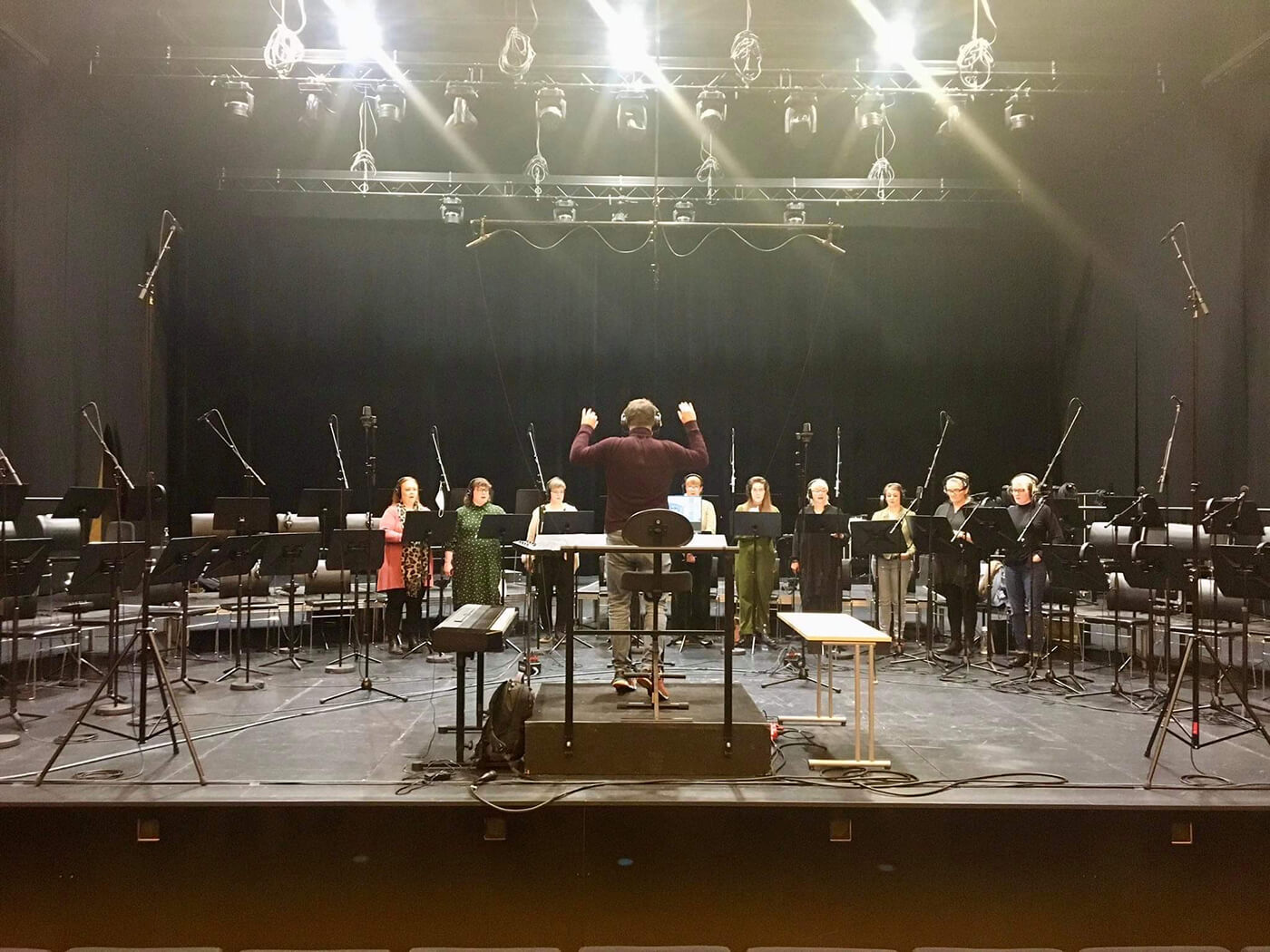 “I mean, I’ve never worked with a female sound team before”, remarks the composer. “The sound industry happens to be completely male dominated. It’s so rare that I can find female mixers and female mastering people and just females to work with me. Of course, there’s nothing wrong with men but it’s a bit weird when you’re like, always the only woman in the sound department.”

So, with the first season of Y: The Last Man wrapped up, what’s next for the Icelandic music-maker?

“I’m working on a solo record, and I’ll be doing my first performance in Ireland soon,” she says. “I’ve been so, so busy with film scoring that I’ve only had time to work on it in the evenings and weekends – that’s why it’s taken me forever to finish it. I’m hoping to start getting that music out maybe at the end of this year, or beginning of the next.” 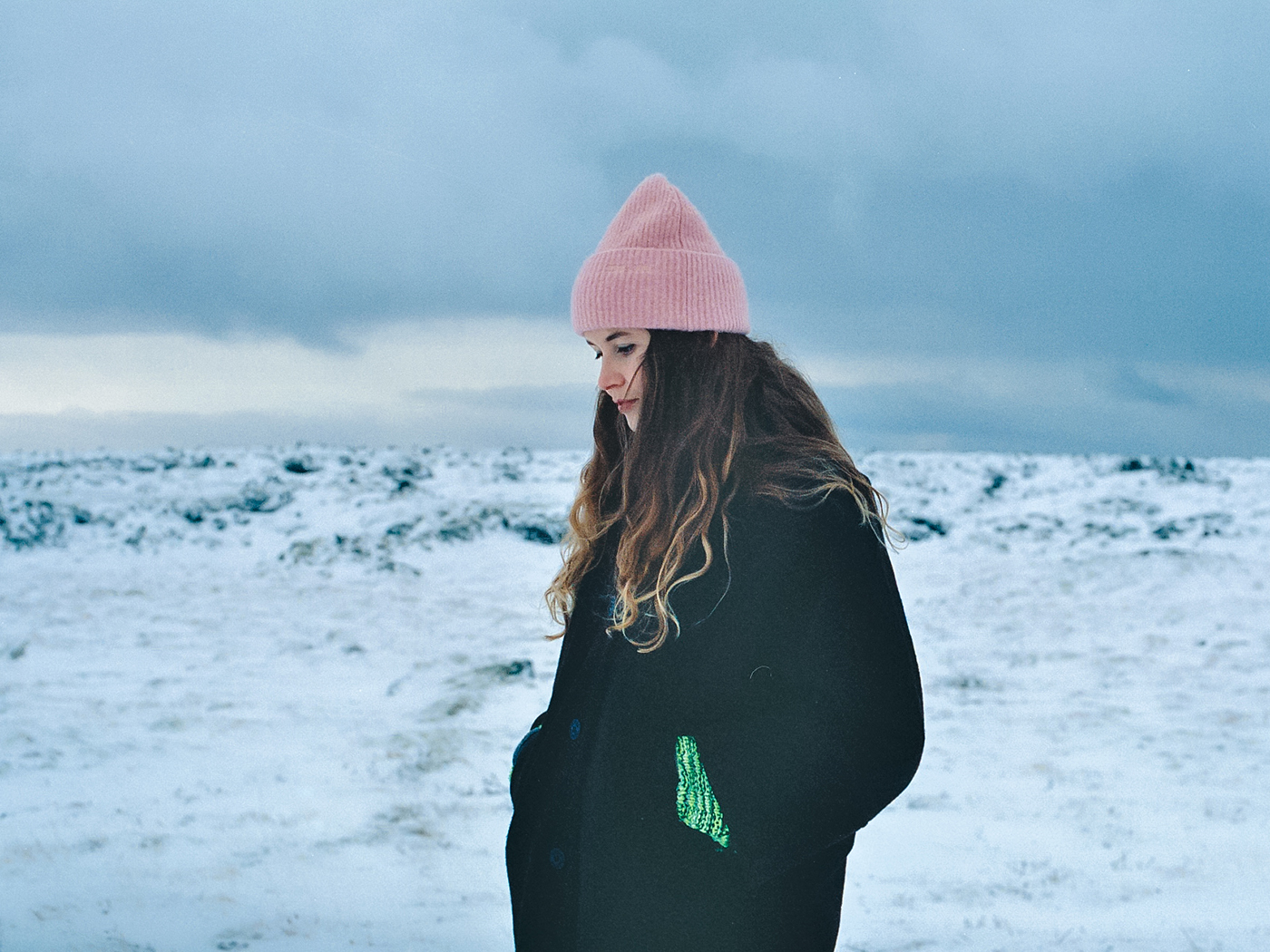 But don’t think that Stefansdottir is leaving the world of film and TV composition behind her, she also has a diverse line up of TV projects scheduled for the coming year; including a gloriously niche drama about 80’s era corruption in the Icelandic fishing industry, and a Victorian period drama.

“The Victorian period drama, that’s maybe the most challenging for me,” says Stefansdottir. “I’m a very electronic, sound-based composer but now I’m arranging for string quartets and just going back to the basics. It can be really cool working within the limitations of an instrument because then you’ve got to make a good composition, you can’t just be making cool sounds.”