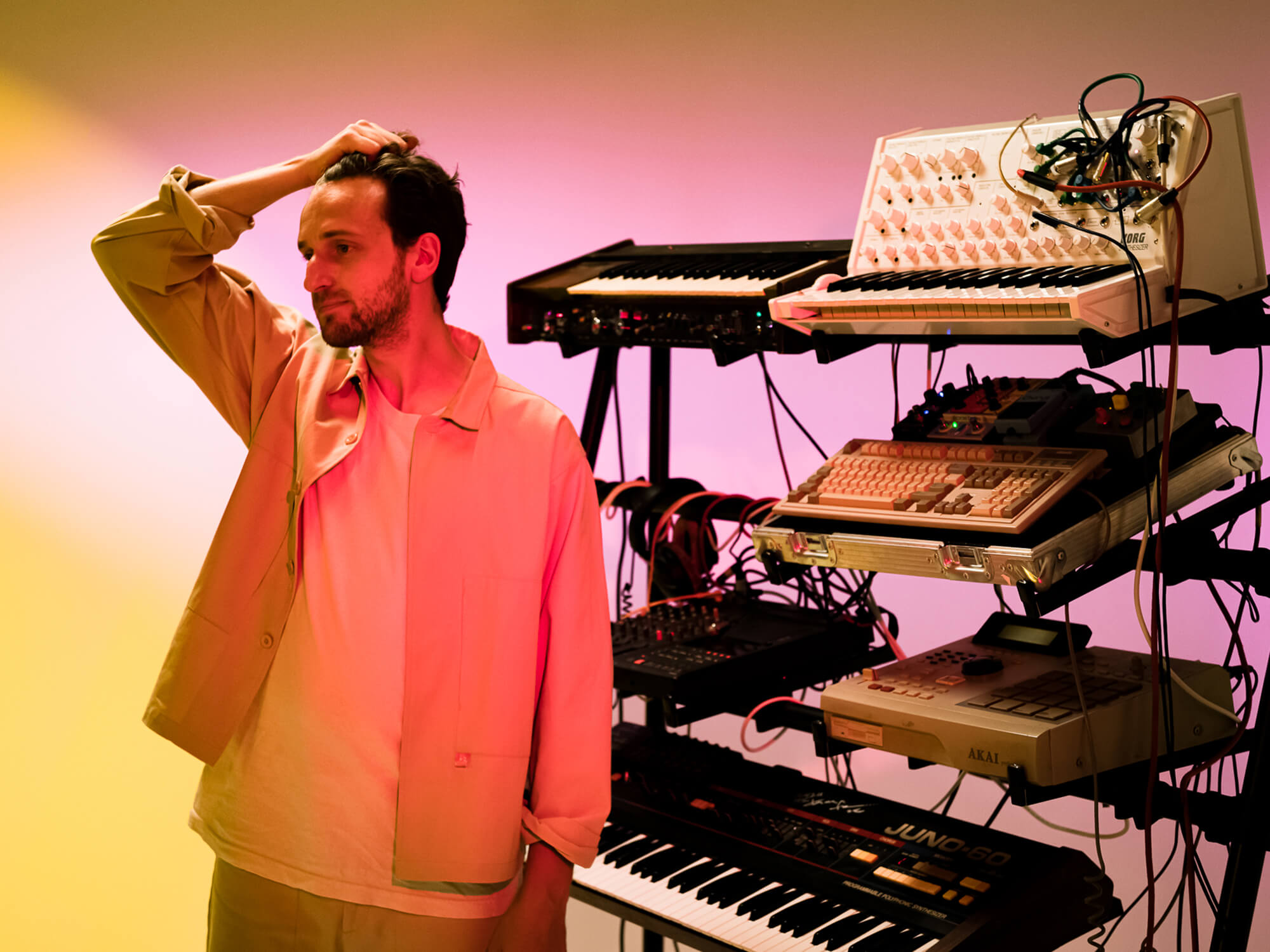 Melbourne producer Mike Katz wears his heart on his sleeve and tells us how he forged a deeper connection with himself and other artists during the making of his debut album.

On the surface, Harvey Sutherland’s debut album Boy is a dazzling exploration of funk. Scratch deeper and you’ll find that Sutherland, real name Mike Katz, is coming out of his shell, embracing himself in a way we’ve never seen before.

This is the most intimate the Melbourne-based producer has been on a record. Not just personally and emotionally, but creatively. The process saw him coming to terms with who he was as an artist. “A lot of the record was me in my studio, in my own head,” he says. “And, being restricted to not doing any collaborating, I found myself making stuff just for me – searching for serotonin”.

On Boy, Mike enters sonic spaces unfamiliar to him, turning up the tempo, chucking newfound attitude at us from all directions. The signature Sutherland sound of relaxed, jazzy, synth-heavy house is still there, but tracks such as Type A featuring Sos, Jouissance and Slackers reflect krautrock, post-punk and new-wave inspiration, inspired by bands like Melbourne’s Total Control and Kirkis.

It was these inspirations, alongside a Motorik drum break lingering in Mike’s head, that triggered experimentation in this grungier, more rigid style.

“I wanted to use that [Motorik] drum pattern and still manage to have this fluidity in it. Because you can take it too far into the post-punk direction and it can be really rigid and un-funky.

“I was just messing around on the MPC asking, ‘where do I find the funk in this?’” He tells us. “It’s a feeling that I hadn’t mucked around with too much. It felt new and exciting to me, even though it’s a common beat.

“The record became this journey of finding funk in unexpected places.”

However, as expressed through the lyrics in Type A – “I’ve got a Type A personality” – Mike is a perfectionist.

Over the past two years, he was not just finding funk but was looking for the perfect funk; that sweet spot in the centre of a pandemic-induced merry-go-round of his thoughts, the studio, and therapy sessions.

This theory of neurotic funk is explained via a diagram on the back of the album.

Although this record is symbolic of Mike’s personal journey, he thrives on collaboration. In recent years he’s been producing, remixing and songwriting alongside the likes of Khraungbin, Disclosure, Genesis Owusu and Hiatus Kaiyote, as well as with his band, Bermuda.

“I relish that [collaborative] working experience because you end up doing stuff that you would never do otherwise,” he says. “There is something really valuable about connecting with another musician or producer or a singer. It brings out things that you just would never find on your own.”

On Boy, most tracks were made or developed with the help of the Swimming Pool Studio band. That’s Graeme Pogson on drums, Luke Hodgson on bass guitar and percussionist Phil Binotto.

“That was a traditional recording process,” he tells us. “We just set up in the live room with drums, bass, synthesizers and percussion and tracked through about 16 channels. I would then take them away, chop them up and turn them into songs.

“I’d have these beds of great grooves, and then I’d write songs and arrange things out of those grooves.”

While the processes of many of the tracks on Boy left Mike soul-searching in solitude, Feeling of Love with Californian funk musician, vocalist and producer DâM-FunK sees Mike in full collaborative mode, adopting a less grounded, more universal message. We’re not seeing Mike looking inwardly on this track, that’s for sure.

In a studio in LA, DâM, who’d been discussing the idea of working with Mike for some years, laid down chords on his Roland Alpha Juno, worked with Mike on vocals and “brought a level of songwriting that I hadn’t thought about in the context of that tune”, says Mike.

We suggest moving away from the ‘who’, and on to the ‘what’ of Mike’s studio. “Yeah, let’s talk gear!” Mike echoes. There’s fair reason to be enthusiastic, as he sits surrounded — like a dragon in a cave — by a shimmering treasure trove of instruments.

He commemorates his trusty Roland Juno-60, not just a staple in the Harvey Sutherland sound but by many artists inspired by the sound of the 80s.

Mike’s standout synthesizer used on the album was the Korg MS-20, of which he now owns two. “​​You can really do anything with it,” he says. “I’ve made a lot of basslines, lead sounds, disco toms, kick drums, white noise; there’s so much you can do with an MS-20. It’s just so intuitive.”

When arranging his drums, he primarily uses his Akai MPC2000XL, but his love for vintage samplers doesn’t stop there.

“I collect a lot of 90s samplers,” he proudly tells us. “I have a Roland MKS 100, which is just a really basic four-voice sampler with about 1.8 seconds of memory on it, which one of my old bandmates found on the side of the road. He brought it in and our tech fixed it up for me, and so I made the drums for Slackers on that.”

Those drums – and many drums on the album – were processed through Mike’s broadcast console, a Chilton CM4. “It’s got heavy EQs, they’re almost filters, and so you can shape sounds and drums out of it well,” says Mike. You can see the Chilton CM4 in action on Mike’s live dub version of Jouissance.

It’s tough for Mike to divulge MusicTech readers in every effects pedal and technique used in each track on the album, he admits, because of how much the studio gets passed between musicians.

“The way [Swimming Pool Studio] works is that we all share it and do something differently, so every time you come in, something is patched in a different way and you have to either use what was there before or undo [it],” he explains. “It’s a moving beast in here. There is plenty of room for happy accidents.”

The voice of Harvey Sutherland

Mike’s voice is prominent on Boy, drenched in honey-like effects that make it sound like dripping gold. Mike’s singing portrays his vulnerability throughout the album for listeners who haven’t heard him sing before.

“It’s really hard to assess your own vocal. So I’ve worked closely with David Franski, an old friend of mine and a great engineer. He’s mixed a lot of my music over the years, and he actually came and acted as my vocal producer for that one. You get to step away from being the producer for a minute and actually just try and be a singer.”

“For a lot of these tunes, I treat my vocals as another synth. I’m doing lots of stacking and layering of all the harmony parts and doing a lot of processing in the box — a lot of stuff with SoundToys MicroShift.”

“Then there’s a track called Holding Pattern on the record, which is actually me singing. I’m trying to push myself to do more in that space.

“‘Boy’ is a term of endearment. It’s very much about me, my dad and his dad. There’s this intimate knowingness of how I relate to my dad. It’s a weird shared [sense of] humour.

“It’s about not taking yourself too seriously and knowing that you’re a little bit fucked up but finding the humour in that. It’s the knowledge that you’re trying to do a bit better. We’re strange but we’re still here.

“[The album] is definitely more personal,” he says. “It’s me reckoning with my own behaviours and growing pains. There’s an intimacy to it that is not necessarily dancefloor-focussed but I’m trying to represent it through the medium that I’m used to, which is a different dancefloor.

“It’s a more intimate dancefloor. It’s a lounge room on your own or in a little group; that’s the trajectory of the dance music I’ve been making.”

Harvey Sutherland’s intimate dancefloor funk has pushed itself to new heights on his debut album, Boy. While past releases have been clean and polished but faceless, here, he’s shown his work.

We’re not just hearing Harvey Sutherland. We’re seeing and hearing Mike Katz. It’s a transformational time for the producer and a pivotal moment for his fans.

Boy, the debut album by Harvey Sutherland, is released on April 29 2022.