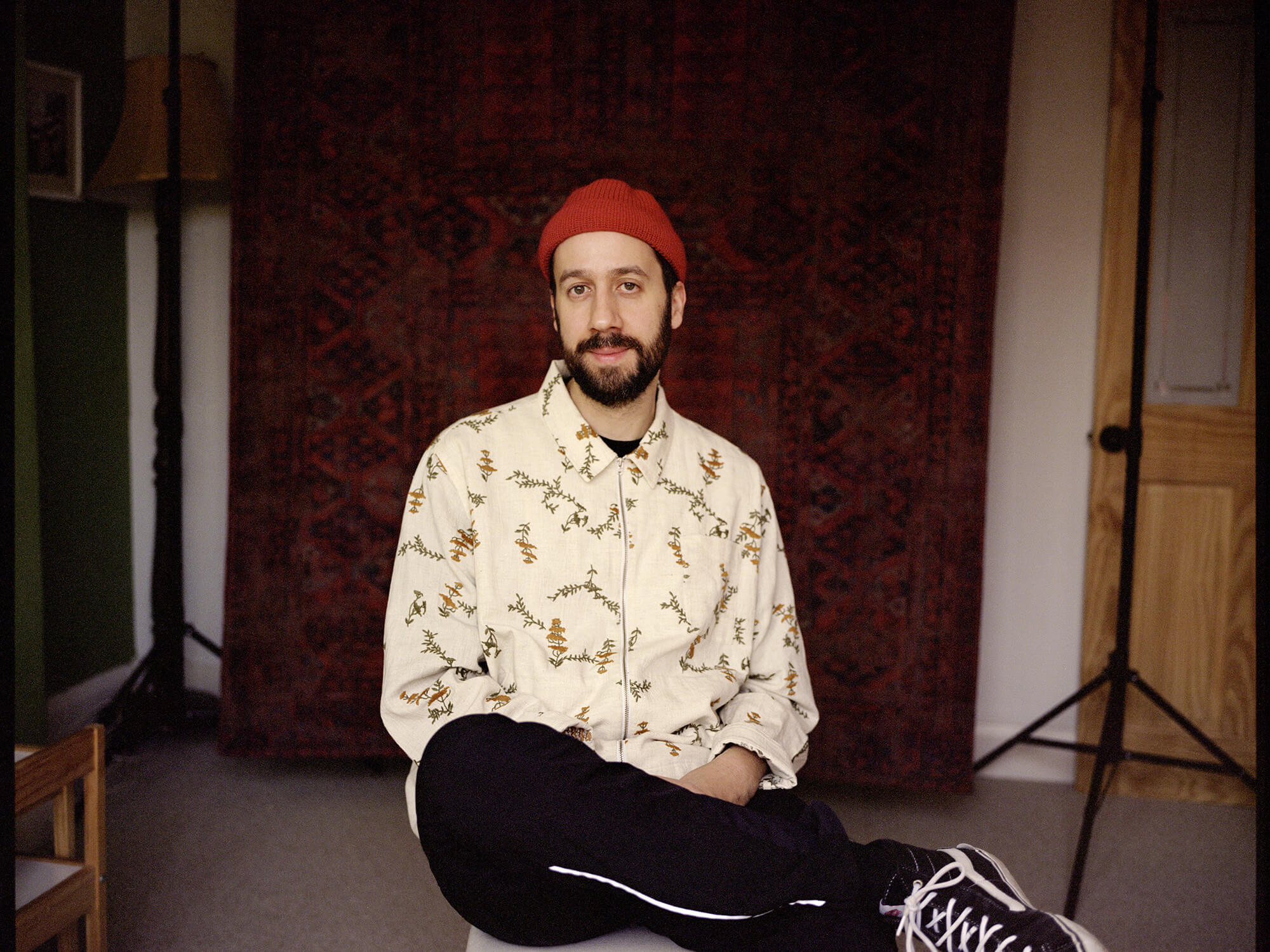 Putting in The Work: How Gold Panda created his long-awaited fourth full-length album

After more than six years away, the electronic producer has returned with an emotive new record. We learn how parenthood, therapy and giving up drinking fed into his latest chapter.

“I like to think that all my music already exists,” says artist, producer and sample-lover Derwin Decker, AKA Gold Panda. “I just need to go through my record collection and find it.”

Dicker is talking about his music-making process and latest release, The Work, from his car while his youngest daughter sleeps in the back seat. It’s his fourth album and first in six years, though that gap doesn’t mean things have been on hold. Instead, he’s been adjusting to new ways of working, living and thinking.

“My eldest daughter is three-and-a-half and I found it a tough transition when she was born,” he says. “I realised eventually it was down to time management but I had put a lot of pressure on myself to get music done and it wasn’t happening.”

The Work is the sound of change, of an artist evolving but still tapping into what made him so intriguing in the first place: heartfelt, emotive electronics. His sample-based approaches are still evident in his music and the new album bristles with creative energy, waltzing between different styles and beats. You can certainly trace the reverberations between this and the third Gold Panda album, 2016’s Good Luck and Do Your Best. It’s just coming from a more satisfied mental space.

“It was about capturing what I’d done to get to a happier place where I could create freely. I’ve stopped drinking, started doing exercise, therapy… The phrase “the work” is something you hear a lot in self-help and therapy conversation. I always liked it even though I’m very work shy and would prefer to lounge around doing nothing.”

An uncle, who was one of the masterminds behind Strongroom Studio in Shoreditch, London, was the first to ignite Decker’s love of music. As a teenager, the fledgling producer acquired an Atari ST and Akai S300XL alongside a cracked copy of Steinberg’s Cubase. Soon he was looping whatever he could purloin from his dad’s record collection.

“I went through different musical phases and did some gigs when I was in my early twenties with a Game Boy and an [Akai] MPC,” he says. “I remember going playing a party in Hackney Wick which was pretty raw. We came out of the station and there was a car on fire. The party was a sound system in a room full of mattresses with a bunch of crusties and some alsatians.”

A subsequent stint working in record shops led to a job at Pure Groove Records in North London at a time when artists were being signed via MySpace. Inspired by these success stories, Dicker set up a profile and ended up getting discovered too.

“I created a MySpace page and added some tunes without any details about my identity. I uploaded a few photos but the aim was to keep it mysterious. Some blogs picked it up and Ghostly International contacted me. It really started from there.”

In his early musical days, Dicker experimented with an array of sounds fuelled by a love for hip-hop and a passion for collecting records. It was only after he came up with his 2009 track Back Home, that he found a sonic identity he was happy with.

“Back Home was the first piece I created where I felt like I discovered a way of making music that worked for me,” he says. “It featured very small samples, an approach that I followed after becoming more aware of the need to clear them. How could I make a sample unrecognisable? Just take one note, then pitch it around, take another note, then layer it over. That’s how my process evolved.”

It was at this point that he came up with the moniker Gold Panda, a name inspired by warm vinyl crackles and the “fuzzy music” he’d started producing. “I went through different name combinations by picking a colour and an animal. But Gold Panda stuck. Now I’m 42, I kind of regret it but I didn’t know this was going to be a career.”

The creative processes that surround the 11 tracks on The Work stem from Decker’s collaborations with Jas Shaw of Simian Mobile Disco. Under the name Selling, their production process was based on having their equipment rolling and ready to record live takes.

“With this new LP, I recorded everything in a similar live setting, then returned to edit afterwards,” Dicker says. “That first edit would never be that different to the final version. I also invested in a new Nord Lead synth. I’d never really thought of myself as a synth person before until this record.”

In the past, it’s been Decker’s immersion in samples that has chartered his production course, but the acquisition of the Nord Lead Rack 3 has proved a defining moment for his latest material. It helped make the recording process easier than ever before.

“A great interface and the ability to get brilliant sounds made me buy it,” he says. “That was it for the record – live takes, a new synth and having everything ready to record. It meant that when I returned to the files, everything was ready to go.”

Now settled into a busy family life, Dicker has carved out a productive music making routine. Having recently moved into a house, he initially set up a studio in the front room before having a bright and open space built in the garden.

“My past experience of working in studios is being in a small, dark room, so I wanted a window and a door with glass,” he says. “Being in a light environment makes me very creative. I’ve also always been comfortable making music where I live. I like to rely on home comforts.”

It was in this domestic setting where much of The Work was created, with the MPC 1000 sampler beating at its heart. Dicker is also a fan of menu diving and finding surprises, particularly within the studio, while continually digging for samples. The thrill of the chase binds everything together.

“Using samples is how I’ve always made music, particularly coming from this hip-hop background,” he explains. “I love sitting with a cup of tea and going through piles of records. When I find something I like, I sample it to the MPC, then I’ll have it playing while I drop other sounds and beats on top.”

The character of a Gold Panda record usually reveals itself to Dicker as the work rumbles on and sonic palettes are placed alongside each other. Particular tracks will sound like they need to exist in the same world but these samples can come from any genre, style or source.

“You’ll often find me in charity shops buying James Last records, BBC compilations or records with the greatest hits of a certain year as instrumental covers,” he says, with a laugh. “That’s why I only use small samples, as they are such terrible records. When people ask me what my favourite albums of the year are, I never know what to say, as I’ve been listening to all this weird old stuff.”

Alongside the album release are the Gold Panda live sets, which Dicker is hoping to scale up in line with his ambitions. He’s been toying with the idea of creating visuals and offering his fans a more improvised take on his material.

“I’m less bothered about recreating the record than I used to be,” he says. “After 10 years of playing my songs, I actually found the MPC to be quite restrictive in a live setting so I’ve changed that so I can perform more freely.”

This renewal of energy and approach is part of a new attitude. Rather than searching for verification from others, Dicker is now aiming to satisfy only his own musical impulses.

“As a new producer, it’s best to try and focus on your music and work,” he says. “Don’t seek too much endorsement as no one quite knows what they want or like. I spent ages with people telling me my music was too weird or wasn’t not commercial enough. Yet my first record was huge for me and I went round the world with it.”

Dicker advocates that artists embark on their own independent paths but concedes that the digital world and the power of the algorithm has made it tougher for emerging creatives to break through. Luck is just as important as skill, if not more so.

“It’s not a meritocracy, it’s not about how good you are at music,” he says. “You could be making the most amazing stuff but no one will know about it. The best thing to do is not get disheartened and stick at it. You never know when people might discover you.”

With The Work in the wider world, Dicker is now busying himself with more projects, including an ongoing tour as Gold Panda and a trip to India with Anushka Shankar, a sitar player and the daughter of the legendary Ravi Shankar. There’s talk of a potential release together, while he’s also creating visual elements for his gigs.

“I’d like to make another record as soon as possible,” he says. “That’s when I’m happiest, just making music. But playing live is where I make money, although I’ve always found it stressful. I’m trying less gear and smaller shows to see how that goes. Ultimately, I’m just trying to have fun again.”

Visit goldpanda.info for more. The Work is out now.