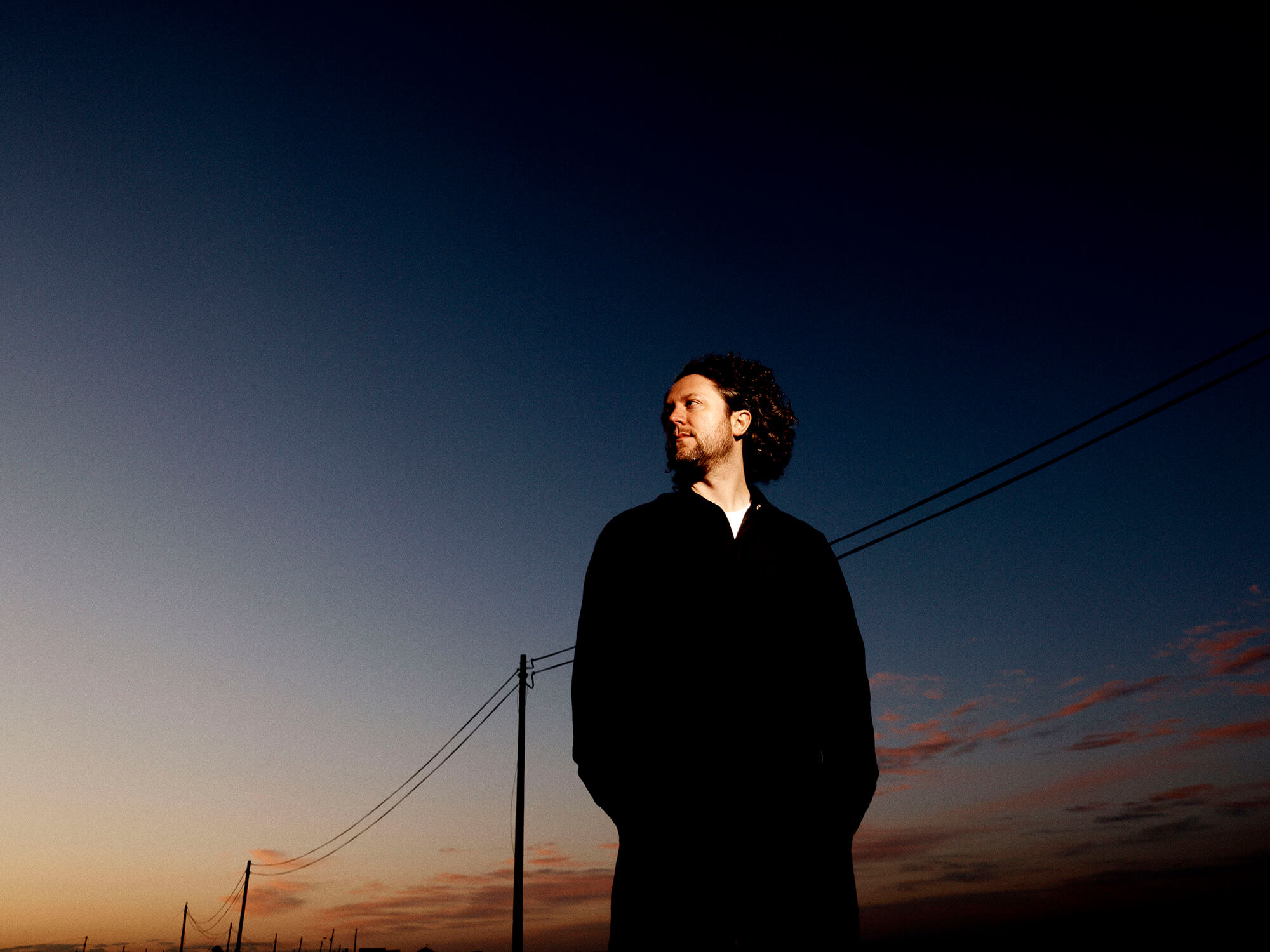 George FitzGerald: “With enough imagination, you can make everything sound like anything – your imagination is the limitation”

As he prepares to launch his cosmic new album, Stellar Drifting, we soar into his studio and learn how he processes NASA’s work into glistening synthwork.

When British producer George FitzGerald looks up at the night sky – at the endless black abyss dotted with stars and planets – he sees unity. The cosmos serves humanity as a means of imagination and wonder; anyone can gaze into space and dream up their own version of what’s out there and how far it spans.

It’s a means of escapism that connects the entire human race, which FitzGerald channels into music on his new album Stellar Drifting, out 2 September on Domino.

“This isn’t a sci-fi record. There are no guys in space suits on the album cover. The space element is important, but it’s more [about] what that represents,” FitzGerald says from his home studio in London. “Space is theoretical to 99.99 per cent of anybody who’s ever lived. What does space represent to people? It’s an aspiration. To me, it represented the furthest point away; the grandest vision of humanity.”

Growing up in the thick of London, a major city rife with light pollution, FitzGerald wasn’t able to effectively engage with this experience for most of his life. It was only when he was touring the United States for his previous album, All The Must Be, in 2018 that he truly felt the magnitude of what the cosmos represented.

He had a break from touring for a few days in New Mexico, a state in the US with a mostly desert topography, and he decided to spend that time driving deep into the wilderness, staying in disparate motels, and soaking in the desolate surroundings.

“People from Europe [and] people from a small island like the UK are fascinated by these enormous open spaces that are in the States. You can just drive and there’s nothing. I got into stargazing there,” says FitzGerald. “I really do just sit under these things all the time. How could you not look at them? They’re the most beautiful thing.”

It was a couple of years later when FitzGerald had the idea to channel that wonder he felt into music. At the time, he was living in the complete opposite scenario – one where exploring wide open spaces and seeing the true breadth of stars was nearly impossible.

It was 2020, in the darkest days of the pandemic, and being unable to travel, FitzGerald often found himself in a similar position to the rest of humanity: alone in a windowless room – his London-based studio.

It was a harrowing experience, but also one that FitzGerald recognised unified everyone on Earth at the time. After that realisation his, mindset moved to one of service; he wanted his next album to transport its listeners to new places.

“The most powerful message of electronic music [and] the various strands of dance music has always been the escapism of it. If you go back to the roots of dance music, it wasn’t like escaping to space, but there was some of that in there. Gay or marginalised communities created this music. It’s about escapism.” 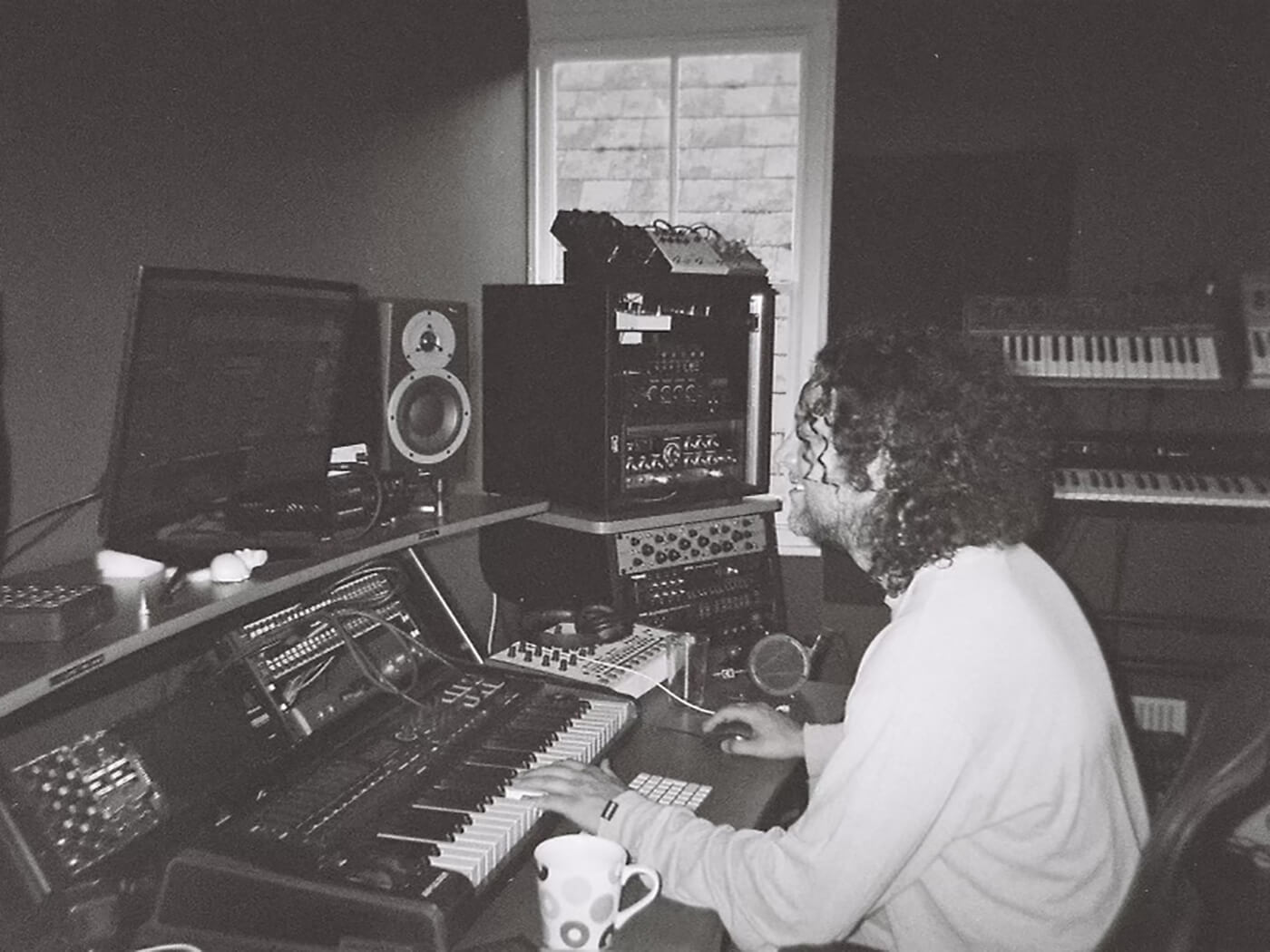 During the conversation, FitzGerald mentions the International Space Station where space agencies from five different countries work together to maintain this impressive space station orbiting the Earth to learn more about the universe.

NASA recently shared the first photos from the James Webb Space Telescope in July 2022. The telescope is another international collaboration between different space agencies (NASA, ESA, and CSA), and it’s images continued to bring the world’s population together.
Millions of people were looking at these new photos of the universe and having the same response; imagination and awe.

“[Space] gets you out of yourself. It reminds you that we’re tiny and insignificant and there’s something really nice about that,” says FitzGerald. “You occasionally have these moments like that where you think humanity maybe isn’t doomed. There are actually people out there doing amazing things. Seeing new things.”

FitzGerald is not in the position to see new corners of the universe through a telescope orbiting the sun at a distance of one million miles away from the Earth. But, with the help of a few plugins, he was able to transform that intention into music.

NASA has been collecting images of space and the universe for decades now, and all of those photos live on a public internet database. All across Stellar Drifting, FitzGerald took those images and converted them into sounds which he then manipulated into the album’s ten tracks.

One plugin he uses is a free Max For Live device called Image2Wavetable. It’s an effortless process: take a PNG file and drop it into the Ableton Live rack. It then turns the image into a single cycle waveform. Using Serum, FitzGerald was able to drag the waveform into the oscillator window and start synthesising sounds with it. 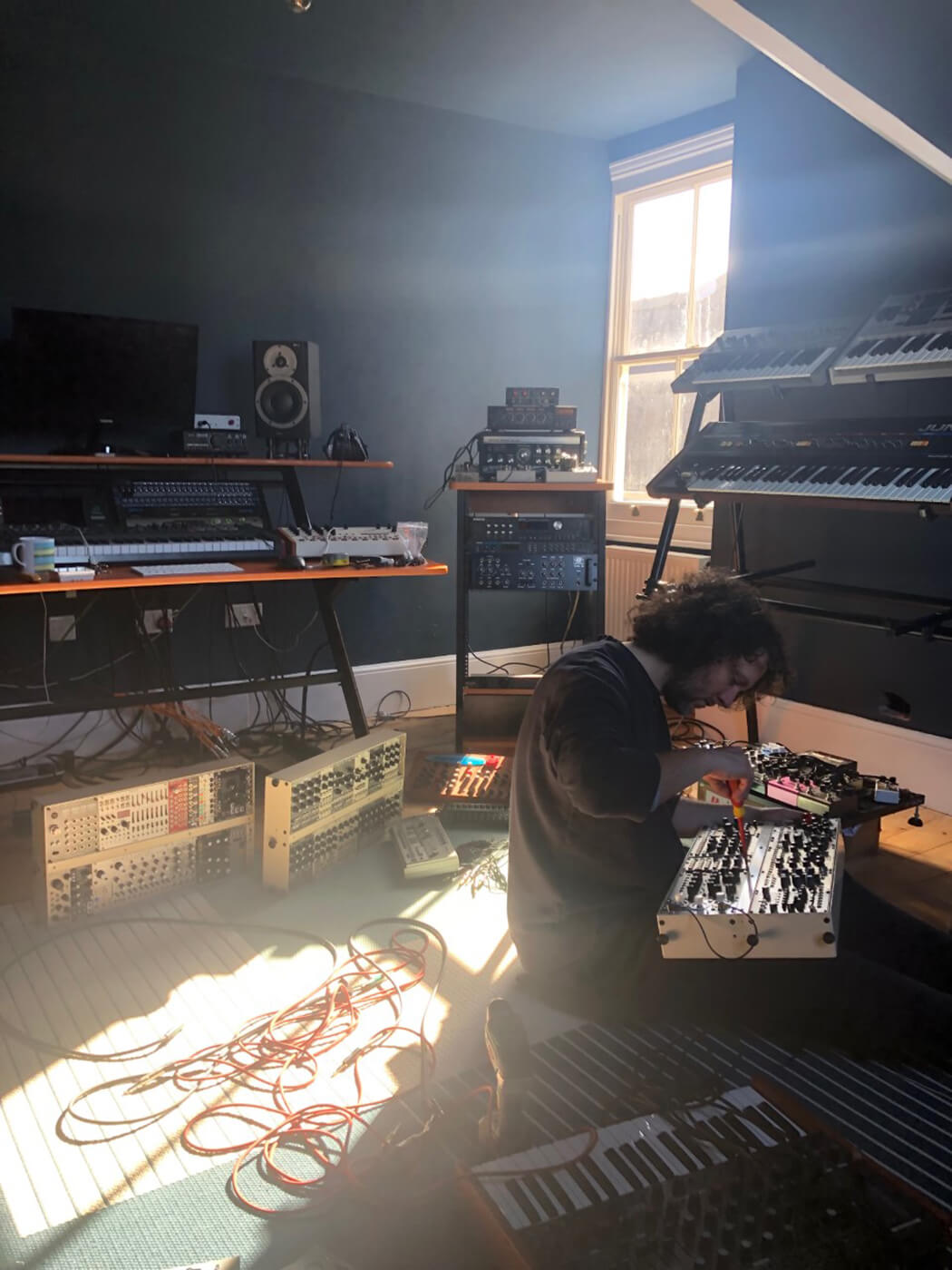 The producer was literally turning images of space into music; capturing that sense of imagination and wonder and converting it into audio. And, what’s more, producers of any skill level can access these techniques. They don’t require esoteric knowledge of modular synthesis or the accolades of a seasoned producer and touring artist like FitzGerald. They are simple ways to experiment, and he used them as building blocks for the album.

“It felt like a cool idea this time to tie everything together with these sounds that have been made from images and recordings of celestial bodies,” FitzGerald says. “The beauty of modern DAWs is that with enough imagination and enough know-how, you can make everything sound like anything. Your imagination is the limitation.”

Just as looking at the stars activates his imagination, bringing that same mindset to the album was important for no other reason than it was enjoyable to approach the production that way.

Some of the NASA images FitzGerald sorted through sounded awful. Others made sounds that are vastly different than what he expected. It was on him to dig through what worked and find out how to make it work on the album.

FitzGerald also grabbed audio recordings from probes floating around the solar system, the quality of which was often not very melodic or harmonic. So he had to get creative with how he applied these sounds to Stellar Drifting, which – like much of his previous work – has a strong sense of melody and song form.

“This isn’t a concept record where I was like ‘I’ve literally made every single sound on this from an oscillator that I’ve built from a photo,’” FitzGerald says. “Giving the sounds a DNA over and above the [Roland SH-101] that I bought ten years ago was really fun,”

It’s also thrilling for FitzGerald to know that sounds derived from astronomical sources aren’t what people may expect in listening to a record.

You might think that the bright and ascending arpeggio at the beginning of Rainbows and Dreams was a product of some luminous image of space. The same goes with the swirling and coruscating pads that run throughout Setting Sun. But FitzGerald chooses to remain nebulous about the sources of various sounds. 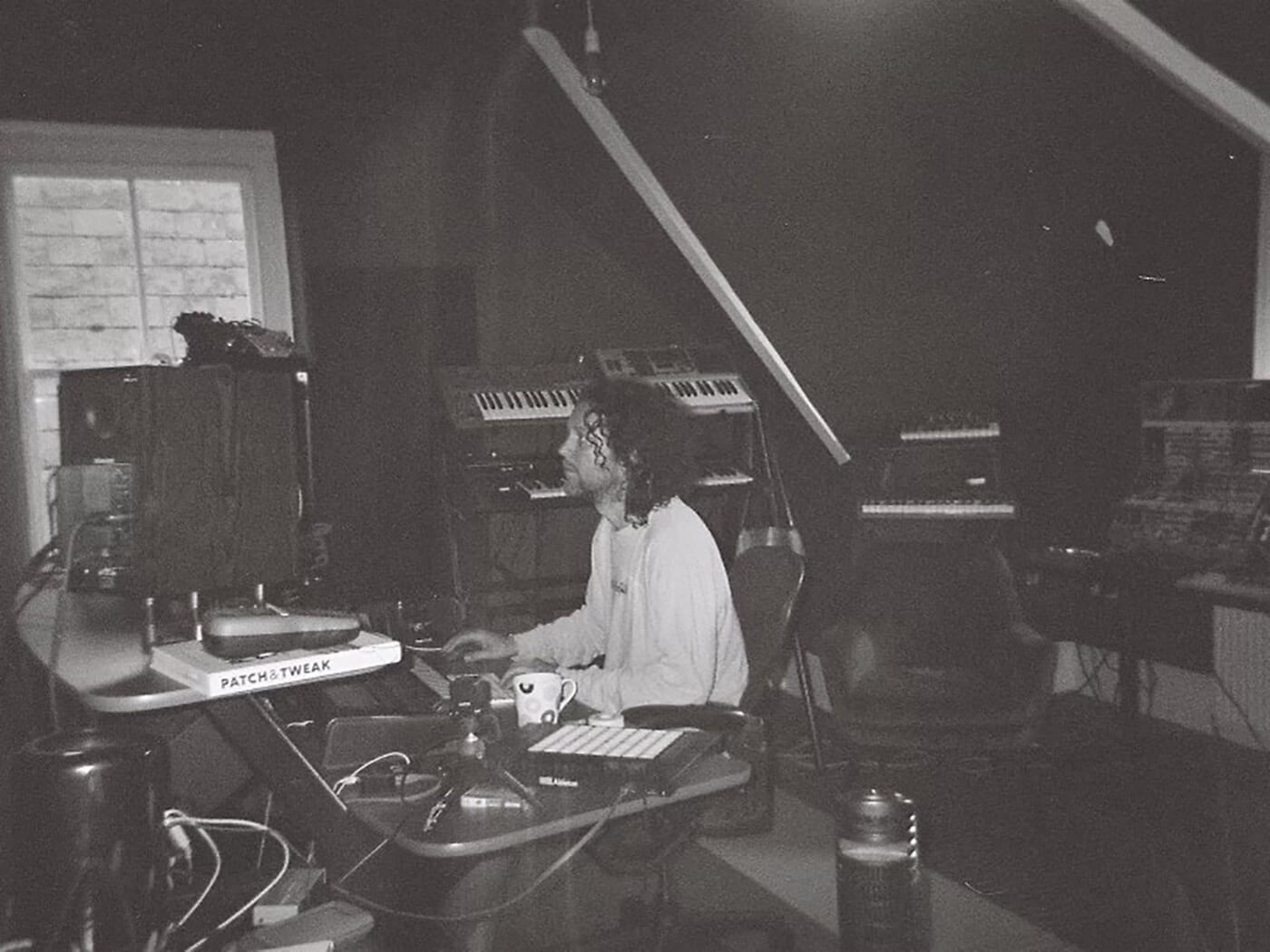 “I thought about listing all of them in the sleeve notes,” FitzGerald says of his space-sourced sounds. “But I think it’s a fun guessing game for people – it’s often not the [sounds] that you’d think. It’s not like everything sounds like a sci-fi film.”

It’s up to the listener to take in the album and imagine where each sound came from. Whether they have the technical insight to discern the sound of FitzGerald’s Roland Juno-6 or they’re a newcomer to electronic music, everyone hearing Stellar Drifting is unified in that experience of exploration. It might not be as exciting as exploring space, but the sense of wonder and imagination is there.

Stellar Drifting is out 2 September on Domino.