Ed Harcourt on establishing and maintaining a career as a songwriter

With a multi-faceted career as journeyman songwriter, composer, producer, live performer and highly regarded Mercury Music Prize-nominated artist in his own right, The prolific Ed Harcourt’s perspective on the music-industry landscape of the 21st century is invaluable. We take a trip to Wolf Cabin – Ed’s home studio and writing space in Oxfordshire – to glean insight from a man with seemingly limitless creative energy. 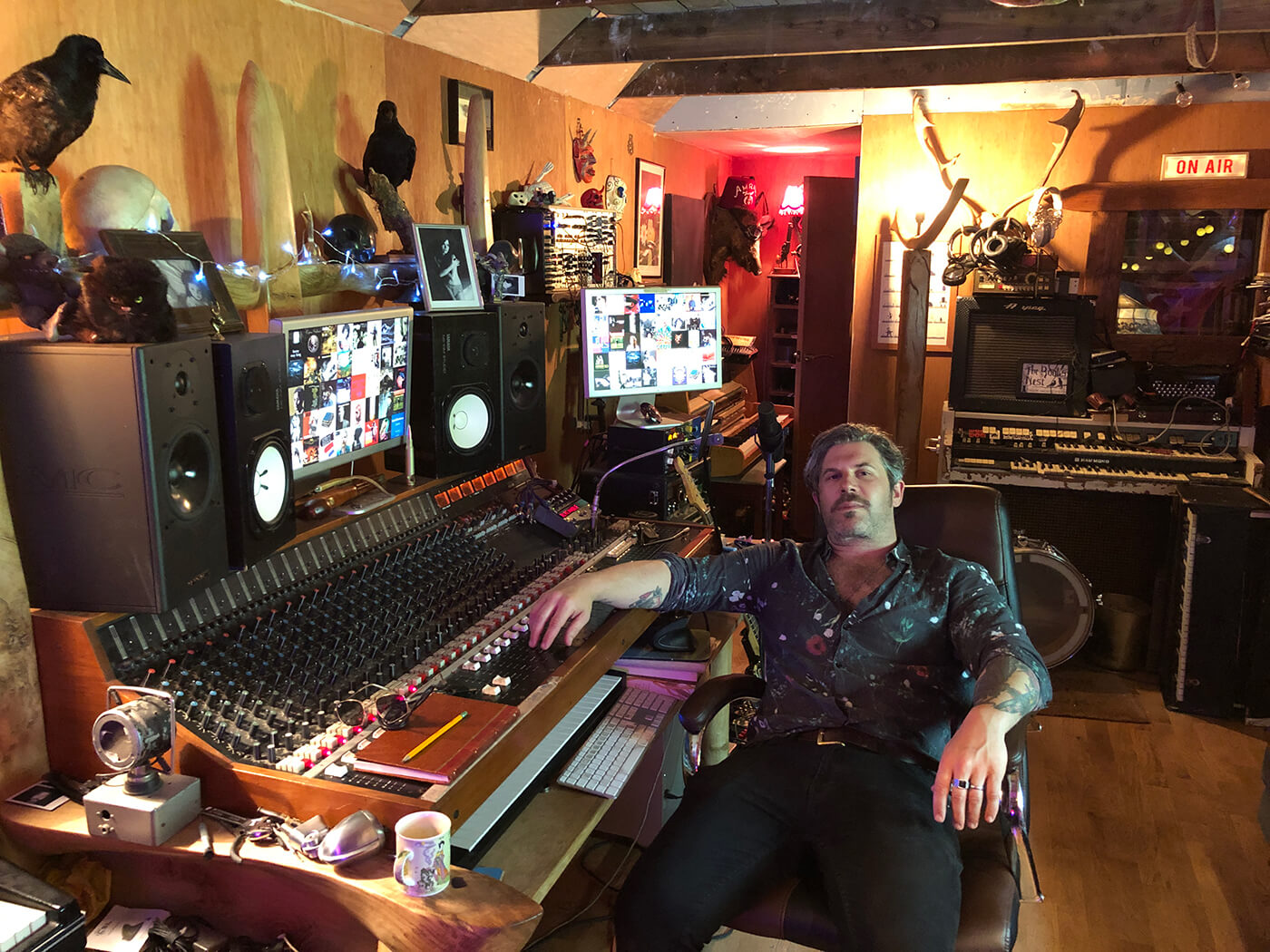 When embarking on a career as a musician and particularly as a songwriter, there will inevitably be difficult and challenging periods; the real-world pressures of maintaining an income, the slog of dealing with an often unsupportive industry and of course, simply keeping creatively stimulated and feeling that inspiration to write worthy work. Ed Harcourt is a man who has faced all these challenges – and more besides – head on and has still emerged at the end of the decade as a songwriter who commands a huge amount of respect from his peers.

“My career has had a lot of peaks and troughs,” Ed tells us. “I think that’s pretty normal for a lot of people. A lot of people get a degree of success and they just work hard to maintain that. I think for my work, I want people to either really love it, or really hate it – that’s a good thing. It’s better than people just being indifferent – following your whim and not trying to please everyone is something to strive toward. That’s really the only way to survive, creatively, I think.”

We’re speaking to Ed Harcourt in his Wolf Cabin studio, based at his home near Oxford. It’s a treasure trove of gear, instruments, memorabilia, art and style. Within minutes, we’re soaked in the creatively stimulating vibe of this Aladdin’s cave. We’re visiting Ed to talk mainly about songwriting and the compositional process, Ed is more well versed (no pun intended) than most, having also written with a plethora of high-profile, chart-topping artists, including Paloma Faith, Sophie Ellis-Bextor, James Bay, Marianne Faithfull and many more. But, of course, we can’t help but indulge in a short tour of the space.

“This studio was built here in my garden so I could literally turn things around incredibly quickly,” Ed says. “It’s really for writing, but I have been recording in here, too. The desk here at the centre is a Chilton QM3, which I actually acquired through eBay.”

Ed Harcourt first appeared on the radar with his debut record Here Be Monsters, which was nominated for the Mercury Music Prize in 2001. But his wasn’t an overnight success story. Prior to this, Ed had already experienced his fair share of setbacks. Ed takes us back to the beginning: “Well, it was my mum who was the first to notice that I was quite musical. I was always tapping out rhythms on furniture etc, I obviously had a little bit too much energy. So she thought it’d be good for me to put my focus into something that would channel that a little bit. So she got me piano lessons at the age of nine – weirdly, with Michael Crawford’s mother – in Eastbourne down in Sussex. I was kind of a regular kid but as soon as I started playing, I realised I’d found my passion. When I got to around 11 or 12 I learnt the cello and then gave that up and started learning saxophone.”

When Ed’s teens dawned, he naturally felt drawn to contemporary rock such as Guns N’ Roses and Nirvana, which inspired him to take up the drums. “I’d spend days trying to learn drum parts from their songs. I did everything upside down, because I’m naturally left-handed but I write with my right. I learned the drums upside down and learned the guitar and bass upside down, too.”

Inevitably, a band was formed. “So when I was 15, I started a band with a bunch of friends and that’s when I first started actually writing songs. The first song that I wrote that got released had me singing and playing piano. It was a B-side, because the majority of the stuff the band did was all very heavy. It was a song called Losing My Hair and was about a guy who loses his hair due to stress and his wife hates him. I don’t really know where that idea came from. I obviously loved being able to sing and to play, but once I learned how to write a song, it changed everything for me.”

Ed’s focus on being a songwriter and an artist led to his first brush with the music industry. “So when I was around 18, I got signed to Warner with a band called Snug for an album deal, but we got dropped when we were making the album after doing three singles. I was very angry, and just thought, ‘Fuck this’. So I went back to Sussex with my dad and got a job as a chef. I was very lucky, because I didn’t really want to live with my parents and my grandmother lived in this huge old farmhouse. There were quite a few rooms and a lot of space and there was a music room with a baby grand piano. I put a drum kit in there, too. I had a 4-track Tascam cassette tape machine. At that point, I did shifts at work so I’d come back and wouldn’t sleep; I’d just drink red wine and write around three songs a night!”

“Some of that stuff was absolutely terrible, it has to be said,” Ed remembers. “But it led to me composing my first album Here Be Monsters. It was around that time that I got into singer-songwriters in a big way. And I thought about giving the songwriter-at-piano thing a shot. I was listening to lots of Tom Waits, Randy Newman and Harry Nilsson. But I didn’t think of it as like going into the industry with a new approach or anything like that, I was just writing for the love of it.”

Following the success of Here Be Monsters, Ed released seven further records. Rich with lyrical, thematic, compositional and sonic ideas, his work is lauded by critics. Of particular note is his family-themed 2010 record Lustre, the confessional, stripped down Back Into The Woods and his Flood-produced 2016 epic Furnaces, which tackled topics such as climate change, capitalism and toxic masculinity.

“I like albums that have thematic links between songs,” Ed answers, when asked if he approaches album writing conceptually. “But having said that, you don’t want the process to be too contrived. You can write about whatever you want. I find that as I’m making it, the album reveals its concept. It can start out as a collection of songs, but I think that cohesive thread very often develops of its own accord without you actually going in saying, ‘Right, I’m going to make an album about ‘X’.

“Looking back on my records now, I can generally see the themes they largely deal with, which I couldn’t really understand at the time. Here Be Monsters is kind of about coming out of the teen years and into adulthood. It’s a coming-of-age record. From Every Sphere is kind of about death. There were a few deaths in the family at that time and I had a bit of an obsession with it. Then my third record Strangers was sort of about new love, that was my love album in a way. Then Lustre was all about becoming a father and the responsibility of being a parent – which is bound to make most people vomit, I’m sure!”

The way that I live

Despite his rich canon of work, Harcourt isn’t defined by his individual career as a singer-songwriter. He’s fought against – and adjusted to – an industry that has been going through perhaps the biggest seismic shift in its entire lifespan. Ed has furthered his career by developing various other roles for himself in the industry, including putting himself out there as a gunslinging songwriter for hire and as an innovative, hands-on producer.

“I’m more worried about new songwriters,” Ed admits. “I think it’s very hard for new people coming in because of the way the industry has shifted. It’s difficult to make a living as a songwriter in the streaming age. I can’t help but feel that the artists and creatives are routinely shafted in the industry. It is depressing, but you have to find a way around that. It’s a bit like austerity, the gap between the rich and the poor has got wider and the gap between multi-million-selling artists and everyone else is huge. So you have to find different ways of surviving.

“I do that by not spending all my time as a songwriter. I’m playing on albums, I’m co-writing with other people, I’m producing and trying to do soundtrack and advertising work for film and TV. Whatever I can do to increase my income from the music industry, I will do. I’d say you really do have to be quite savvy and keep things going.”

Though some artists may balk at the concept of expending creative energy on writing for advertising, Ed is more comfortable with the practical reality of this path. “I actually learned a lesson from an advertising commission I did a few years back. I did a song for Burberry called The Way That I Live for their Christmas campaign. It’s kind of waltzy. But initially, I wrote two songs and Burberry were like, ‘No, these don’t really work.’ They gave me 24 hours to get a song. So I just didn’t know what to do. I ended up going full Keith Richards in Jamaica and drank a bottle of rum. I sat down at the piano until around 4am and wrote this song that I was really happy with. Because I’d drank the rum, I felt like I was kind of on a ship and that’s why it  has a kind of rollicking, rolling ‘on the sea’ vibe to it. I remember sending it the next day at 10am really hungover. I’m not recommending this specific approach, by the way! What I’m saying is that for some reason getting a new mental attitude on what I was doing helped me out of a rut.

“Everyone was really happy with the song, though, which is the important thing. So the point of the story is being put into a new, panicky situation and having that very, very tight deadline gave me motivation. I had to go for it and it could either be the worst thing in the world or it could be the best. Because I was doing this for an advert, it felt a bit weird. In this day and age, it’s pretty standard, though. If you think of the greats of music, even people like Mozart were commissioned by the wealthy and the aristocracy.”