With her career as a touring and recording drummer on hold due to COVID-19, Emily Dolan Davies switched her focus from the stage and studio to online drum service, as well as a regular vlog series designed to help musicians around the world reap inspiration from her remarkable experiences. 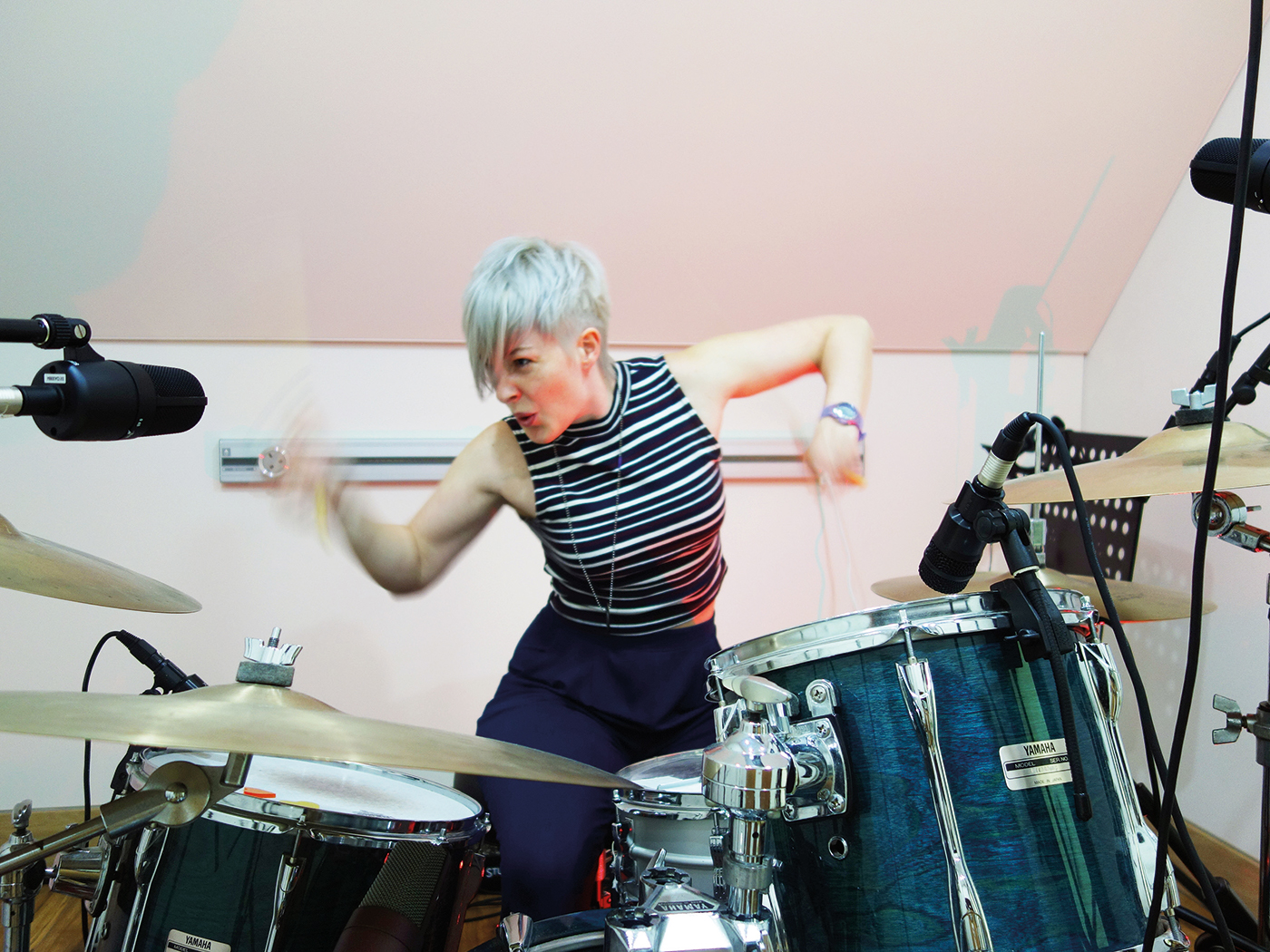 We’re always keen to point out that, in today’s always-connected world, there are infinite ways to get in touch with other musicians, be that to collaborate, remix, discuss or work together on mixing a track or recording instruments. The amount of bespoke websites offering such services increases every day but few can claim to offer the kind of of one-on-one attention as EmilyDrums.com, a drums-on-demand service run and managed by seasoned session and touring drummer Emily Dolan Davies.

Emily has toured and performed with The Darkness, Bryan Ferry and Kim Wilde, among other high-profile artists. We speak to Emily about her online drum portal, her flexible approach to the kit, and how the ongoing lockdown has resulted in a shift towards an online model for professional music creation.

MusicTech: How did your enthusiasm for drumming come about?

Emily Dolan Davies: It started in school, I went to this regular secondary school in North London. But I’d been brought up in a musical household and I’d always really loved music. Though whenever I tried to play instruments, they didn’t make sense to me theoretically. Chords and notes eluded me. At school, I soon became aware that there was a drum club starting. I was the shyest kid you could ever meet but I was keen to give it a try. I went into the club, sat down at the kit and it all just kind of clicked straight away. It just made sense. There was something in me that just felt at one with the kit. From that moment on, I fell completely in love with the drums and I knew that I wanted to do this for the rest of my life.

After that, I got involved with bands and would go along to blues jams and things like that. I got a fair bit of grounding in that world. When I was about 14, I realised that I wanted to do this professionally. I just needed to work out how. I couldn’t quite get my head around music college, I was really fearful that I’d come out sounding like everybody else, although I’m sure that was just paranoia. Instead, I got out there and started playing live.

MT: How do you typically prepare for a live performance?

EDD: First, I learn the songs! I’ve been touring with Kim Wilde for two years in a double-drummer situation with a drummer called Jonathan Atkinson. There’s a lot of electronics involved, a lot of samples, a lot of percussion. I cover a lot of the fills and the electronic side of things. For that, I need to know the songs inside and out so that I’m completely relaxed and able to devote my energies to performing. Kim is a pop artist but the show is essentially a full on rock ’n’ roll show. I had to fit in with that.

MT: Your website EmilyDrums.com has been a big focus for you recently. How did you start the service?

EDD: The doors first opened in 2015. I had just parted ways with The Darkness. I knew that, for the rest of that year, nobody would call me because they’d assume I was on tour with them. So I had the opportunity to sit down and think, ‘Right, what do I really want to do, what do I love about drumming and how can I maximise it?’ I realised that I love playing songs and I love working with a range of different people. The online sphere made sense and, aside from the fact that I had limited studio knowledge at that point, I knew I would make it work.

Typically, artists get in touch via email and give me an outline of their track. They might send a guide track, which can be as simple as an acoustic guitar and vocals or can have programmed drums to give me an idea of how they want the pattern to go. They could even reference a completely different song for the drum sound. I try to keep things as creative and free-flowing as possible because it’s a different experience to recording in a room with other people. I need to know the essence of what the artist wants to convey, then I need to tap into their energy.

I’m really into the song’s story: what the origins of the song are; what the emotions at the heart of the song are. I try and tap into that and keep it coherent. Once we’ve worked that out, it’s as simple as booking in a date with me and recording an MP3 and some sample stems to work out how each channel is sounding. Then we just go back and forth over email and apply revisions until the client is happy.

MT: Is your studio set up entirely around the kit? What gear do you use to guarantee consistent tone?

EDD: Yes, my studio is built around capturing good drum tracks. I’ve got some classic analogue preamps. I use an API 3124 and a Neve 4081 Quad Mic preamp, which are all based around some nice microphones. I wanted to keep things as simple as possible. I record drum tracks at a professional level and at an industry standard. That’s my sole objective. I tend to use an AKG D12 in the kick drum. I’m still learning about recording and I’m about five years into the engineering side of things, so I’m cautious about spending money on gear that’s inessential. I just wanted a great setup that lets me record my sound and that accurately conveys me. I don’t want to fall down the gear-hole.

My main microphones are the Audix ADX 51 mics, a couple of Coles mics, Røde K2s, and four Aston mics, which I’m so lucky to have. I use the Spirit as a room mic. I’ve also got the Stealth, which I use as an outside kick drum mic. I’ve got a couple of their laser-guided Starlights too, which I use for the hi-hats and ride, and occasionally the overheads. All of their mics are so versatile. You can use them on so many different things. I’ve got a Beyerdynamic M201 on the snare. I also have the industry standard mics, which come out for a variety of functions, and include the AKG D12, the Shure SM57, that kind of stuff. There’s a mixture of boutique companies and classics such as the Coles, as well as the ones that never go out of fashion.

I basically have a space that’s set up all the time and can provide a base level of microphones and preamps that will sound good across the board. When I first opened EmilyDrums.com, I barely knew anything about mic’ing drums, phase, and all those important considerations. I learnt as I went. It was overwhelming and terrifying, hence why I decided to minimise the things that can go wrong.

I use Logic as my central DAW. I try to keep my recordings as clean as possible, so the files are raw and mixable for the clients. When it comes to production, I don’t want to downgrade the quality of the project by applying my own treatment to the recordings.

MT: What advice would you give to anyone thinking about setting up a home-based music production service?

EDD: I’m sorry to any drummers reading this but the drums are a nightmare. They’re the biggest, heaviest and most impractical of instruments but there are ways you can make them work for you.

To start something similar to what I do, on a technical level, you need an eight-input interface and a drum mic pack, such as AKG’s Drum Set Session 1 or Audix’s DP7 set. That’s how I started, with a second-hand Audix mic pack and a simple eight-input interface that could be expanded to 16. It wasn’t the best sound in the world but I made it as good as I could. As time went by and more people booked me, I gradually upgraded mic by mic. I snuck in a preamp here and there and, before I knew it, I had a setup that I’m unbelievably happy with.

Had I started with this setup, I wouldn’t have known what to do. I wouldn’t have been able to use it to its full potential. I needed the basic stuff to start with. That’s a key piece of advice: don’t worry about getting pro-level stuff straight away. Use the tools you’ve got and make sure you’ve got your core bases covered. Eight channels should be enough. If you’ve got a kick, a snare, a couple of toms, a couple of overheads and a room mic, that’s great place to start. Don’t look at what other people are doing. Concentrate on getting the best sound you can with the gear you have and in the space you’ve got.

You might be able to create amazing lo-fi hip-hop loops thanks to the unique characteristics of your room, which, in a high-end studio, would be impossible to capture. Bear that in mind.

MT: As well as the EmilyDrums service, you also have your own vlog series. What prompted you to start that?

EDD: ‘A Drummer’s Guide To’ is a vlog series with a strange concept. When I was 14, I went to a drum clinic and watched a guy called Mark Mondesir and was massively inspired. At the end of the clinic, he asked if there were any questions. I was sat there desperate to ask him but I was so shy that I didn’t put my hand up. I always regretted that and I know there are more people out there who feel the same way in those situations. The idea was to document my experiences in a way that can hopefully help others, the 14-year-olds who know they want to do this professionally but don’t know anyone in the industry to ask. I want to be that person for them.

When I was coming off the road, I knew I had a bunch of clients booked in, ready to go. It got rid of my post-tour blues. It’s also wonderful for cultivating relationships with fantastic artists from all over the globe that I wouldn’t have met otherwise. I love the remote-recording world, and I want more people to be in it.

MT: What do you think are the biggest tests facing music-makers right now?

EDD: COVID-19 aside, we’re in a massive state of change. It all feels very fragmented at the moment. It’s hard for me to pass judgement on exactly what’s happening. What I do know is that being able to do things like my remote-recording setup, and having artists exist in a world that they wouldn’t have been able to 10 years ago, means there are phenomenal opportunities for people who don’t have a voice to make music and get it out there.

In the live world, it’s quite difficult. Tours are shorter and they get less funding. It’s been interesting watching all the livestreamed gigs during lockdown and wondering how that side of things could develop. We’ll just have to deal with what happens after COVID-19 and adapt to it. We will find a way to express ourselves. Creatives always do!

To use Emily’s drumming services, head to EmilyDrums.com.