Django Django: “You don’t need to wait for a producer or label to help you”

The electronic-guitar band explain the DIY production of new album Glowing in the Dark, synth option panic and why they always keep everything set up. 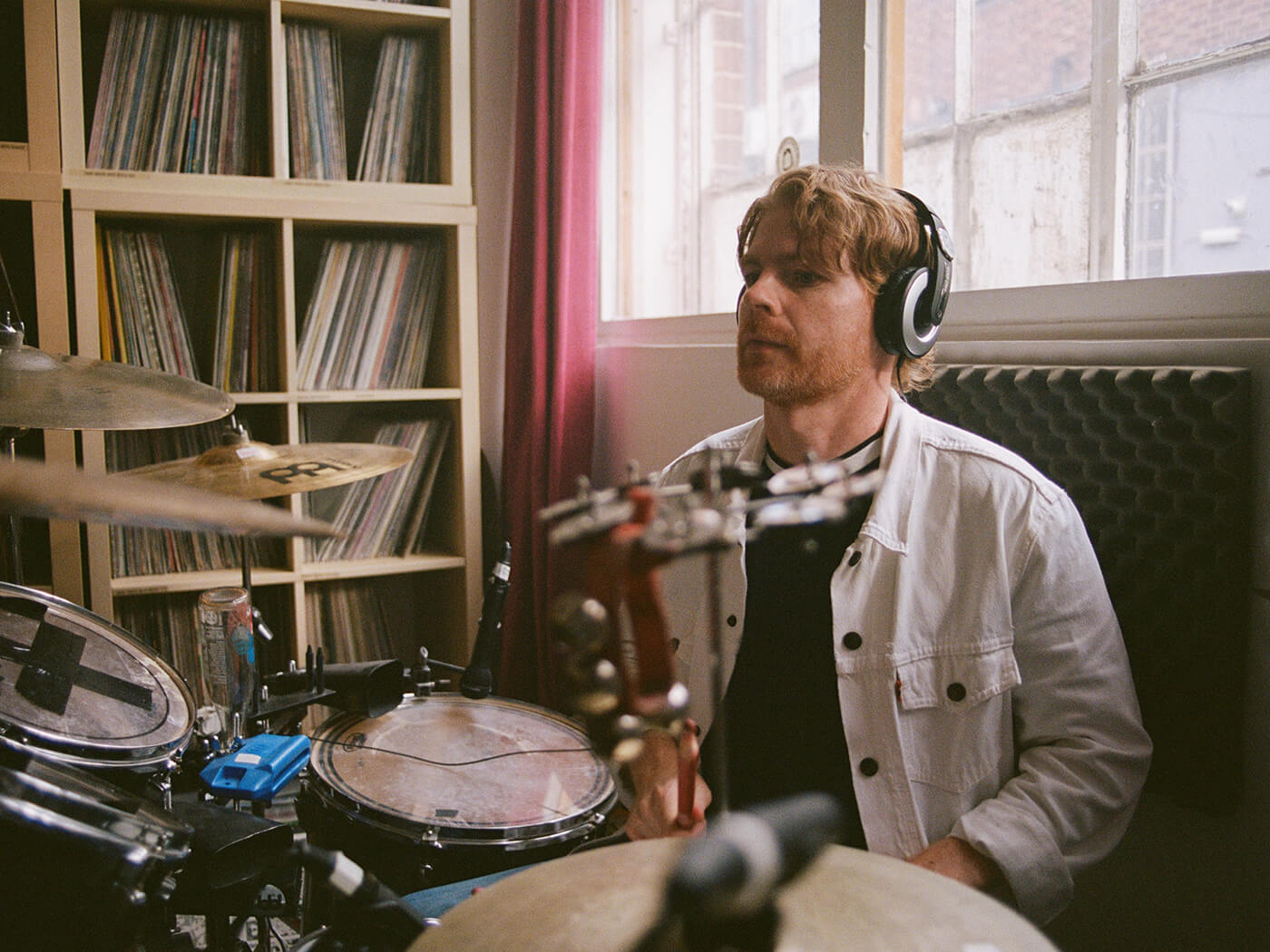 “Imagine the lockdown without any music or visual culture. Releasing music during this time seems like it might feel insignificant, but it’s been so important for many.”

Producer and drummer Dave McClean and keyboardist Tommy Grace are one half of art-electronic-rockers Django Django. They’re readying themselves to unleash their latest record, Glowing in the Dark and it comes during what is perhaps the most turbulent time many of us have ever known.

“I remember growing up complaining to my parents,” says Dave, “They’d be like: ‘You have no idea how lucky you are to be in this time – you’ve never seen utter hardship’. You’ve got to be aware when you’re releasing music that all over the place, people are struggling.”

Many of the new record’s themes seem eerily prescient when related to the turbulent world it’s entering. From the pandemic to politics, there’s a lot going on behind some of the tracks’ mixture of art-house indie eclecticism, aimed at shifting perspectives beyond our current reality. The video to the new song Free from Gravity depicts someone so alienated by the world, that they’re actually from another planet. However timely the tuneful dystopia, the sense that volatility has always raged outside our Western bubble here in the UK isn’t lost on them.

“Lockdown puts everything in perspective but there’s horrible shit going on all the time,” says Dave. “The pandemic has just encroached on our sense of entitlement more. Still, you’ve got to put music out regardless of the circumstances. You hope that people appreciate it and it somehow enriches their lives during uncertain times.”

Django Django are an intriguing and successful musical proposition. They’re art-rockers with a love for panel-beating techno and house rhythms, with members split between London and Scotland. From their self-titled debut to 2018’s more assured Marble Skies and newest opus, they’ve become an even more engaging force over their four albums, with sharper songwriting, deft musical touches and a love for the leftfield.

“We had no gear, just a computer and a guitar,” recalls Dave. “I’d been making songs on a sampler and a four-track. I loved producers like the Dust Brothers, DJ Premier, weird dancehall artists, and the likes of Joe Meek. It was a wild mixture and one we used to help us navigate making that first album with little resources.”

The ear-catching psychedelia of their debut propelled the Djangos firmly into the limelight, top of festival bills and a Mercury Prize nomination with singles such as Default and Waveforms bagging them a sizeable and loyal fanbase. It’s meant their music-making and production process has ebbed and flowed between residential studios to the more DIY-ethos that steers Glowing in the Dark.

“We invested lots of time and money into the second album Born Under Saturn, recording it at this residential studio but I guess we kind of lost a bit of control,” remembers Tommy.

“There was a steep learning curve in terms of the DAW we were using, moving from Cubase to Pro Tools. Plus there was a producer between us recording and how it was made,” he continues.

“I like that album, but we’ve since tried to regain more control. With this new record, we recorded it at our own base, so we’ve swung from very lo-fi to all bells-and-whistles to somewhere between.”

Glowing in the Dark

The band made much of Glowing in the Dark in their North London HQ despite members being geographically scattered. All four would busy themselves at home before collecting ideas and sketches, then bringing them to the group to share.

“Tommy was living in Glasgow already, Jim had moved to Margate, so they’d be coming into London and working on bits. We’d make stuff separately then be really on it when together.”

“It meant we were more focused when we were in the same place, spending time working out how to develop the songs,” adds Tommy on the creative process.

“In the past, we’ve adopted a more cut-and-paste approach. But having a dedicated space where we can have equipment ready to use made a massive difference. Everything is synced up, and there’s a patch bay so you can just go in and work. If you have to set gear up all the time, it means your idea can lose impetus and the spell breaks.”

Many of the record’s themes were inspired by the stress and strain of contemporary urban life with the industrial space around their London studio shaping their world vision.

“Even before the pandemic, the world felt like it was a bit nutty and full-on with the growing pains of globalisation becoming apparent,” says Dave.

“It ramped up during the time we’ve been making the record. It’s our reaction to the world around us, as living in a city often feels a bit like being in a pressure cooker. Much of the record is about this daydream of escape. But we’ve always been into escapist artforms – comics and sci-fi films. For me, music has always allowed me to travel somewhere within it.”

The various members of Django Django all have their own unique relationships with musical equipment and technology. Dave admits to having a low boredom threshold, whereas Tommy will be more likely to be found poring through instruction manuals.

“I like to research something to death and be really choosy. Dave will be on eBay picking up some Russian junk,” laughs Tommy.

“But we did make a conscious decision at the start of the album-making process that we wanted to differentiate it from Marble Skies by keeping the instrumentation more ‘real’,” he explains.

“We’d try to use Wurlitzers and Rhodes sounds, but certain synths would still find their way in like the Roland Juno-60 and SH-1000. These are pieces of kit we’ve used a lot and always come back to.”

A move away from analogue to software and plug-ins seems to have been at the heart of the new record, focusing on a different palette of sounds.

“I love the Soundtoys plug-ins,” says Dave. “I wanted to use less of these chugging beefy analogue synths we’ve had on all of our albums, and try having sounds which are a bit more dynamic. Those big synths can take up a lot of bandwidth and space.”

As producer and drummer, Dave is the engine room of the band. There are certain pieces of kit he eulogises about when it comes to music-making and his creative process.

“The Bass Station 2 is a little monophonic synth and is a go-to for me when it comes to sketching out ideas for tracks such as Free From Gravity and Waking Up,” he states.

“I’ve got this Roland Juno-D from the nineties which picked up. I remember it from this gear list used on old jungle and hardcore rave records. It has this really synthetic string sound, and I got really into that.”

At the same time, Dave tries to stop short of falling into an abyss of wires and equipment.

“I remember getting an ARP Odyssey, it was like trying to tame a wild beast,” he says. “Vinnie had an Oberheim DX, and that had similarly endless possibilities. I get really panicked in that situation.”

“You imagine that if Brian Wilson had all these plug-ins and possibilities at his fingertips when he was making Pet Sounds, then he’d get lost in an absolute rabbit hole.”

Both Tommy and Dave are pleased with how the record has turned out. And unsurprisingly so as it confidently pushes their sounds into ever more adventurous territories.

“Hold Fast is my favourite,” says Tommy. “It’s driven by this arpeggio sequence played on the Juno-60 but triggered by an MPC blasting loud noises. It’s a good example of how you can be surprised by your equipment and end up with some great results.”

Unsurprisingly the pair have plenty of advice for anyone looking to enter the studio or start making music. Dave is a firm believer that the DIY route is the best one to travel for aspiring creatives.

“You don’t need to wait for a producer, engineer or label to help you,” he says.

“Be confident that what you’re doing is good enough and remember that people making records don’t know more than you. Maybe they’ve had experience with desks or studios, but their ideas might not be as exciting.”

He also says aspiring producers and songwriters should try and avoid being bound by their (lack of) equipment. Instead, you should look at any limitation as an opportunity.

“Use what you have to hand, you’ll definitely find something, whether it’s putting a drum machine on a phone app through a pedal or hitting a deodorant can,” says Dave. “Use what you have at your disposal and don’t sit around waiting for someone to do it for you.”

For Tommy, giving yourself time in the studio and ensuring the music-making process runs smoothly can help you hit musical highs.

“Always take care to get your mics sorted from the beginning as the first takes are usually always the best. You might do something great, but you may not have captured it,” he says.

“It’s always so easy to overplay, and you lose the spark – just try and take your time and don’t rush anything out. This can be invaluable.”

With no near end to the UK’s lockdown or the return of live music as we know it in its conventional form anytime soon, the usual album cycle of release, then 18 months on the road is broken.

Dave is confident the band will put this to good use – which is excellent news for anyone wanting to hear more.

“We’ve been stuck in this pattern of releasing a new record every three years as touring schedules are so crazy. But without that, there’s no reason to not let the music carry on coming.”

Glowing in the Dark is released on 12th February.