For her solo debut, Tectonic, the artist sought to create a cinematic feel while staying tuned in to club audiences. 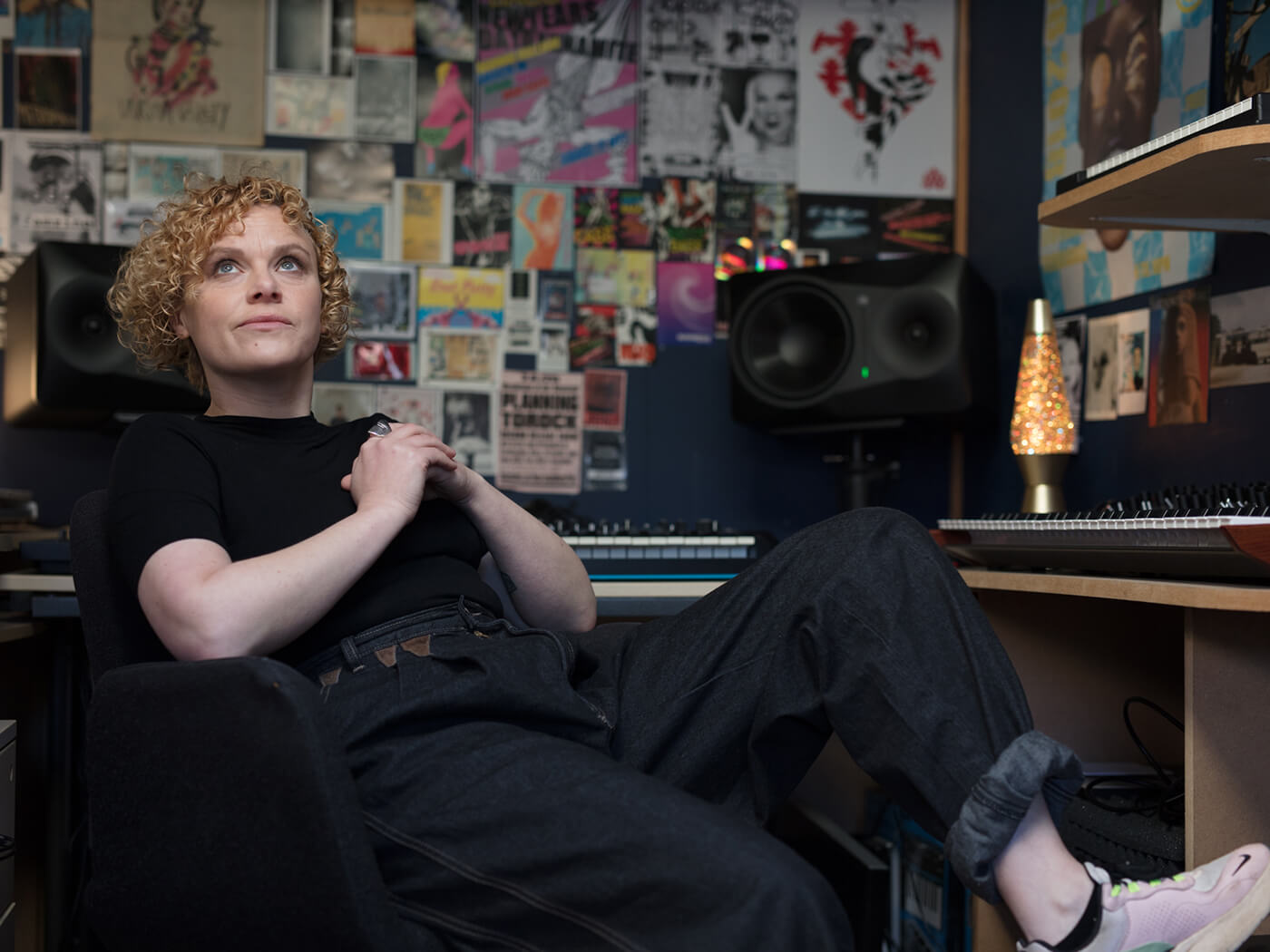 As a mover and shaker in London’s queer club scene, acclaimed screen composer and now solo artist, Hannah Holland’s aural aesthetic is unique, lying somewhere between the thump of the rave and more cinematic soundscapes.

Debut album, Tectonic, recorded in her adopted home of Margate, touches on both these musical worlds, creating something fresh and new through their collision.

“I took the opportunity to delve into all my influences from all the years I’ve been involved in and loving music,” she says on the construction of the new record.

“There are some drum ‘n’ bass-influenced tracks, then more downtempo, Boards of Canada-style songs, alongside plenty of post-punk Kim Deal bass lines. I fed all of these different sounds into the record’s mix.”

It’s certainly an eclectic offering, ranging from the genre-defying club beat of Shutters to the more widescreen, string-embossed Atom Dancer, yet the album’s 12 tracks still hang together as a cohesive body of work.

“I really wanted to play around with the depth and space of the sound of the tracks,” Hannah states. “I tried to go into great detail with the music to come up with this cinematic feel.”

Hannah’s musical foundations were first set in London as a teenager when she picked up a bass guitar and started playing in bands. Hanging around music venues and rehearsal spaces, performing and writing songs led to formative work experience as a runner for music videos.

“I started to learn how to edit music videos, and that was key in helping me translate my ideas into my music,” she explains. 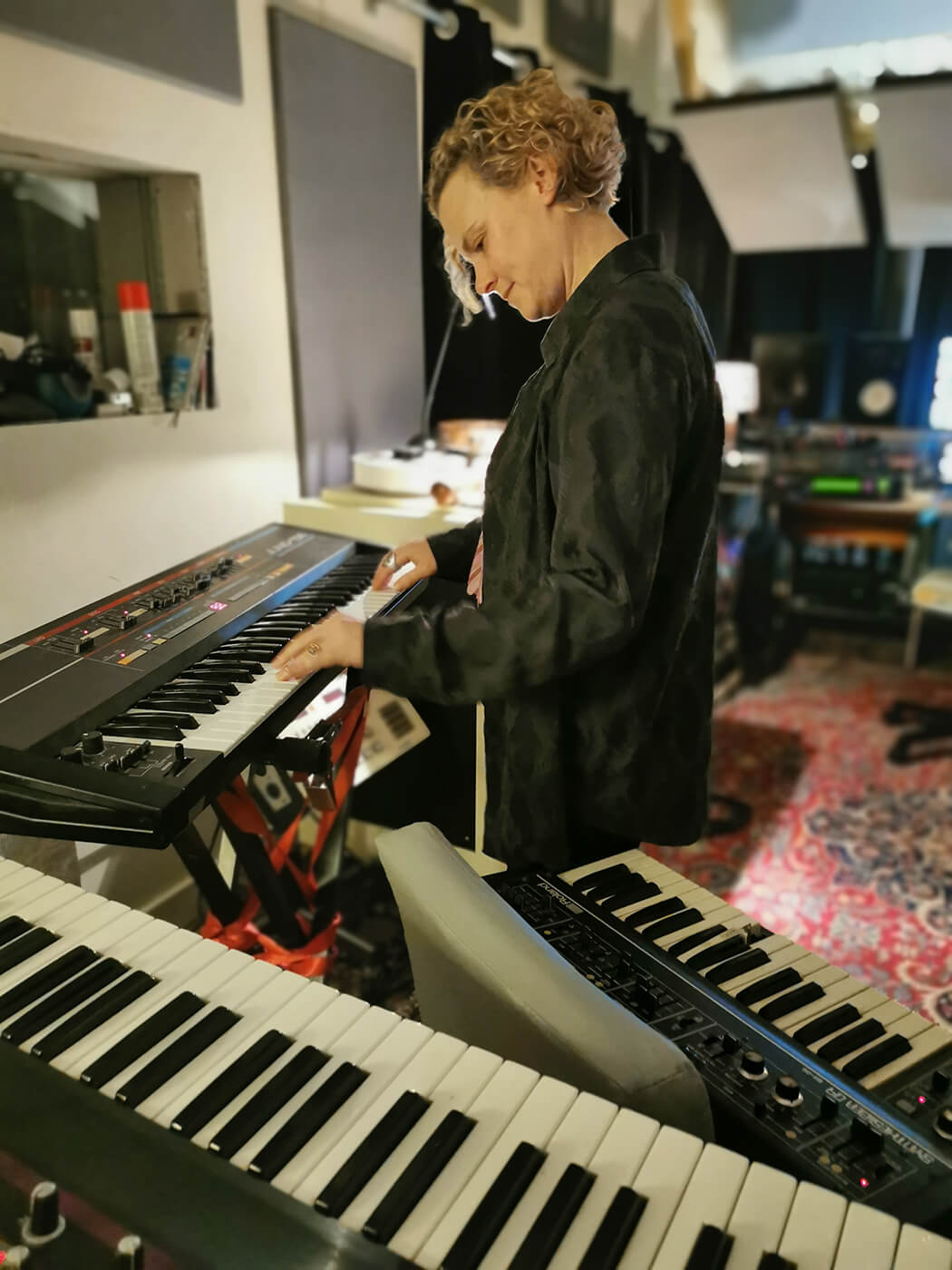 “I found that editing visuals was similar to editing and producing music. I ended up working in that world for five or six years, and it really influenced what I do now.”

Through these creative explorations, Hannah began to turn her hand to DJ’ing, hosting parties in London during the mid-noughties and earning herself a reputation for incendiary sets. Her venture Batty Bass was one of the capital’s most notoriously great nights that spilled into label and remix work, and she continues to be a regular selector at parties and venues ranging from Adonis at Fabric to Panorama Bar in Berlin.

“I began dance music productions as we were desperate to make our own tracks for our club night,” she explains.

“I started to work with vocalists and set up the label to release our productions. Then I started to receive offers of remix work, which was a brilliant way of getting experience, working with the stems of other exciting pieces of music.” 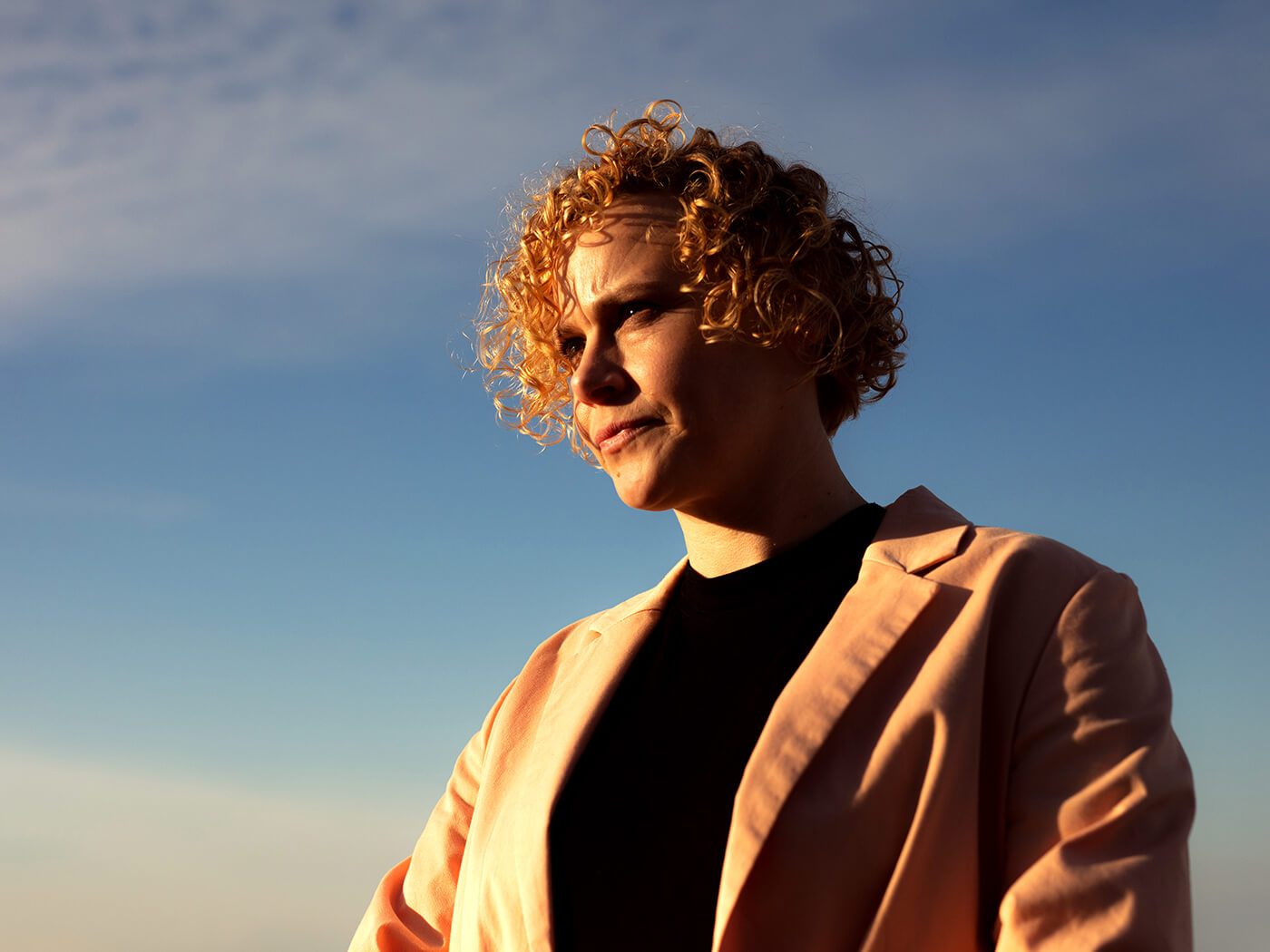 Hannah would create the majority of music in her studio before adding finishing touches with an engineer. Justin Blake, one half of electronic music duo Peace Division, was an influential collaborator who helped Hannah carve out her sound, partly inspired by her time spent in clubs.

“Being a DJ has helped me when it comes to working in the studio,” she states. “I’ve spent so much time honing in on the energy of crowds, and it’s definitely informed how I make music.”

Before this full-length record, Hannah’s musical output was a smorgasbord of releases, remixes, singles and EPs alongside her DJing. But when independent label PRAH Recordings suggested the idea of an album, new music poured out.

“I’ve never had the intention of doing this before because I’ve been so used to making EPs and working on bigger form projects in different areas rather than solo releases,” Hannah says.

“Then I started writing this record in May of last year. I already had plenty of ideas, but once I got really into it, I just came up with this whole new set of music. I think only one track remains from before that fits with the rest.” 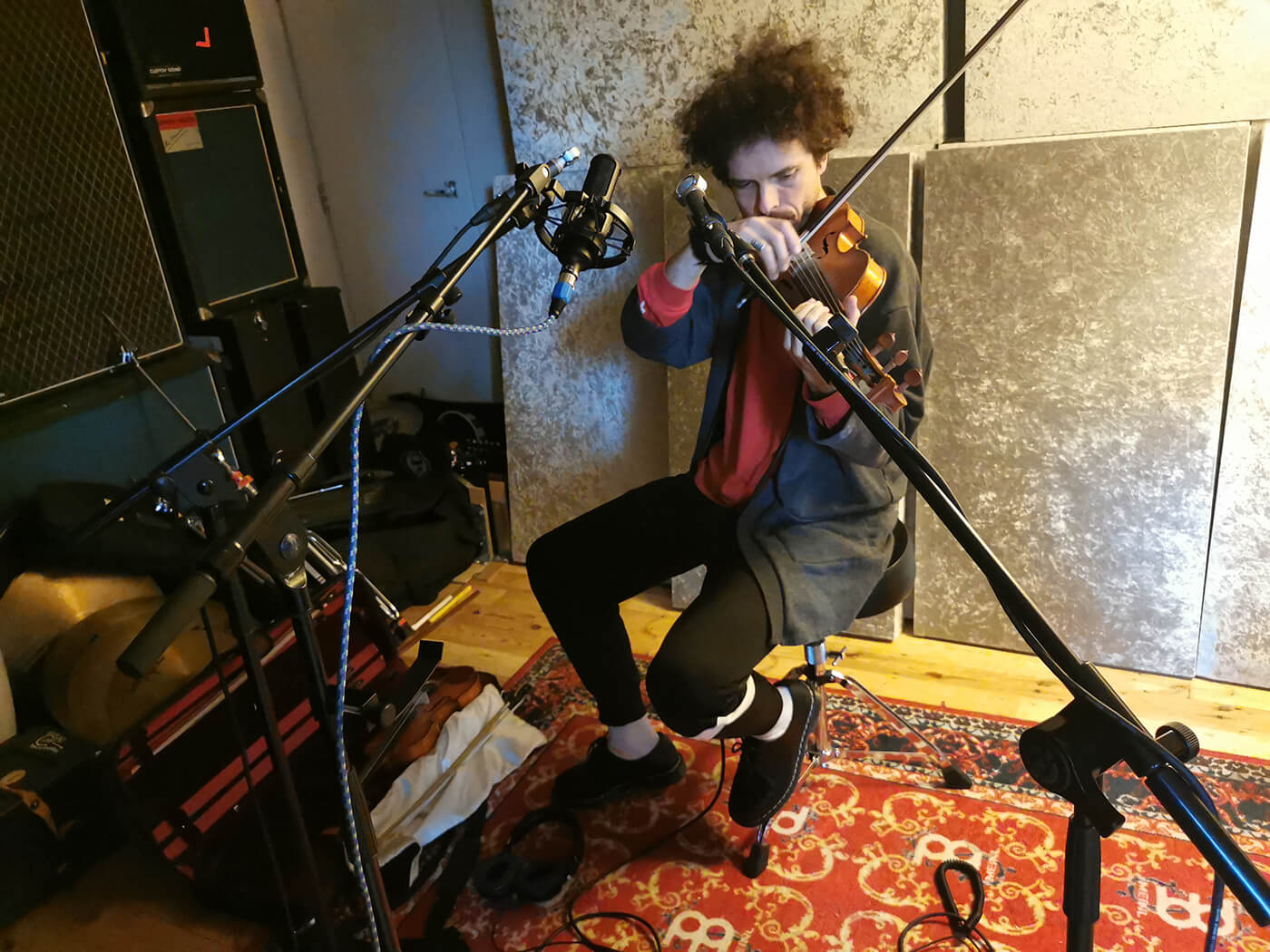 Hannah drew on a huge range of influences for the LP, citing everything from Tindersticks to Kompakt’s Superpitcher via minimal beats and ambient tones as reference points.

“The KLF’s Chill Out inspired me as it has so many weird samples in it,” she says. “I just really love how strange and continuous it is, and although I don’t think my album sounds like it, these kinds of concepts were swirling around my head.”

Hannah made the album in Margate with Al Harle, engineer at Big Jelly Studios and a past collaborator with her band Black Gold Buffalo. Recording at Big Jelly gave her access to an arsenal of music-making machinery.

“Big Jelly Studios have plenty of lovely vintage machines,” states Hannah. “Like this 1970s Copicat tape delay, this really nice Great British Spring reverb from the 80s. The digital delays were done with an old 80s BBD dub echo from Monarch and an original Lexicon PCM60. It all helped us get this wonky, unique sound.”

Hannah’s approach was to take the stems for the tracks, then re-amp and re-record through Big Jelly’s warm-blooded machines to add an extra layer of character to her sound. She was joined in the studio by cellist Francesca Ter-Berg and violin player Raven Bush. 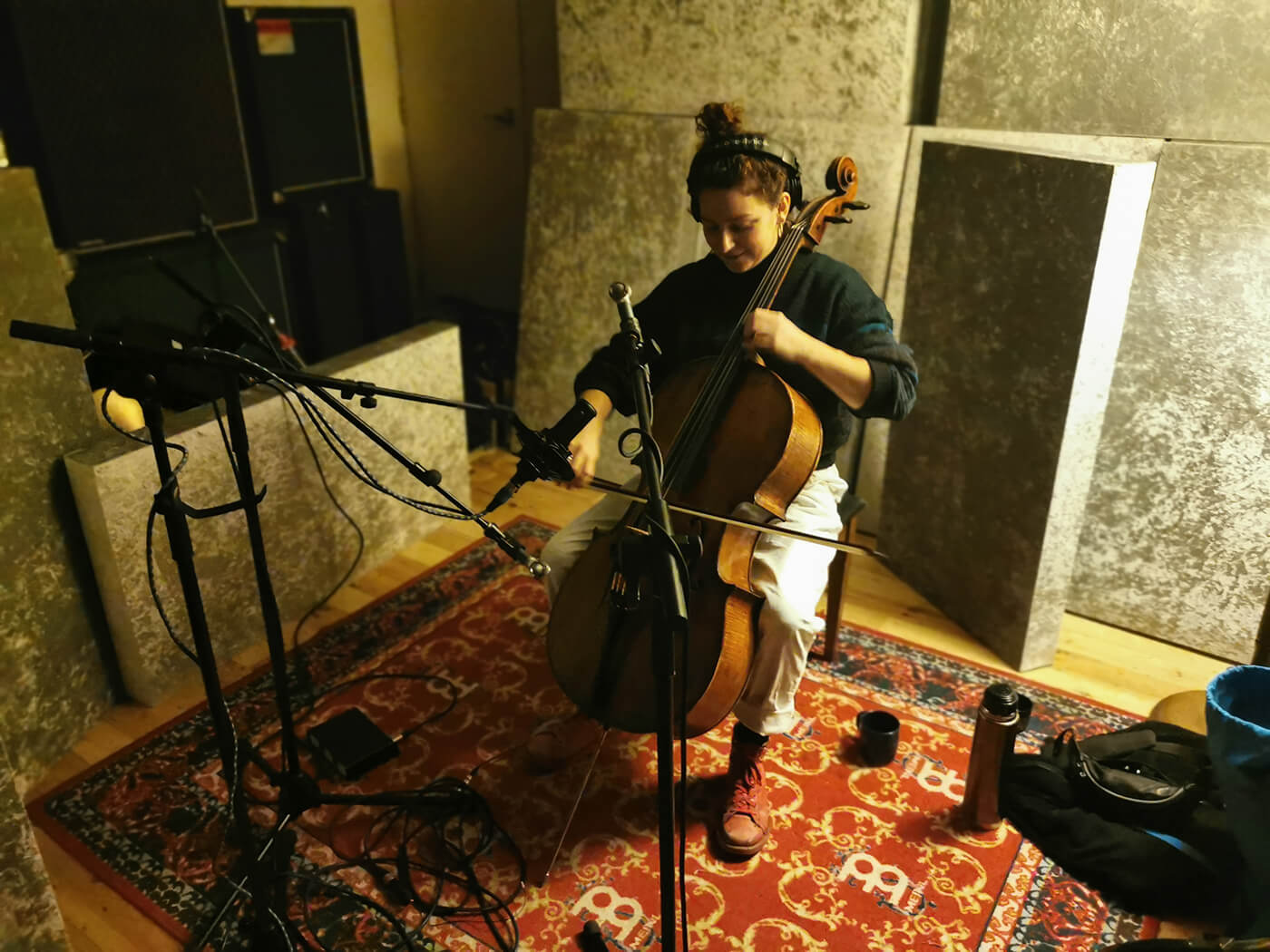 “It was amazing to take advantage of their really nice gear. We re-amped the guitars through their WEM and Simms Watts amps. All other outboard effects for pitch shifting, and harmonising was done with a Sony TCM-5000. That gave the music the depth I was after.”

“I usually start with Guitar Rig as there are some really interesting sound combinations you can come up with,” Hannah says.

“I used this Korg Prologue and a very heavy Yamaha CS6X which my friend happened to be getting rid of when I was working on the record, too. It has these really nice bass sounds which feature throughout.”

While every piece of kit is useful, alongside her writing, Hannah believes much of the personality of Tectonic’s textures is down to Big Jelly and their idiosyncratic collection of gear

“The uniqueness came when I took the stems to Big Jelly. I was able to find the weirdness in the physicality of their old machines and processing sounds through them.”

“I’m not a massive gear freak as I’ve used a minimal setup for so long.”

Hannah’s relationship with gear is very much a functional one, driven as much by the realities of space and money as choice.

“I have a limited palette as I have a limited budget,” she laughs. “I’m not a massive gear freak as I’ve used a minimal setup for so long. I just try and manipulate whatever sound I can get into something I like.”

She cites the move to the seaside town of Margate as an influential one. The Kent town has become a mecca for creatives looking for space in relative proximity to London.

“When I was living in the capital, I was sharing studios all the time. But in Margate, you have the space to spread out and exposure to this great community of artists and music makers. Everyone is interested in collaborating, which makes it a very creative environment to be a part of.” 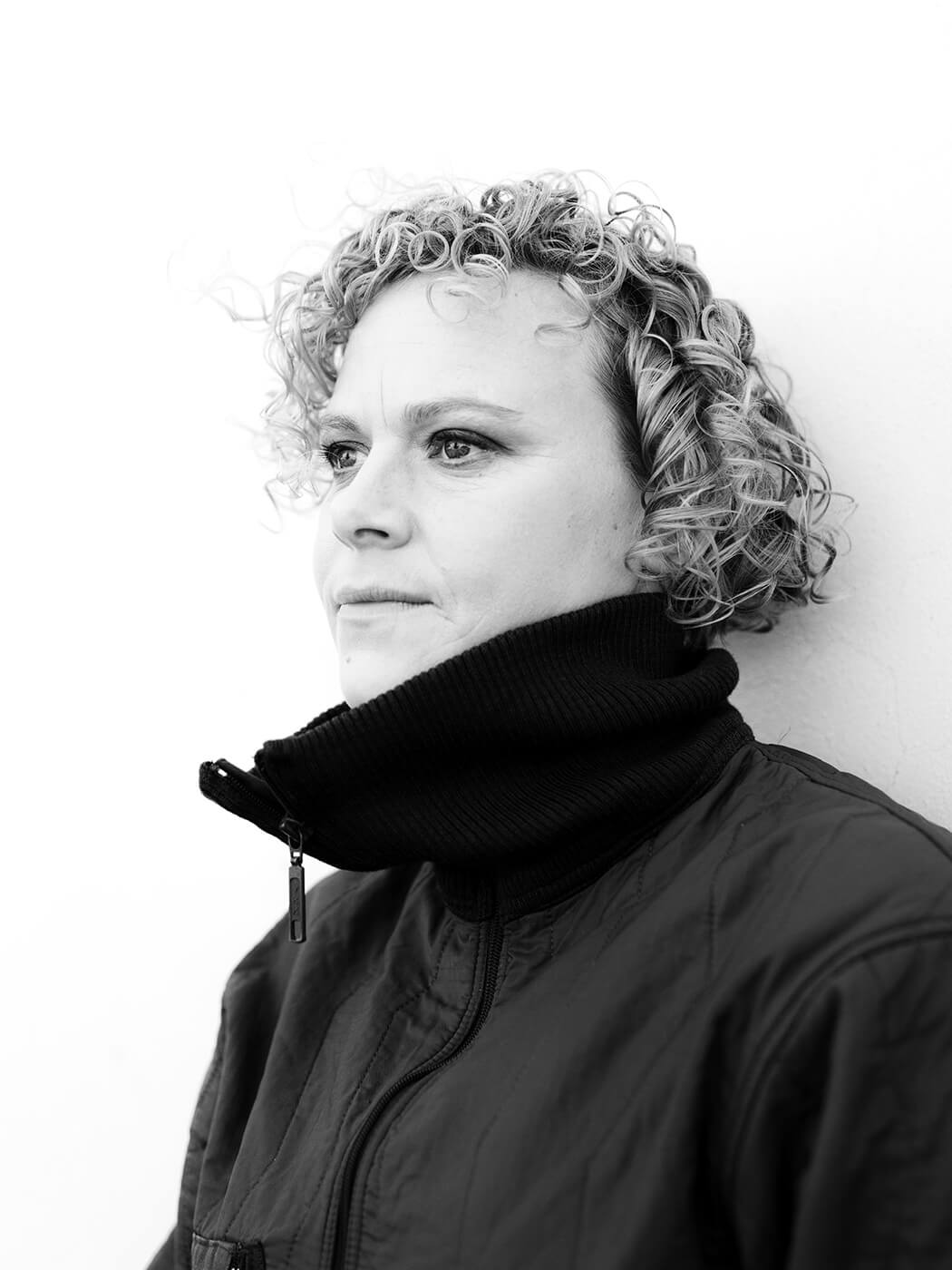 With the Tectonic album due out imminently, Hannah is excited about letting it loose into the wider world and embarking on numerous DJ gigs to celebrate the album’s arrival. She also reflects on her experience in making music, offering advice for anyone looking to follow in her footsteps.

“It’s a long-term game,” she explains, “So you need to be okay with the fact that you won’t create a banger every time you write.”

“Even if you don’t use what you create, every time you write something, you learn something new. Working like this and being open to anything new or different artforms is a really great way of writing and pushing you and your music forwards.”

Tectonic will be released on 17 September via PRAH Recordings.