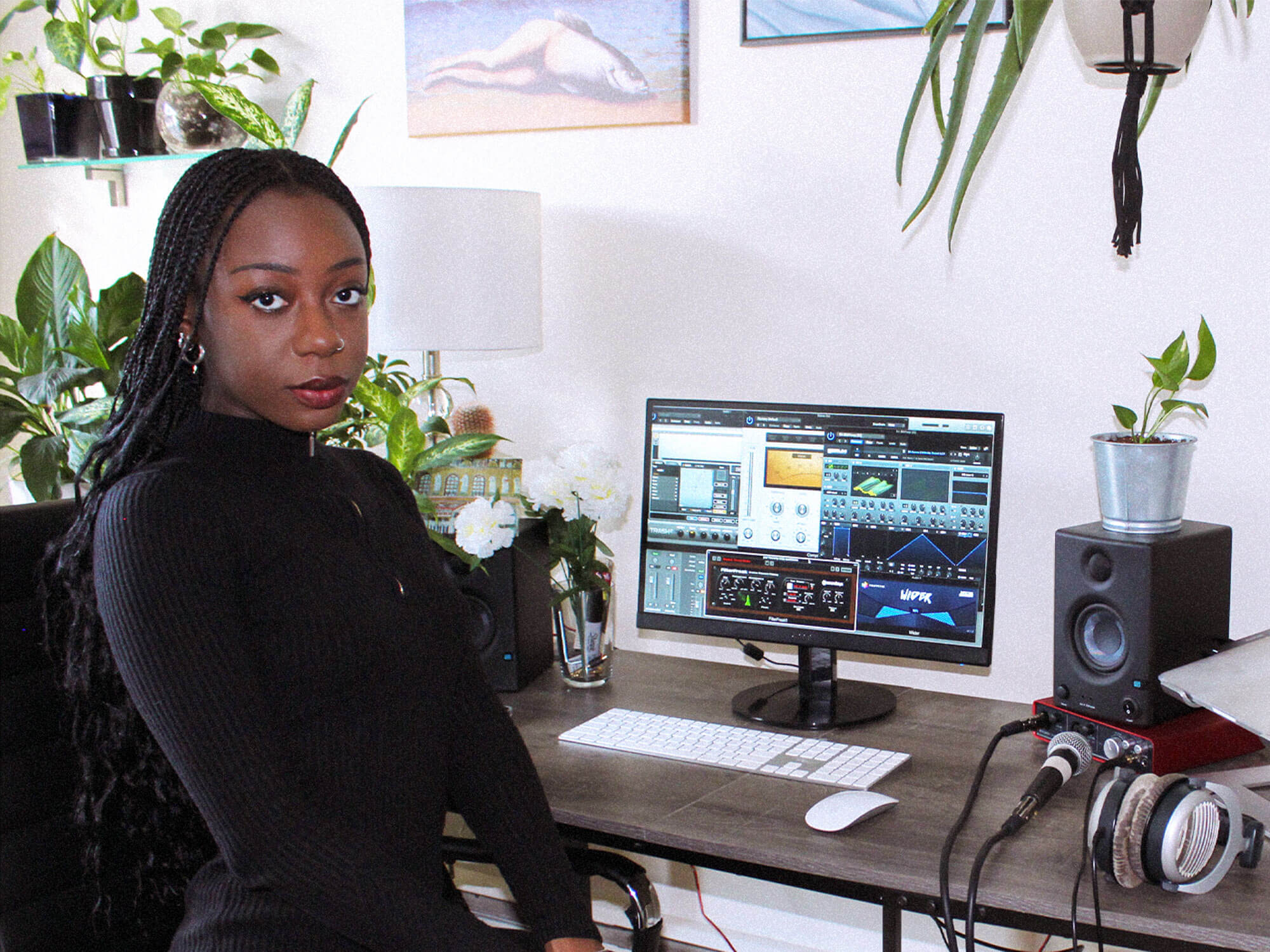 Plug-ins I Actually Use: Debby Friday

“Sometimes, all you need is a decent EQ and a healthy amount of reverb.”

Nigeria-born producer, vocalist and audio-visual artist Debby Friday is making no compromises on her work. After debuting in 2018 with her self-produced rap adjacent EP, BITCHPUNK, she’s been moving at pace to actualise her bold ideas, whether behind the laptop or behind the lens. As a director for her music videos, she’s been nominated for a 2020 Prism Prize, while her abrasive, otherworldly music has received praise from critics.

Based in Vancouver, Friday is close to finishing her debut LP – straight off the back of completing her Master of Fine Arts degree. Her latest project FOCUS – debuted by Adult Swim – gives us a glimpse into how the album might sound, with huge, modulating synth basslines and icy vocal parts. The video aptly centres around the scene of a live avalanche and Friday bolting through a deserted forest. In this outing of Plug-ins I Actually Use, Debby Friday walks us through her minimal setup and explains why simple things such as EQ and compression are often the most vital.

Hi Debby. We love how the music video for FOCUS complements the track’s intensity. How early on are you considering other art forms? Has your Masters given you a specific outlook on your art?

Thank you. When I am making music, I tend to hyper-focus on the feelings that the sounds bring out in me. It’s the same for when I’m writing a script or video treatment or doing any other kind of art-making. I lead with feeling, intuition, and the whole picture makes itself known whenever it is ready to come through me.

As far as my Masters goes, I had never gone to art school before, so I am grateful for the experience because it gave me two years in a safe and semi-private space to fail, explore and develop as an artist. I did a lot of stuff I otherwise wouldn’t have, such as my thesis project LINK SICK, which is probably my favourite thing I made this year. It was good to be in that environment and make weird art without worrying about it too much.

It seems like you have a pretty minimal setup, gear-wise. How has software enabled you to actualise your ideas?

My setup is extremely minimal because I like the ability to travel as light as possible and still do what I want, wherever and whenever. Hardware is cool, but you don’t need a lot of toys to make good music. I make all my demos on my laptop, mix in my headphones and test them out on whatever speakers I have lying around. Later on, when I want to clean up and finish a track, I’ll head into a proper studio.

I love learning how to use different DAWs, teaching myself alternative ways of organising sound, like live-coding or playing with neural networks. It helps me expand my understanding of music and sound, and I think it lends a unique quality to my workflow.

The last plug-in I bought is Xfer’s Serum. I bought it for one specific track that will be on my upcoming album. I had this melody in my head, and I knew what I wanted it to sound like: an electronic organ that’s scared and being chased down a dark alley. So I did some research and decided to just buy Serum and figure it out along the way. Surprisingly, I got the sound I was looking for pretty quickly. I’ve used it here and there since I’ve been working on the rest of my album. I am still learning. It’s great. And definitely worth it. 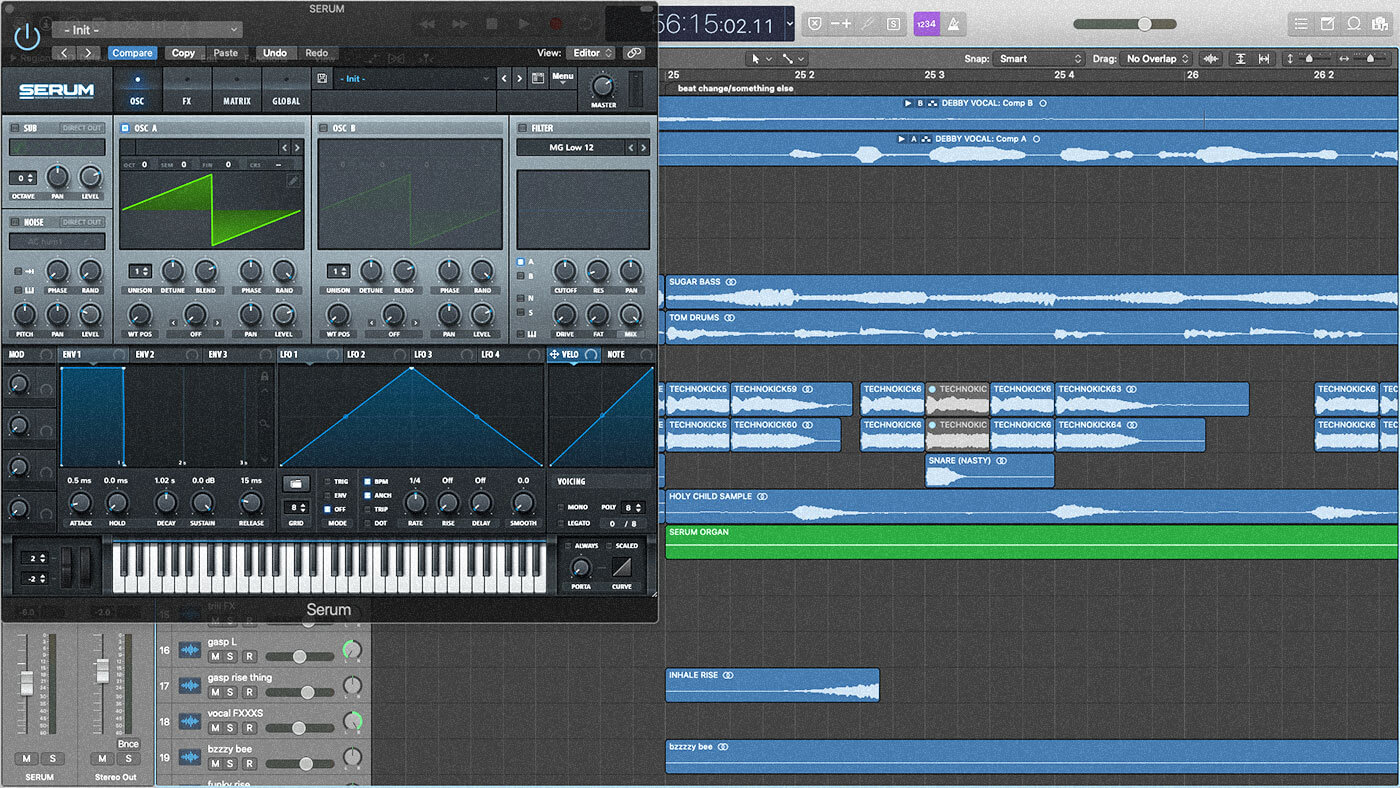 Polyverse’s Wider plug-in, which I use for ad-libs or backing vocals.

iZotope’s Trash 2. I love distortion – mangling, crunching things up – and this plug-in does that in sonically satisfying ways. If I want to add a sinister edge to a kick or turn a sample into a unique hi-hat, this is the plug-in to do just that. A favourite of mine, for sure. 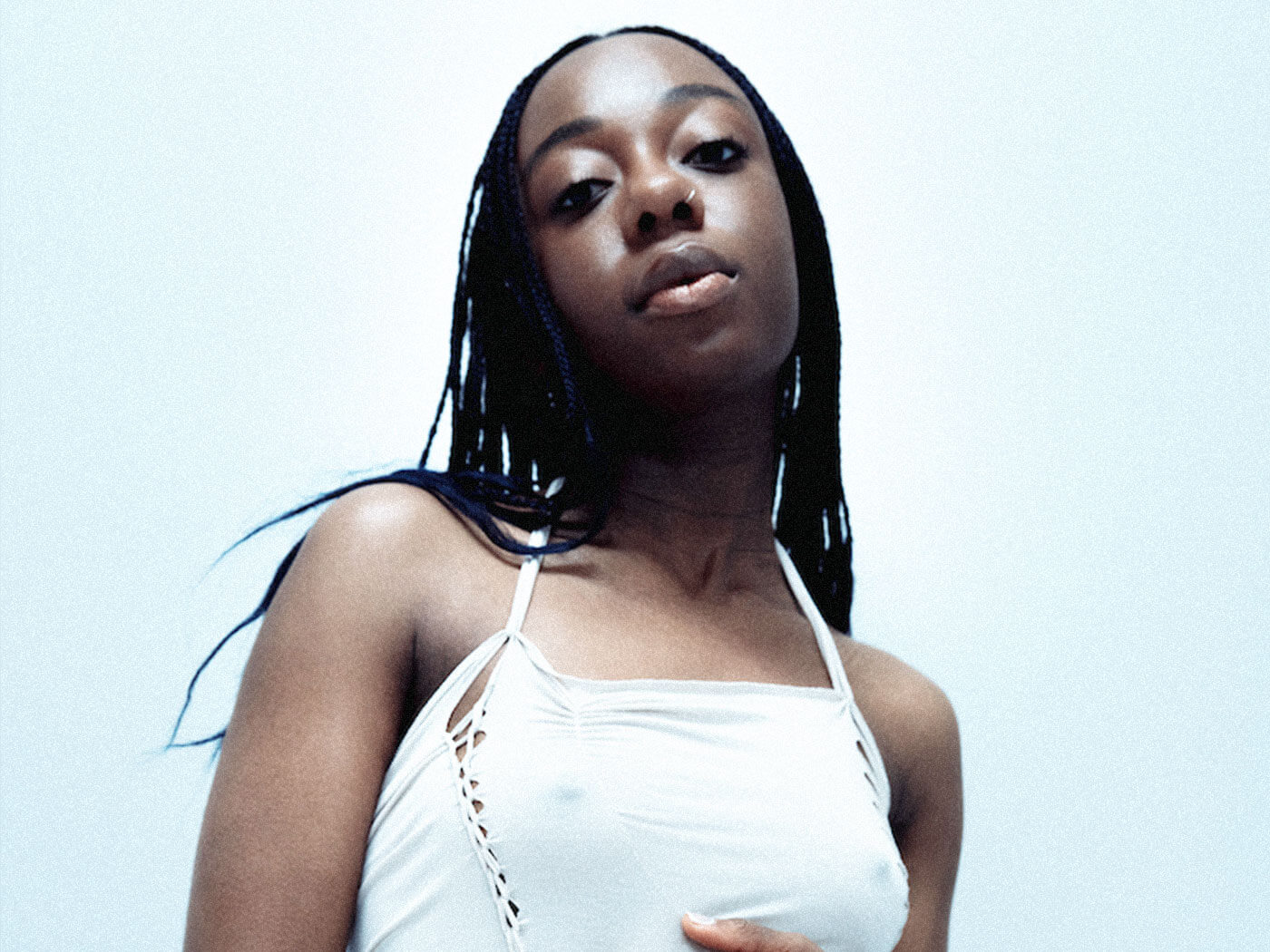 What plug-ins are vital for your vocal chain?

Compression, EQ and reverb, always. The other stuff is case by case. For vocals, I believe that less is best unless you’re trying to achieve a very affected way of singing and rapping. Sometimes, all you need is a decent EQ and a healthy amount of reverb. My current favourite is the Valhalla Vintage Verb.

Probably the Soundtoys 5 bundle. It was worth it because I use quite a few of those plug-ins regularly, and even the ones I don’t are still useful for the one-off track or two.

The stock Stereo Delay plug-in that comes with Logic Pro. You can hear the Dual ½ Note Feedback preset all over DEATH DRIVE and the literal Factory Default Delay all over BITCHPUNK. I throw that plug-in on anything, and it works like a charm. I like it best because it’s straightforward and fast. The presets are very useful if you want to get an idea down right away.

Which plug-in would FOCUS not be complete without?

Trash 2, for obvious reasons. And the multiple compressors. It’s such a noisy, intense, boisterous track, and when you’re dealing with loudness or entropy thematically, things can get messy. I wanted the track to communicate clearly and for certain sonic elements to move in and out very sharp and neatly. I needed balance for that.

Channel EQ. It is absolutely astounding how many times a simple EQ can save an idea.

The Logic Pedalboard, specifically Double Dragon. That was the first plug-in I learned how to use, and I put it all over my vocals in my early work. I’m trying not to use it as much these days, but I have an emotional attachment to it. 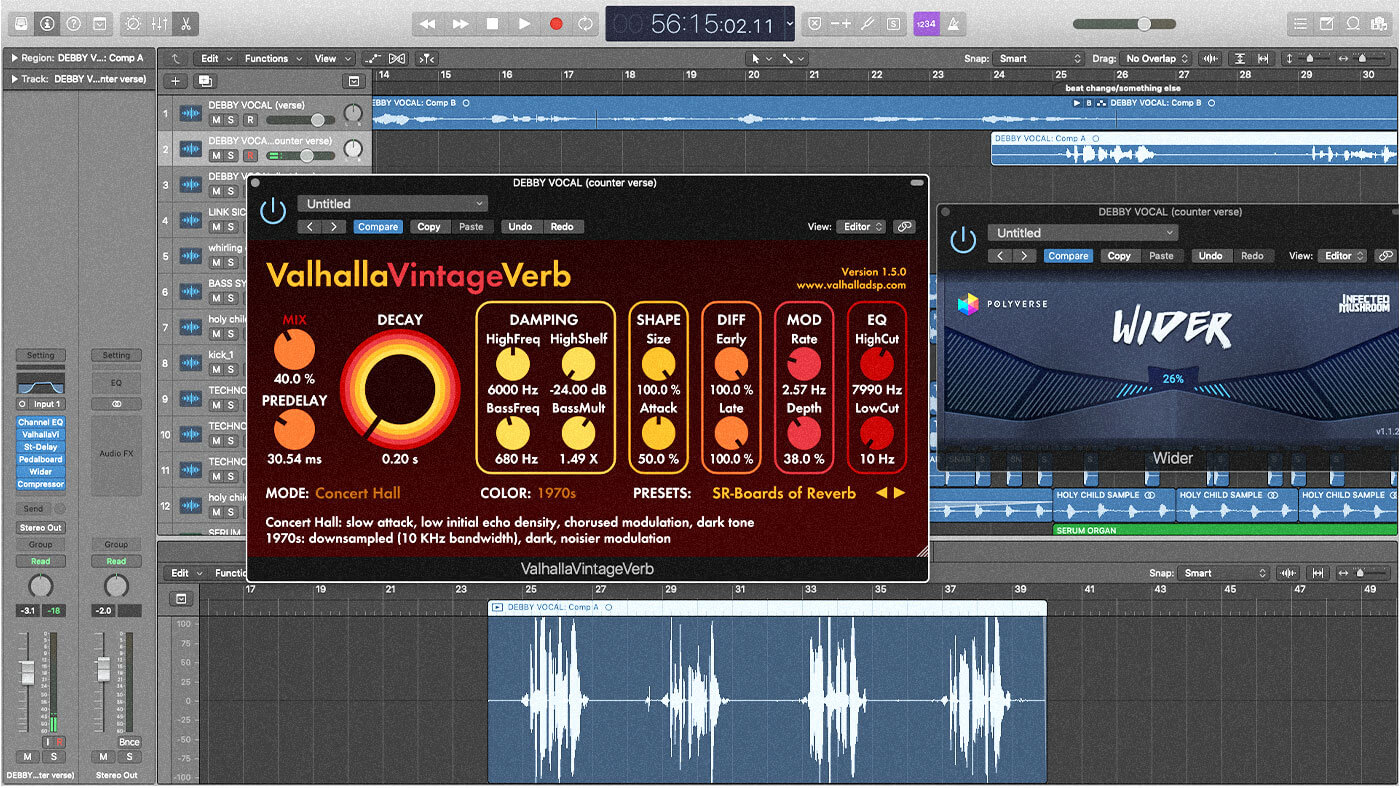 You recently teamed up with BIG KILL on Fat Lip. How do you generally approach collaboration, and does collaboration play an important role in your work?

I started off making music alone in a basement, and I feel like I’ve only just begun to open up to collaborating with other people. I’ve realised that it’s important for me to have a clear vision of what I want when I am collaborating with other people. You know how it goes when artists get together – we’re walking between two worlds, and sometimes we’re more in the other one than in this one.

I like messing around and seeing what happens, but I am learning that I need a defined goal in mind to ground myself. It can be as simple as “finish the arrangement for this song” or “storyboard the first half of this video”. I am a goal-oriented person. It’s just the way my brain works. I like the feeling of accomplishment that comes with achieving something I’ve envisioned and bringing the ephemeral into the material. It’s even better when you can do that with other people and still have a good time.

What’s the music scene like in Vancouver at the moment, and what local artists are inspiring you?

Vancouver literally just started opening up with small shows again this month, but they’ve been going back and forth with the guidelines.  I’ve been playing shows again so I’m travelling a lot and I am really focused on finishing my album. Truthfully, I’m kind of in a weird limbo space with the city. I feel checked out. I’m definitely inspired by all the people I’ve worked with who I admire and respect. There’s a wealth of talent here and across Canada in general.

We’re very much looking forward to your LP. Can you share any details at this time?

Well, I can tell you that I have a title and, at this moment, the album is 80 to 90 per cent done. I think I’ll finish it by the beginning of next year. I pushed myself a lot for this one and it sounds so different than anything I have put out so far yet at the same time, it feels like it is the most ME body of work I have ever made. I am having a lot of fun becoming more of myself. And oh yeah, there is a film.