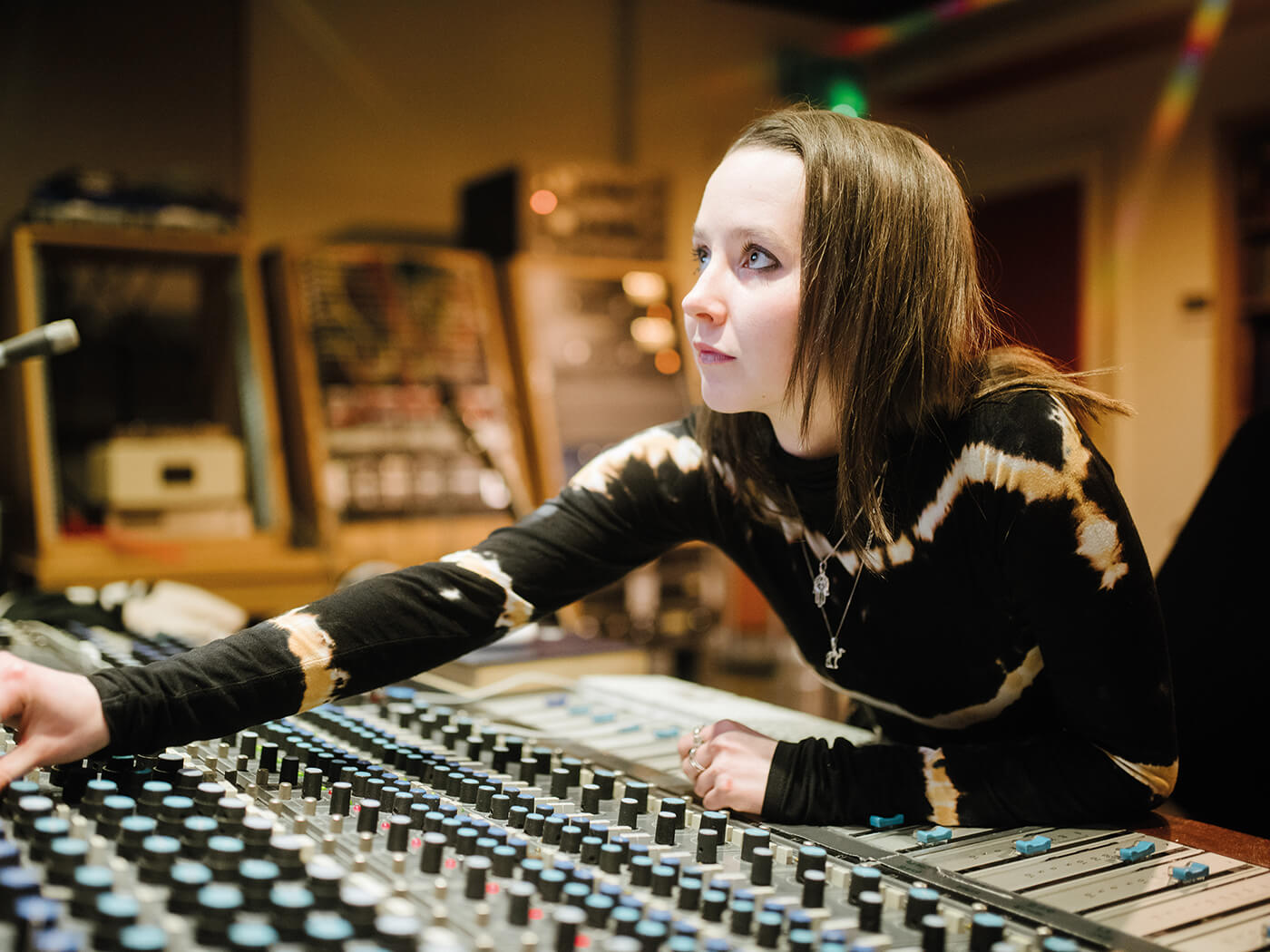 Dani takes her time before sessions begin, speaking to the artists and producers and getting a comprehensive understanding of the type of sound required

Dani Bennett Spragg’s approach to a typical session can vary, with required set-up time changing based on the artist she’s working with. However, there are some rules that always apply.

“Because I work in house at Hoxa HQ [in London’s West Hampstead], a lot of my sessions are with people that I’ve never met before. I’ll always have a conversation with the artist or producer before the session starts, to get an idea of the sound we’re going for,” Dani explains. “I’ll also ask if there’s a reference point, if possible. Actually, really often, people just want to come into the studio and see what happens and sort of write. I’ve done loads of sessions where I’ve set up everything I possibly can, so the artist can just jump from instrument to instrument.

“If I’m recording an album or a song, then I’ll speak to the producer and get my head around the sound they’re going for. I basically try and do as much prep as possible. I really hate getting to the studio and having to wait for somebody else to arrive before I can start setting up,” Dani continues. “Once the band or artist are in the studio, they don’t want to see you plugging stuff in – they want to be having a cup of tea with you and talking about the music that we’re going to record. So if I don’t have all the info I need before the session, it’s quite manic! Prep is so important.”

When it comes to the actual recording gear on hand for sessions at Hoxa, Dani has some really nice options. “Jimmy, who owns Hoxa, is quite selective about the gear that he buys. We don’t have mountains of gear, but everything we do have is like the best of the best. He’s got an EMT 140 stereo reverb plate and a vast range of Neumann microphones, including a U 47, a pair of U 67s and a pair of M 149s. The pair of U 67s we’ve got are the most perfectly matched and they’re really great to use. I’m a bit spoilt for choice.”

However, Dani likes stepping outside of the box on occasion. “I personally really like using weird stuff, I often go over to the [Gardiner Houlgate] guitar auctions in Corsham, Wiltshire. Amongst the guitars, there’s always some unusual microphones that nobody really knows much about, so they’re not that expensive. They’re sometimes really strange. I like using those kinds of mics for things like crushing drums or drum ambience, or just recording sounds in a weird way.”

Hoxa itself provides plenty of unique possibilities. “In the live room at Hoxa, we basically have a drum cupboard where the plate lives and that’s where the doors come across that shut the whole studio. In the control room, we’ve got the grand piano next to the desk. If you keep the lid up on the grand piano and put mics in there while you’re doing drums, you get this really weird sort of piano string reverb. It’s quite unique that we can do that at Hoxa, as it’s pretty unusual to have a grand piano in the control room.

“In terms of pres and outboard, in all honesty, I mainly just use the desk. We have a couple of outboard pres – we’ve got a really nice Telefunken V76s – but basically, the desk is my favourite thing. It’s actually just a beautiful desk. It’s a Neve 8058 MK II.”

Dani always prefers capturing the sound in a state that’s as ‘final’ as possible, as opposed to adopting a ‘let’s fix it in the mix’ attitude. “I want to commit to the sound on the way in,” she explains. “We try and get it as close to what we want it to sound like as early in the process as we can. One of my favourite things to do – and it’s pretty rare that you can do this, to be honest – is to have all the members of the band (if you’re working with a band) in one room. Have all the doors open and have lots of bleed. Then it makes your job so easy. If you can do that, and it sounds great, then your whole job is just to balance it.”

Dani believes that putting the effort into that initial recording yields a better final record. “I’ve worked with some people who will kind of put down a temp version of the recording, like they don’t really care how it sounds initially, because of course they think, ‘Ah well, I can change it later’. It does happen a lot. And it’s true that you can do anything to it afterwards. You can pitch it or you can put it on a grid or change the tempo, anything, basically – but you do lose that true, genuine performance aspect.

“I don’t find that approach very fun, really, I feel like it takes the life out of it. Room sound is also a vital component of the process. The room at Hoxa is really lovely for a lot of things, but it’s not super versatile. The ceilings aren’t that high and sometimes, you just have to go, ‘Actually, this isn’t the right room for this.’ I think some people overlook the actual sound of the room. Another element of that is that sometimes, people just go into the studio and put the instruments up without getting an idea of where the best place to situate them is. I think that’s a pretty important part of it.”

Dani is a keen listener to a diverse array of music and is avidly interested in newly released records, this makes the process of getting a certain sound from a reference point that bit quicker. “There’s quite a lot of recent stuff I’ve heard that has blown me away,” Dani tells us. “Pretty much anything that Tchad Blake mixes, I love. I don’t know how he gets it to sound so good. The recent Black Keys record Let’s Rock sounds incredible. Another new one that I really love the sound of is Sharon Van Etten’s last record, Remind Me Tomorrow, which John Congleton produced and mixed. I think he’s amazing.”

Dani also invests time in listening to older recordings, too. “I think it’s interesting when you hear stuff that you know was recorded really quickly with three or four mics on the drums,” Dani says. “For some reason, it has this really charming sound. It’s so hard to replicate that. I think it’s a combination of the technology being so different, but also the process mentally being focused on capturing live performance as opposed to the ‘fix it in the mix’ philosophy. The restrictions of just using tape forced people to focus on their performances. Even a record like The Beatles’ first album Please Please Me was recorded in one day. It’s so hard to capture that same kind of charm on a record today.”

We ask Dani what genres or musical styles she prefers working with. “I love working with bands, just classic rock ’n’ roll bands,” she says. “I also really like working with singer-songwriters. Acoustic, folky stuff I just find really fun, because often there aren’t very many instruments in the tracks, so it forces you to really nail the sounds.

“I was working with an artist called Blair Dunlop last year and he had Ed Harcourt producing. Blair is quite a classic folk musician, but with Ed’s creative input, Blair was excited about making it sound different and having weird little parts coming in and out. He was pretty much up for trying anything, so we had a lot of fun making that record.”

Read our full interview with Dani here. For more of Dani, make sure to check out her website.