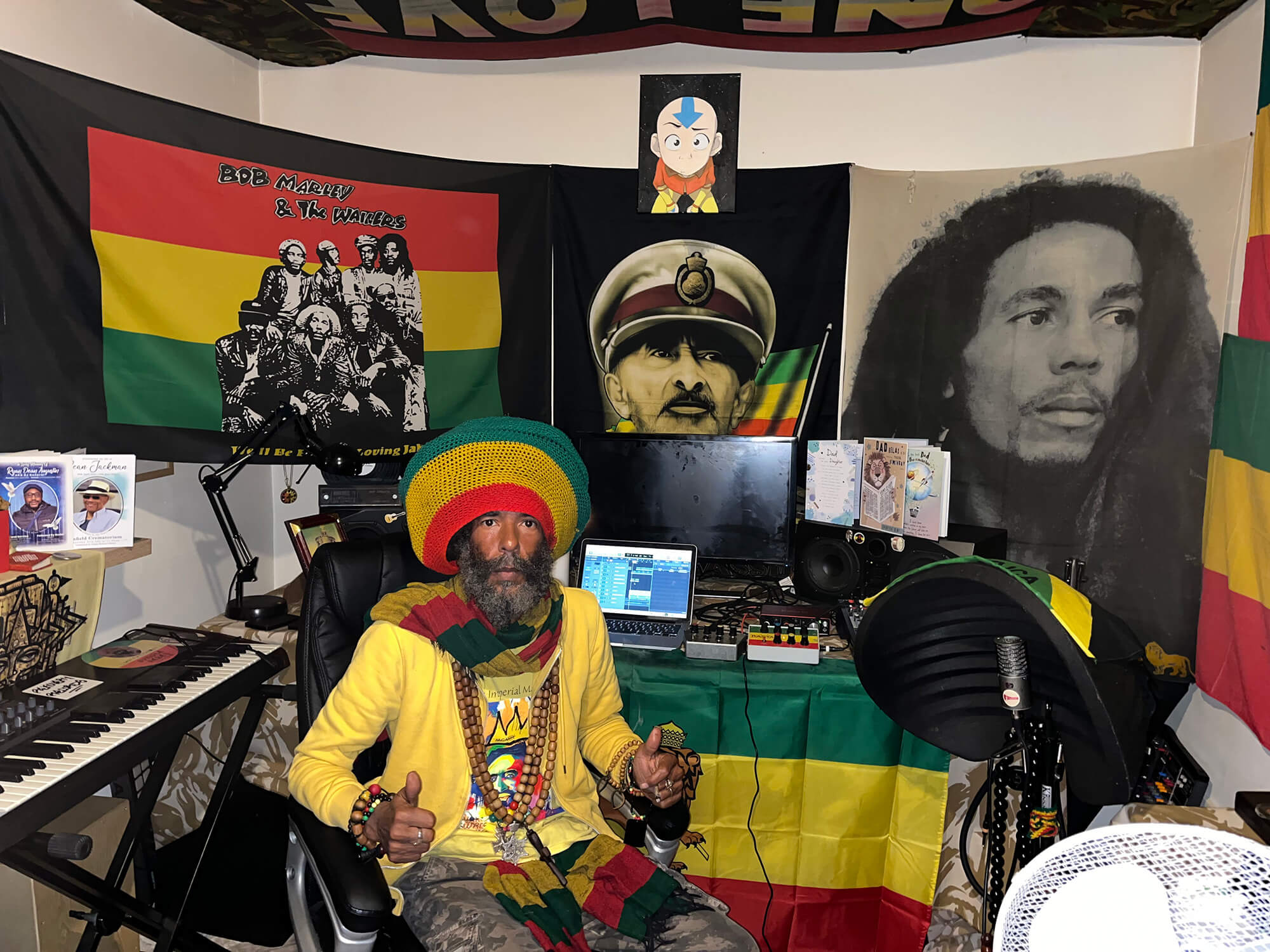 Congo Natty on jungle music: “There are ingredients in London that are nowhere else in the world.”

The pioneer of jungle talks new album Ancestorz, his roots, one take recording, collaborating, and sampling.

If ever there was an artist fit for creating an album that’s a respectful, expertly-constructed ode to jungle music, then it’s the pioneer of the genre, Congo Natty. His first album in nine years, Ancestorz (Rootz of Jungle), is a humongous 32-tracker that explores all facets and influences of jungle. It features an array of collaborators, from Maverick Sabre to Akala, Footsie, Eva Lazarus and many, many more.

Speaking from his studio, which he shares with his drill producer son Yoz Beatz, Congo Natty tells us about the past, present and future of jungle music. He discusses the link between jungle, jazz and other genres, which of his organic instruments he loves to play, one-take recording, sampling and the importance of sharing a music production process with others.

What does jungle music mean to you? And do you feel proud to have been a pioneer of this music for so long?

When we were releasing music in 1992, it was a battle. Now, we give thanks and praise that jungle can actually just do its thing. I don’t have to tell you about jungle now.

It’s definitely embedded in music, isn’t it? When you look at the likes of, say recently, Nia Archives and Sherelle.

Yeah. There was a change in consciousness of us, as the UK. It was the first time that we did things for ourselves. 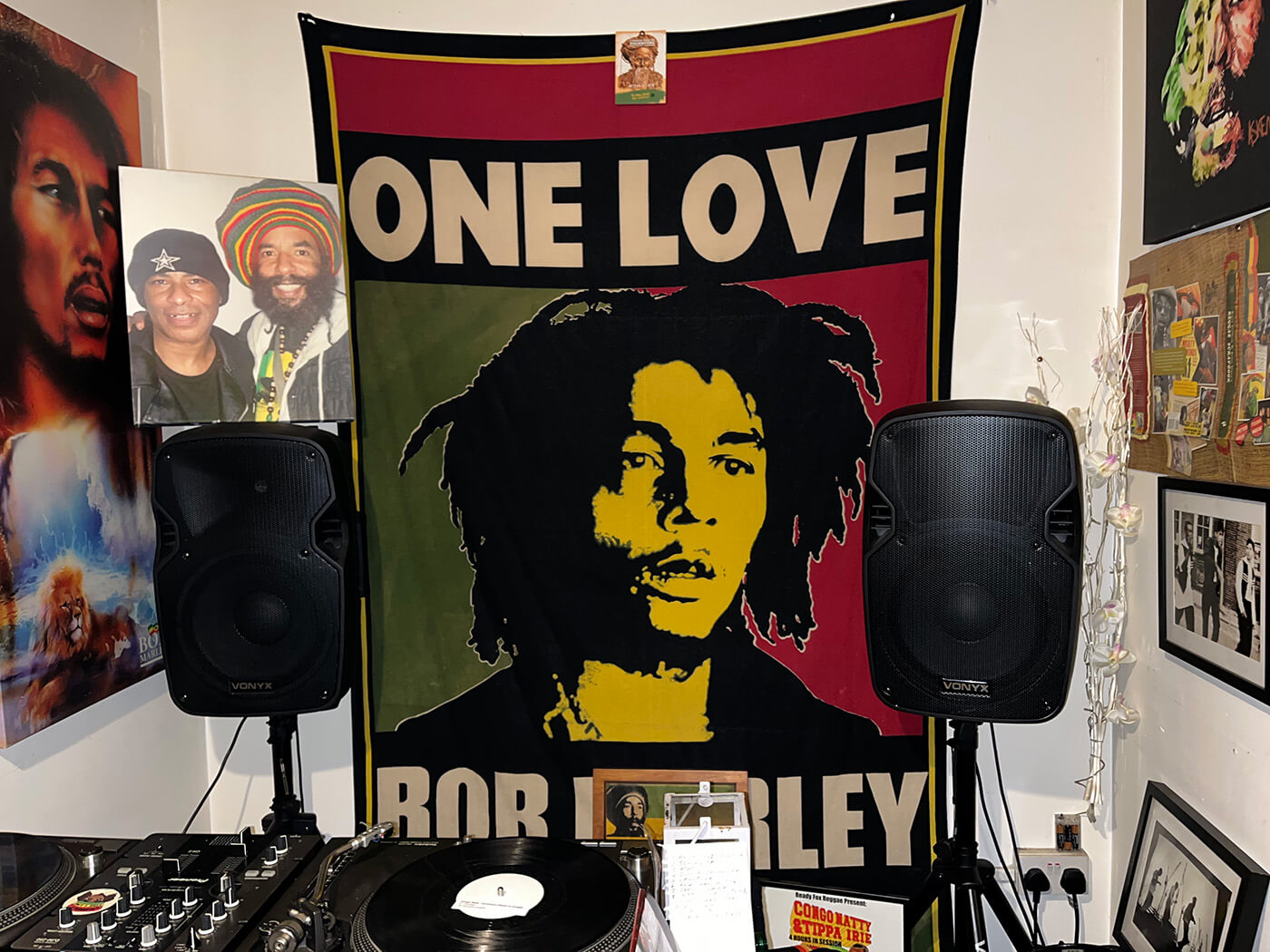 The album is called Ancestorz.

It’s linking with the original youth. You might hear a story that your great grandad and that story touches your heart. You want to know more about him or her. We’ve got musical fathers and mothers, otherwise, we wouldn’t have been born.

Think of grime and UK drill – they are two kinds of music that have come out of the UK, and why? Because there are ingredients in London that are nowhere else in the world. That’s what Ancestorz is about. We’re Londoners surrounded by the concrete jungle – material things, so we’re chopped off from the spiritual path.

Would you say you’re a collaborative musician?

100 per cent. Music has always been a group thing for me. That’s when it’s more powerful. My collaborations are about unifying genres. It’s about coming to a middle ground. There’s a middle ground to everything if we just find it.

Where was the album made?

Firstly, the LP was made in the belly of my mum. She’s a Welsh woman. And that’s where all my music comes – out of her belly. Those are the ingredients for my music: my Welsh mum, my Jamaican dad, and the fact that I was born in Tottenham. It’s something about that trinity that created this vibration. And now, we are the generation that creates music through digital technology.

My studio’s based in Margate and it’s a part of a building with loads of studios and musicians and creative souls. It’s called Fire Eye Land. 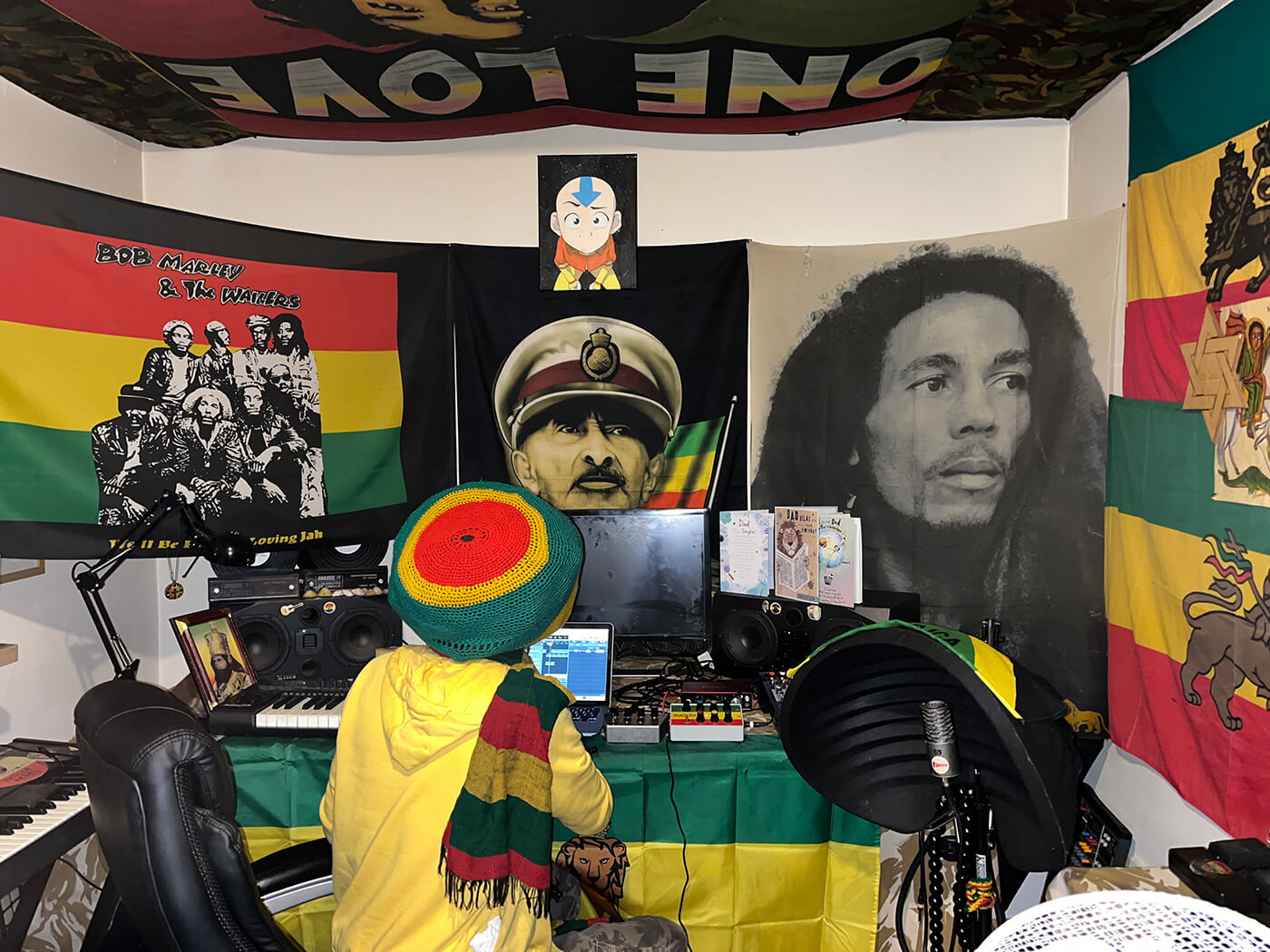 What DAW do you use?

I use Apple Logic Pro. I used to be a Cubase man and then I discovered Logic. Now, I’m at a junction where I’m starting to feel Ableton Live because it’s much better for beat creation than Logic.

Any young listeners out there just remember: if you’re going to use any of these programmes, it’s really down to the plugins you have. 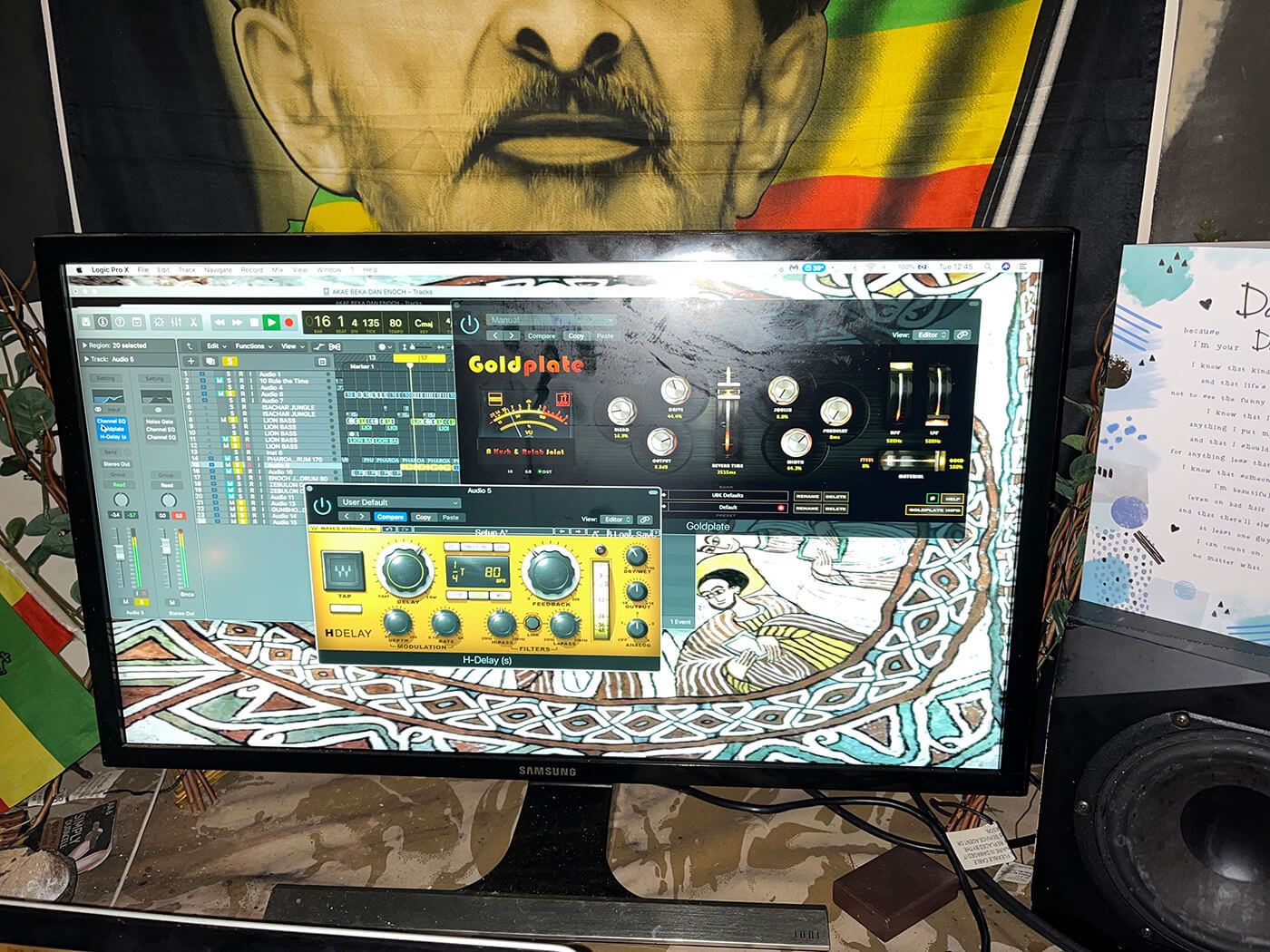 What are your favourite item in your studio?

My favourite bit of gear is the keyboard because that’s when I create the bassline. That’s like putting the engine in the car. You might have a crisp body work but now you’ve got the engine you can really switch it on. And my drums. I’ve got nyabinghi drums so on the Ancestorz LP.

And what can you tell us about how you use instruments and record?

In my studio right now I’m looking at an acoustic bass, a Les Paul rhythm guitar, and my daughter has taken my acoustic Takamine guitar. Because now we’ve got the technology, I can play a little line and then I can edit that line, chop it up, and nice it up. There’s a lot more interjection of instrumentation – plus, I work with soloists.

Another important part of recording is one take. Ancestorz is one take. Everything. No premeditation. All my bars, I didn’t write them down. That was what I was trying to say to the musicians: ‘treat jungle like jazz. With space.’ 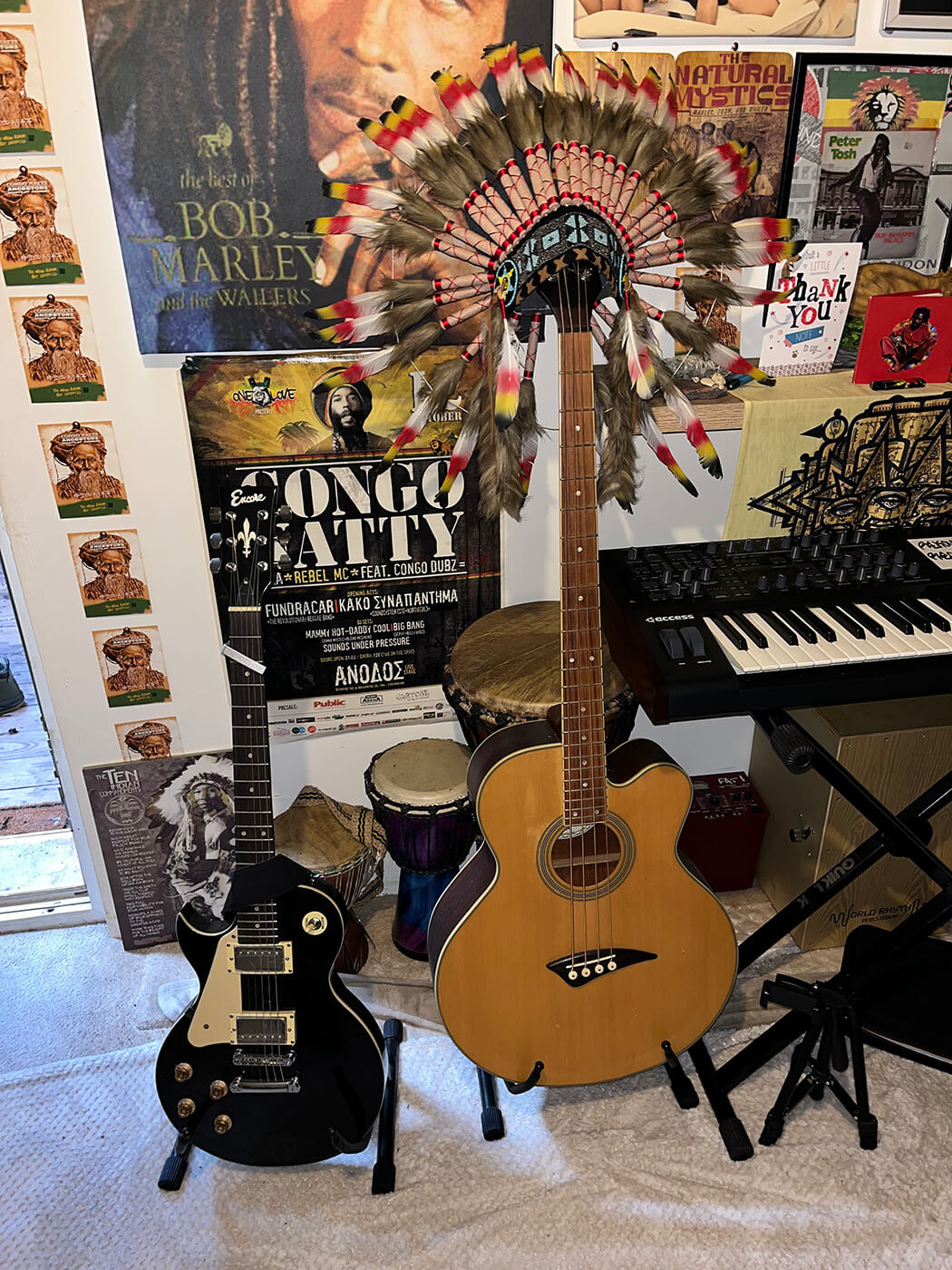 I’ve had two lives as an engineer: say I record with Tenor Fly, his first take I guarantee you will be the best take – that first burst of energy. But because he’s an artist, he’ll always say “I wanna do it again”, and I’m like, “go on, bruv,” because as an engineer you want to support the artist. However, when you start to study the greats of music, it’s all one take. So many classic [artists] – if they stayed in that studio and started going “let’s do it again and let’s try it again”, we wouldn’t be hearing what we’re hearing now.

Tell us more about the connection between jazz and jungle.

Most music is chorus, verse, and bridge. Jungle doesn’t have a chorus. And by the time you get to the end of the track, it could sound like a different track because you’ve been on a journey with the beats. That’s the pureness of jungle music and why it fits with jazz so well.

There are poignant samples laced throughout the album – U Roy – Rule The Nation on the lead track, Ancestorz, for example. What’s your approach to sampling?

Music’s a message and sometimes it’s not our voice that gives the message, it’s a little sample that says everything you need to say.

I’m of the generation that grew up around the whole sampling revolution. So, if you think about us listening to music, we’re listening to people interject with different so-called samples. If you listen to Public Enemy’s music, that was a big inspiration for me. 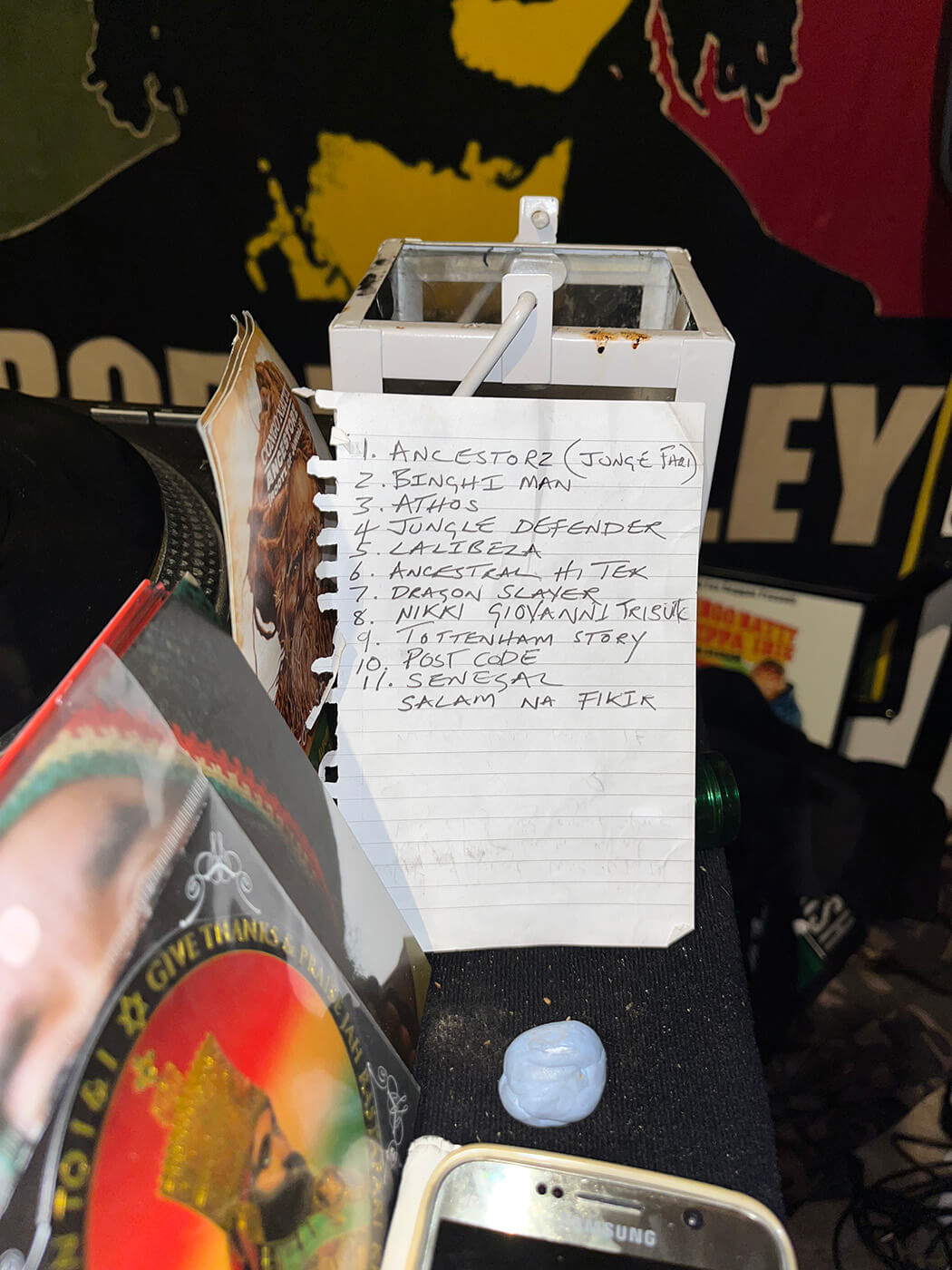 You seem to love a dub siren in your music – can you tell us about them?

I’ve got three different ones. I use one made by Jah Tubbys. He did it for me especially and it’s a bleep siren. It’s fascinating. There could be a documentary about how powerful it is and what it’s doing around the world.

If you listen to a lot of productions after jungle started, other genres used bits of the dub siren. A lot of the elements of jungle have gone into other music because jungle production is so revolutionary, the whole thing. 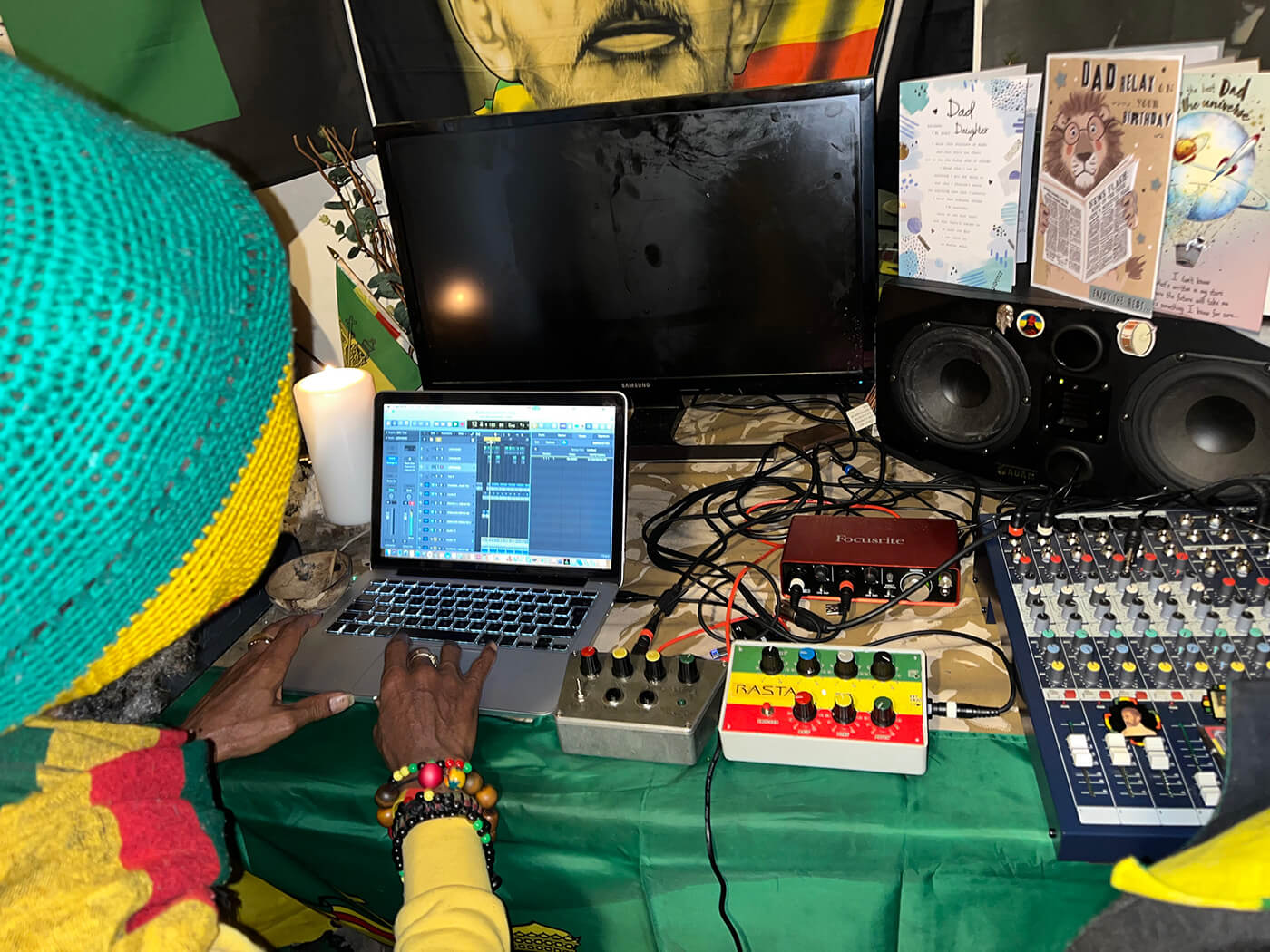 What would your top piece of production advice be?

Make music from the heart and not from your mind. I still suffer from that at this stage of my production career, where I’ll make a song from the heart and then my mind starts going ‘no it needs this and that…’ and you’ve got to draw back and go ‘no, no, no, no’ and we come back to the heart again.

Find your own sound. Don’t try to be another person’s studio. It’s just about being you. I’ve got a [younger] producer just moving in next door now. He did one of the remixes on Ancestorz. It’s his chance now to move into a beautiful new space. It becomes him because your studio is an extension of you.

Stream or buy Ancestorz on Bandcamp.