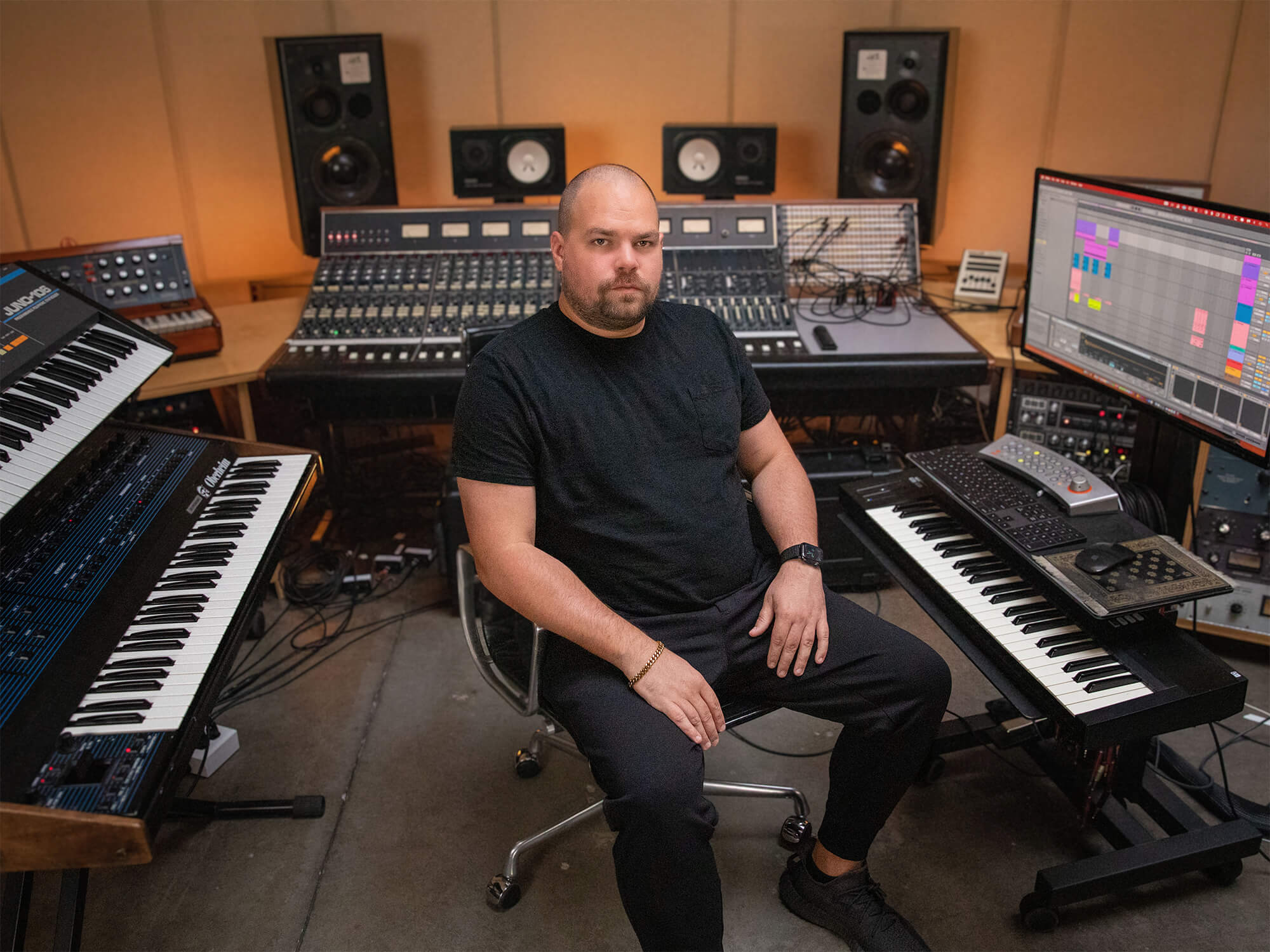 Com Truise on In Decay, 10 years later: “There wasn’t a grand idea. I didn’t really know what I was doing”

As his iconic compilation album turns 10, we voyage through Seth Haley’s galaxy of vintage sounds, sci-fi films and YouTube algorithms.

“Low key, this is one of the greatest accomplishments in electronic music,” reads one of the top comments on a YouTube upload of Com Truise’s 2012 album, In Decay. “Every track on here is a masterpiece in sound engineering,” reads another. “Best album ever… a machine that can send you to another time, place or mood,” says another happy listener. Music fans may have a tendency to be hyperbolic but In Decay has genuinely become a synthwave classic that’s been enjoyed tens of millions of times and has influenced a plethora of artists.

“I don’t know, it just makes me grin,” Com Truise, real name Seth Haley, tells us of the online praise In Decay has received in the past decade. “I don’t feel worthy of it because it was all just me monkeying around in my bedroom. I didn’t really know what I was doing.” 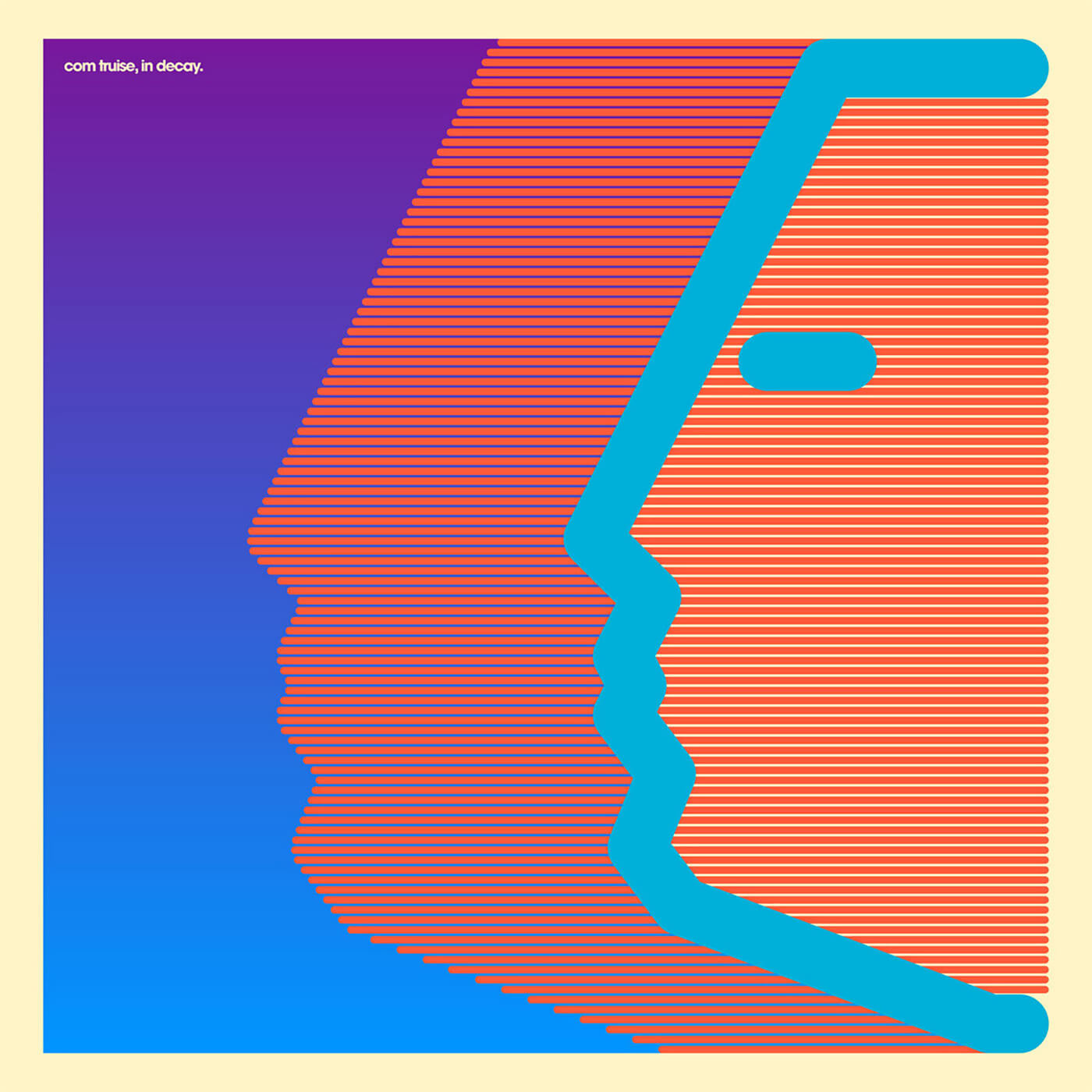 Seth’s Com Truise moniker is one of his several pseudonyms, having also released music as Sarin Sunday, SYSTM and Airliner. Each project boasts a slightly different sound but are all booming with supermassive beats and stellar synth patches. The difference with Com Truise, however, is the concept. Com Truise is a cosmic character – a “synthetic astronaut,” he says – traversing a far-off galaxy in search of new planets. It’s Seth’s background in advertising that grounded him to a narrative for the project.

“It’s having a brief and having to always go back and reference,” he says. “It helped me stay focused and I’m a fan of all the lore in video games. So it’s always nice to have that little thing to tease people with – ‘oh, hey, there’s more behind this.’”

Seth, now stationed in Florida after stints in New York and Los Angeles, compiled In Decay from a batch of unreleased tracks that didn’t fit his 2012 studio album, Galactic Melt. “[The tracks] were on my hard drive – pieces of art that were just decaying with time. So I thought ‘let’s just get them out there.’ There wasn’t a grand idea. My lawyer, who’s also my manager, helped with tracklisting, along with the label [Ghostly]. But it was really my way of shutting the door on stuff and moving forward.”

The compilation album – which received a sequel, In Decay, Too, in 2020 – has arguably become Com Truise’s most celebrated project.

Although the YouTube comments make Seth somewhat bashful, the streaming platform is perhaps the main reason for the album’s success. “Over the years,” he says, “I’ve met more and more people at shows that are like, ‘if it wasn’t for YouTube, I never would have found your music.’ And it just blows my mind because I come from a time before YouTube. I was talking to my buddy who was asking me for tips and I’m like, ‘Dude, I’m all self-taught. There was no YouTube when I started, it was just was a lot of forum reading.’”

Seth adds that, ironically, YouTube is never the first place he’d look for new music but is amazed at how crucial the platform is for music exploration. “YouTube is one of the most important streaming platforms for music discovery, because you can put something on and the algorithm is really, really good at feeding you stuff that it pretty much knows you’re gonna like – which is scary,” he adds with a laugh.

Besides YouTube, Seth was using platforms such as SoundCloud to push his earlier work and also hosted a mixtape series, Komputer Kasts to share his ideas that would end up on In Decay. For the second compilation, In Decay, Too, Seth and his team enlisted the help of a fan who uploaded his unreleased tracks from Komputer Kasts to YouTube. Rough versions of tracks such as Compress-Fuse found their way to the channel and Seth reached out to ask for advice on the new compilation.

“It was basically [the YouTube user] pulling stuff out of [Komputer Kasts] and that led to people taking them and looping them into longer things,” Seth says. “So this guy had just built up an insane amount of stuff that wasn’t released so we asked him, ‘what tracks do you really like that you think would work towards the compilation?’

“For me, those two records are definitely me closing the vault on things. It’s always fun to have the deep cuts to play at a live show or something and it’s a good way to put files in the archive. I don’t need to go back into that file, you know, it’s done, let’s move onto something else.”

In Decay blends the punch of old-school drum machines and the grit and warmth of swelling 70s and 80s synth sounds with modern production techniques and arrangements. Despite Seth producing In Decay mostly with software, the album is oozing with wonky, vintage tones frequently likened to hardware instruments such as the Roland Juno series, LinnDrum and Oberheim OB-X.

As a result, fans of the album say it gives them a distinct sense of nostalgia while opening a window into a futuristic world. But Seth included such sounds for “self-pleasure”, he says. “I really like hearing those sounds, personally. They feel familiar, I don’t know why – I guess because I’ve heard them for my entire life. They’ve been there.”

“And I really like the sound of those classic early drum machine kicks and snares. There’s something about them – they’re crunchy but smooth at the same time. And you can do some interesting things when you tune them, you get different little artefacts coming out and stuff, and I just find that those sounds alone really inspire me.”

Even though Seth’s sonic arsenal is rife with 80s-style instruments, he’s never aiming to make music reminiscent of the era. “I get lumped in with the 80s stuff, but it’s not necessarily 80s – other than the fact that I used some of the instruments of that period. What I really wanted to do was take those instruments and just make something a little bit different; a little bit weirder.

Back when he was making In Decay, Seth was using Reason as his primary DAW and had a more humble collection of instruments than he does today. As well as using some of Reason’s built-in rack instruments and effects, such as the RV7000, Seth mostly built Com Truise’s palette with the Nord Lead and some Korg synths but would have to navigate Reason’s previous limitations with care at the time.

“I was using Reason before it could load VSTs,” he says. “So I would record soft synths and real synths in Ableton Live and drop the big loops into a sampler in Reason and write that way. I couldn’t start [the audio] from the middle, I’d have to start from the beginning of the sample every time. I did things in a really strange way when I started.”

A few plug-in effects did find their way onto In Decay, though, with D16 Group’s Fazortan and Soundtoys’ plug-ins being a favourite of Seth’s. Listen to the synth chords in Smily Cyclops and 84′ Dreamin and you’ll hear the same slow phaser opening up the track and adding some movement.

Seth was also unable to drop audio files directly into the Reason timeline during the making of In Decay. Ultimately, this led to him reaching for the DAWs samplers when working with audio – you’ll hear how he’d use them to chop up recordings at the beginning of Video Arkade and Controlpop.

Recording synths straight to audio and working with such restrictions doesn’t always achieve a desired outcome. But, sometimes, Seth says, the mistakes are worth keeping.

“It’s the happy accidents, the stuff that’s just in there on its own, that I don’t work very hard to get. It’s letting things be what they are and not trying to polish them up.”

With shows like Stranger Things bringing back the 80s-style synthesizer soundtracks, we wonder how much of an impact sci-fi soundtracks have impacted the Com Truise sound. “What really inspires me,” Seth says, “is not necessarily the films, but the things inside the films, like the way that the technology works, the CRT screens, all the little tech that someone had to come up with; how this technology in the future would look.”

Seth jokes that we’re not quite in the era of flying cars yet but adds that the cinematic qualities, set design and sound design are what affected his sound the most. “I like watching those films on my iPad in silence when I’m writing. Just because, for some reason, having that moving picture next to me makes me feel like I can keep going.’

In Decay, Too was touted by Seth as “a bookend to an era. One last transmission from coordinates unknown; a culminating exhale ahead of what’s still yet to come.” Has Com Truise’s mission run its course?

“It’s more about closing off that story. That whole Com Truise, the android astronaut, I’m gonna move on to do a different story. I could keep the story going on forever. I just want to write about something different.”

Thankfully, he tells us another album is on the way along with a film score and that, as he approaches 40 years old, he may consider another tour. We’re yet to see the end of Com Truise’s voyage and, despite its title, it’s clear that In Decay isn’t fading away anytime soon.