CHVRCHES: “Don’t ever stop listening. The day you do is a warning sign”

Lockdowns split Scottish electronic band CHVRCHES across time zones, upending their writing and recording process – and inspiring them to mix their own record for the first time. 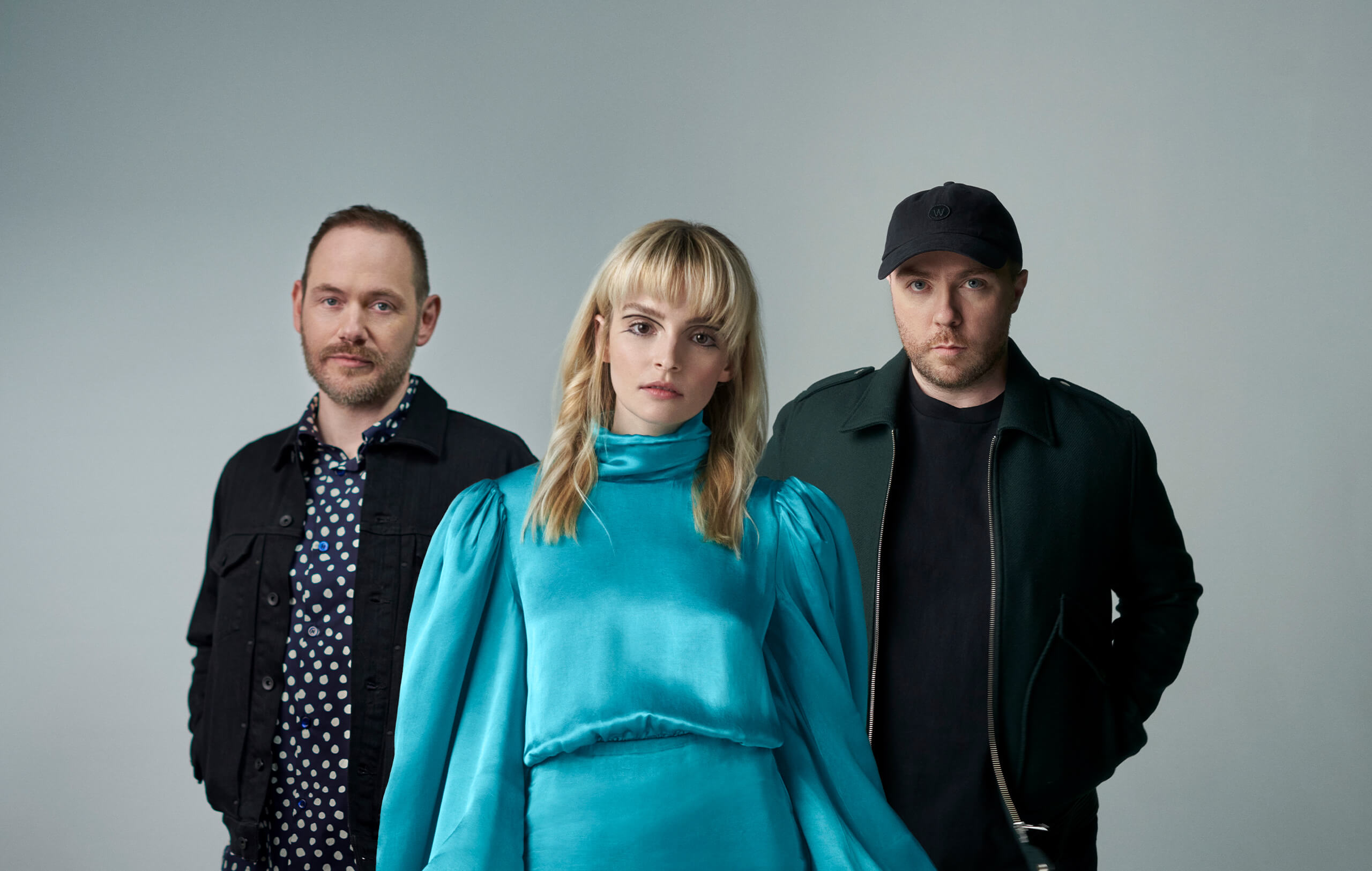 Music technology is bound up in the circuit boards of Glaswegian trio CHVRCHES, not only in bringing the band together but consistently influencing their sound.

“It was in summer of 2011 that I’d bought a Minimoog Voyager and started getting really interested in trying out electronic music,” recalls songwriter and producer Iain Cook. The synth-lover and studio whiz is, appropriately, talking via Zoom with bandmate and collaborator Martin Doherty on making their new record and the band’s origins.

“Me and Martin knew each from being the synth/keyboard guys in guitar bands. I play guitar too, but getting hold of this Moog was the first time it became a creative focus. It meant we had the chance to do something we owned ourselves and wanted to explore.”

The synth became the cornerstone of the CHVRCHES sound. Having connected with vocalist and drummer Lauren Mayberry in their native Glasgow and invited her on board, the trio began acquiring more gear and equipment, gradually expanding, then refining their sonic palette. Those early musical experiments led to fully-fledged critical success.

From the breakthrough debut of The Bones of What We Believe to the half-billion streams of Marshmello collaboration Here With Me, their mixture of emotive electronic textures and beautiful songwriting established CHVRCHES as a defining UK act.

And through 17 years of friendship – a decade of which in the band – Iain and Martin’s shared passion for hardware has endured.

“After the Voyager, we bought this Juno-106, and it was like someone had turned on a light in my head which had never been on before,” says Martin.

“It’s just amazing for bass and pads; the chorus module is so special,” he continues. “When I hear the synth played in a different way, it takes my brain to a place where I want to write all day. We’d be working on the early CHVRCHES songs; Iain had a pedal rig making these crazy sounds with a Doepfer sequencer and a bunch of guitar pedals, then me whacking big pads on the Juno – you can hear this all over our early recordings.”

However, with the new record Screen Violence, out August 27 via EMI Records, Covid-19 measures turned Iain and Martin’s production process on its head.

“Necessity is the mother of invention, right? Making this record was full of challenges and took us to places we would never have gone to if we’d been putting it together in the same room,” laughs CHVRCHES’ Martin Doherty.

Restrictions forced Iain to return to the UK from LA, where Martin and Lauren live.

“We were two or three weeks into the initial sessions when countries started closing their borders,” says Martin.

“But I think we found it inspiring, trying to overcome these new obstacles to our creativity. If it wasn’t for lockdown, I wouldn’t know how to build a compressor, or what the inside of a guitar pedal looks like. Even working across different time zones took us to new ways of working.”

With Lauren, Martin and Iain all flung apart by the pandemic, the band had to research remote working options and platforms. It was vital that they felt like they were working organically and as a group, not just batting files back and forth.

“Listento by Audiomovers was pivotal for us and seems to have been the go-to piece of software for remote musicians in the last 18 months,” says Iain.

“We obviously had Zoom and VNC screen sharing software which allowed each of us to take control of the host session. We also found a way of sharing a part via Dropbox, then importing it straight into Cubase. It meant it felt like we were working simultaneously on ideas.”

Apart from using tech to facilitate real-time collaboration, the group tried to retain spontaneity and spirit in the music by not plotting too detailed a course through their songs.

During the lockdown, Martin went further and developed his own studio with two key aims: to ensure songs remained as vital as possible and to make it easier to work and capture ideas.

“This is the first time I’d ever had a chance to design every step of my studio workflow,” Martin says.

“I find that I need instant feedback from a piece of gear as ideas can come and go in a flash. I wanted to make sure that if I hit a keyboard at any point, I could record it instantly. That way, I would never suffer the anxiety of losing something – all music makers must know what that feels like.”

He says that the Flock Audio Patch system is at the heart of his new studio set-up, around which everything else revolves.

“This system is a 64-point digital analogue patch bay. It means I can move all of the gear on my racks around on the screen like plug-ins rather than having to patch in different sounds [with cables]. It opened the door to me using hardware in ways I wouldn’t have done before.”

While they conspicuously embraced new technology for Screen Violence, musical gear acquisition has been a recurring theme for Martin, Iain and Lauren as they’ve progressed through their records.

“Martin often talks about how investing in a keyboard leads to a new song. Picking up a new item of gear, then exploring it can unlock whole new ways of thinking,” says Iain.

“You then follow it down the rabbit hole to see where you end up. We’re very much about new toys and getting inspired by them.”

From the Roland Jupiter-8 to the Sequential Prophet-5, equipment that had previously lived on wish lists found its way into their sonic arsenal. The powerful Moog One is a particular synth that both Iain and Martin adore.

“It’s almost too good, with too much going on,” says Iain. “It’s like the Formula One car equivalent of a synth. I love it but still don’t feel like I’ve scratched the surface of it yet.”

“It’s obviously really amazing, and if I sat there for months and months, I’d probably master it and enjoy making music,” adds Martin. “But sometimes I wonder whether it’s worth spending months learning how to use one thing when I can hit a button on the Prophet, and I’m in there already?”

Screen Violence marks several steps forward for CHVRCHES’ process and the calibre of collaborators. Rather than using the skills of engineers such as Mark “Spike” Stent, who has mixed previous albums, they instead opted to tackle this task themselves.

“It was a scary decision in some ways, but we were buoyed by the confidence that no one knows the music better than us,” says Iain. “We wanted to have control over every aspect of the sound so we could sculpt it into what we wanted it to be.”

Helping them achieve their vision was The Cure’s Robert Smith with whom they collaborated on the standout track, How Not To Drown. It marks another career high, especially for Martin.

“When you’re 16 or 18, and you’re trying to get your band off the ground, you set out these ambitions,” says Martin. “Collaborating with Robert is right at the top of the list, so for it to happen, it’s really special.”

“Opening track Asking for a Friend is another highlight and one of the most CHVRCHES sounding songs we’ve ever written,” he continues. “It has this tension and release that’s at the core of our music, but it’s a newer version of the sound with extra layers of guitars. In the past, we would have turned them down, but on this record, we’ve let the faders creep up more than before.”

The decision to tackle mixing on Screen Violence has given Iain a new perspective on production: “Be mindful about what you want to foreground in your final mix,” he says. “You can always bring the smallest sounds you want to the foreground, so always consider what you want to showcase.”

Martin, meanwhile, believes continuing to be a fan and retaining a love for new sounds is hugely important for anyone wanting to succeed in the studio.

“Don’t ever stop listening. The day you do should be a warning sign,” he advises. “You should always be learning – and make sure you surround yourself with those who are more talented than you, so you never stop developing new skills.”

Visit chvrch.es for more. Look out for details of their upcoming live gigs and tour.