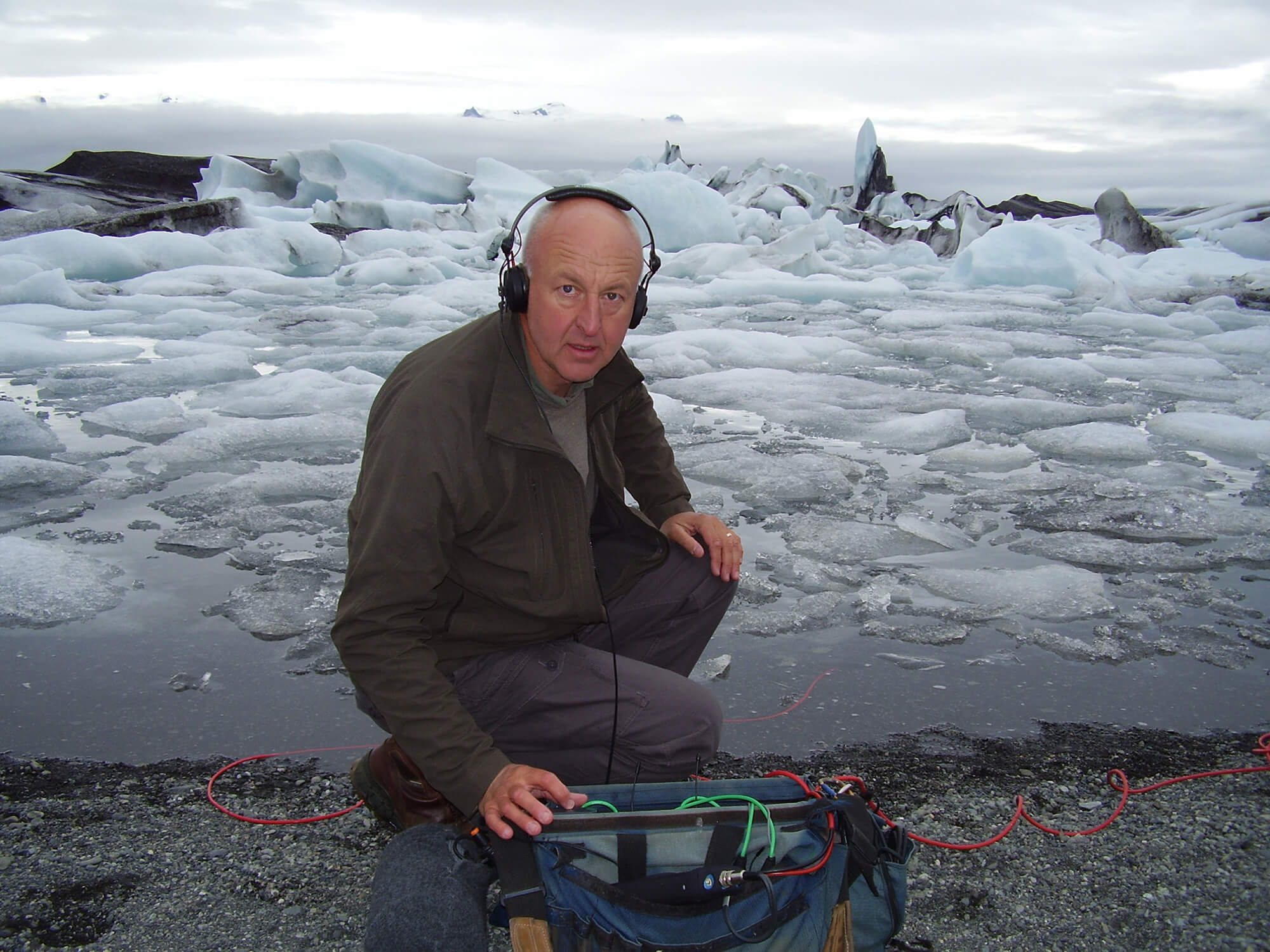 A life spent listening: Chris Watson on the hidden music of our world

The veteran sound recordist on his new project WEATHER, the beauty of immersive audio, and the connection between music and nature

Whether you know it or not, chances are you’ve heard Chris Watson’s work. As one of the world’s premiere field-recording experts, he’s been tapped to provide sonic backdrops to everything from MMORPG World of Warcraft to iconic David Attenborough documentaries such as 2011’s Frozen Planet, and this year’s The Green Planet.

And that’s just his day job – if you’ve ever been lucky enough to hear his musical works, then you know that his craft extends far beyond documentation. Letting his field recordings take centre stage, Watson immerses listeners in an environmental narrative that’s every bit as enthralling, surprising and evocative as any song or symphony.

He also co-founded Cabaret Voltaire in 1973, the experimental post-punk outfit whose sound influenced the industrial music of bands like Skinny Puppy and Trent Reznor. It might seem paradoxical for a man with a professed love of natural-sounding environments to have helped form a group focused on DIY electronics and tape manipulation, but the common thread that connects all Watson’s endeavours is his ability to hear music that others might miss – whether it be a bird call or the buzz from self-built oscillators.

“I like the idea of letting these places speak for themselves,” says Watson. “If people get the chance to hear them, to be immersed in them, to engage with them, then they will understand the significance of these places and it will be blindingly obvious that they need our protection.”

Recording landscapes that can “speak for themselves” is not as simple as plonking a microphone down and waiting. Each of the places heard in WEATHER required a specific technical approach and an artist’s sensibilities. From the Namib Desert, which crosses Angola, Namibia and South Africa, Watson focused on the process of wind erosion that has shaped the land over aeons. “It’s a remarkable habitat,” says Watson. “Fragile, beautiful and really quite hostile. I was fascinated by a place that is often regarded as quiet or even silent – of course, it’s not silent.” 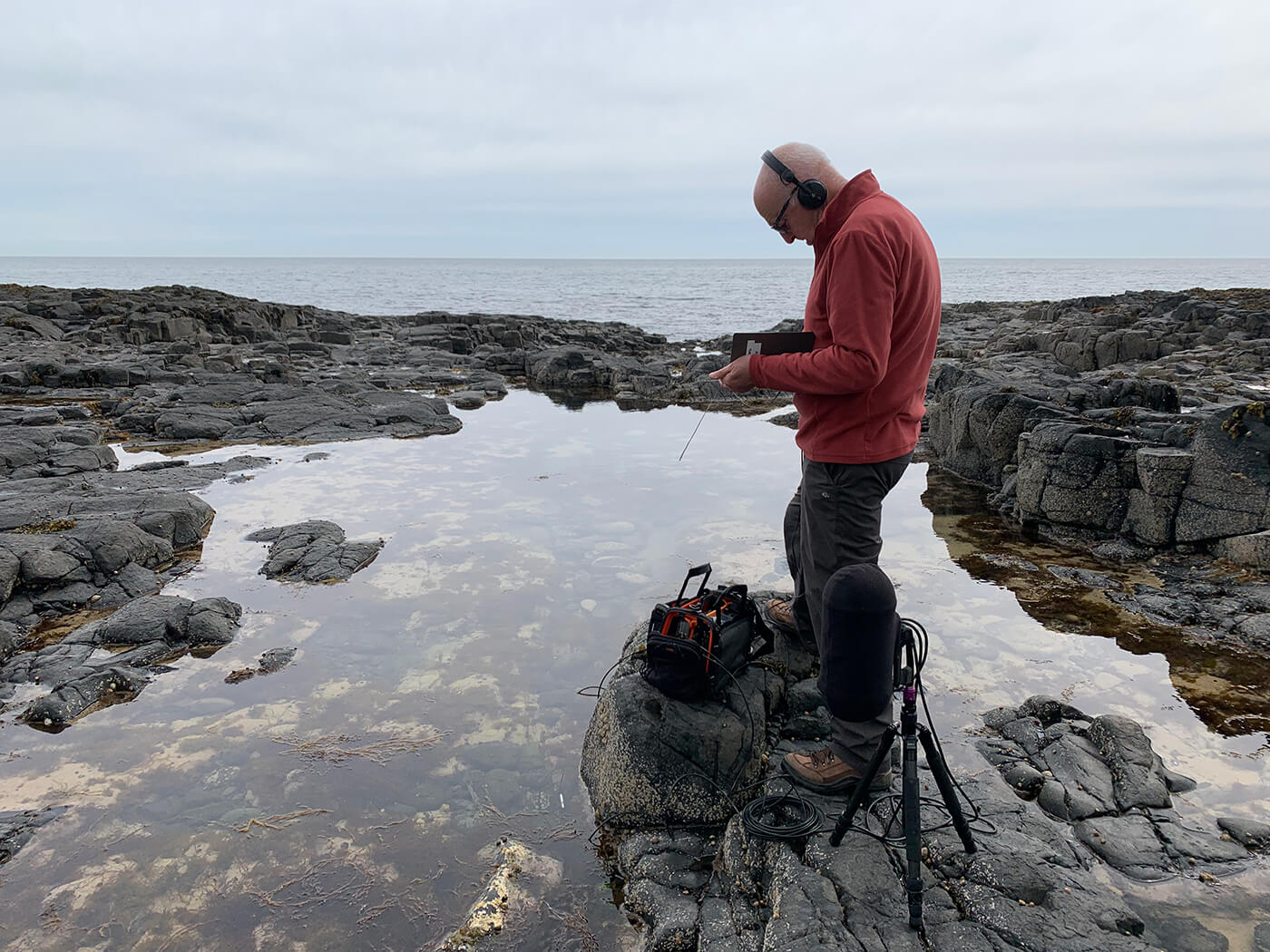 Using hydrophones, which are specialised for underwater recording, Watson focused on capturing audio from within the dunes themselves. “I used these mics as geophones,” he says, burying them underground to uncover the sound of grains slipping down the side of the dunes, and the deep vibrational hum of wind resonating through the dirt and sand. “One of the things I enjoy most is teasing out sounds that are perhaps hidden or not immediately apparent.”

By contrast, the Amber Mountain rainforest in Madagascar could never be described as silent. “The interesting thing about rainforests is you see very little, but you hear everything,” says Watson. “It’s very dark and there’s a dense tree canopy but that allows you to really tune in. And because Madagascar is so exotic, a lot of the species you hear are endemic; they occur nowhere else in the world.”

With the aim of capturing the sound of a single day in progress, Watson recorded over the span of several weeks using Ambisonic surround-sound microphones. The results are about as close as your ears can get to the sound of Madagascar without buying a plane ticket.

Nearer to home is Watson’s recordings of England’s coastline. Just off the shores of East Anglia, Norfolk and Suffolk is a geological event called the longshore drift, which has gradually eroded large swaths of land. “I discovered a story about this medieval village called Dunwich,” says Watson. “It was the fourth-largest port in England back in the 11th century but, over a couple of hundred years, it was washed into the sea by coastal erosion. The local fishermen say they know when the weather is changing because they can still hear the bells of the cathedrals tolling in the deep. Of course, that really caught my imagination.”

The last environment that Watson presents in WEATHER is the Vatnajökull Glacier in Iceland, a location he first profiled in his seminal 2003 album Weather Report, and one that he’s returned to many times over the decades. Using an array of hydrophones buried in the ice, Watson recorded the eerily beautiful and deeply unsettling sound of a glacier melting in real-time. “I was listening to the sounds of air that’s been trapped in the ice for 10,000 years being re-released back into the atmosphere.”

Watson’s recordings might make you feel like you’re standing on a mountain slope or diving under the ocean but peek behind the magician’s curtain and you’ll see there’s a lot of studio production work involved. Recordings from multiple microphones, at different times of day or even field trips that occurred years apart are combined to achieve one cohesive ambience. “You’re creating an illusion,” Watson says of the artistic process. “It’s like film-making or composition, it’s not reality.”

At the same time, Watson has a high level of integrity when it comes to his work, and refuses to use sounds that he didn’t record on location. It’s an ethical standard learnt and internalised during long years in the BBC Natural History department. “I don’t mix together things that wouldn’t occur in the natural world – all the sounds are from those places, and I’ve not pulled in elements from elsewhere. For me, just personally, that’s very important.”

Watson’s enduring fascination with sound recording goes back some 50 years, to early childhood and an unlikely present from his parents – a portable reel-to-reel tape recorder. “It was a pretty inspired gift,” he says, with a laugh. “I mean, I don’t remember asking for it but I’ve still got it in my studio, to remind me where I started.”

As a teen, Watson discovered musique concrète and the tape music of influential contemporary composers such as Pierre Schaeffer and Pierre Henri. “I realised that you could create music with a tape recorder. It wasn’t just a device for documenting sound – you could cut and splice the tape, you could slow it down, speed it up, play it backwards. It was a very tactile instrument.” 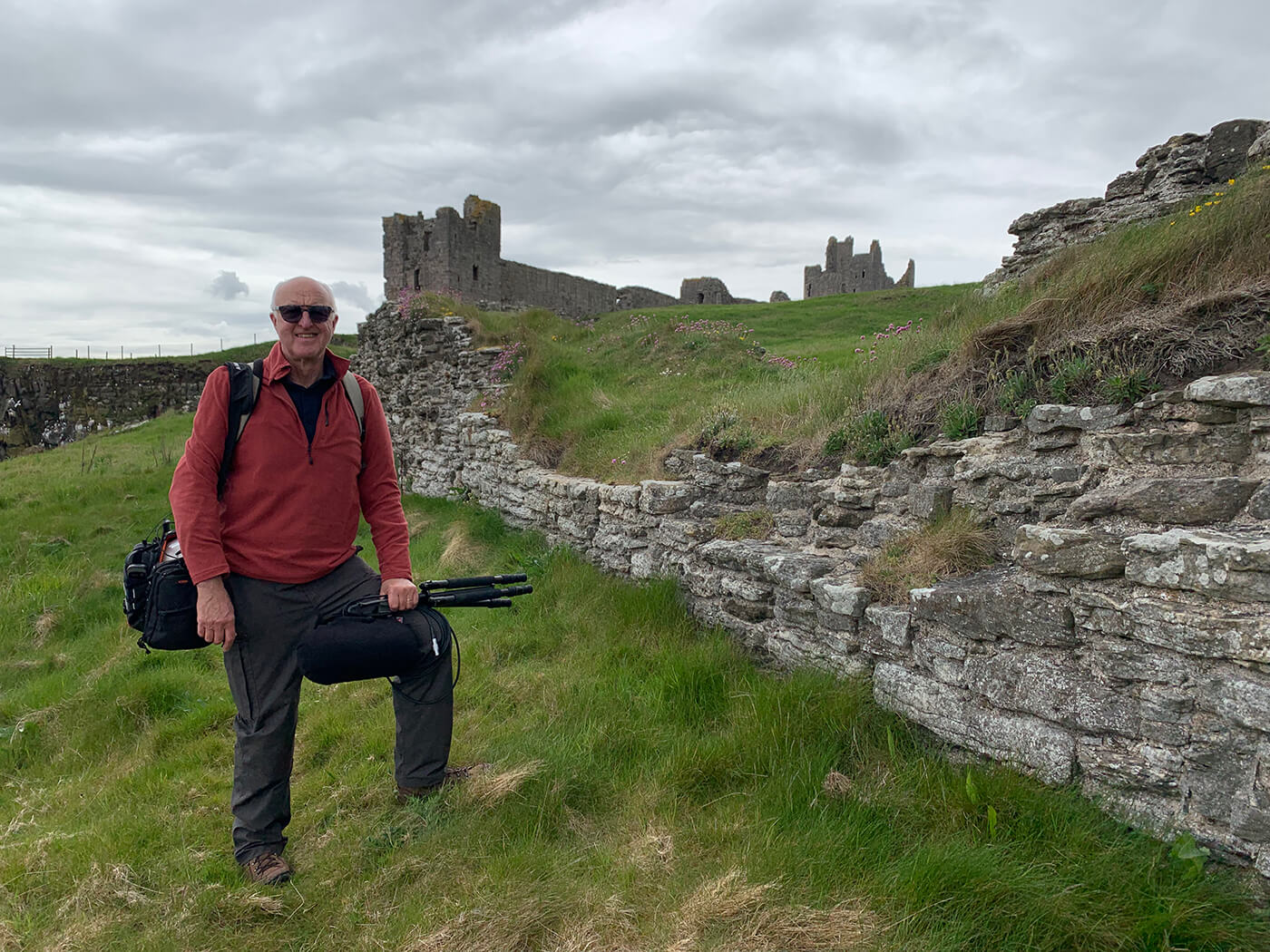 These days, rather than analogue reel-to-reels, you’re more likely to find Watson armed with the highest-spec digital recording equipment, such as the Sonosax SX-R4, or the Cantar Mini, which he describes as “bulletproof”. The tools of his trade may come with eye-watering price tags but, when you’re thousands of miles from the nearest hi-fi store, equipment failure is simply not an option. Since focusing more on Ambisonic recordings, Watson has also become very acquainted with surround-sound mics like the Soundfield ST450 MkII and Schoeps double Mid Side array.

The benefit of Ambisonic surround-sound recording is that it can adapt to the most extravagant multi-speaker sound systems to produce an utterly convincing sense of space. A recent premiere of Watson’s installation piece SEAPHONY in Berlin featured 32 separate speakers across a 500 square metre space to create a sensory experience that goes far beyond what you’ll get with Apple’s Spatial Music and a pair of Bluetooth headphones.

“It’s the best way for me to present my work,” he says. “Once a record is out in the world, you can’t control how people will listen to it, but when this kind of music is presented properly, particularly in a big space with a good system, it’s frighteningly good.” 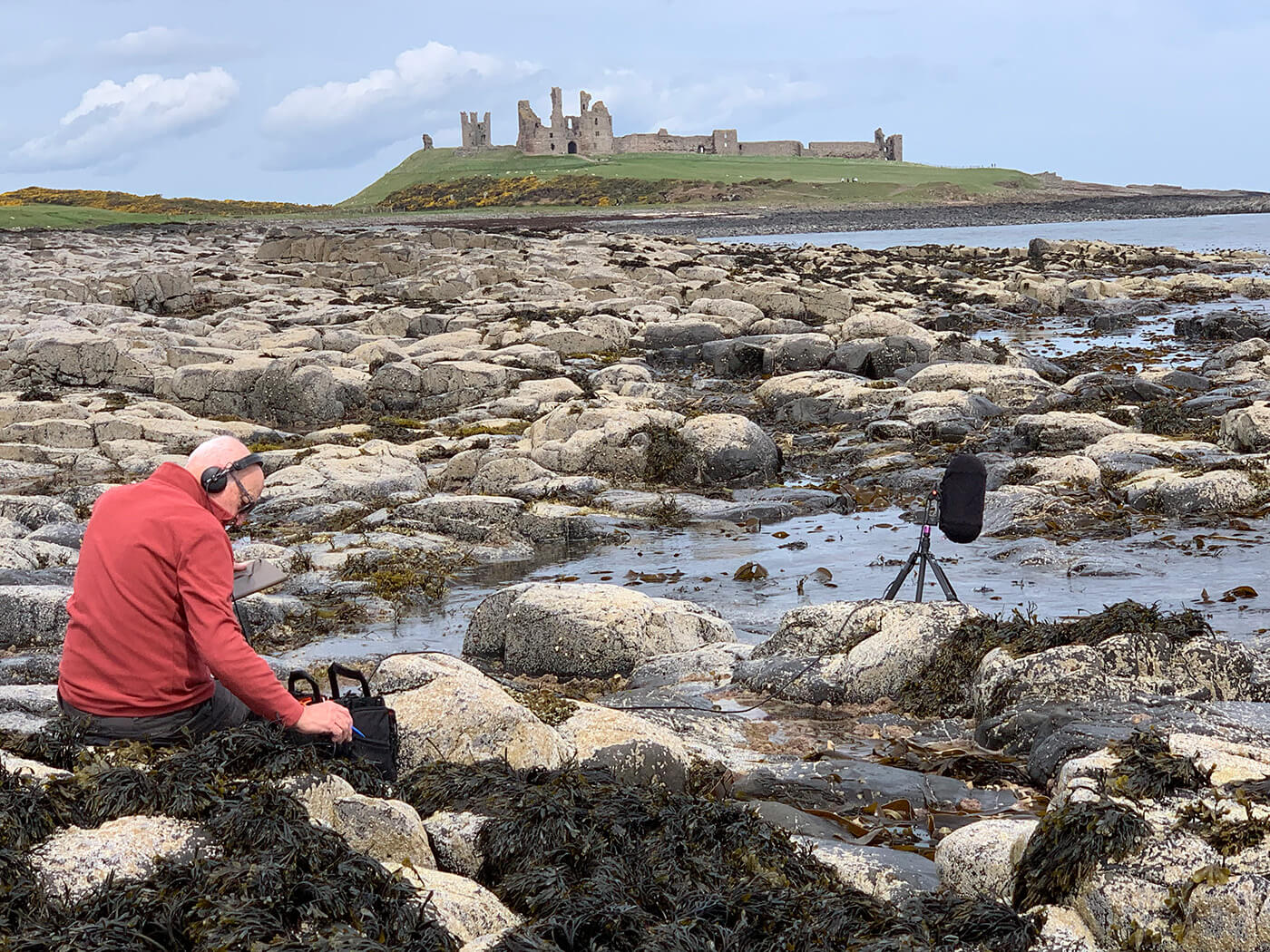 Watson’s desire to present his work in the most impactful way possible goes beyond audiophile purism to a belief that immersive art forms have a role to play in helping people connect with issues like climate change; not on an intellectual level but on an instinctual one. Concerts like WEATHER convey the urgency of their message not through lecturing but by connecting an audience to the beauty of the natural world, and to the visible and audible impact that humanity is having on that beauty.

“I’m of the opinion that all our music, from all our cultures around this planet, evolved from people listening to the sounds of the natural world and mimicking them,” says Watson. “Wherever I go, when I hear music, local music or folk music, I hear the connection to the natural sounds of those places.”

By drawing out the threads of melody and rhythm inherent in nature, Watson’s work highlights the “powerful, visceral connection” that exists between ourselves and our environment, reminding us of what should be obvious. “I listen, that’s what I do. I just listen and let the sounds appear, let them speak for themselves and tell their story.”