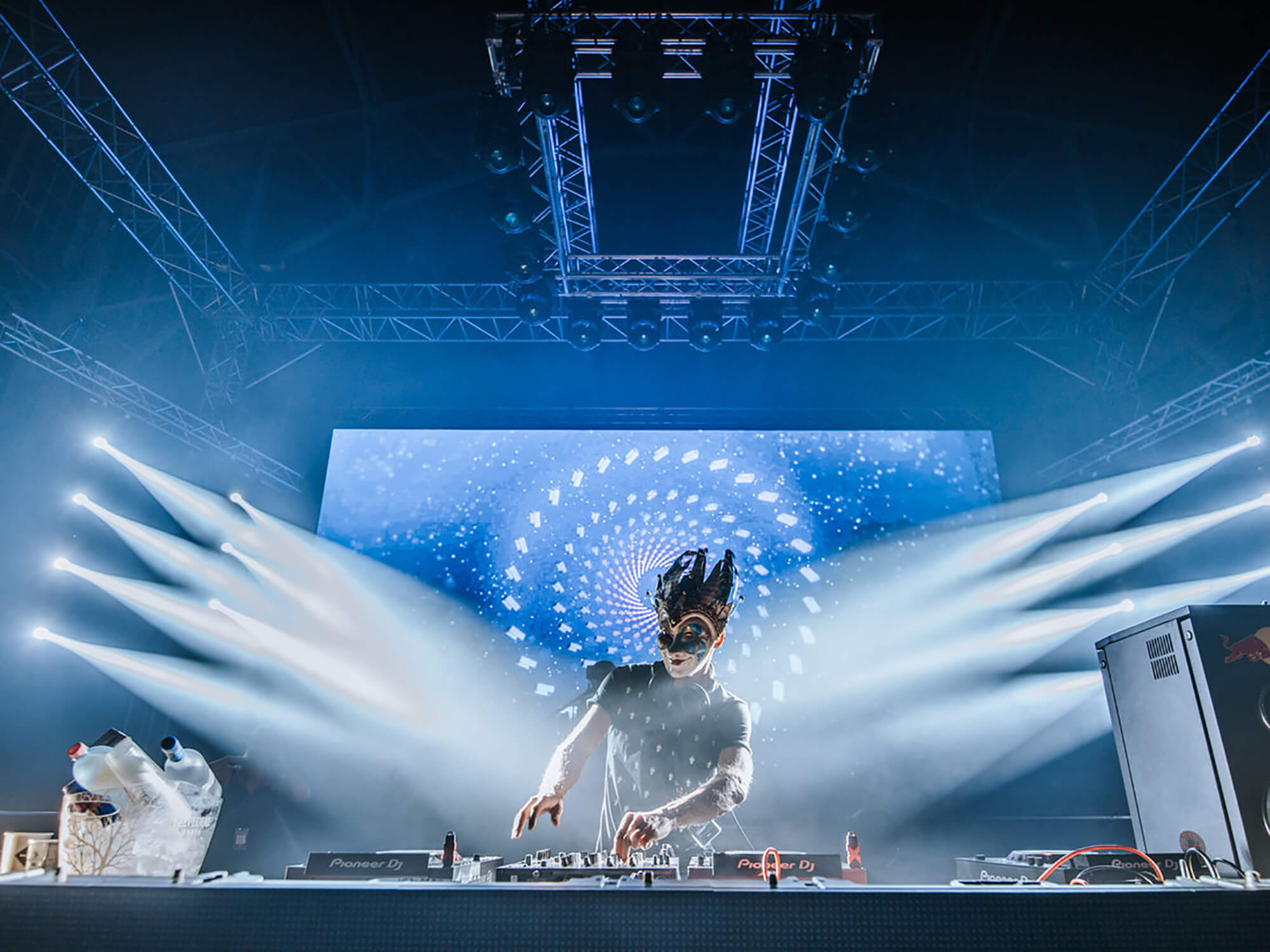 Should an album convey a story or concept? For the masked German producer, it’s more about the feeling.

Beyond his reverence as an international touring artist, Germany’s Boris Brejcha is known for championing his own style of dance music: high-tech minimal.

The term ‘minimal’ refers to a niche genre within the four-on-the-floor zeitgeist before Brejcha’s time. It’s his addition of ‘high-tech’ to the front of the title that indicates his departure from the expectations of the preexisting scene.

In listening to Brejcha’s expansive discography that includes dozens of singles and 12 full-length albums, the most recent of which is 2021’s Never Stop Dancing, it’s clear that high-tech minimal contains elements of a diverse palette of styles. Influences of trance, techno, and even tinges of more sensational styles such as big room house play a role in the unique sound.

But the idea of minimalism envelops much of Brejcha’s artistic identity beyond his bespoke style of production. He has found uncomplicated methods to engage various aspects of his project. These methods have elevated him to one of the most in-demand acts in house and techno. Where artists of his stature may invest thousands of dollars in building studios with prestigious gear, Brejcha produces purely in-the-box. He doesn’t own a single piece of hardware.

“Back when I started producing music, I didn’t have the money to buy hardware. Software was just cheaper and I could start faster. In the meantime, I got so used to it and got along so well with it that I now wouldn’t want to change it,” Brejcha tells MusicTech.

There are some critics who may see this as a myopic and shackled approach to the boundless landscape of music production, but Brejcha’s massive success as an artist and persistent optimism as a human being demonstrates that a minimalistic approach provides considerable freedom. Brejcha knows what works for him, and he continues to take what works and expand on it.

“Musically, I can do everything I want. There are no external guidelines,” Brejcha says.

From a perspective of pure sonics, Brejcha’s minimalist approach is overt and apparent. He only produces one genre. High-tech minimal doesn’t have a place in record shops, and there are no other artists to compare it to.

But Brejcha uses this lack of reference to his advantage. Brejcha decides what high-tech minimal is, and the dancefloor takes the ride with him.

Tracks on Never Stop Dancing like Afterlife include eerie string passages while Hold Your Speakers grasps the full potential of raw and raging basslines. Himmelblau is a progressive, oscillating piece that takes on a whole new form by the end of its more-than-eight minutes.

Being independent of any genre restrictions, all of these differences come as a result of Brejcha’s different feelings rather than any conscious decisions to make this or that. 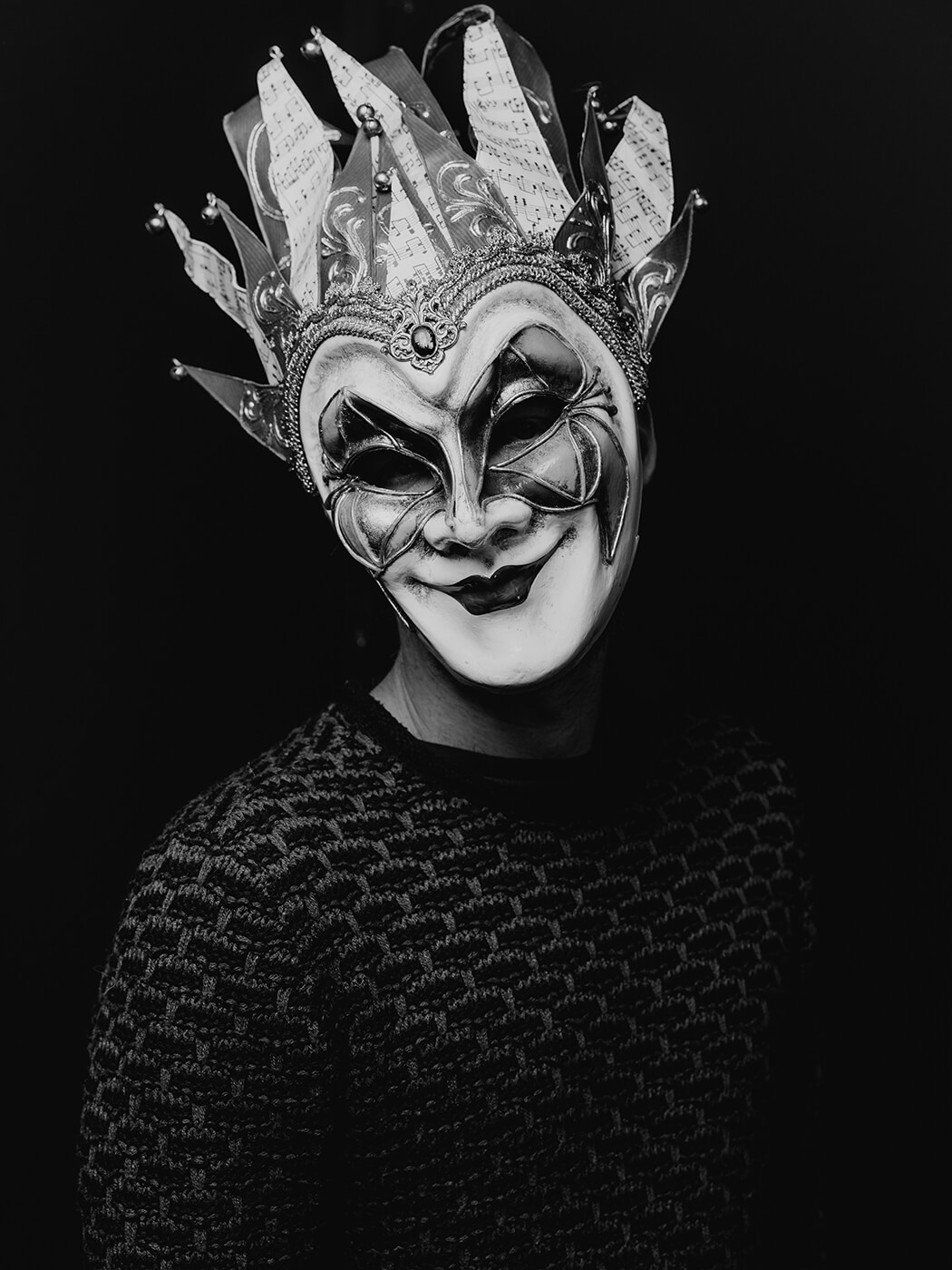 “I don’t think I give it that much thought at all,” Brejcha says. “It all comes from feeling. I try to do different things that I like and then try to combine them. Whether it fits together later, I don’t know beforehand.”

Brejcha’s inspiration stems from minimalism as well. He often won’t look further than his immediate surroundings. Whatever is literally happening in Brejcha’s environment at the moment defines the identity of the music, and he’s used this direct technique to channel a level of intelligent contrast rarely found in clubland.

An example of this is the forefront in Gravity, the opening track from Brejcha’s 2020 album, Space Diver. The foundation of the cut is a spacey, dark atmosphere, precisely aligned with the album’s title. Galloping psytrance low-end propels the music forward as sporadic blips mimic bursts from laser cannons on a star cruiser.

But when the breakdown sets in, a warm and vibrant piano washes away the previous aural setting. Suddenly a brooding dance track has become a melancholy love ballad, and the reason why is simple. “The melody from the piano part was a dark and sad moment. It was raining outside and I was alone,” Brejcha says. 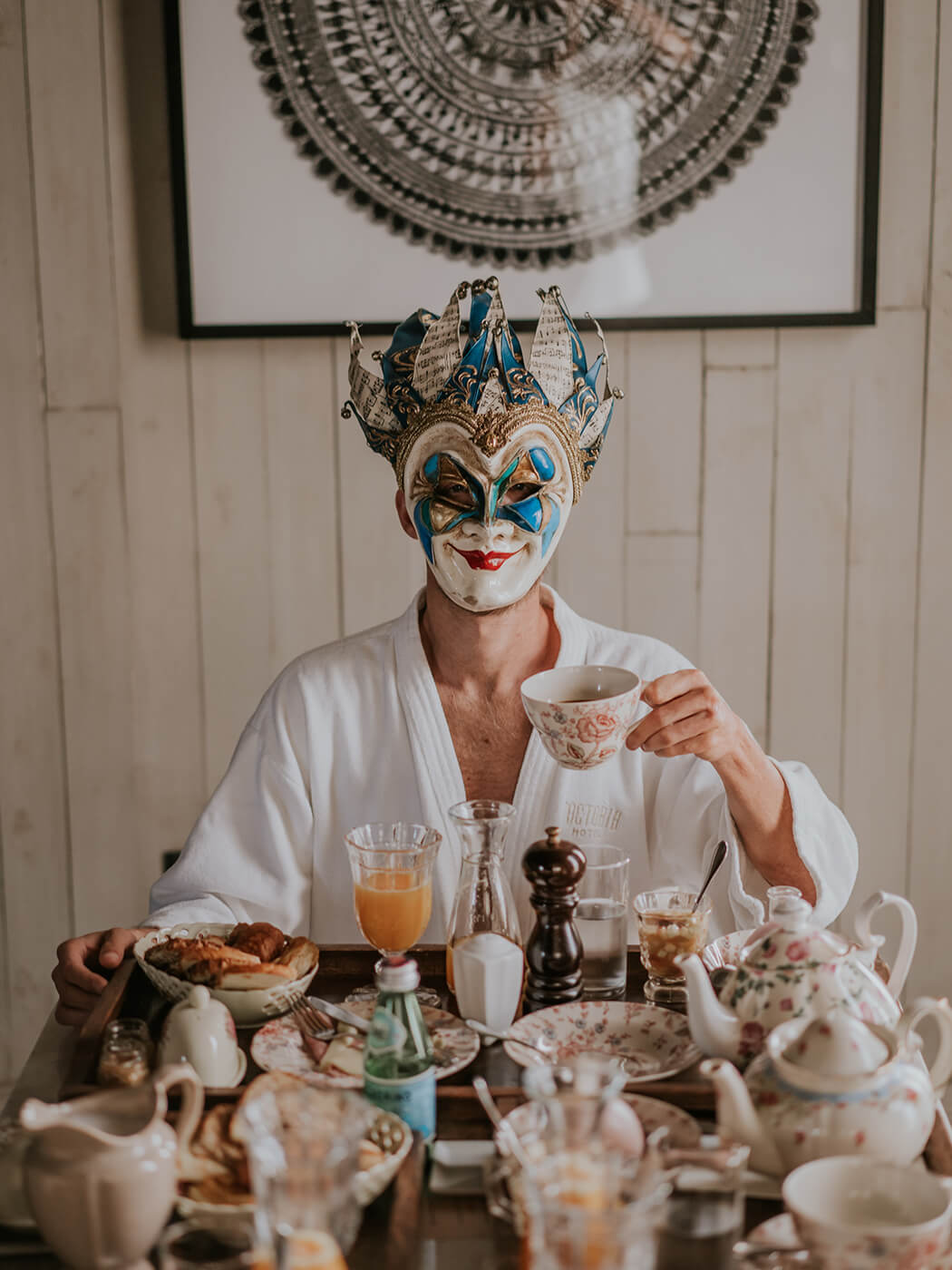 This is what allows Brejcha’s DJ sets to remain so dynamic and interesting despite the fact that he only plays tracks from his own catalogue. His music is as complex as the moments in his life, and his sets are like authentic glimpses into his day-to-day.

Brejcha frequently opens his sets with Gravity, immediately demonstrating the emotional range that listeners can expect from the impending journey, and then the qualitative variance of high-tech minimal opens the door to any number of musical outcomes.

Logistically, Brejcha’s sets never fall victim to stagnation because of his sheer ability to complete new music at a rapid pace. He has found a working rhythm that’s allowed him to produce two 12-track LPs in less than two years.

Some might say Brejcha’s production schedule is rigorous, but it’s also minimalistic. In phases of music-making, he generally begins a track idea on Tuesday, spends Wednesday and Thursday arranging, and by Friday he is fine-tuning and mastering. If he’s not happy by Friday, the track usually goes in the trash, and the cycle begins again the next week. 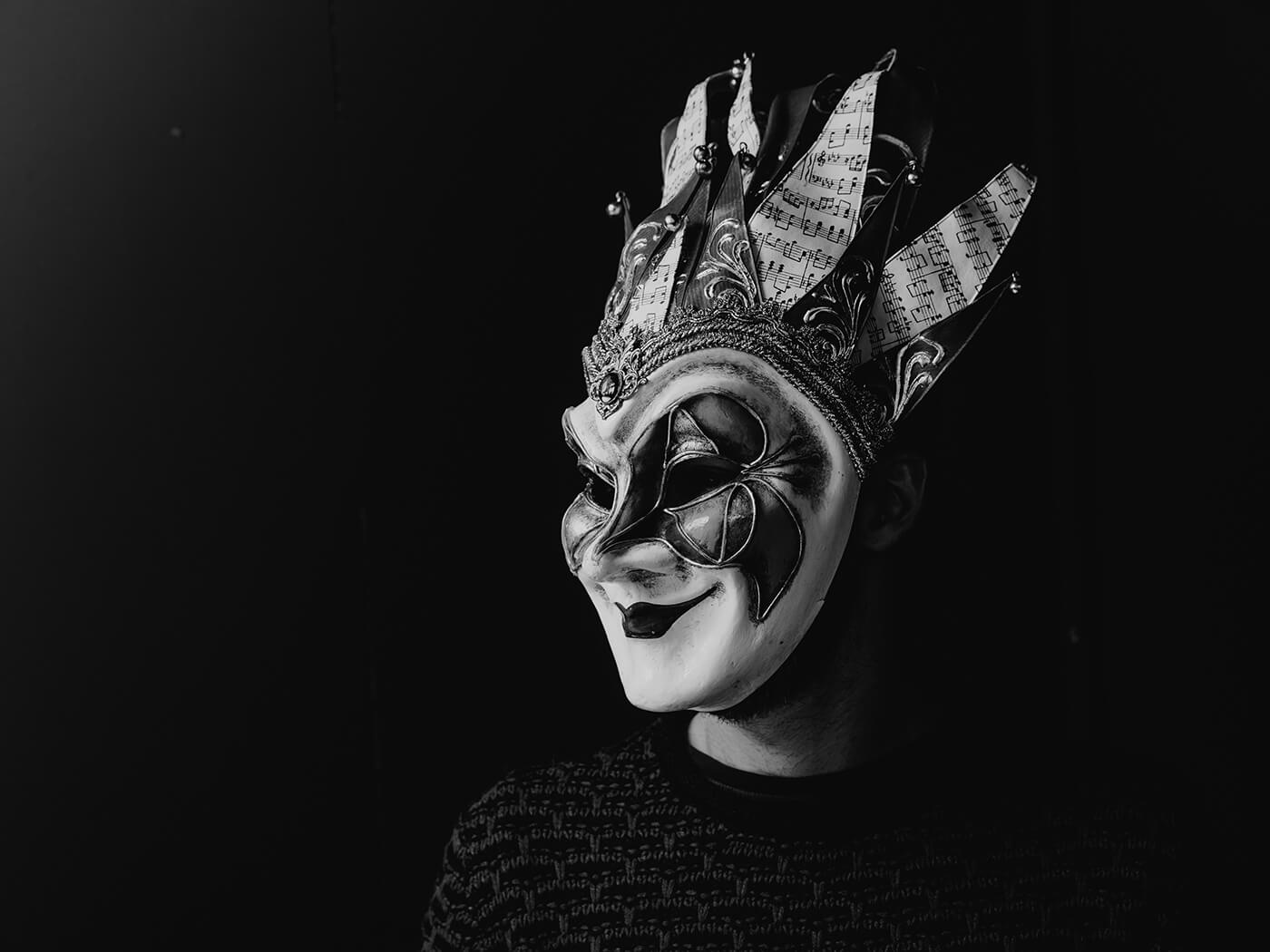 A common issue amongst some producers is the hesitancy of walking away, in coming to the decision that something isn’t working. Sure, old works-in-progress can amount to new ideas in the far future, but it’s far more effective putting time and energy towards work that is exciting.

With such a defined production schedule, it’s clear that Brejcha is excited about every track he releases.

“I like to work productively. I don’t want to spend too much time on things that don’t make sense,” Brejcha says. “I have simply noticed that it works best for me personally. If I want, I can take more time for a song or less.”

An element that frequently shakes up Brejcha’s production process is collaborating with vocalists. Of the 12 tracks on Never Stop Dancing, six of them feature vocals. London-based alt-pop duo Arctic Lake provided a haunting serenade to the piano-driven House Music, and the remaining five tracks include vocals from Brejcha’s real-life partner, Ginger. 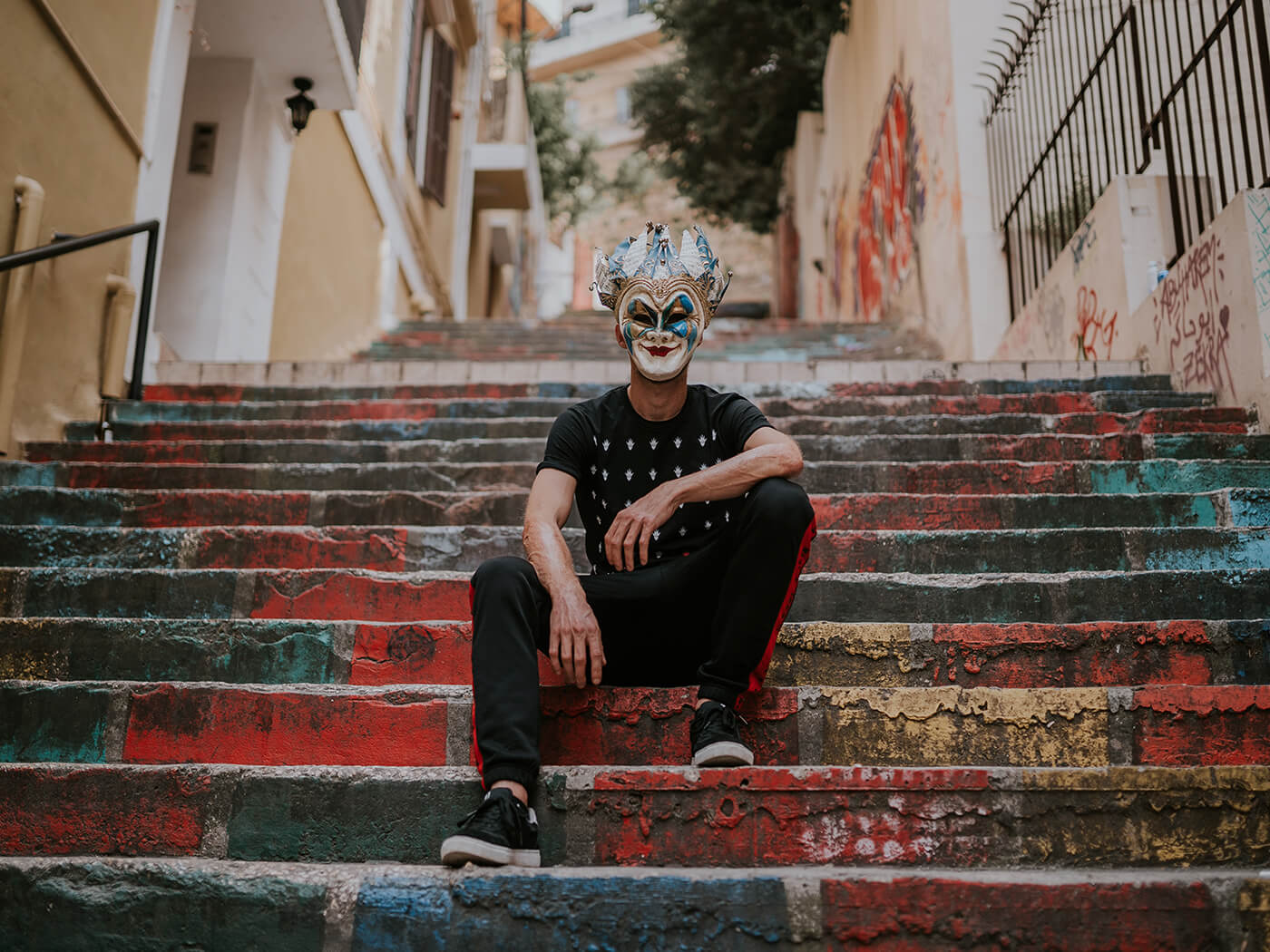 Ginger’s voice has been a centrepiece across Brejcha’s last two albums, and his untethered method for producing music has served as an opportunity for Ginger to demonstrate her own versatility as an artist.

Take A Ride, the first single that would end up on Never Stop Dancing, features Ginger providing a classic spoken dance music hook that hits right before the drop: “You want to join me?/I’m gonna go for a ride.” Whereas “State Of Mind sees Ginger apply a strong sense of tone in her melodic vocal that defines the breakdown.

The real-life chemistry between Brejcha and Ginger undoubtedly permeates through the music to a far more personal level, and with their close connection, she can easily join him in his workflow.

“When I bring in Ginger for a vocal, she usually joins me in the middle of the arranging. We come up with something together and then record it. How I incorporate that is up to me,” Brejcha says. “With external artists, it is always different. Sometimes I give a loop and they do a matching vocal. Sometimes I get ready-made stuff and build the song around it. There are no limits.” 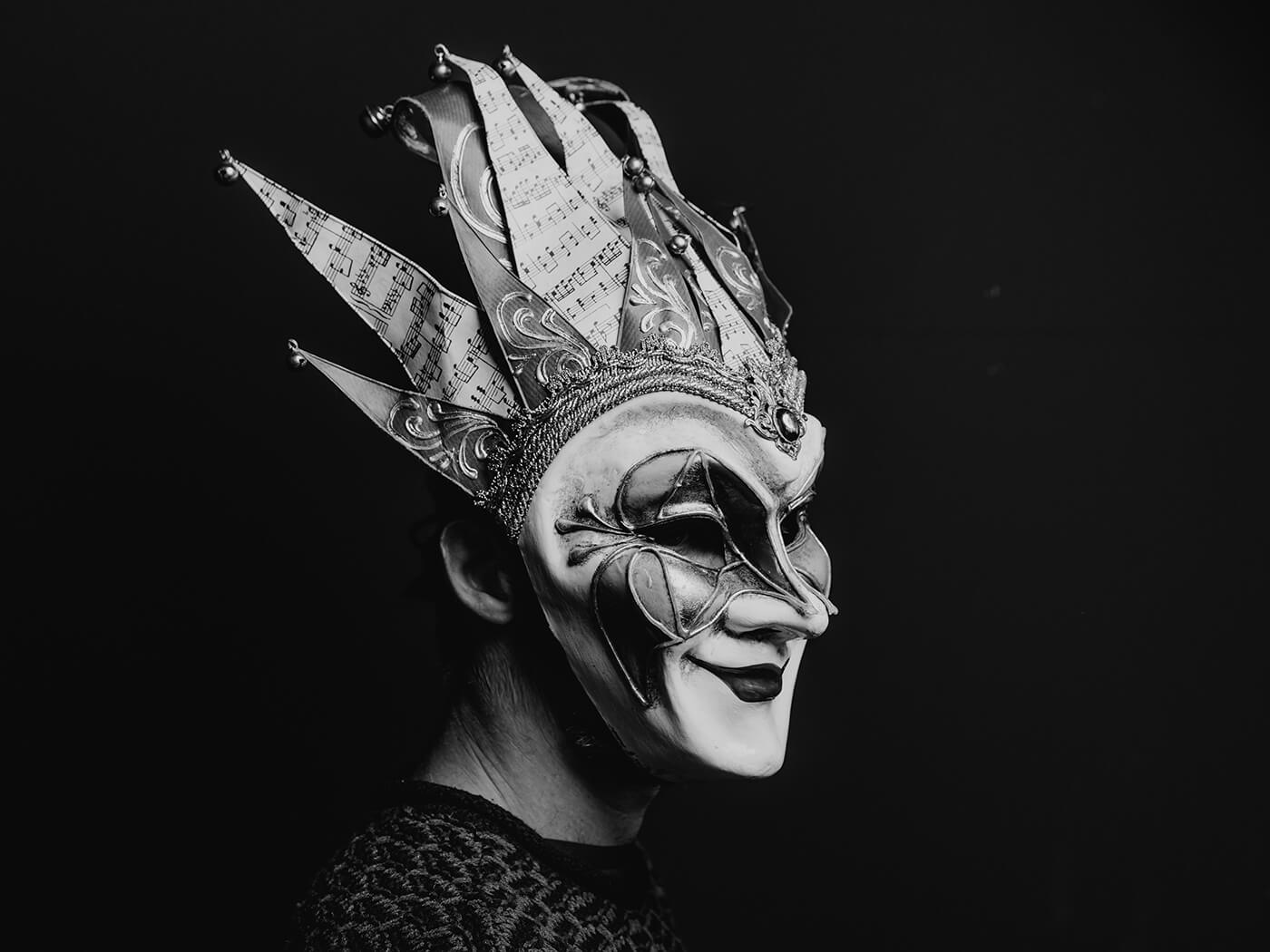 That’s the real benefit of minimalism in music – a lack of limits. The freedom to decide how much or how little. As more moving parts become involved in the track or album, the ability to interpret meaning narrows for both the creator and the listener.

Brejcha gives listeners their own interpretation of the meaning behind his albums because he doesn’t apply a theme to them.

“It’s true that I just release songs that I currently like the most. Each track in itself, of course, has a meaning and tells a certain story. But the whole construct of ‘album’ doesn’t follow a bigger theme,” Brejcha says. 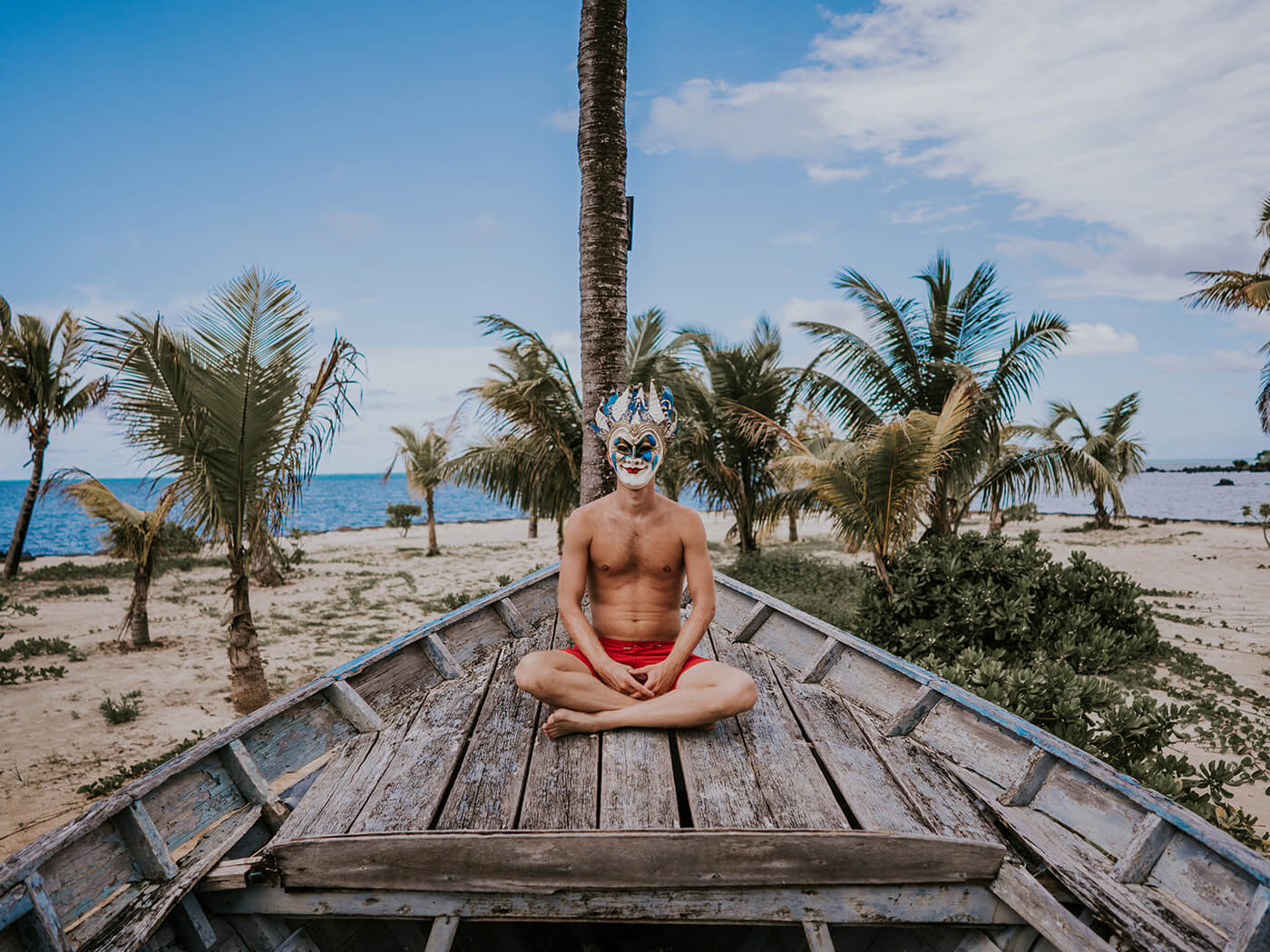 The 12 tracks on Never Stop Dancing; the 12 tracks on Space Diver. They were placed together in a particular order for no other reason than Brejcha liked how they sounded as one body of work. It’s that simple. It’s that minimal.

Perhaps that minimalistic intention is one that’s served as an avenue to Brejcha’s rise in prominence. His music, his sets, his albums, listeners can attach any meaning they want to them. The door is open to take a journey inward every time a high-tech minimal track launches through the speakers.

Or rather, the door is open to forget about meaning and symbolism. To strip away any underlying themes and just revel in the moment. To dance until Brejcha and his Venetian carnival mask leave the decks.

The choice is yours.