The Scottish composer discusses narrative in film music, the need for live performers and the sounds of the USSR. 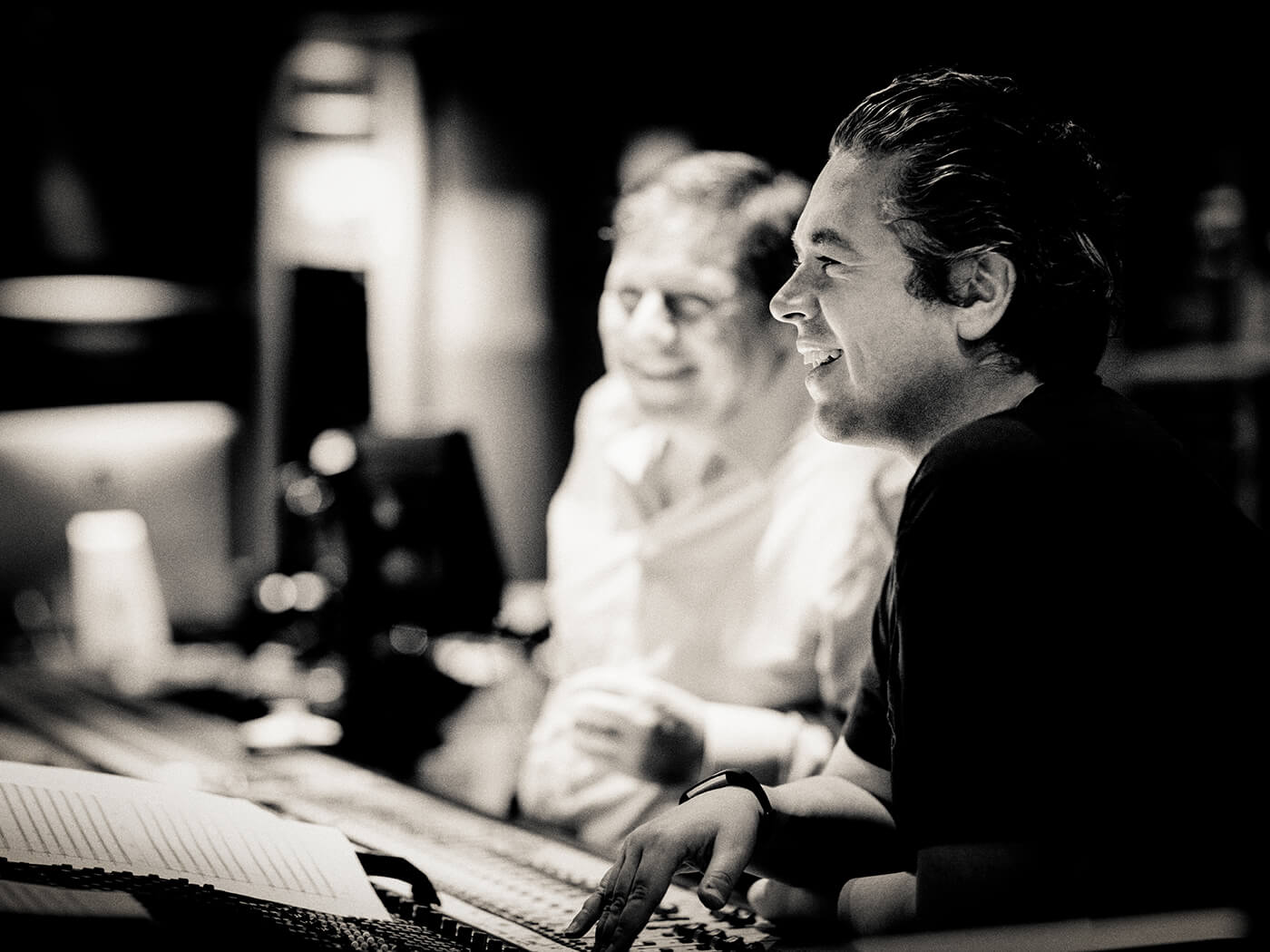 “The joy of having live musicians compared to technology is that they make mistakes,” says Lorne Balfe. From his home in London, the composer is talking to us about his epic new score for Marvel’s Black Widow and why there’s still no substitute for a real live orchestra. “Those mistakes, they lead you down different paths of creativity.”

A prolific composer for film, TV, and games, Balfe has built a reputation as a master of large-scale orchestral composing. Those skills were put to the test last year as he assembled the biggest orchestra ever seen at Abbey Road Studios – that’s 116 musicians – to record his score for Marvel’s Black Widow.

Long delayed and much anticipated, Black Widow finally hit theatres and Disney+ on July 9, giving the character of Natasha Romanov, played by Scarlett Johansson, her first stand-alone entry in the Marvel Cinematic Universe (MCU). Set before her climactic demise in Avengers: Endgame, it’s the origin story fans have been waiting for – or, as the composer puts it, “We know where Natasha’s journey ends. This film is about how it began.”

Balfe grew up around music, quite literally – his home doubled as Highland Recording Studios, a residential studio, and his father was a songwriter. “Lots of bands would come through,” he recalls. “Ozzy Osbourne would record there, Echo And The Bunnymen. So, I was always surrounded by music and music technology.”

At age 10 he was learning to programme music on a Fairlight CMI, and by 15 he was spending the school holidays working at local recording studios. It wasn’t long before Balfe’s musical talents began to connect with his love of film, and specifically his love of Hollywood blockbusters.

“I got into movies because of Jerry Bruckheimer,” he says of the Top Gun and Bad Boys producer. “The movies that he made were the ones that I always wanted to work on. He’s the reason that I fell in love with cinema.”

One of our #BlackWidow recording sessions @AbbeyRoad Studio One. The soundtrack is available here: https://t.co/uJUXqbOv1b pic.twitter.com/wFdWXkLdsG

After starting out on short films and commercials in the late 90s in London, Balfe looked to the United States for opportunities to build his career. In 2000 he secured an internship at Remote Control Productions, the LA-based film scoring company founded by the now legendary Hans Zimmer.

“At the time, I didn’t fully appreciate the size of it,” he says of his move to the States. “I went over basically as a tea boy, as an assistant. And I was there for 15 years.”

During that decade and a half, Remote Control Productions grew from a heavyweight film scoring company into an industry juggernaut. Under Zimmer’s direction, the studio provided scores for franchises like Transformers, Pirates of the Caribbean, Shrek and many other top-grossing films of the 2000s and 2010s – creating a new blueprint for the ‘blockbuster’ Hollywood film score. 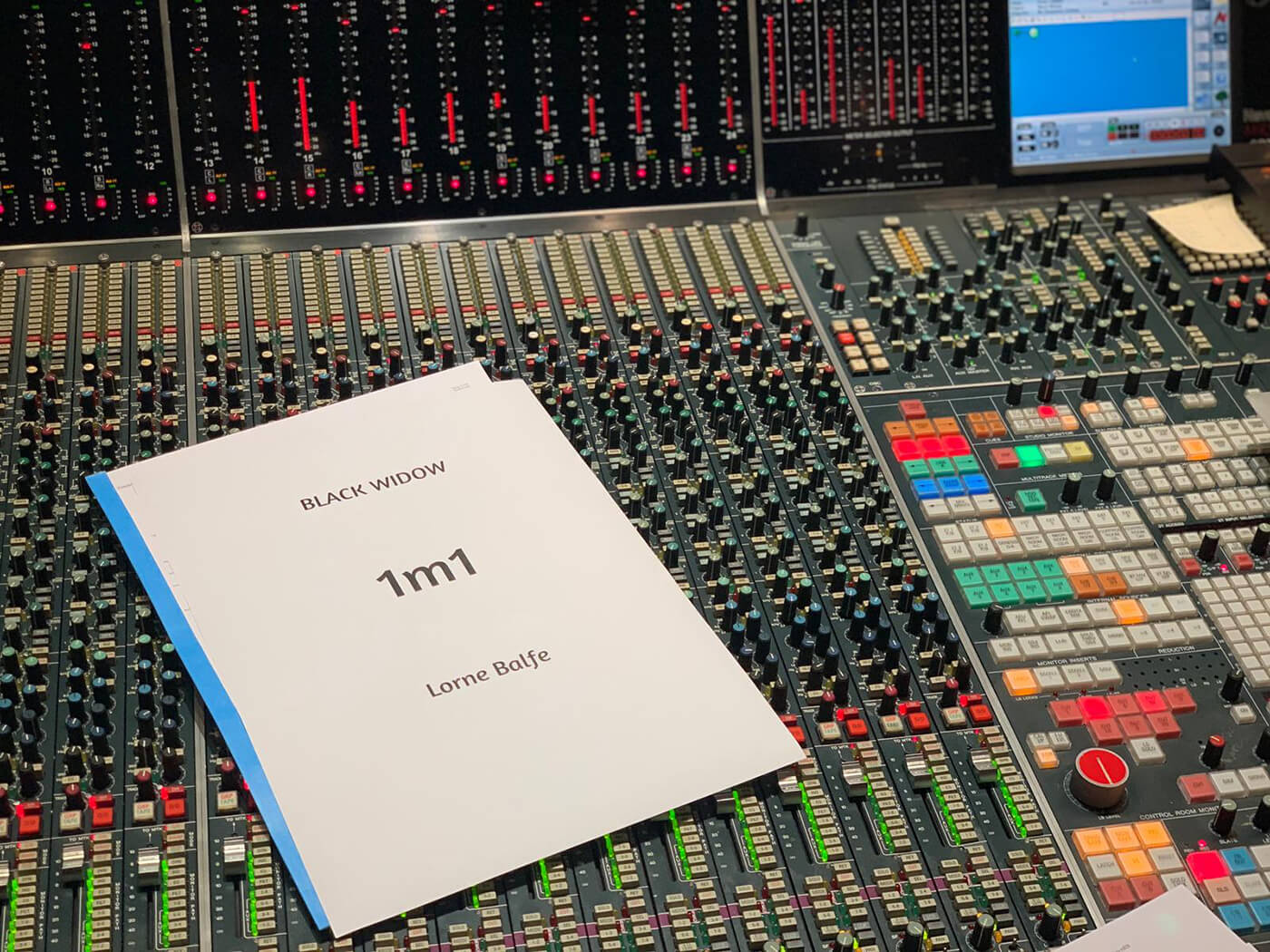 That blueprint, characterised by in-your-face rhythmic patterns, brassy roars, and the use of non-musical sounds, left an undeniable impression on Balfe’s musical style. Working alongside Zimmer, he contributed music to iconic scores such as the Dark Knight Trilogy and Inception before taking the reins as composer for titles such as Mission Impossible: Fallout, Call Of Duty: Modern Warfare 2, and The Lego Batman Movie.

“He’s not only an amazing composer,” he says about Zimmer. “He’s a pioneer when it comes to technology and pushing musical boundaries with technology. He reinvented the concept of film music and how we write film music. Working for him was better than any film college or university – and it wasn’t necessarily about music. It was about storytelling.”

More so than any scoring technique or musical texture, Zimmer’s influence is most felt in how Balfe aims to integrate his music with a film’s story. The belief that narrative is a composer’s guiding light comes up frequently in our discussion, and especially as the topic turns to his score for Black Widow.

“The action wasn’t the primary discussion. It was the storytelling – it was more about their relationship as a family.”

The film follows the iconic Avenger, her sister Yelena Belova, and their parents as they manoeuvre around the Soviet military forces that pulled them apart. Building on these themes, Balfe’s score is heavily influenced by Russian classical and folk music. The composer immersed himself in Prokofiev, Stravinsky, Borodin, and the Red Army Choir – the military ensemble known as the Kremlin’s ‘singing weapon’ that defined the Cold War sound of the USSR.

For Natasha, the composer penned a musical theme in the style of traditional Russian lullabies – pairing a solo female voice with acoustic guitar before shifting seamlessly to the imposing sound of an all-male choir. Played during the film’s opening sequence, it’s a beautiful musical turn that captures the conflicting forces driving the character of Black Widow.

When it comes to scoring cues, Balfe regularly relies on storyboards and graphic art to ground him in the world of the film – a practice that came in handy working on Black Widow, as the composer was able to draw from the rich visual history of the original comics for inspiration.

“You’ve got to immerse yourself in the world as much as possible,” he says. “Because you want to be as loyal as possible to the audience. They are the people that you make these films for, so you need to do your research and study and go into the world of these characters and everything they represent.”

Directed by Australian filmmaker Cate Shortland, Black Widow is the first MCU title to be directed solely by a woman and, despite its breakneck pace, roaring action scenes, and brutal hand-to-hand combat, the story makes time for moments of quiet humanity that feel a long way away from the galactic exploits of Thor and Thanos. Ultimately, the film paints a picture of a superhero who’s a bit more grounded.

“The action wasn’t the primary discussion,” he says of his early conversations with Shortland. “It was the storytelling, and it was more about their relationship as a family.”

Nevertheless, Black Widow is a Marvel movie, and when the action kicks in, it does so on a truly grand scale – with music to match.

Balfe put together a dense and detailed score, requiring a 116-piece orchestra and breaking the record for the largest orchestral recording ever undertaken at Abbey Road Studios. On top of that, there was a 40-piece men’s choir and a 20-piece women’s choir that added to a sonic texture that could match even the most extravagant visuals.

“That’s what the picture was calling for,” he quips when asked what prompted such a gigantic recording session. “It was just great timing. We were very fortunate that, on the days that we wanted to do those line-ups, the best musicians were there. It wasn’t about numbers. It was about having the best team possible.”

It’s hard to argue with the results. Each section of the orchestra sounds gargantuan – whirling string runs, soaring brass and driving percussion add even more adrenaline to the over-the-top spectacle we see on screen. At the same time, the male choir conjures up foreboding images of an implacable Cold War enemy.

“The 40-piece men’s choir was an amazing sound,” he says. “The female choir, I’d split so that [out of 20 singers] 10 were a gospel choir, and the other 10 was a more conventional classical choir. This was just so we could change the sound to give it a more contemporary feel at certain moments.”

Those deft shifts between male choir, female choir and orchestra are exemplified by Arise, which plays near the film’s climax, as Natasha is surrounded and nearly overwhelmed by a group of enemy spies controlled by sadistic villain Draykov, played by Ray Winstone.

Paying attention to those seemingly small but hugely important details is key to Balfe’s approach to scoring and arranging. He’s acutely aware of the musical depth that comes with choosing the right texture, the right technique and the right performer for the project.

“Choosing all the soloists is like casting your film,” he says. “There was a musician named Kimmy Lawrence who beatboxed on the score. I didn’t want to use conventional beatboxing, but I wanted to get breath and air into the percussive parts. So, I got her to replicate what the drums were doing in her style and then layered it with all the natural percussion and electronic percussion, so you’re not necessarily aware that you’re listening to a beatboxer.”

“Choosing all the soloists is like casting your film”

That pairing of electronics and orchestra has become a hallmark of Balfe’s scores. His music has innumerable electronic flourishes woven through instrumental textures. He’s also not afraid to put synths and manipulated sounds front and centre in the mix as with his score for just-released Amazon original sci-fi, The Tomorrow War.

“To me, [synths and electronic sounds] can be another member of the orchestra,” he says. “It’s another colour that can be created. If you look back at the films in the 80s, with Jerry Goldsmith, there were recording sessions with orchestras where they used to have the actual synth parts performed by musicians, in the session with the orchestra.”

Whether it’s an evolving electronic drone or a large orchestral cue, Balfe’s early affinity for the technology of music remains undiminished – and he’s certainly not a ‘pen and paper’ composer.

“25 years ago, directors were played the music on a piano and told ‘it will sound like this’”

“Cubase is my instrument,” he laughs when asked about his working process. “I used to be a Logic user, and then I saw the light. I changed to Cubase when I saw that Steinberg really wanted to help composers that work in media. I’m running everything internally now. Even picture is now in Cubase. It’s just becoming so streamlined.”

With a career of over 20 years in screen and game composing, he’s seen just how far virtual instrument libraries have come. However, in his view, while those libraries might have revolutionised the way composers sketch out and demo ideas that can be shared with a director, there will always be a need for large-scale recordings like the kind he undertook for Black Widow. 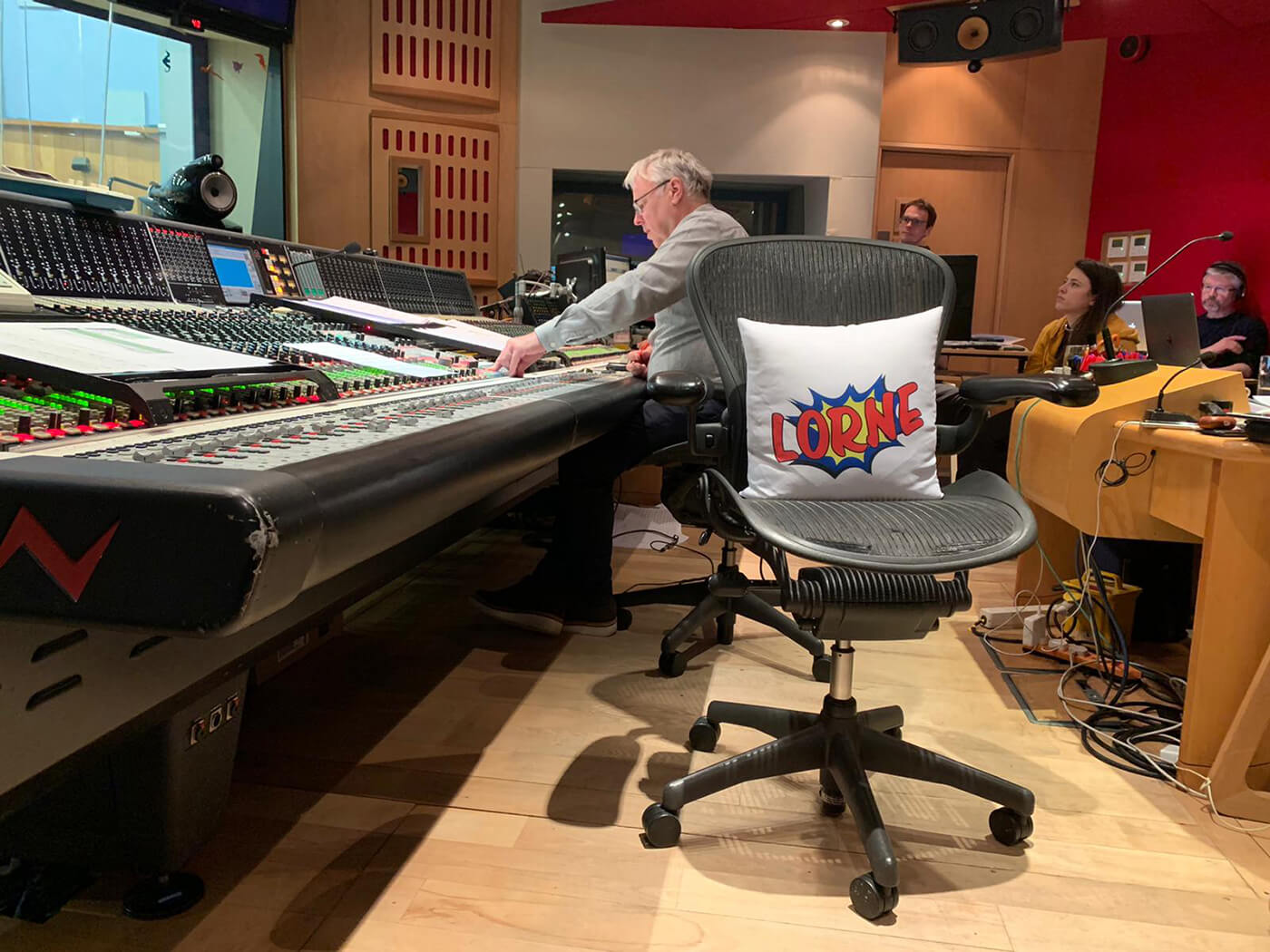 “25 years ago, directors never heard the music that was going into their films,” he says. “They were played it on a piano and were told ‘it will sound like this’, and they wouldn’t hear it until it was actually recorded with a live orchestra. Now the technology has gotten so great that even I sometimes can’t tell the difference between samples and the real thing. It may trick the ear briefly but, when compared to a live orchestra, there’s just no comparison.”

Marvel Studios’ Black Widow is in theatres and on Disney+ Premium Access now. Keep up with Lorne’s latest projects at lornebalfe.com.