Aziya on building an audience from her bedroom, impressing Grimes and releasing debut EP, We Speak of Tides

Fast-rising self-producing star Aziya tells us how virtual cover versions helped her find an audience during the lockdown and how simplicity in the studio has shaped her sound. 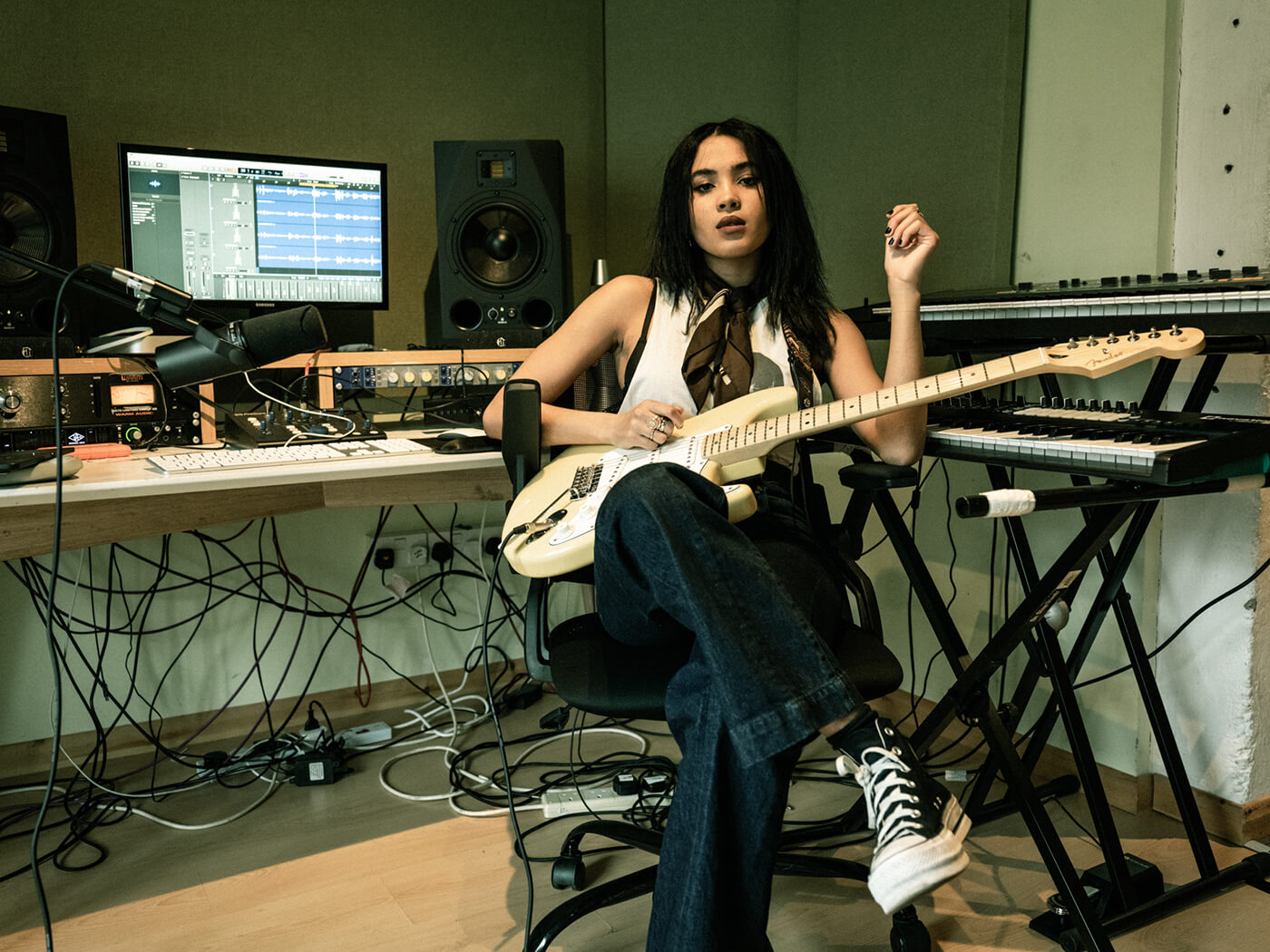 “Growing up, I never really saw anyone who looked like me playing the guitar. It meant I really wanted to set the tone for what came next.”

Aziya is an East London-based artist, producer and multi-instrumentalist with brave intentions of changing the music industry’s narrative. Her vision is unsurprisingly bold for a new talent whose Spotify bio’s ambitions include wanting to create songs for “Debbie Harry to sing, Prince to co-produce and John Bonham to drum on”.

Over the last 18 months, Aziya has been evolving her guitar-heavy songs and on-point productions to find an ever-increasing number of ears. The mix of emotion and hard-hitting riffs she pours into tracks such as debut single Slip! and the anthemic Blood have proved hard to resist, despite the wider industry finding itself in a precarious position after the pandemic effectively cancelled live music. Aziya was due to perform at Brixton’s legendary Windmill venue when restrictions led to the curtain coming down. But via a series of inspired covers of favourites by the likes of H.E.R and Grimes, she’s built up a steady head of steam topped off by the recent release of debut EP, We Speak of Tides.

“I think lockdown has really helped me find an audience,” she says of the last year and a half without live music. “I was hoping to gig a shit tonne before Covid. Then restrictions kicked in. But that sudden loss of something made me work even harder to gain a fan base.”

Aziya’s creative diligence runs alongside a passion for eclecticism, traits fostered by exposure to a varied soundtrack in her childhood home.

“I grew up in a musical household and was exposed to many different genres – everything from Patti Smith and Tame Impala to System of Down,” she remembers.

“It was a real melting pot and intrigued me enough to make me want to explore this by picking up the guitar, starting lessons and trying to express myself in my music.”

From these beginnings, Aziya began to find her creative feet, playing with different performers and enjoying a series of breakthrough moments as new doors of musical perception opened.

“I always wanted to imitate the artists I heard when I was growing up and was constantly humming snippets of songs and melodies,” she says of the motivations pushing her forward.

“But then a turning point came when I was able to play with a band and offer them a clear vision of my songs – watching these other musicians respond, engage and get into what I created was really important.”

“I was hoping to gig a shit tonne before Covid. Then restrictions kicked in. But that sudden loss of something made me work even harder to gain a fan base.”

Aziya’s experiences with music at school and college helped prepare her for the wider industry. In these spaces, she began experimenting with production to bring to life the songs she was dreaming up.

“I could hear other instrumentation in my ideas and had this real urge to show people my whole songs. I’d continually question what I was doing and how to do it,” she states of her process.

“I totally fell in love with guitar music again,” she says of her time there. “It was always there, but studying reignited my passion, and I ended up down these rabbit holes of discovery with bands like Led Zeppelin and psych-rockers Tame Impala.”

Aziya’s first forays into releasing music came in 2021 after a series of social media cover versions helped her set out her stall. Sessions reinterpreting classics from Grimes, Nirvana and Kate Bush have not only helped prep audiences for her original material. They have also given an insight into the inspirations getting her creative juices flowing.

“When lockdown happened, my focus was on engaging with people even though I didn’t have any of my own music out,” she says.

“So I started releasing covers of tracks by Grimes and Tame Impala. People gravitated towards them as these performances really showed the kinds of artists I love and am inspired by.”

While Grimes and Tame Impala gave their seal of approval to these new renditions, H.E.R went one step further and invited Aziya to perform on her live stream alongside the likes of Shawn Mendes and Missy Elliott, even though she’d yet to release any of her own music.

Her debut EP We Speak in Tides landed on 2 July, at an appropriate time with listeners primed for more. Its five songs display a breadth of hues ranging from experimental and psychedelic to heavier, more speaker-rattling moments. Lyrically, the songs explore the connections we form with each other as warm-blooded humans – a theme Aziya is obsessed by.

“I love writing about the dynamics between people,” she says. “I wanted to compare the push and pull of these relationships with a force as vivid as the ocean’s tide. Throughout the EP, I’m exploring and analysing the different connections we forge and the intricacies of awkward conversations and situations.”

There’s enormous vitality to Aziya sound, and her creative process fuels this, pinpointing melodies first, then adding other elements.

“With Slip! it was all about finding that melody, and it just came on the way to the studio. As soon as I got there, I had to get it down. Once I had the lyrics and the melody, then I could look at the production and start building it into what it is today sonically. For me, it’s so important for people to be able to sing back the chorus and for it to have a memorable hook.”

Aziya’s collaborators include mixing engineer Barny Barnicott on Slip! and Marathon and main collaborator Josef Page on the other tracks. They’ve helped her ensure she retains the initial sparks of energy when she’s recording and writing. Aziya aims to work instinctively rather than being too precious early on in the process.

“Even if it’s the shittest lyric, I’ll still write it down and grab the melody, then go back and refine it and reassess what I’m trying to say. But with vocal takes, the best are usually those first ones; they’re the performances with the most emotion and intensity.”

“I could hear other instrumentation in my ideas and had this real urge to show people my whole songs. I’d continually question what I was doing and how to do it.”

Aziya’s production process begins by recording in a domestic setup. Here she comes up with most of her ideas and song structures before taking them to a professional studio for a mix and polish.

“Like most new independent artists with no budget, it was a combination of borrowed spaces and bedrooms,” she explains on the recording. “I did a lot of the initial production at home and then developed this further in the writing rooms of the collaborators I’ve worked with. I’ve been doing some recording now at Konk Studios which is an amazing space and has given me so much inspiration.”

She uses Ableton to sketch out her ideas and a pair of Yamaha NS-10s for monitoring. Unsurprisingly, Aziya also has a collection of guitars that she switches between.

“My Fender Jazz Bass and Tele are my favourites and my go-to’s in the studio, depending on what I’m trying to achieve,” she states. “For live, my Tele is my favourite, it’s so versatile, and the tone is always amazing.”

While it is a bedroom recording situation, Aziya enjoys the creative restrictions this imposes, meaning she can focus on getting the most out of her songs and streamlining how she works.

“The moment I start thinking ‘if only I had this or if only I had that’, then it would start impacting my creativity. It enables me to work out what sounds will go where in my songs and helps me push myself.”

Beyond her trusted guitars, a few go-to plug-ins help solidify her sound. “There are so many great ones I rely on. I love the Soundtoys Decapitator and Echoboy as well as the TAL-U-No-LX,” she says.

“If you have limitations, don’t let it stop you or deter you from continuing with your musical experiments or process. These help you to be more creative and inspire you to think outside the box.”

Simplicity is indeed a guiding principle for Aziya and something she sees as a strength rather than a weakness. She believes that musicians and producers at the start of their careers should embrace it, not view it as restrictive.

“If you have limitations, don’t let it stop you or deter you from continuing with your musical experiments or process,” Aziya explains. “These help you to be more creative, to help you think outside the box. There are so many ways to think around them these days – get on YouTube and learn as much as possible.”

This goes especially for female producers, musicians and engineers – who have long made important contributions to music through history, Aziya notes.

“Prince’s engineer Susan Rogers was female, and there have always been women in these roles, who have been successful in these male-dominated spaces, who have not been championed or spoken about,” she points out. “I don’t think it’s become more equal, but it’s been addressed and appreciated – there’s more ability to discover that there are some brilliant female producers out there.”

Following the success of her debut live gig at Paper Dress Vintage in Hackney last week, Aziya is now preparing for a host of new projects, including more live outings, alongside doing her best to bring her audiences together.

“Now that live music is coming back, I think it will solidify the fan base I’ve created. I’ve done one gig – and it felt really special to connect with those people who I’ve picked up online.”

Find out more about Aziya here. Watch the video to her track Slip! here.