In this part of our Q&A series, engineer John Barrett recalls the recording sessions for Marvel Studios’ blockbuster finale. 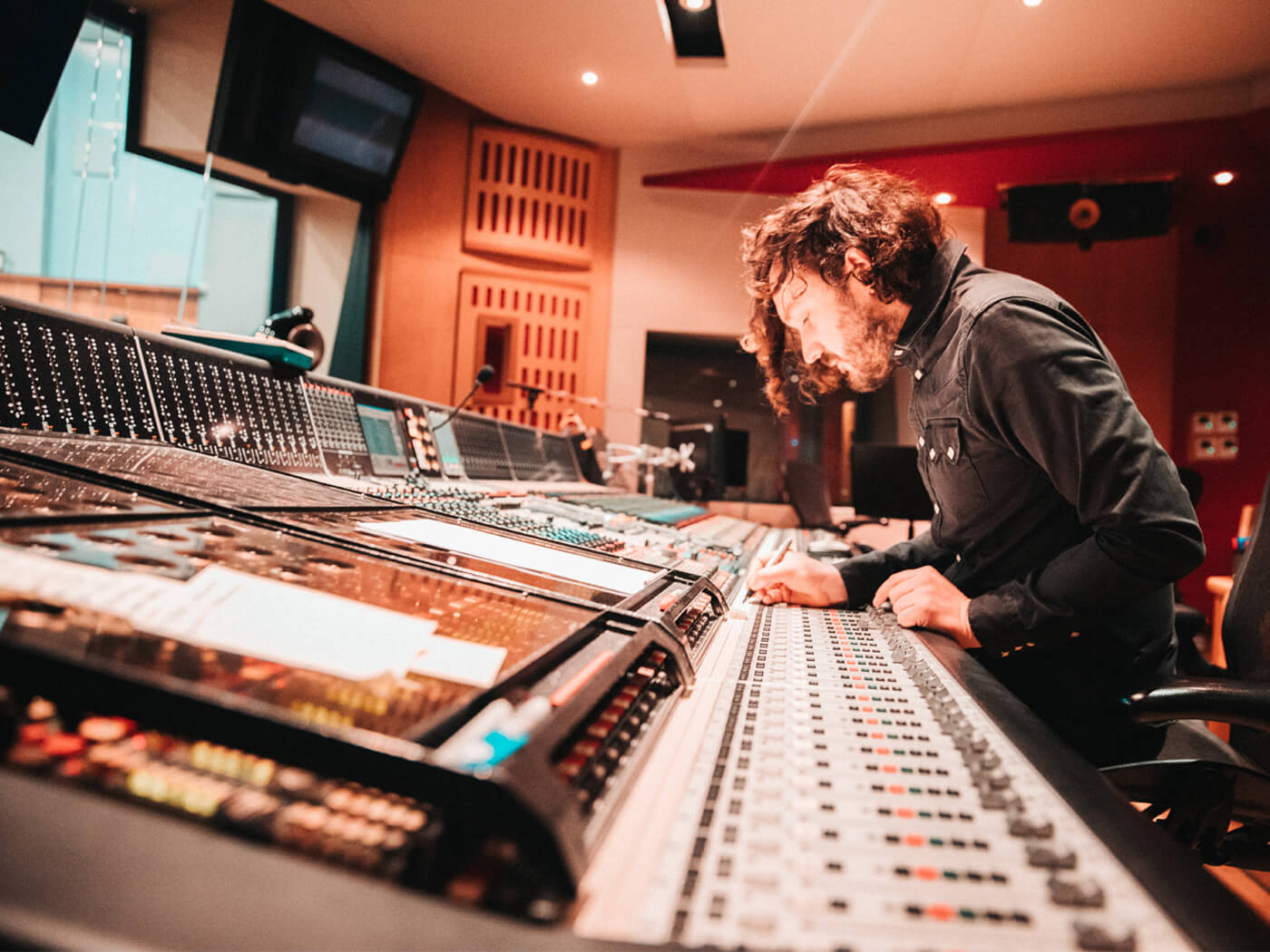 The third recording professional to take your questions in our Ask Abbey Road feature is John Barrett, one of the studio’s newly promoted, and up-coming audio engineers. John has 14 years of experience at the iconic facility, rapidly rising the ranks, from tea boy to assistant engineer to score recordist, and recently, to engineer.

The lion’s share of John work at the studio is orchestral recording and his recent credits include score recordist for Avengers: Endgame, score mixer for Jonny Greenwood’s Oscar-nominated Phantom Thread score, and recording the score for Steven Price’s Our Planet.

Have a burning question about recording? Ask Recordist Matt Jones in our next open Q&A. We’re taking your questions now until 12 August 2019.

Steph: In the future, do you think recording studios will become obsolete due to the increasing sophistication of virtual instruments for orchestral pieces?

John Barrett: It is true that all of these sample libraries and modelling that people are doing, including AI stuff, it’s getting more realistic. However, the most important thing is what proper musicians bring to the table. There’s real magic in the room when you get 100 musicians that are playing and the air is moving. People respond to each other and interpret the music, especially dynamics. At the moment, I don’t think you can get that from virtual instruments. Of course, you can sit down and play with velocities and tweak stuff, but the real thing is phenomenal. So I sincerely hope that we don’t lose that because it’s so enjoyable.

Certain things work well as sampled instruments and we often use those out of necessity, because of time or budget, or maybe there’s a specific sound that the director has fallen in love with. Many film scores use percussion samples and lower-budget projects include more than that. But it’s incredible how adding real musicians on top can bring things to life. It almost hides the fact that you’ve got elements that aren’t real.

You can go to the other extreme and do everything live – that’s always exciting. I was the recordist running Pro Tools on the soundtrack for Avengers: Endgame and it was just incredible that we ended up doing most of it live with the whole orchestra in the room. This approach is almost unheard of in film scoring. Most of the time, you’d end up stemming things out for editing or balance reasons, but there was a real commitment to capturing that live, Hollywood big-orchestral sound in the room. There are some scores where you can’t do that.

MT: What are the advantages of recording the whole orchestra live in the room?

JB: As much as anything, it’s a lot more fun for everyone involved. Doing it all live means there’s extra buzz and energy and everyone raises their game a bit, especially if the music is difficult. It’s exciting to be a part of that.

When you’re recording everyone together, you can also record a lot of minutes of music in much less time. Whereas if you start splitting things out, then you end up doubling or trebling the amount of time you’re recording. Sometimes, as well, when you start splitting things out, you begin to hear things you wouldn’t necessarily have heard, so you start obsessing about hearing noises or an intonation that was a bit funny, for example. When you listen to an overall blend, you wouldn’t immediately hear these things as being issues because it just sounds like a big orchestra playing together.

That’s the joy of an orchestra; that it’s a blend of real instruments and people. The downbeat isn’t always on the one, it’s sometimes wider; the tuning isn’t always perfect, either, but that’s how an orchestra sounds.

JB: I think there are lots of factors for why people choose to come to Abbey Road, especially with those kinds of projects. Firstly, we’ve got an incredible technical department who provide first-class support. So part of those recording sessions is doing a Source Connect or an ISDN. People will be listening over in LA while we’re recording, so we’ve got a system down where they can listen in and they can see us. Having all those technical elements covered is fantastic.

I’d also like to think it’s because, at Abbey Road, we’ve got a very experienced team of people, from the runners up to the engineers, who know the rooms inside out and know how to solve potential problems. Hopefully, that means clients want to come back because they’re in a safe pair of hands.

“People will be listening over in LA while we’re recording”

The sound of the room is fundamentally important, too. You’ve got other great recording studios in London and their acoustics lend themselves to different things to ours. It’s a happy union – we’re in a position where certain things work better there and other things work better here.

The other reason that these clients come over from the States to record here is the musicians. We’ve got such an incredible bunch of experienced musicians here – some of the best in the world. We’re fortunate that we’ve got this facility and all these people. There’s a whole community of people who do this. I’d also like to think it’s because we’re all pretty professional at what we do.

Steph: What are the biggest challenges associated with recording a large number of musicians at the same time? For instance for the Avengers: Endgame soundtrack.

JB: It’s all about preparation. It costs so much money to have that many musicians there, everything needs to be ready to go, and it needs to work. That’s a big challenge to make sure that you prepare for all eventualities.

Then you’ve got the practicalities of getting enough microphones working and getting a balance. The real challenge is making sure the balance in the room is correct.

“Getting the foldback working can be a real headache”

That’s slightly challenging sometimes because, with film stuff, the brass usually has to sound brassy and big. You can’t get them to balance. It wouldn’t ever work, or you need twice as many strings – and there’s not the space for it. You physically can’t fit them in.

That’s when you’d have to go down the route of split recording. Also, you might end up recording sections separately for editorial reasons. So, further down the line when the picture edit has changed, you can edit the music more flexibly than if everyone was playing together.

Another real practical point when you’re recording a large number of players is foldback. Whether you’re recording a band or a 12-piece ensemble, getting the foldback working can be a real headache. If you can have that pre-planned and tested before you start, so you know which faders correspond to which instruments, that’s an excellent starting point. Otherwise, you can lose hours with people saying “I can’t hear this or I can’t hear that”.

When you’re recording lots of people at once, it’s all about those general preparation points of getting everything ready so that you can get on and enjoy the fun bit of balancing things, getting performances and getting sounds up.

Lucas: What are the unique challenges and differences between orchestral recording and pop recording and do you prefer one over the other?

JB: That’s one of the great things about working at Abbey Road – every day is so different. I had a week where I started in Studio Three doing Chinese hip-hop, recorded a reggae band, then did a string quartet in Studio Two followed by a big film score in Studio One.

You get the opportunity to work on so many different things, and the great thing is, from doing that, you can take specific techniques from one discipline into another. For example, recording an orchestra is about being prepared and having a workflow where you’re quick.

If you can then impart that knowledge into a pop recording, it means you can get things going fast and record quickly. I think that sort of approach is beneficial because people in the studio hate waiting around. You really don’t want the whole band to turn up, and you’re still there EQing a bass drum for an hour.

On the flip side of that, with pop, you’re more likely to experiment and try different things, and you can always transpose that into the orchestral side. You could mic things differently and try different approaches. There are various challenges, but there are lots of things that are very similar, though you might not necessarily think it from the outset.

Ultimately, one of the most difficult things is making sure that you’re communicating with the musicians well. With an orchestra, that can sometimes feel a little overwhelming if you’re talking to 100 people. It’s easier when you’re talking to a smaller band, but necessarily everyone’s there to do the same thing – everyone wants the best result. So, generally, people are on-side.

Have a burning question about recording? Ask Recordist Matt Jones in our next open Q&A. Get yours in by 12 August 2019.