A Greek classically trained singer runs vocals through modulation plugins to achieve an unnerving, yet warm and intimate listening experience.

Aphty Khéa is a Greek singer, multi-instrumentalist and electronic producer. Throughout the making of their latest EP, Salt & Copper, while travelling between London, Granada and Berlin, the artist experienced many “transformations and emotions”, and has poured all of it into the intimate, deeply honest 5-tracker.

A blend of eerie ambient electronica and cutting-edge indie dance music, Salt & Copper is a pivotal release for Aphty Khéa. They tell MusicTech about how throwing vocals through effects plugins, collaborating with fiddle players, and a fondness for Soundtoys plugins resulted in the sonically stirring sounds on this defining release.

Hi Aphty Khéa. The EP has “gone through many transformations and emotions during the four years in which they took to make it between London, Granada and Berlin”. Why?

A lot of things can happen in the space of four years. I was slowly going through multiple life changes, some without realising at the time, and I mostly came to fully grasp the impact of those experiences in the last stages of the EP’s creation. I was moving around a lot, mostly between London, Athens and Berlin, amongst other places, and then, of course, lockdown happened.

That had a big impact on my mental health and facilitated one of the bigger life changes I went through at the time: gender identity (non-binary/genderfluid). I think a lot of people were faced with themselves during lockdown; confronted with matters they might have been avoiding or had no time to ever unpack. I found that a lot of music that was created during this period embodied an extra amount of introspection and depth. 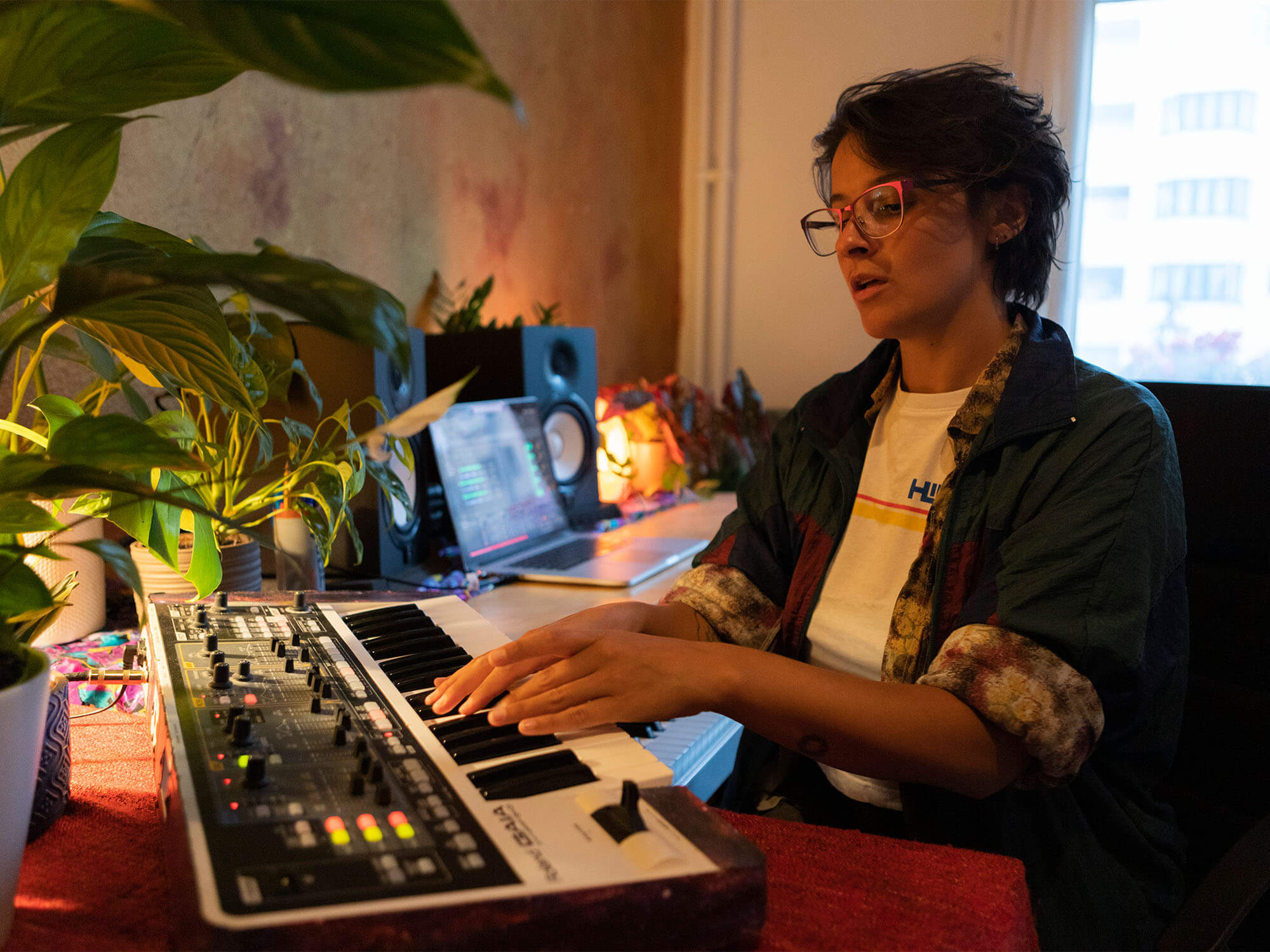 Can you tell me about the organic instruments used in this release?

The organic elements on my end were my vocals throughout the EP, sometimes electric piano and Roland SH-01 Gaia synth, then for certain tracks fiddle by James Patrick Gavin, bass guitar by Max Mella from a.Blubox, electric guitar by Alessandro La Barbera from a.Blubox, and occasional backing vocals by my sister, Jeana Boleti.

I tend to run individual tracks or groups through the same plugin more than once and do a lot of reprocessing. I like to reverse audio, stretch it, pitch it and put it through a few different plugins to make It into something else. I do this a lot with my piano, especially when I want to start something new. I just mess around and record myself for 45 mins or so, then listen back, select a few clips and go through that process. That’s how the main pad of Salt & Copper came to be, for instance, and the ‘synthy’ sounds you can hear in the breakdown section of Company. Sometimes I like to keep the organic elements pretty raw and straightforward, and other times I want to take them completely out of context and give them a “sci-fi” feel, depending on how I’m feeling and where the track seems to be taking me.

Sometimes I will use the organic recording and enhance it with plugins, like I did with the fiddle in Salt & Copper, for example. I made many duplicates, pitched them to create harmonies (when you pitch down a fiddle it kind of gives it a viola sound), reverb and/or delays, and then some sweet software instruments playing the same lines, harmonies or counter melodies.

Your singing is enchanting. Have you always sung?

I have indeed been singing since I was a child. I have a teacher’s diploma in classical singing and have been teaching and coaching people as a vocal tutor doing one-to-one lessons privately, in music schools and in after-school clubs for almost ten years; but now I focus on private tuition. I joined my hometown’s local children’s choir in Greece at the age of 6, and studied classical singing for 8 years starting at the age of 10. At that same age I participated in the Junior Eurovision Song Contest 3 times, coming second in Greece in 2003 (10) and 2004 (11), then came first in 2006 (13) and went to the finals in Romania. Before my BA degree in songwriting, I completed a one year Higher Diploma in contemporary vocal performance at ICMP in London, which really aided in honing my vocal tone.

My latest purchase was Portal by Output, which is a granular effects plugin. You can create cool-sounding percussion or sci-fi sounding effects. If you figure out the right parameters and run the right sound/sample through it, then you can come up with some edgy sounds. I’m never quite sure how it’s going to warp the sound I put through, and it’s exciting when it turns it into something really cool and different. I’m pretty satisfied with it and am using it more and more.

That has to be BBC Symphony Orchestra by Spitfire Audio. Beyond the live fiddle in Salt & Copper, this plugin is what provided the rest of the orchestral sounds in the track. It’s my go-to for symphonic arrangements, and I really, really enjoy it.

My best-value plugin is going to have to be the Soundtoys collection. I waited for sales and bought the complete pack at a 50% discount, and I honestly use at least 4/5ths of the plugins almost constantly. It was also one of the tools that helped me get better at production and helped me embellish my arrangements in ways I thought I wouldn’t be able to, so it really was a game changer in my production journey.

I generally don’t master my own tracks if I can afford not to. Sometimes I add a limiter to the Master when I am still bouncing the track in the creation process still, so it can be loud enough when I listen to the demo on different sound systems. But the very few times I do master for real my own tracks (something I am not super comfortable with) I use L2 and OneKnob (Brighter) by Waves, Ableton EQ and – maybe – Radiator by Soundtoys. Don’t judge me.

What plugin would the Salt & Copper EP be incomplete without?

A few… but if I had to say one that would be Little AlterBoy for every single vocal arrangement (and pretty much most of the Soundtoys collection).

In Salt & Copper, you do an excellent job of layering your vocals. At what point did vocals come into the track and how do you arrange/process them?

I had the main loop and then the melody came to me. I usually come up with a vocal melody once I build a loop I find inspiring enough. It sets the vibe and it’s easier for me to come up with new melodies. I enjoy building harmonies and various vocal ensembles, and the call-and-response backing vocals in this track were inspired by the vocal arrangements in VEDA BLACK’s Sad Girls Club EP. Processing-wise, I pretty much always use Little AlterBoy and soothe by oeksound, and of course EQ 8 (Ableton) harmoniser presets in Crystallizer, and sometimes EchoBoy or a second Crystallizer for more intense effects (more and more Soundtoys).

What microphone do you use?

When I record in my setup, then it’s the same microphone I’ve had since I was a young teenager: Rode K2 condenser mic. It continues to function perfectly after almost fifteen years, and I find it reliable and crisp.

The tracks each reflect a theme of raw intimacy. How have you achieved this feeling of intimacy?

Honestly, it’s usually because I am too shy that my neighbours or housemates will hear me, especially when it’s the middle of the night, so I’m always whispering sweet nothings into my mic. That’s how so many of my melodies end up embodying intimacy, despite the fact that I am trained to sing in a far more technically grandiose manner.

Not sure it’s much of a secret, but I use Ableton EQ Eight on everything, and beyond that I use PanMan (yes, Soundtoys again) very, very frequently on both instrumental elements and vocals. It has interesting but standard patterns and movement, which is something I always enjoy in tracks (when it’s appropriate arrangement-wise). It adds depth and keeps things flowing.

As mentioned before, OneKnob Brighter and Endless Smile by Dada Life. I kinda like using Endless Smile as a sizzled reverb; and OneKnob just gets the job done.