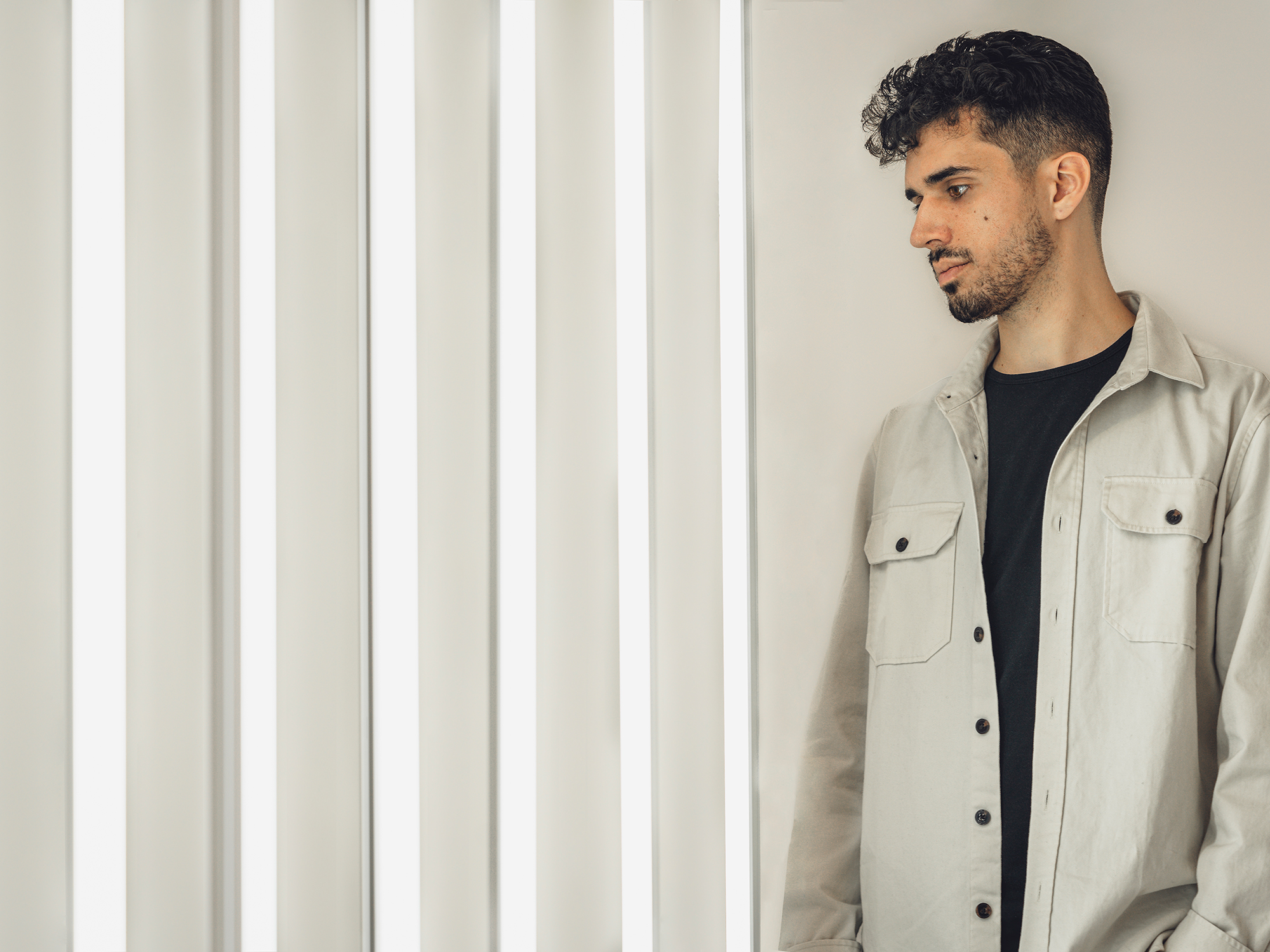 Montreal-based producer Anomalie touches myriad bases with his music. We catch up with him to hear how lockdown inspired the shape-shifting funk of his new record.

Instead of touring in 2020, producer Anomalie – real name Nicolas Dupuis – was forced to stay at home in Montreal, unable to write and record due to the close proximity of his neighbours.

It led to Nicolas and his girlfriend moving out and finding a new place in the city where he could be as loud as he liked. The result of this upheaval is his debut album, Galerie.

“The story of this record is me getting excited to make music again,” he tells MusicTech. “Over three or four months, I built this custom studio in my basement, a space where I was finally able to make as much noise as I wanted and record my upright piano.”

The instrument takes centre stage on a record that combines jazz, hip-hop and the neo-soul stylings of the likes of Robert Glasper and Herbie Hancock. Nicolas raids different genres and brings them together to unlock captivating, contemporary-sounding takes on his heroes’ sounds. While previous Anomalie EPs were inspired by his home city, Galerie connects his past to a new musical future.

“I hadn’t had access to a real piano since I was a teenager, so that on its own was pretty surreal,” he says, with a laugh. “I got a drum kit, treated the room as best I could, and got a few synths into the space. The environment I recorded in is one of the main characters of the album.”

Nicolas’s early years were spent in Montreal. He was brought up in a musical family – his mum a piano teacher, and dad a radio host. His introduction to playing an instrument came via the piano and taking lessons from the age of seven. Nicolas then began exploring songwriting and production using a laptop and Garageband at high school. These informal experimentations were strengthened by studying jazz performance while continually expanding and refreshing his record collection.

“What led to Anomalie was a mix of all the influences I’ve been exposed to over the years,” he explains. “So classical as a kid, jazz in school, then hip-hop later on. I was part of a live instrumental hip-hop band where we would play in weekly sessions. This would partly be an open jam, then we’d also play repertoire from 1990s hip-hop but translated into a live band setting.”

It’s this patchwork of inspirations that underpins the shape of the Anomalie project. It’s a richly diverse musical identity that Nicolas feels is indicative of a world where we can access music from anywhere and any period of time.

“Most music we’re exposed to today is in some ways a hybrid,” he says of his sound. “We hear so many different genres, I think it’s a really exciting time. If you just go through the Billboard 100, then everything is a combination of different influences in some way due to how much music there is competing for our attention.”

As an artist, Anomalie’s first releases, EPs Metropole and Metropole II, were tributes to his native Montreal. It’s one of the biggest French-speaking cities in the world, stacked with cultural inspirations and performance opportunities for musicians.

“As I’ve grown up here, the music I make comes from a combination of experiences I’ve had,” Nicolas says. “The cultural setting in terms of what I had access to, the music scene and the nightlife and all of that played a big part in defining my sound.”

Other key influences on his musical life include his peers, artists such as Bad Snacks and Canadian duo Tennyson, and the greats such as Quincy Jones and J Dilla. All mix a free-form approach with energy and their own distinct sonic character.

“My all-time hero is Quincy as a producer but he’s also my hero in terms of arranging and orchestrating,” says Nicolas. “J Dilla’s influence is huge, too, I wouldn’t be producing in the way I do if it wasn’t for him.”

Nicolas always fostered ambitions to create a debut album but suddenly found the time when live tours were pulled due to the pandemic. Initially held back by his domestic circumstances, moving meant he was able to build his own studio in his new home. The music of Galerie is a celebration of this new freedom to make as much noise as he liked.

“Moving made it easier,” he says. “This record is not really about me showing off my virtuosity. This was a quest to reconnect with the piano specifically and having a space to experiment. I was at a stage where I felt stuck and it opened up a new world of possibilities.”

Nicolas’s setup for the recording sessions was a simple one, defined by what he could move down the stairs and into the basement studio he’d created. Rather than seeking out expensive equipment, he chose what gave him the most flexibility both in terms of the space it occupied and the way it might aid his creativity.

“I’ve been working in Ableton Live for a few years now,” he says. “It’s been my go-to DAW, as I can transfer my projects to a live setting pretty easily. For this album, I had two small Rødes for mic’ing my piano, which I moved around the instrument depending on the sound I was looking for. It was pretty minimal.”

From the beat-driven Dribble to lead single Bond, many of the tracks on the record were born from rapid bursts of inspiration. Nicolas prefered to quickly capture these ideas before returning to finesse the arrangements..

“Whenever I start, I try to capture the initial excitement and focus when I’m in that special creative zone,” he says. “Most of the ideas will usually happen in a short amount of time, then I’ll come back for the arrangement, which can take anywhere between a day to two months. My process varies tremendously.”

The album is littered with collaborations but his track Memory Leaves with vocalist Masego is exciting. Nicolas views the record as a body of work but the collaborative aspect added an extra dimension.

“Every collaboration on the record is great as it’s the first time other artists have brought something to the Anomalie project,” he says. “They were all inspiring but this was great as it happened in person and I’ve very fond memories of that session.”

As a music maker, Nicolas chooses to focus on playing at the piano and working on melodies rather than capturing anything as a voice memo and developing from there. Although his songwriting methods are very much an ongoing work in progress.

“Most of my ideas will come from forcing myself to sit down and start something,” he says. “I might prepare a few sounds in an Ableton session, usually starting with drums, then begin layering. Finishing music has always been a challenge for me as I do my own mixes and masters too. It can be tricky to create a sense of distance between myself and the work.”

Now that the album is out, Nicolas is gearing up to head beyond his studio and take on an extensive tour of North America and Europe with dates throughout the year. His live outfit consists of a four-piece band, whose members have worked closely together in the past as part of the hip-hop jam sessions Le Cypher.

“We’ve worked together on several projects before,” he explains. “The live show will be faithful to the original arrangements but each player can bring their own personality into it and there are moments when each has real chances to express themselves.”

When it comes to creative advice, Nicolas is keen to outline how less is more in his process. Instead of getting distracted by shiny plug-ins or synths, he emphasises the importance of mastering a few pieces of gear at a time.

“It’s easy to get carried away but my advice is to focus on a small number of tools,” he says. “Once you’ve completely explored what you can do with those, then you can start to add to what you’re doing.”

Using just a few effects or samples can help inspire creativity. Then once you’ve mastered these tools, you can begin to expand your palette and incorporate more.

“I feel like this is a much better way of developing your craft than being thrown into a context of 50 options,” Nicolas says, with a laugh. “Rules and limitations can force you to be creative and you usually find yourself making something you didn’t think you could. There are so many options out there – and that’s not a bad thing – but taking one thing at a time is a great way to start and progress.”