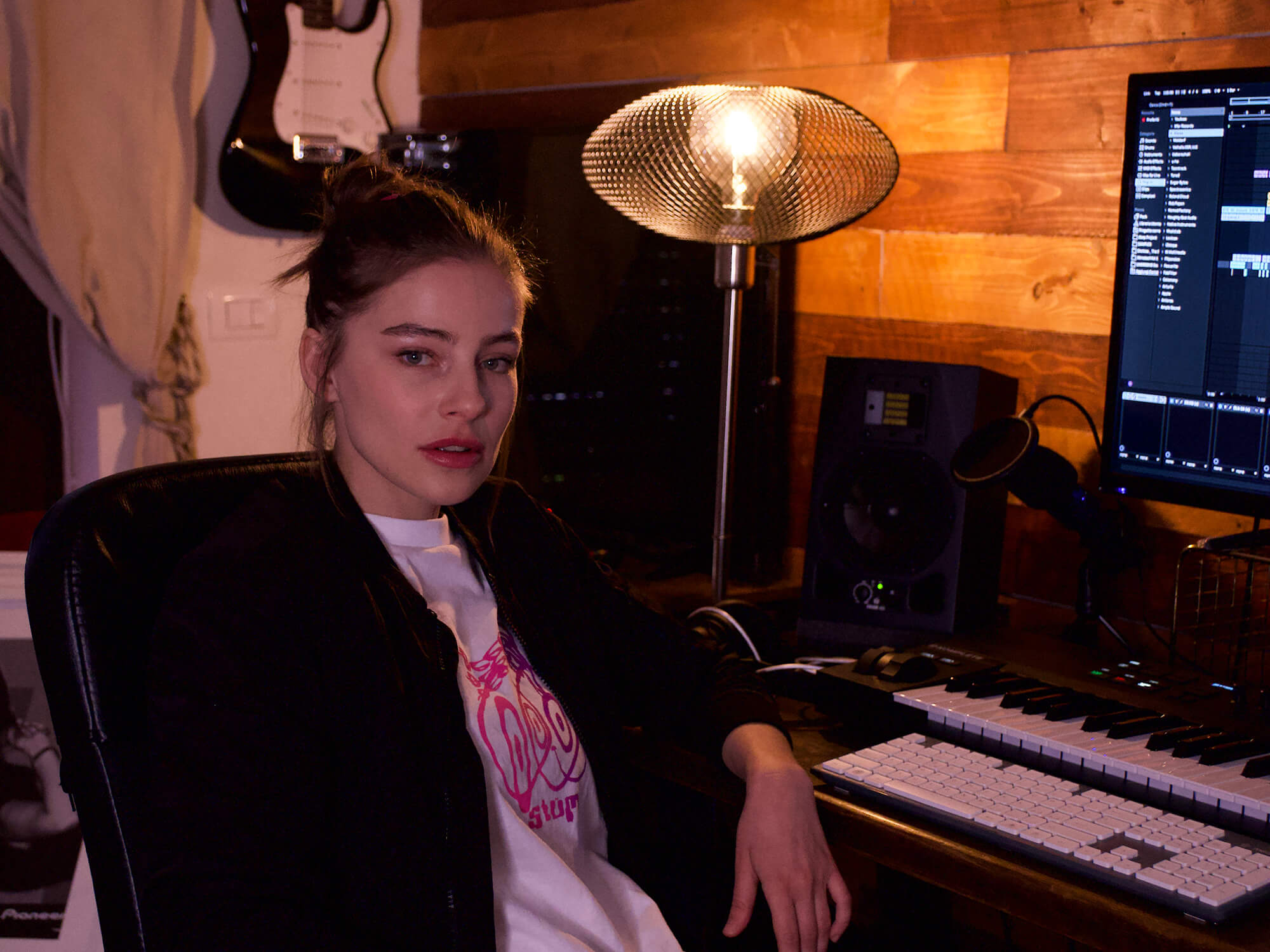 Anfisa Letyago: “I’ve never abandoned my original setup – my productions have evolved like me.”

It seems nothing can stop the meteoric rise of the producer, DJ, and label boss Anfisa Letyago, and this fall she is heading back to Malta for Drumcode Festival.

Anfisa Letyago’s bright-eyed smile is known all around the globe. From Ljubljana to Las Vegas and Enschede to Ibiza, lights are flashing, kick drums are pounding, and her joyous visage cuts through the visual cacophony like a beacon, signaling that the dance floor is a safe space.

Letyago is back. She’s helming the decks everywhere in the world, providing her heavy yet diverse take on club music. Like every other DJ, she took some time off during the pandemic but is now engaging in the type of rigorous tour schedule reserved for artists with a truly international presence.

“I’m extremely happy seeing that everything is starting again and I hope we’ll never go back,” Letyago tells MusicTech. “I’m experiencing a period of great creativity and development for my career. I have many exciting projects that allow me to look into a broader future and I hope I will have the chance to share my story to an increasing number of people.”

Letyago shares her story through all her activities within music. Beyond her DJ sets, her original productions and remixes have graced imprints such as Kompakt, Drumcode, and Herzblut Recordings.

Letyago also has her own record label, N:S:DA (read “Nisida,” after the Italian islet of the same name) that is home to many of her more personal and eclectic works, such as her EPs, N:S:DA and Listen. The label also recently started signing exciting new talents, including Florida’s own Durosai who this year shared his uptempo but minimal three-tracker, Fear is the Mind Killer.

“When selecting future releases, I let my instinct guide me. When I feel vibrations and strong emotions, then I know that’s something suited to my label,” says Letyago. “N:S:DA is a project that was born with the aim to tell stories of feelings – my feelings – at the very beginning.”

Despite her smile igniting and illuminating the souls of dancers on six continents, the story of Anfisa Letyago begins in one of the coldest and dimmest corners on the planet.

Letyago was born in a small town where it’s dark for nine months of the year. With social interactions limited by weather and the small population, growing up she would often spend her afternoons listening to the radio.

In the blistering cold of the seemingly endless winters, Letyago tuned in to songs from worldwide artists like Linkin Park, The Prodigy, and Massive Attack, but also dance music stalwarts like Tiësto and Paul Van Dyk. Through this music, Letyago saw a vision of a new world.

“We all are the result of what we’ve done and experienced in the past. Being born in the tundra has obviously influenced me and partially led to what I am today,” Letyago says. “When I was very young and I was listening to music on the radio, I kept imagining what I actually have become today. So yes, listening to the radio was like a window into another world – the one I wanted to live in.”

“My grandmother is like a mother to me, I used to spend a lot of time with her and I grew mainly up with her. She’s lovely, a woman of great feeling and love,” Letyago says. “Above all, she taught me to respect life, one of the most important teachings of all my life. I’ll never forget that.”

And Letyago never did forget. To respect life is to enjoy it, and Letyago is certainly enjoying her time traveling the globe as a professional artist. Her grandmother also helped her in that journey through her vast collection of records.

In listening to foreign artists like Al Bano, the legendary Italian tenor, with her grandmother on vinyl, Letyago fell in love with the Italian language, and when she was 17 years old, she moved to the city of Naples. The city she continues to call home to this day and the city where she launched her career.

“I always say it’s like I was born twice: the first time in Siberia, and the second one in Naples, which is not only the place I moved to many years ago, but it suddenly became my home,” Letyago says.

The second time Letyago was born, she was born into the world of the underground. She was amazed by the robust art and culture of Naples, falling in love with cooking (and eating) pizza, but it was the prominent club scene where she started laying down her roots.

In 2008, shortly after moving to Naples, Letyago became a disc selector in small bars and clubs around the city while Italian artists like Marco Carola and Gaetano Parisio served as primary inspirations as she was making a name for herself.

It was at Naples’ Duel Club in 2009 when Letyago played her first major gig in front of more than 2,000 people. And, although she remembers being quite nervous and even forgetting her own name, that was the first time thousands of people saw that same smile she brings with every gig.

In the years that would follow, Letyago was beaming at parties all over Naples, then expanding to Rome and Milan, then to other European hotspots like Amsterdam and Ibiza.

Letyago was DJing professionally for eight years before she shared her first official release in 2016, a collaboration with Leroy Styles entitled Stop Talking, released on Spinnin’ Records.

The story of how Letyago and Cox first connected is now a folk tale in the realm of dance music. Upon their first meeting in Sicily back in 2018 she gave him a USB with her music on it before a gig.

Moments later, he was playing her music for his headlining crowd. Soon after he offered her a release on Intec Digital and promised to put her on the 2020 Ultra Music Festival lineup in the Carl Cox Megastructure.

Cox had to wait until 2022 because of the pandemic, but he kept his promise and Letyago was the first artist to play the structure all weekend.

“Carl and I have become good friends. We talk very often and he always tells me how happy he is for everything I’ve achieved so far, reminding me to go on like this and stay true to myself,” Letyago says.

Connecting with Cox helped Letyago elevate her career to the international stage she is enjoying today. Like many of her peers, she’s finding time to produce new music on the road, taking Arturia’s portable MicroFreak synthesizer with her when she travels.

When she’s at her home studio in Naples in between runs of gigs, she uses Logic Pro and employs a wide variety of synthesizers and plug-ins. On Listen, the track that launched her label in 2021, she used the classic sounds of the TR-909 alongside modern virtual synths such as Rob Papen’s Predator.

“Today, my productions are more complex and are certainly characterized by greater technical precision, but I’ve never abandoned my original setup,” Letyago says. “My productions have evolved just like me.”

Letyago’s evolution is continuing well into 2022 as she prepares for the first full festival season since 2019. She is already booked for Sónar in Barcelona, Exit Festival in Serbia, and a slew of dates in Ibiza. But a particularly special gig will be the debut of Drumcode Festival in Malta this September.

The event was originally supposed to debut in September of last year, but COVID-19 forced a postponement. Like many of the artists, Letyago was booked for the original date last year and maintained her slot for 2022.

“Malta is a lovely city, I went there last year and was fascinated. It’s always a pleasure to play with Drumcode, especially considering one of my first tracks I released was via them. It’s such a great memory and I really enjoy working with this fantastic group of people,” Letyago says.

This won’t be Letyago’s first time in Malta – she performed a set for Cercle back in July 2021 on The Saluting Battery, an old artillery battery from the 16th century. Even astride weapons of war, she is still rocking the decks, smiling ear to ear.