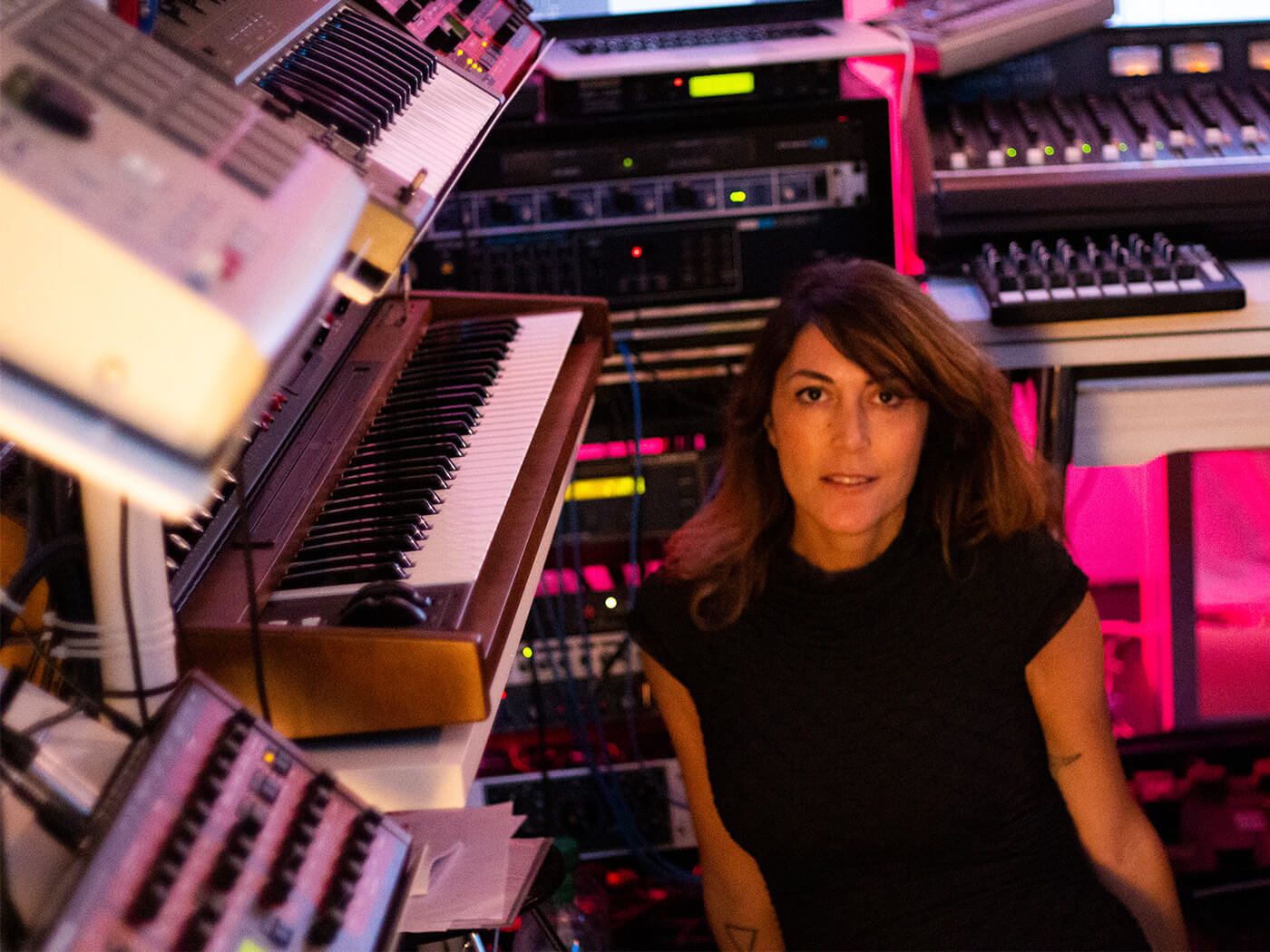 With a plethora of minimal, tech, deep and progressive-house releases on illustrious labels such as Crosstown Rebels, Poker Flat and Armada – plus a recent, extraordinary nu-disco remix of soul legend Teddy Pendergrass’ Do Me – Francesca Lombardo is as prolific as she is genre-straddling. Despite being an accomplished live musician and DJ, she was keen to avoid scrutiny from an early age.

“My father used to sing all the time and used to play a lot of instruments for fun. He just loved music!” Francesca reminisces. “I was in love with music since I was born, basically. When I was super-young, like three years old, I would sing in front of everyone, but I would hide my face and ask everyone to cover their faces while I was singing, too! When I was five or six, my parents bought me a keyboard to see how I reacted to it and if I would play. A few years later they got me a piano, and I started to take lessons.”

As well as learning to perform, Francesca’s early desire to write her own music manifested early in life: “When I was seven or eight, I wrote a song with lyrics. I remember the exact day; I was playing with Barbies on the floor around my mum and grandmother because my parents were divorced. I remember singing the song and bringing it to school and I proposed we could sing it during the school play. I sang the song to my schoolmates and taught it to them, and we ended up singing it as part of the play, which was super cool! Then when I had the piano, I would write melodies to go with the vocals, so I’ve been writing songs since I was a child.”

Although her talents earned her the admiration of her family, Francesca’s natural bashfulness prevented her from fully embracing music until later in life. “My mom and my grandmother were like: ‘Oh, you’ve got a lovely voice, one day you will be a singer!’ I think this was actually a bad thing for me, because they kind of put into my head the idea that one day I would just do that and I became really shy because of the expectation. While I was growing up, I was too shy to use my voice and it wasn’t until I went to university in my 20s that I actually felt confident.”

Francesca moved to London to study in 1999 and, having already been introduced to psychedelic and electronic music by her uncle, she quickly found a home in the city’s buzzing techno scene. “I started to go to rave parties, and I got into DJ’ing myself for fun. I began to meet all these great people and DJs, and everyone had a studio! I got into DJ’ing with my upstairs neighbour who had some studio equipment herself. I signed up for a music-technology course and got a loan from the bank for £5,000, which I had to pay back over about 10 years! That allowed me to get everything I needed to start with – an amplifier, speakers, a PC, a little mixer – just the basics. I’d go and show all these artists my music and I had good ideas, but I was really bad, mixing wise! The tunes weren’t playable.”

Getting her tracks up to scratch was a priority for Francesca, who discovered she found it easier to work with hardware rather than software. “It took me a while to improve. I took another course at a school called IMW. You only got to use the studio about once a month, but being in the studio, rather than on a computer, helped me. I preferred the audio engineering parts and using hardware. I never really produced anything at the beginning.

“I still didn’t have the right sound; it took me a while. I was good at creating and writing music, but when it came to the technology, it just didn’t sound good enough. I had to work on it myself and ask other people for help. I was DJ’ing and in bands in the meantime, but we never released anything. I didn’t release my first track until 2011, eight or nine years after I started studying music technology, so it was a slow process.”

Now after almost a decade of releasing her deep, often dark dance stylings, Francesca is much more confident about her technical abilities. However, she still finds she prefers to use hardware where possible. “I like to mix and record my stuff through an analogue desk, because it gives a little bit of edge to the sound,” she enthuses.

“I have it set up so that I can apply effects and dynamics… I don’t mind applying effects in-the-box, too, but I like to be able to touch things! I like to work in the analogue domain when I’m creating, too, because everything comes out on a different channel on the desk and I mix as I go, basically. I have the patchbay as well, so everything is connected. It’s super easy. I got my physical stuff set up by a friend who used to work at Funky Junk in London; he set it up so it’s easy for me so I can just connect something by using a cable and then have it come through on the desk. Sometimes, I use other people to mix my stuff because I don’t have all the equipment I’d like to have and I think sometimes, it’s good to get it mixed somewhere else.”

Francesca isn’t at all reticent to reveal that she’s had plenty of help over the years. “I have had amazing teachers throughout my life, like some of my friends. For instance, Lawrie Dunster from Curve Pusher. I used to live above their massive studio and he’s a really good friend of mine. So at times after work, I would go down to this amazing studio and make a track with no computer. I also worked like this with Darc Marc, who also released on my label as half of Delos. These guys, they’re in their mid-40s, so they are like teachers, you know! There were a bunch of others, too. I was lucky because I had these people around me who were excited to teach me.”

Rise of the machines

With such a fondness for the hands-on hardware experience and having already made music in a computer free-environment, does Francesca ever experience the desire to ditch her current sequencing software Logic Pro and go DAWless?

“Sometimes I think, one day, I would love to produce techno live with no laptop. I have a controller now, which is the BeatStep Pro from Arturia. You can connect it by CV or by MIDI and it has three different sequencers you can assign to different machines. So it’s like a MIDI controller, but with three channels of MIDI, so you can control a drum machine and control a bunch of things with the other two channels. You can create your track just using this controller. So I do that sometimes, but then I record it into the computer. For my next step, I would love to buy a tape machine, just a stereo one. I recently recorded a track with Hannes Bieger on a 24-channel recorder and it sounded so amazing, but I can’t afford that!”

Another bit of sequencing hardware Francesca uses to break free from the constraints of the computer is the Akai Professional MPC2000XL. “Obviously, now there are easier ways to do that kind of thing, but to be honest, it is different: there is something that’s in the groove and it sounds different when you sample something and edit it in the MPC, and it’s fun! I want to use it more, but time is limited in the studio. I would love to do a track just using the MPC. I put the output expander in it, so I have eight outputs plus the stereo out – and I replaced the floppy drive with an SD slot, so I can put as many samples into it as I want to now.”

Naturally, given her background Francesca is a hardware synth aficionado, but what are her favourites? “Of the synths that I have? Well, of course, the Moog Voyager. And I love the Roland SH-101, the sound is great, I have used it on quite a few tracks as the bass synth. I have the Arturia MatrixBrute now and it’s great. I still think I need to learn how to use it better.

“You need to spend so much time just learning your equipment, it’s so important that you do that otherwise, you’re buying something and not getting the most from it. It’s not such an issue if it’s something simple like an SH-101, all these vintage synths they really work the same, but new synths are far more complicated. But my favourites by far are the Moog and the SH-101 because of their sound, they are so analogue and warm, I love them!”

Lombardo doesn’t just limit herself to analogue synths and has a soft spot for a digital classic, too: “I’ve got an Access Music Virus A and a Virus C,” she divulges. “When I was in the studio above Lawrie, he lent me the C. With that one I did the first release on Crosstown – there were a few sounds on there that I used. Then I bought the A, because I found one super cheap on Gumtree. I always wanted to buy another C because it reminded me of Lawrie’s tracks, and then I bought one of those as well! They are different, and I wanted to use if for live performances. I also got the Sequential Prophet-6, the ‘new’ one, which is a great synth.”

Vocals are an essential part of many of Francesca’s tracks, so how does she record and process these? “I’ve got a preamp, a Universal Audio 6176 that I use, and my favourite mic is the RØDE NTK. I also have a Mojave mic, which is a bit harsh, but it gives my voice a breathy quality. This area is something that I want actually to invest money in. I’d like to get a Neumann, but it’s a lot of money!

“I love to record my voice when I’m alone in the studio. I’ve found a way to make a recording that sounds great. It’s a setting on my preamp, plus the mic and I have a bunch of effects that I use to make my voice sound a little bit dreamy. On the very early tracks like Is It True or Life Of Leaf, they are virtual effects; I use Soundtoys a lot. I love Soundtoys: in particular Crystallizer and EchoBoy. Now I have a few new effects like MOD Duo, which is hardware. MOD Devices is a company from Berlin, you hook the MOD Duo up your laptop, you go to their website and you can create your own effect chain virtually and then save it on the hardware. It’s crazy! It’s such a good piece of equipment. You can create anything you want!”

Tutorial: How Francesca Lombardo sculpted the beat on her track Psycho