Flight Facilities on their sophomore album, FOREVER: “More than anything, it’s our output that keeps us sane and inspired to continue”

Aussie producers and DJs, Hugo Gruzman and James Lyell, take off for their second flight in seven years. Fasten your seatbelts. 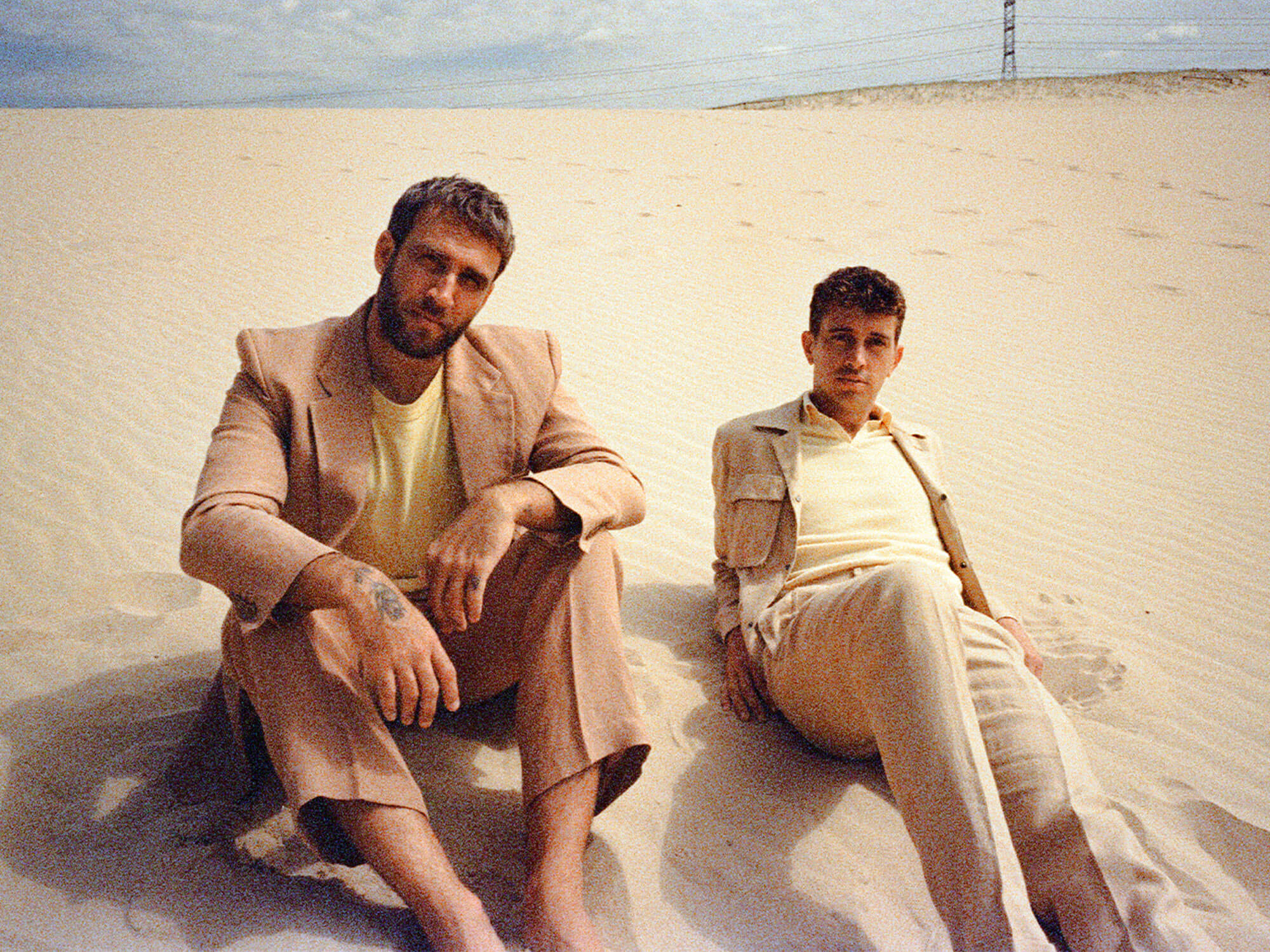 Hugo Gruzman and James Lyell have embarked on their return flight to Australian label Future Classic with their second album, Forever. It’s been seven years since Flight Facilities first landed with their disco-laden debut, Down To Earth, an ARIA-nominated album boasting some impressive names. Reggie Watts, Kylie Minogue, Bishop Nehru, Owl Eyes and more packed their bags to join Flight Facilities on the Gold-certified album.

Since 2014, the duo has released a slew of singles and remixes, continuing to bring more artists aboard, including Aloe Blacc and Dustin Tebbutt. Flight Facilities’ ceaseless passion for collaboration has brought new faces to their sonically versatile album, Forever. Compton’s Channel Tres lends his effortlessly cool vocals on the bouncy intro track, Lights Up, and New Zealand duo Broods laying down a smokey-glass voice on the title track and What I Want.

We buckle up and learn how Hugo and Jimmy’s playful approach to sound design led to seriously supersonic hooks and basslines. They also tell us how they create songs much faster compared than when they produced their debut.

Hey Hugo, Jimmy. It’s been a while since Down To Earth! What have you been up to since that album dropped? How have the singles you’ve been making informed the process of this album?

“The in-between singles have undoubtedly led us to the sound and structure of FOREVER. We’re glad we were able to maintain that output because it prevents fans from feeling alienated by the potential developments we’ve made in production and style. Some artists release albums that can feel worlds apart. And while that kind of evolution can be impressive or disruptive, we’ve found that keeping a sense of our origins has been important to reaffirming the familiarity people have with us.

“It also obviously helps maintain some form of relevance for us, too, so we don’t fall out of the public consciousness. More than anything, it’s our output that keeps us sane and inspired to continue.” 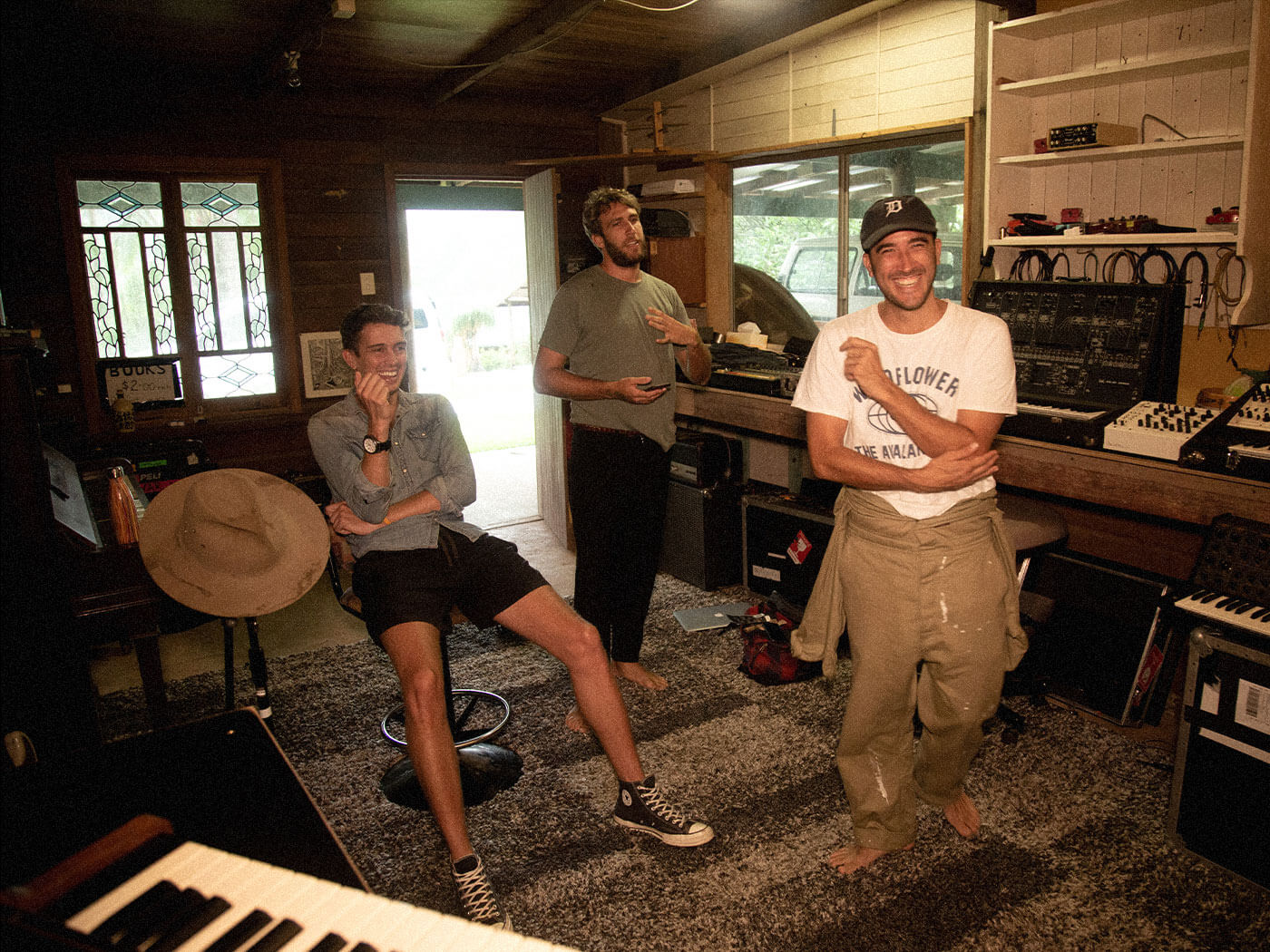 What’s the message you’re conveying with FOREVER, and how has your production helped you achieve it?

“At the beginning of 2021, we had a conversation about what we wanted FOREVER to be. And our answer applied both the album artwork and the music we put on it. We wanted it to be a sequel. Something that had the recognition and pulse of Down To Earth, but with enough stylistic difference to feel as though there’s progress.

“One of the main ways we achieved that was through the help of Jono Ma and his incredible synth collection. The analogue nature of the instrumentation meant the depth and width of the sound was far more expansive. Down To Earth was a bedroom record, and it possesses the naive charm of one. It’s a valuable quality that cannot be underestimated because it displays a sense of honesty that people seem to resonate with.” 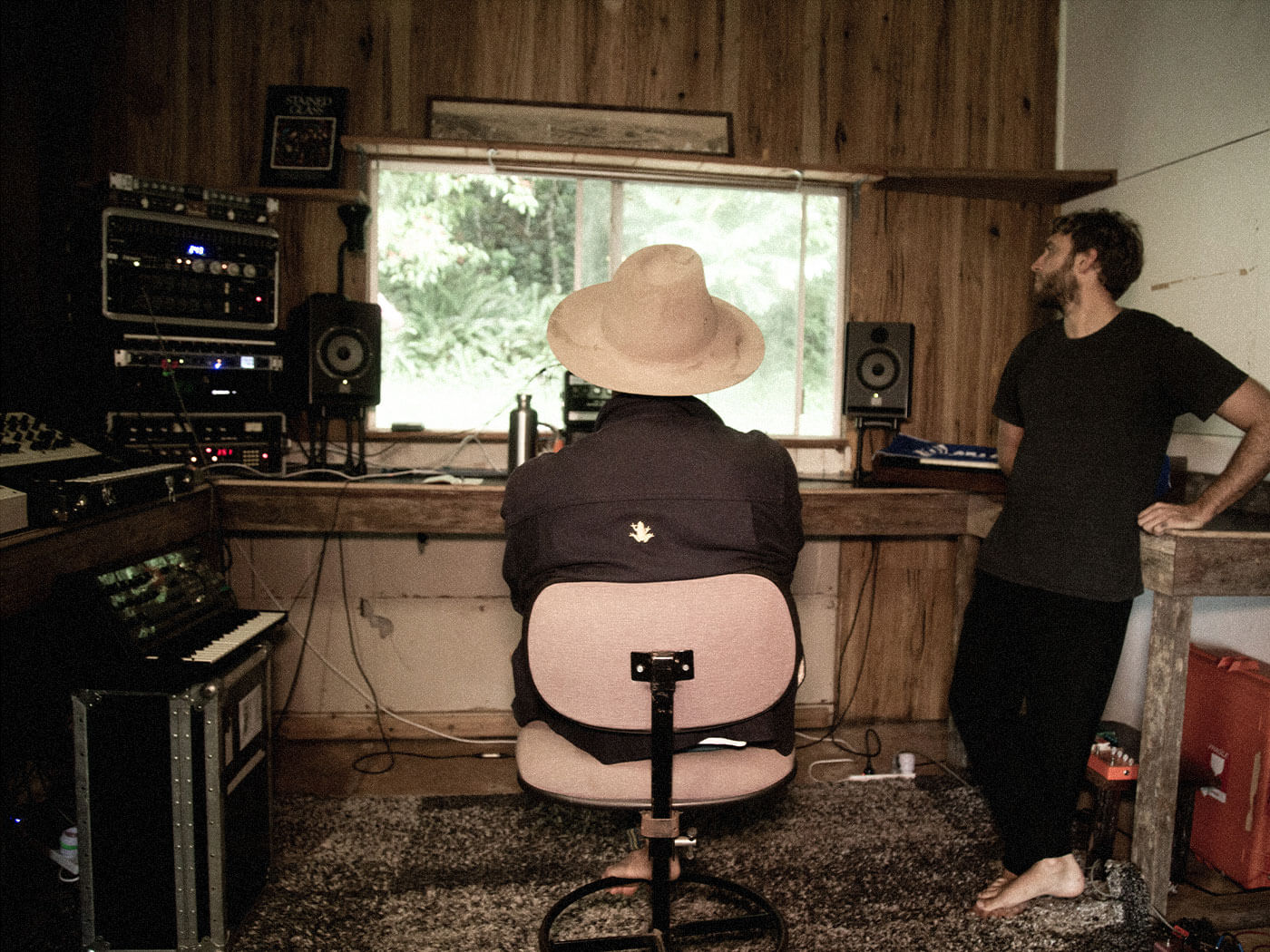 “FOREVER has a stronger studio album quality to it, which we feel comes with maturity and professionalism, but sometimes people can read that as too calculated and methodic. We’re genuinely excited to see how people respond to the different dynamic.”

You’ve moved away slightly from the disco riffs and basslines that can be heard through Down To Earth. How have your tastes changed in the last seven years?

“We still love disco and those kinds of basslines. And we would have loved to have a song like that on this record, but we never created one that felt strong enough to include. We’ve got plenty of those kinds of demos lying around, but they need to be handled with care. It’s easy to come across as a bit too bubblegum when making them. They can age terribly if it’s not just right.

“This album felt slightly more directed at being a little more dancefloor-friendly. The great irony of it all is that we haven’t been able to go out dancing for a while. But, with any luck, we’ve timed the release with a dancefloor renaissance.” 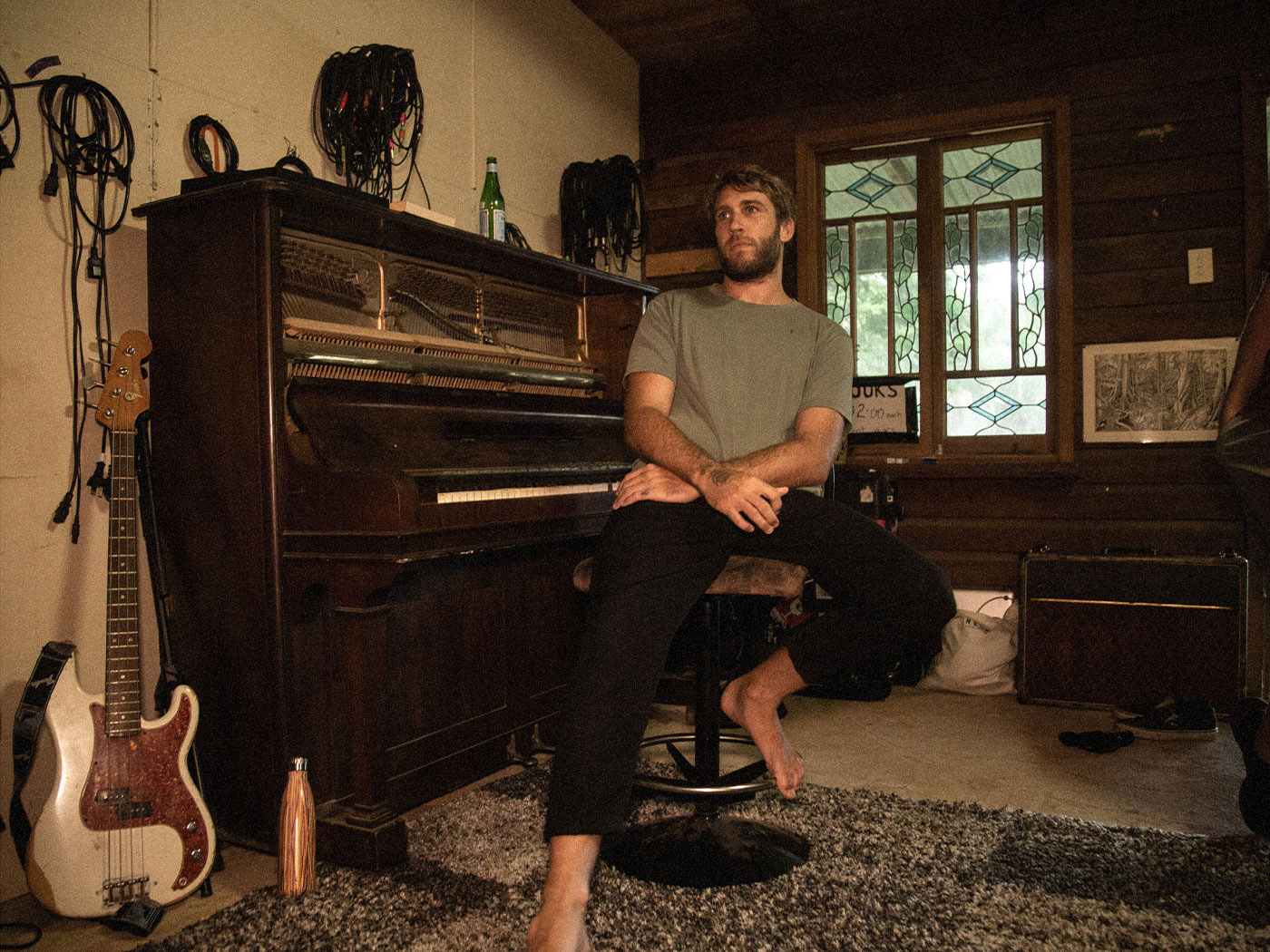 One of the biggest singles from the album is Lights Up with Channel Tres. What was it like working with him, and how did it start?

“We were in LA, and our label asked us if we wanted to work with anyone. We were listening to Channel’s Jet Black at the time, and we desperately wanted to do a session with him. The stars aligned, and within two weeks, we had a few hours to work together.

“Everything that comes out of Channel’s mouth sounds like a dancefloor hit. He has such a naturally compelling voice. We recorded every second of that session we possibly could. Funnily enough, we needed most of it. The song is pulled together from about three different recordings that day. He sang on two beats, and we even recorded him with an iPhone in between takes. The whole lot made it onto Lights Up in one form or another. We worked on it for about a year until we finally settled on a final structure.”

There are collabs everywhere on this album, except for The Ghost and Altitude. What inspired you to collaborate with these artists?

“We’ve built our whole career on collaboration. It means that, melodically and lyrically, we’re not always falling back down the same holes, so the content feels newer and still interesting. It’s a bit like making kids together. There’s something in the DNA of all the artists coming together to create something that no one of them could have achieved on their own.

“The choice of collaborations came down to a few reasons. Firstly, they all have great voices. Secondly, we don’t necessarily care who the collaborative artist is, and more so that we loved the final product. Broods are good friends of ours, and Georgia is a delight to hang out with, but that doesn’t change how we selected her features. The fact that we have a friend on the record is just a bonus to the quality of the content she contributed.” 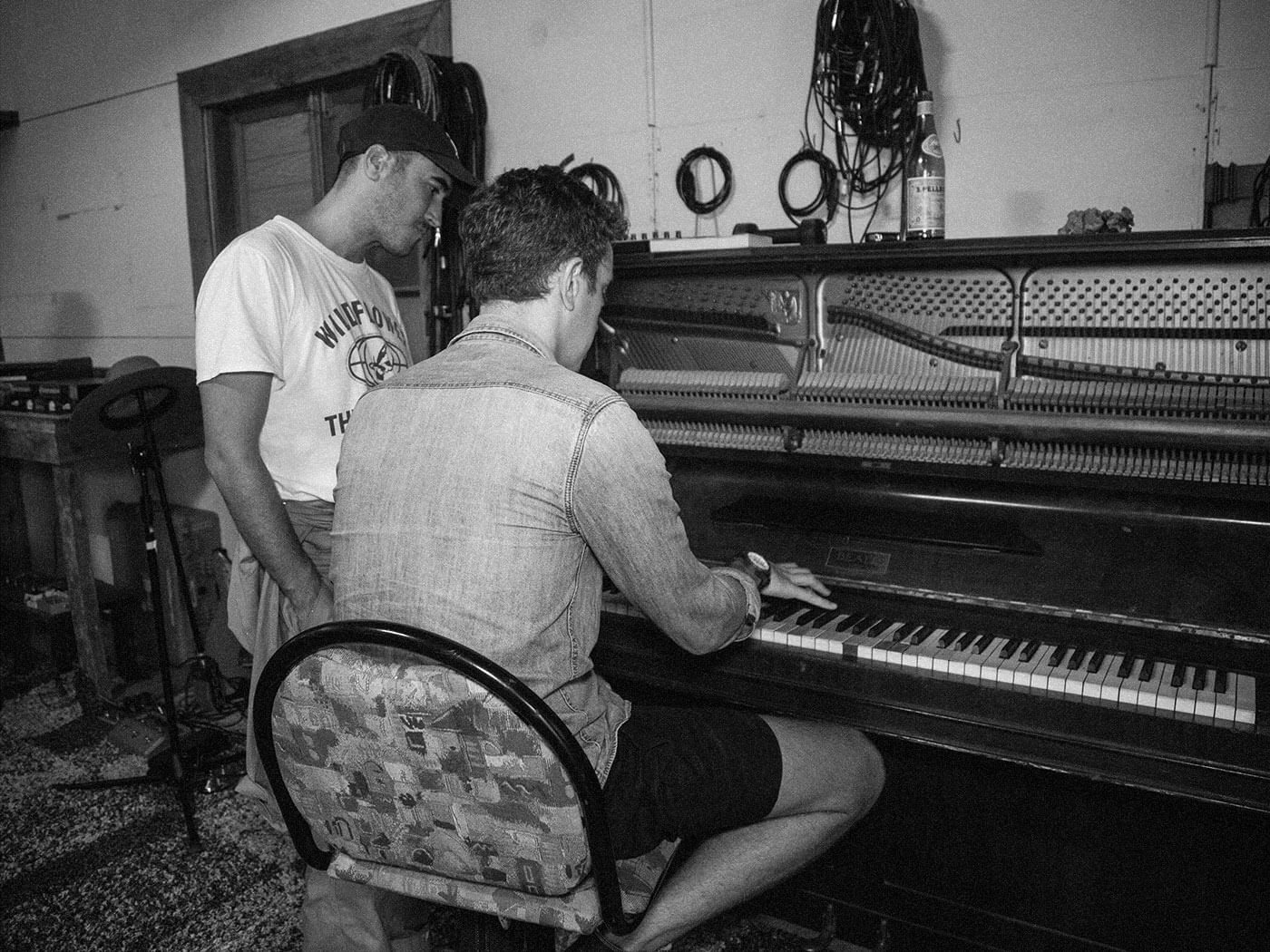 “Your Smith was a natural fit with us and seemed to glide over whatever music we put in front of her. She’s a classic ear-worm artist, and the more we played the songs she worked on, the more we fell in love with them. Emma Louise wrote two songs on the record, and we have a bias for the melodies and lyrics she creates. She almost seems ingrained in the Flight Facilities sound at this point, so perhaps it was her musical familiarity that made her feel like such a natural fit for us again.

“Jordy Felix has such a beautiful voice, and she was the only one who could do Emma’s melodies any justice. We’ve always been big fans of revealing smaller or unknown artists because it means the songs have to stand on their own merit and not rely upon the name itself.”

Do you feel like your production knowledge has matured since Down To Earth?

“In terms of the actual sonics of production, probably not as much as we would have liked. Jono Ma helped us bridge that gap, and so did Ewan Pearson in the mixing phase. The process of how we create songs has become far faster than it ever was. We know how to put a full song together quite quickly now, which gives us a pretty good sense of whether the idea is worth pursuing.

“In the past, we’d often waste huge amounts of time trying to fit a square peg into a round hole before eventually giving up on it. Now I think we’re better at spotting the ideas that have more potential.”

What gear do you think has been integral to FOREVER? How did you use it? Why do you love it so much?

“The Korg Arp 2600 and the Oberheim Two Voice. These synths appeared on basically every song on the record. The sounds they made felt like they were from the past and future at the same time. That feeling gave us faith that the sound of the record will age gracefully and not feel too era-specific.

“Considering how much we relied on soft synths on our previous record, it was a lot of fun to experiment with the hardware and parameters of those synths. We spent a lot of time making stupid sounds on them purely for laughter and our enjoyment.” 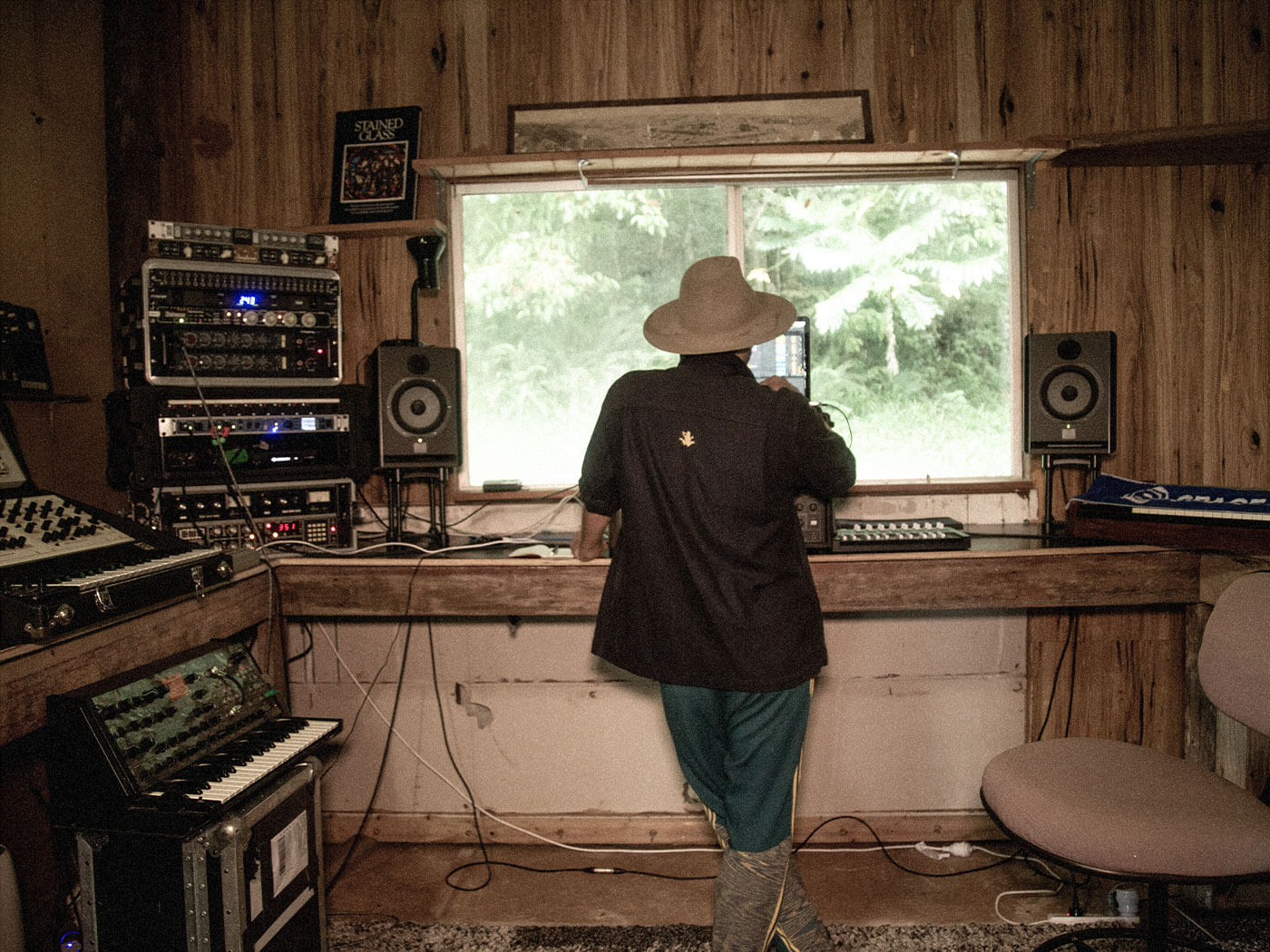 You’re about to head on tour – what’s your live setup looking like at the moment?

“We’re still experimenting with our live setup. Typically, we try to make it a combination between DJing and live performance. There’s a habit with dance acts to play the whole backing track through a hidden laptop, which can sometimes feel weird on stage. So we try to integrate our love and comfort of DJing into the show, so the backing track doesn’t feel like a dishonest element we’re trying to hide.

“We want the audience to see that element, so it’s not the elephant in the room, then we play additional synths over it. Korgs, Roland Junos, 303s, vocoders, MPDs, SPDs, as well as our live vocalists are all in the mix.”

You’ve got some real slick house artists on some of the remixes – Loods, Honey Dijon, Mousse T, kryptogram – what do you love about these artists?

“The fun of choosing remixes is that you ask the artists you love and then hope they say yes. We’ve been insanely lucky with the remixes we’ve had delivered in the last few months, and it always brings a smile to our faces when we get to play them out in venues.

“We grew up in a huge remix culture, and we still place a certain value on it for the dance culture that goes with it. Mousse T was someone we listened to as kids. Never in our wildest dreams did we think he would remix our work. He’s such a lovely guy, and he puts a huge amount of work and effort into every one of his productions.

“We’re big fans of the whole scene over at Defected, and it’s been inspiring to see them bring the fun back to live parties. There’s a habit of trying to be overly cool or underground when playing DJ sets. It’s nice to see those guys taking hold of unashamed fun and positivity within that realm.”

Finally, what is one piece of advice you would give yourselves pre-Down To Earth era?

“Nothing at all. We’d be afraid we’d jinx the magic in the air at the time.”