We like to highlight new and up and coming artists in MusicTech and here we interview Hannah Peel, who has already released two albums as a solo artist, collaborated with John Foxx and released music through the band The Magnetic North… 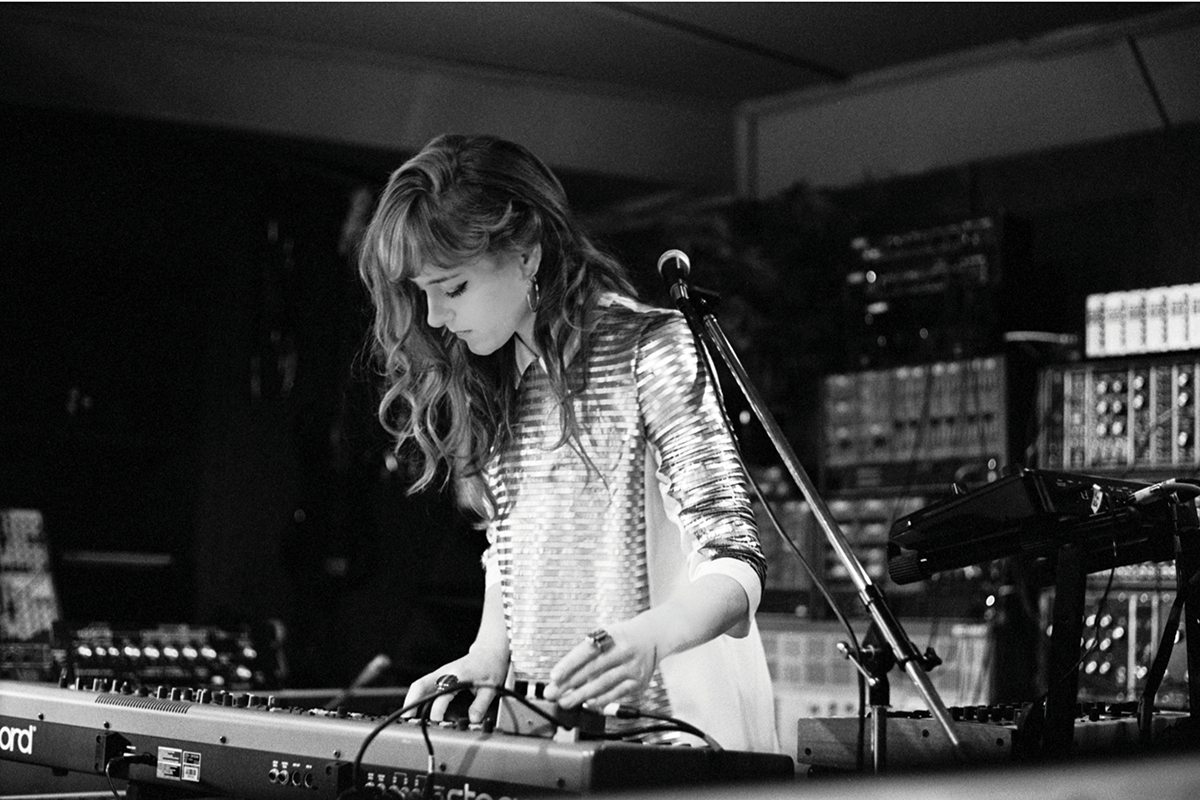 Hannah Peel is a solo artist and member of The Magnetic North, (featuring Gawain Erland Cooper and Simon Tong, formerly of The Verve and tour musician with Blur and Gorillaz).

She produced a track with John Foxx in 2013, has an alter-ego called Mary Casio which combines analogue synths with a 33-piece Yorkshire colliery brass band – yes, we know, yet another one of those – and recently released a critically acclaimed solo album called Awake But Always Dreaming,l the follow-up to her 2011 release, The Broken Wave.

MusicTech: What’s your philosophy when it comes to composition?

Hannah Peel: For my solo work, I like to play with layers, hidden frailties and contrasts. The blend and dissimilarities of analogue synths and machines with light minimalist resonances, melodies and my vocals has been an ongoing unearthing in the last few years of my work.

The human voice is so harmonically rich – every single human is different, playing with the voice as an instrument always creates something more unique. Everyone can get a similar sound out of a vintage Juno or a Moog, but combining them with something as volatile and fragile as the human voice can create a rich web of sound and happy accidents. I really enjoy what we call ‘lab time’.

Exploring a sound palate, textures, samples, feelings and instrumentation. It helps to establish that first, before hitting record on a new song or arrangement. It creates a spark, a freshness and is a great icebreaker when working with someone new or old. It allows you to both connect without the awkwardness of talking too much.

MT: Would you say that there is a particular ‘Hannah Peel sound’ and what is it?

HP: In short; organic, analogue music… or, as the electronic artist and my good friend Benge affectionately says, “Electro orgustic music”. Emotional, real and warm electronic music that makes you feel something. There is always a song or story behind it, however esoteric or leftfield it may be at times.

MT: Tell us about the new album. Where does the title Awake But Always Dreaming come from?

HP: The album was inspired by a moment last year with my late grandmother who had dementia. She was awoken by hearing music she loved and it was a very surreal experience.

My album delves into the mind and I hope it takes you down into the rabbit hole of the brain and an imaginary world, one where I wanted to believe she had gone. She was in the room with me, awake, but her mind was so often in that dream state between consciousness and subconsciousness.

MT: It also sounds like you have a few collaborative projects on the go…

HP: I really like to collaborate and know it can be a very magical process if you’re open to it. Positive attitude promotes creativity and when negative, it’s like someone turning the power off in the studio, so I always try to enthuse and find solutions to problems if I’m feeling like something isn’t working.

It’s best having a break and going for a walk than fighting it! Finding some common ground, literary, poetry, Oberheim drum machines, Irish wheaten bread… It always helps.

Earlier this year, my expansive band project (The Magnetic North) released a surprise follow up album Prospect Of Skelmersdale. We’ve just about finished touring it and watching the audiences grow bigger and more passionate with each show was an incredible feeling. Green Man festival and a one-off show at RIBA were a triumph!

I was also involved in the new Beyond The Wizards Sleeve record on vocals and have also composed for a new project called Mary Casio – traditional colliery brass band and analogue synths, which premiered earlier this year in May.

MT: What would you say your role is in the studio?

HP: Melody, texture, exploration and a different view, or one to always challenge. I tend to get very deeply involved in projects, so I’ve learnt over the last few years to only choose to work on things I want to know more about and like the people involved. 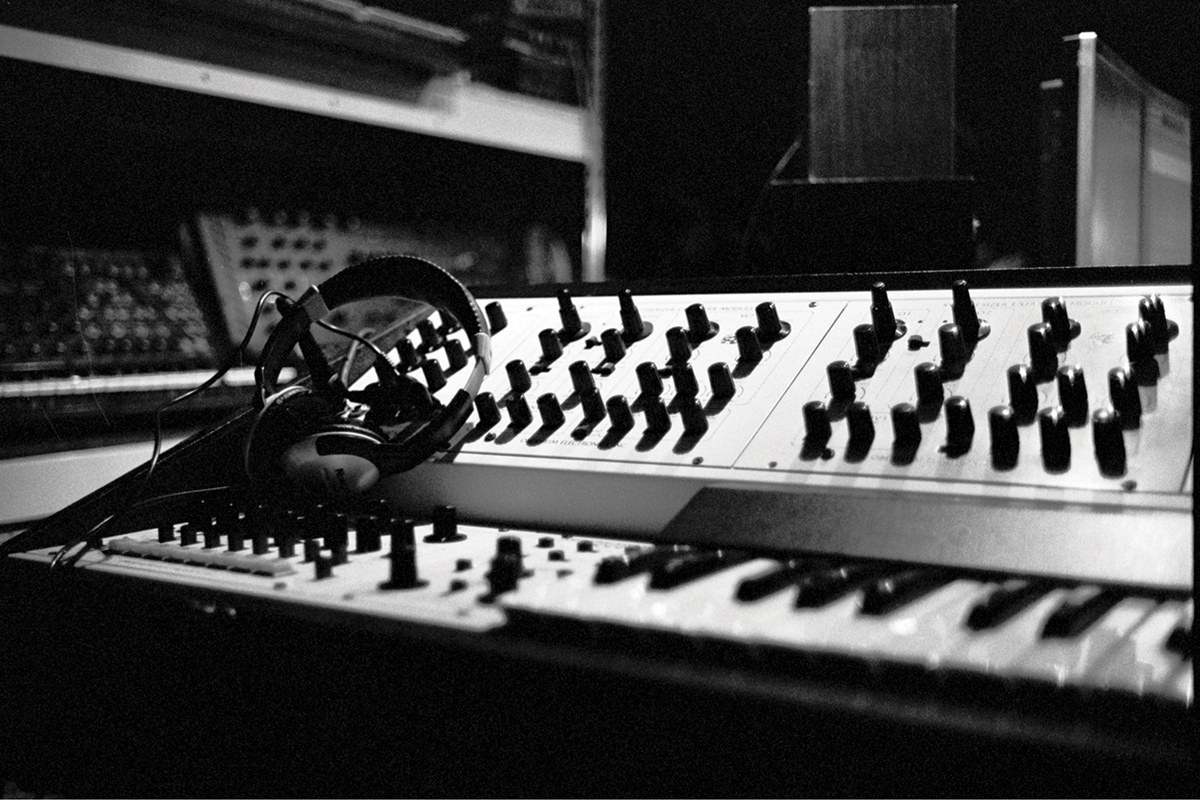 With The Magnetic North, we collaborate on many levels, from researching and writing to production, orchestral scoring and arranging, touring and managing ourselves, too.

It’s very rewarding, yet lots of hard ‘behind the scenes’ work.Everything is deeply involved for records now, as we live in such a visual society it’s not just about the music anymore. The producer should not only hear but see the music, too, and be able to keep the artist or musicians on that track to achieving something different – from the day it’s created to the day it’s released out the door.

MT: Tell us a little about your studio?

HP: The private studio in Hoxton is a really special place, so much so, I don’t want to give too much away about it, but those that use it make records and like me, love the atmosphere of lots of creating every day.

It used to be coined the name ‘analogue synth heaven’, centred around a wonderful Studer desk, but now it enters its new decade of use by being a more hybrid studio, both with a mix of rich outboard gear, classic synths, but also in-the-box power via Universal Audio, Logic X and Pro Tools. Gear is always joining the family, though.

MT: Tell us about some of the older gear?

HP: There are quite a lot of vintage synths in the studio, but my Juno-60 is my go-to instrument at the moment. There is a Roland RE-201 Space Echo that is used on everything, too, really.

Even its spring reverb alone is wonderful. The tape texture breathes and, like the Juno, seems to generate its own sounds without having anything going through it. I have an open-fronted upright Yamaha piano I use a lot for recording and pretty much all writing ideas.

I also have an Oberheim DX drum machine that is incredible for getting ideas down quickly.

Talking of drum machines, I’ve just acquired The Elka Drummer One. It was used on my favourite electronic record, Cluster’s Zuckerzeit! When you press all the patterns in at random, it creates the most fantastic crisscrossed syncopated patterns, like mixing a polka with a waltz and a rock beat.

Every time it’s used, you can just imagine seeing Dieter and Roedelius’ eyes light up at the new technology. It’s a massive box! 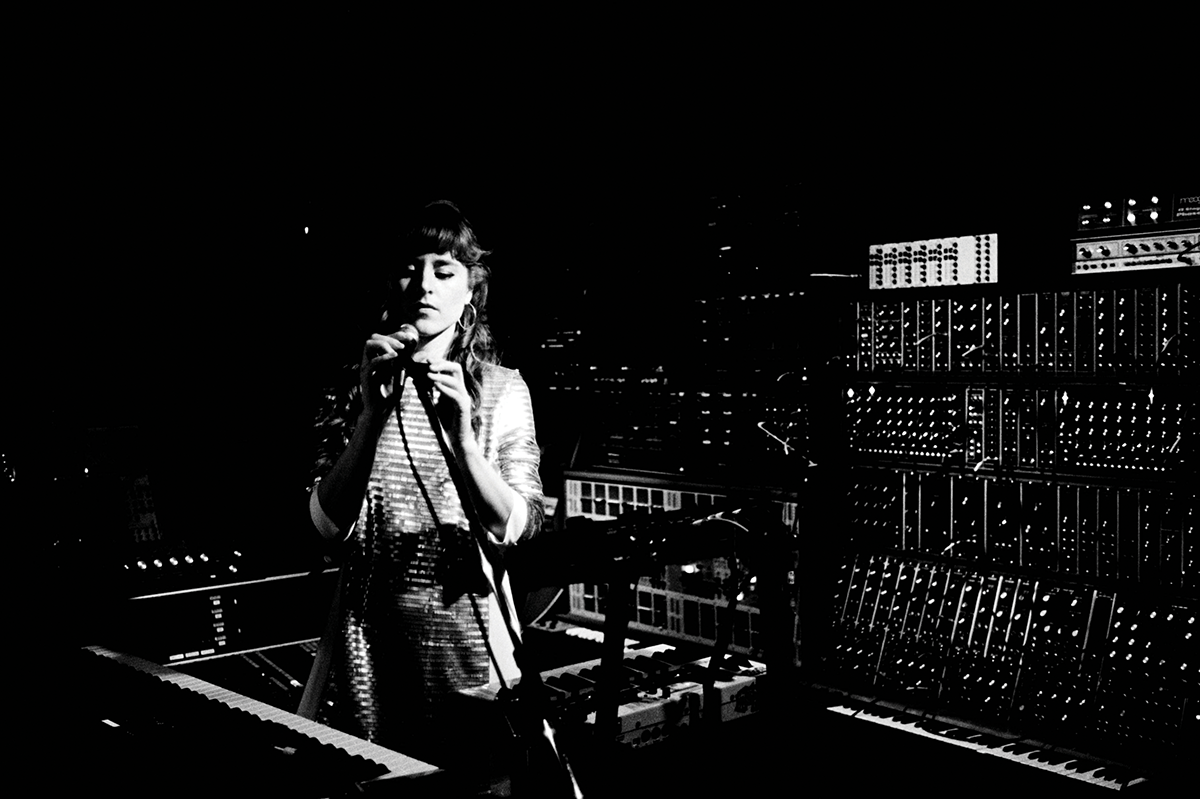 MT: Tell us about some of your outboard gear?

HP: Using a decent outboard preamp saves so much time in the mix stage. The UA 610 is perfect. A great preamp and simple EQ but with an LA-2A compressor built in. This is my favourite compressor for pretty much everything, to be honest.

It’s bright and warm and perfect for vocals, strings and synths in particular and bass, of course. Got a chap to build me a Pultec EQ, which is great for low-end drive and cut and a wonderful musical air on the top.

In terms of plug-ins, the Pultec EQ (it’s stereo, and I don’t have two!) and the UA EMT 140 is perfect (we used to have a real one here upstairs, but it was enormous, it took six people to move out the door and blocked the street for a bit).

The Soundtoys filter and delay are really great, too. I love granular delay. You can turn your own voice into a synth – not a vocoder – and it’s so harmonically rich, even though you feel like an idiot when you do it.

MT: What is on your wishlist, studio gear-wise?

HP: I’ve just bought the Moog Mother-32, but really, deep down, I’m toying with either the vintage Minimoog Model D or the impressive reissue. Either way, that’s the one. No digital panels and presets, just a pure archetypal synth. Also got my eye on a Tascam reel-to-reel eight-track tape.

I’d rather have less gear that I fully understand and work than more that I used less often. It’s better to have limitation and know your stuff inside and out before indulging in something new. It feels better and means the studio is just a refined and tinkered engine where nothing gathers dust. The workflow can be really quick then.

MT: Is there anything you’d like to see developed, in the gear realm?

HP: The reissue of the Model D is a great example of classic and modern application – robust enough to tour, with some more reliable features, yet still using the same circuitry and filters as the vintage one.

I’d love perfect non-wired headphones, but I just don’t like or trust Bluetooth yet. The only wires I would like in my studio are on Modular synths and patch bays.

MT: What advice do you have for working in today’s music industry?

HP: Be positive and follow the best route and ‘flow’ for you. When you enjoy making a certain piece of music, it’s usually the track that others will also enjoy listening to, too. When problems arise, find solutions together… it’s a small industry and you will meet people again along the way.

MT: And from working in the studio?

HP: Apart from turning off the ’phone for periods to focus, treat every day as open-eyed as if it is the first time you walked into the studio. Pick up instruments, explore, find new sounds, and keep learning for fun. It’s okay to be militant with your time, too, when making time to create.

We don’t have much of it, really, and we used to be forced to go to school or have normal jobs, so that time during the day is such a great time to focus. Single-minded focus is a wonderful thing, but don’t forget to come up for air. 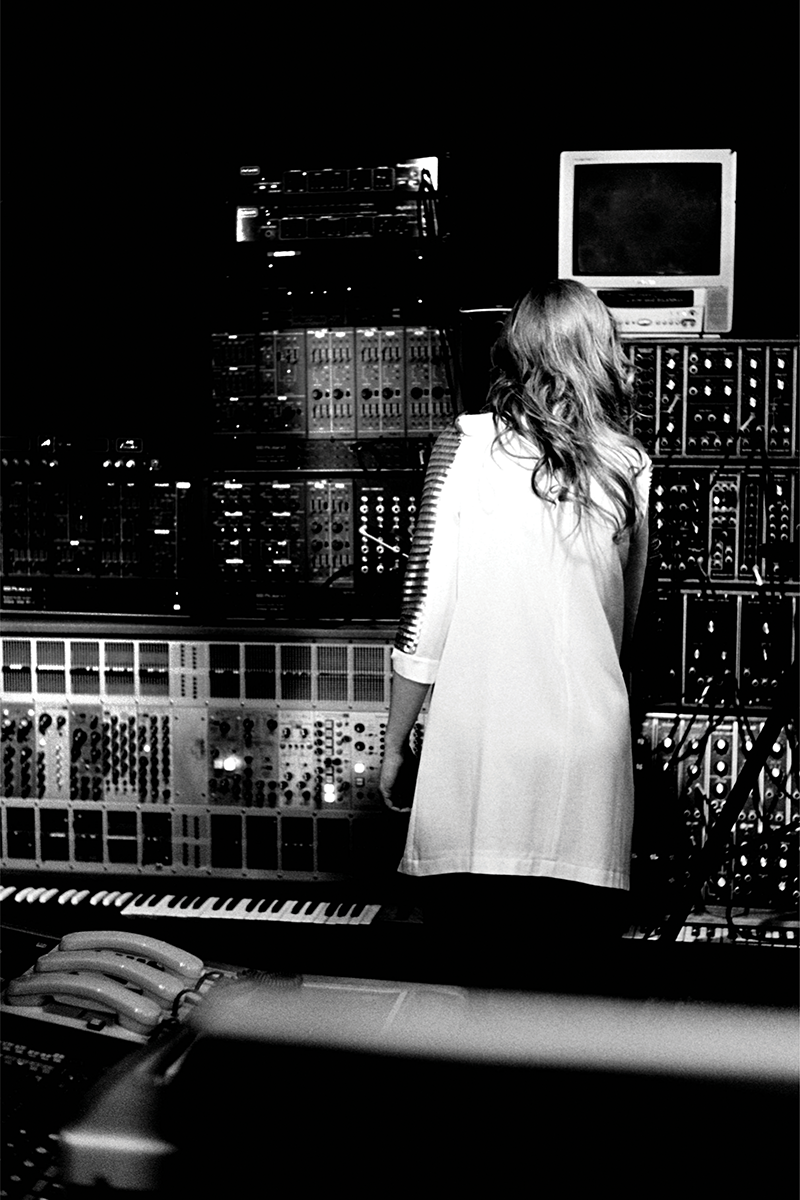 MT: So tell us how a typical Hannah Peel track usually comes together?

HP: For me, it always comes from a melody. Whether it is short or long, that comes first on any instrument. After that, it’s about exploring… one of the best things about music and songwriting is it is an ever-evolving process.

The song or piece of music is never finished until it is released, in my humble view, and even then, when you take it live, it grows into something else, too!

Awake But Always Dreaming is a record of two parts, that delves deep into the mind, where even the neurons and synapses can be heard crackling. From the luminous formation of youthful, vibrant songs and memories to the slow insidious and dark damage that can occur as we age; the record was made in two halves that reflected my own personal experience.

MT: What have you got planned for the near future?

HP: Alongside touring my new solo album, I’ll be recording the Mary Casio album live on analogue synths with a 33-piece colliery brass band before we play the Southbank in July 2017. Can’t wait, but I also want more ‘lab time’…