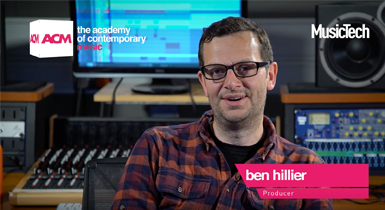 We’re back in Metropolis Studios, where this time round we’re chatting with Depeche Mode producer Ben Hillier for some masterclass tips…

ACM was thrilled to host Depeche Mode producer Ben Hillier at Metropolis studios recently for an intimate masterclass with their students. Covering his career alongside plenty of useful advice on becoming a successful producer, the students clearly found the session very engaging, with questions throughout.

Presented by the Academy’s Head of Creative Industry Development, Ace (also the guitarist in Skunk Anansie), the session kicked off with Ben telling the students how he got into the industry. Revealing that his first studio work was on classical music, Ben went on to talk about the time he’d spent working with Blur and Depeche Mode before setting up his own studio facility just outside of Brighton.

When speaking about his studio, he shared that the walls of the control room were actually built with straw bales “they create a really dead sound which is great for mixing”.

During the class, Ben showed an example of a multi-track recording in Pro Tools. He broke down the recording session and explained his process when producing a track. He explained how he believes the key to a good vocal performance lies in the rhythm of it, and that he therefore favours good rhythmic takes over good tuning when comping a vocal. He also shared that he likes to use analogue gear as it helps to limit the choices you have earlier on in the process.

When talking about the recording process, Ben shared that he prefers to capture a band together in a live recording, rather than recording each part separately. When justifying this approach, he explained how a band sounds better and tighter when performing with each other in a live situation. One of the top tips of the session was to use an arpeggiator instead of a click track, as it makes the musician think about their performance more. Many students asked about the vocal recording process, to which Ben replied “I like to record vocals in the control room with a dynamic mic”. When asked about his favourite microphone for recording vocals, Ben revealed that it was either an SM58 or an SM7.

With questions encouraged throughout, it was clear that the lucky students in attendance enjoyed themselves and learnt a great deal about the production process.

If you want to learn directly from those that live and breath the music industry every day, book onto an ACM Open Day now: www.acm.ac.uk/open-days