All Yours – Anushka Interview

Childhood piano lessons can make or break you. For Max Wheeler, half of dance act Anushka, you can easily argue the former (but not for the reasons you’re thinking). Andy Jones breaks the Sylenth… From getting fired – yes, fired! – by his piano teacher at just ten years of age, Max Wheeler has come […] 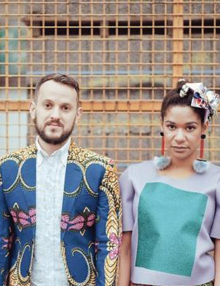 Childhood piano lessons can make or break you. For Max Wheeler, half of dance act Anushka, you can easily argue the former (but not for the reasons you’re thinking). Andy Jones breaks the Sylenth… 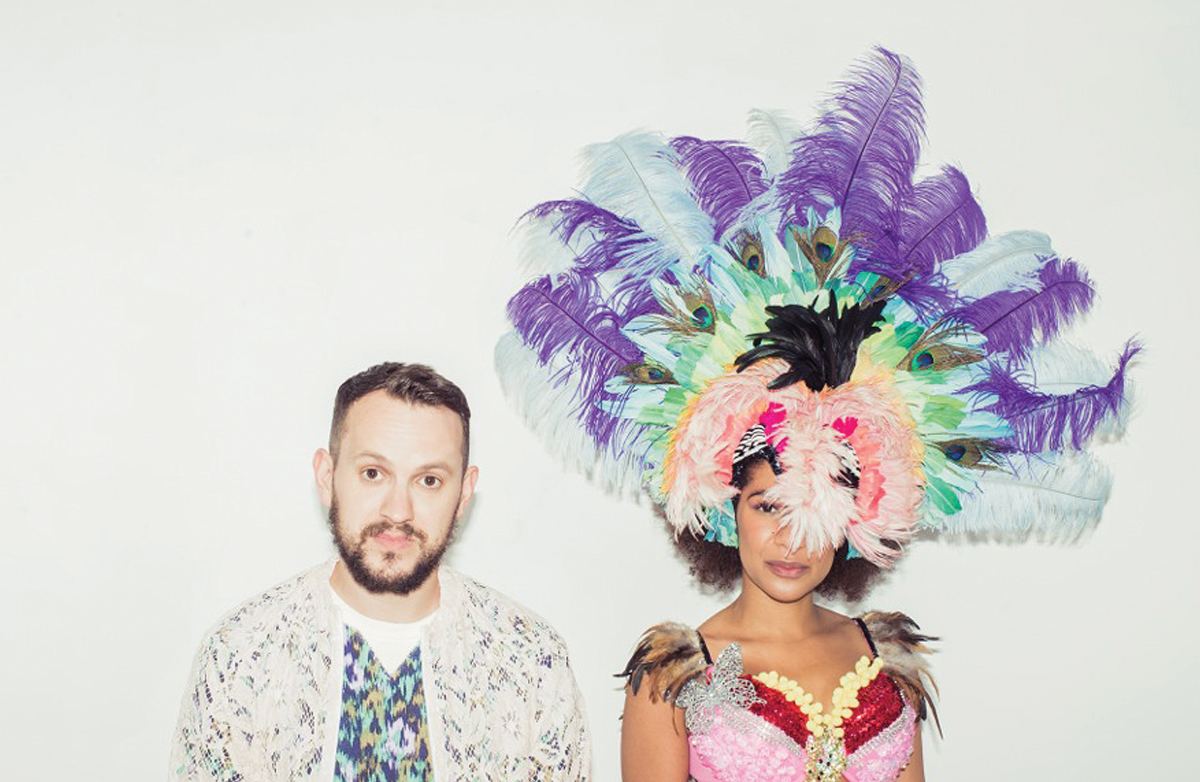 From getting fired – yes, fired! – by his piano teacher at just ten years of age, Max Wheeler has come a long way. He is half of dance artists Anushka who have just put their debut album, Broken Circuit, out on Gilles Peterson’s Brownswood Recordings. With major festival appearances under their belts, plus a huge world tour and more to come, Anushka are the current darlings of dance.

But Max doesn’t do music production in a very typical way. As we’ll see, that early-years sacking led to multi-genre music production, two label signings and his current success. It’s an interesting tale with an even more interesting mix of gear: from mod trackers to Push, from that piano to two completely different gear set-ups, so we’d best get on with it… 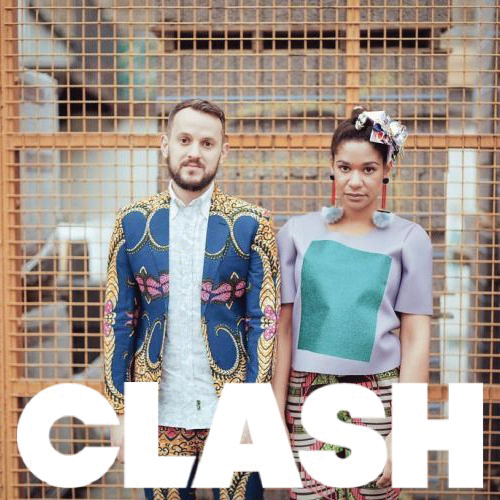 MusicTech: We might as well go back to the start as it’s question number one. How did you get into music production in the first place?
Max Wheeler: I guess it goes back to when I had piano lessons aged ten and I was fired by the teacher. He basically got rid of all of his bad students and kept the best, and I didn’t make the grade. I took it as a bit of a challenge and had this little keyboard, a Yamaha, I think, that you could sample into. So I lost the lessons but got into sampling all sorts of noises, playing them back at different pitches, and I think you could loop stuff on it too.

From there I got into mod trackers. I had a mate who had worked out how to make hip-hop beats on this shareware one that he had. I had a really early Mac and found the equivalent tracker for it. Then we started getting competitive over who could make the best beats on these terrible bits of software. It was around the time of the Aphex Twin and The Prodigy and I was obsessed with these electronic noises.

MT: When did you become successful?
MW: Well it progressed from there and I ended up getting a record deal when I was quite young doing hip-hop. So that got me into more producing, and more into sampling loads of vinyl. I ended up getting an Akai MPC but didn’t really use it for hip-hop! When that project ended I had quite a decent studio but was at a bit of a loose end over what I wanted to do so I started working with live musicians, but whenever I went back to the MPC I started to get excited again. I was learning a lot from doing all this other music but was leaning more to electronic music so I ended up eventually settling on my house music sound.

I started demo-ing this sound – house music, bass music, that kind of thing. In 2011 I met Victoria Port and I’d done this track called Yes Guess but it was an instrumental. I wasn’t expecting anyone to be able to write anything to it as it was pretty weird, but she came back straight away and had done a complete vocal on it. We got management off the back of that and one of them knew Gilles Peterson. He sent that track to him and he played it on the radio the same day and we got signed to his label, Brownswood Recordings. 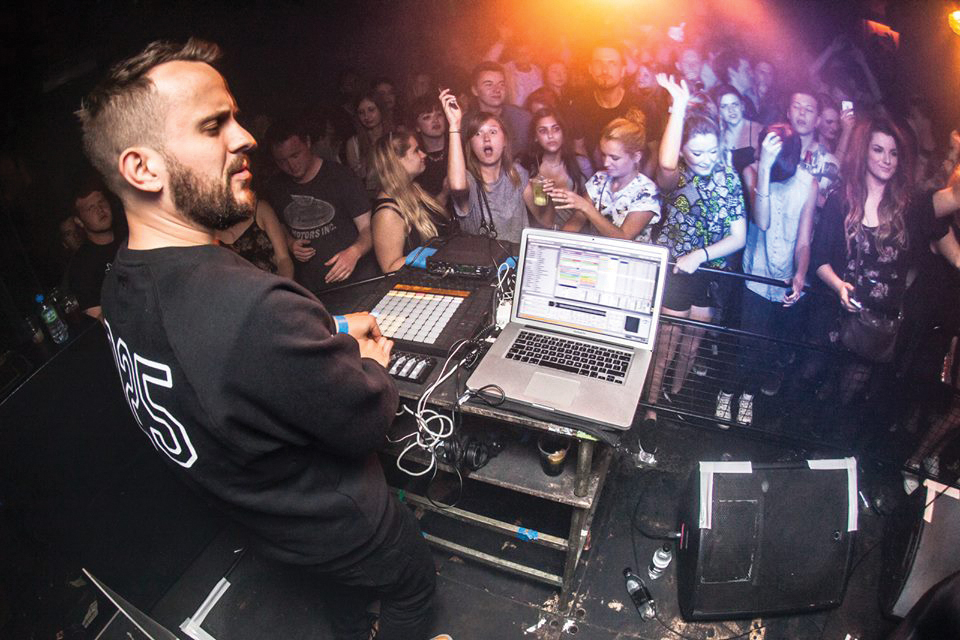 Max uses Logic in the studio but breaks out Ableton Push for gigs. Photo by Luke Smith

Studio Tech
MT: What’s your philosophy on studio gear?
MW: I’ve started to believe in restricting your palette a little. You have to go through that phase of getting kit and loads of plug-ins, but when you find your sound you realise it’s only four or five things that you are using, so it then becomes a case of seeing how you can become more creative with them. I started to use a Roland Juno-6 on everything, the MPC on everything and certain drum sounds, and then I realised I had a good sound going on.

And when you are getting new kit every week and your sound is changing because of it then it becomes hard for people to follow what you’re doing. They’ll hear your music and think it’s three or four different producers, but for people to invest in something they have to be able to hear some continuity.

MT: So tell us about your main studio bits…
MW: The core of it all is the MPC where I sketch out ideas. I’ve just got the new Mac Pro, which is exciting, and I’ve got a UAD Apollo soundcard so I use the UAD plugs quite a lot.

I’ve got an MPC Renaissance and it’s one of the things I use to produce drums. I’ve got a Juno-6 which is MIDI’d up, a Novation controller keyboard and also a reel-to-reel tape recorder, which I use a lot to mess about with stuff. I’ve got assorted foot pedals and Focal monitors and sub to listen back to stuff. 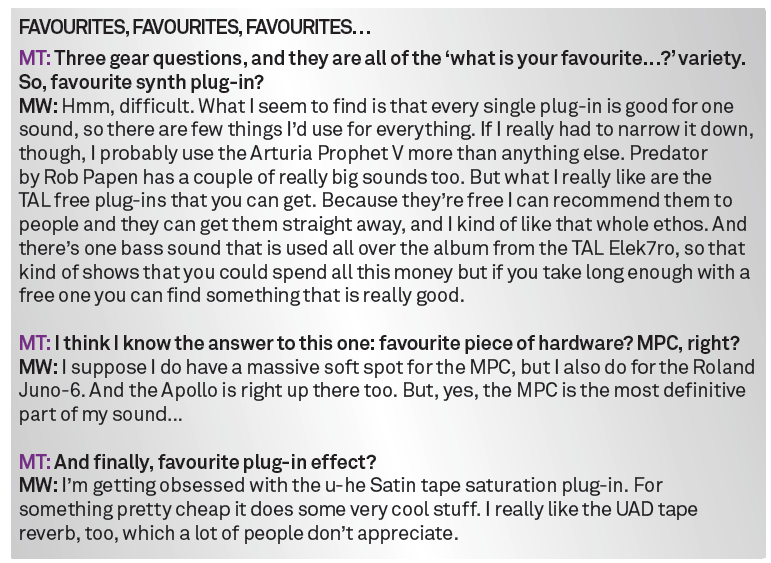 MT: Nice monitors and set-up. What about the software side?
MW: I use a lot of plug-ins: the Arturia range, Rob Papen’s products, and I quite like the u-he stuff at the moment too. I’ve just got the new Logic going and now I have all my old 32-bit plug-ins working I’m really enjoying it. 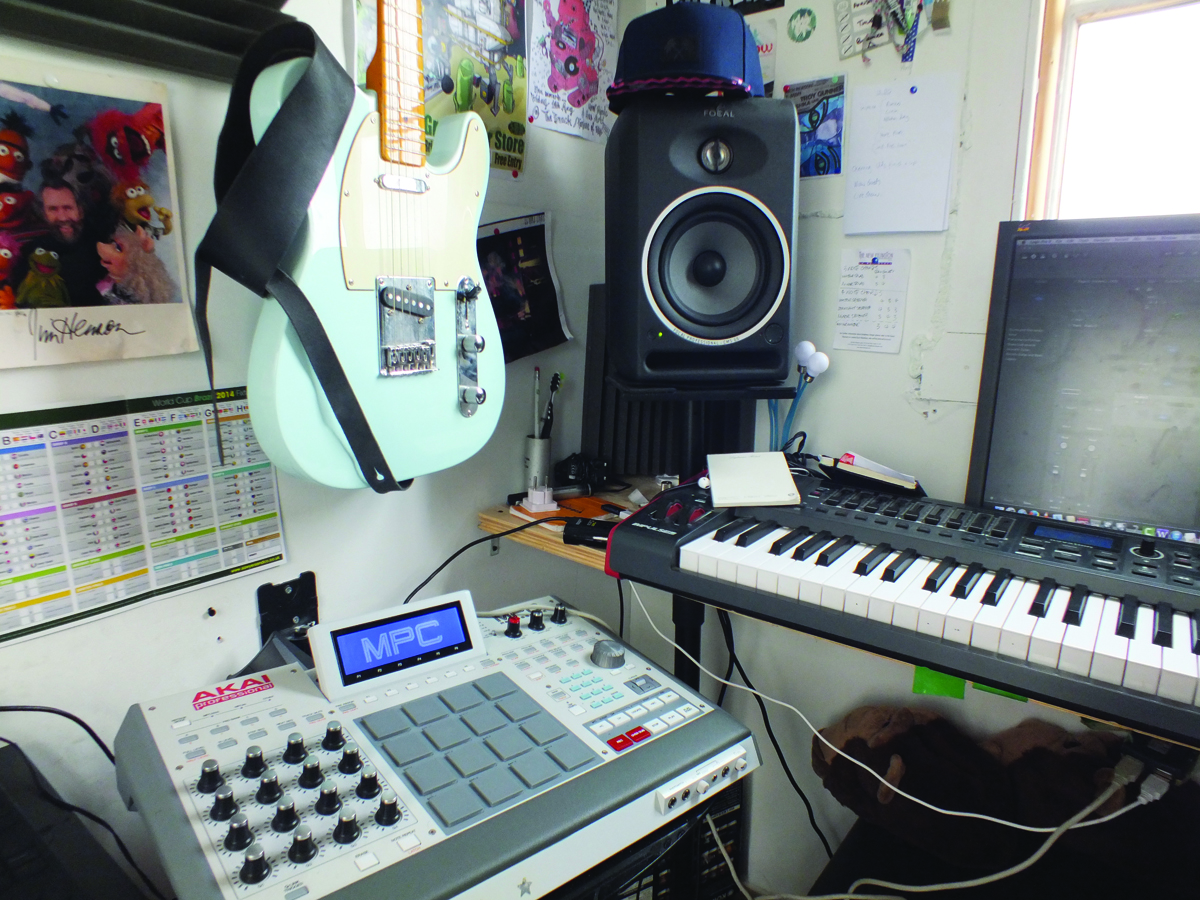 MT: I found the bridging software to run them was a pain to use, to be honest, and gave up…
MW: Yeah, same here, it was so annoying that I was not using them, but we were on tour with Gorgon City recently and one of them told me about the bridge software he uses called 32 Lives [by Sound Radix – Ed]. With this one you install it, run it, it resurrects all the 32-bit plug-ins and it just works.

MT: Brilliant I’ll have to try it as Sylenth1 was all over my music at one point and was still 32-bit when I last looked, so consequently there are a lot of holes in my unfinished tracks (i.e., all of them)!
MW: Yeah, Sylenth1 was one of the main ones I was using too!

MT: So how does a typical track come together?
MW: Well it varies, really. Sometimes it will be starting with something Victoria has done and I’ll build it up around that, other times she writes to my production. With me, I’ll get some drum sounds into the MPC. I like to get a sample of something in there too, say, something from the Juno, which I then chop up using the MPC to get a basic loop.

I’ll do maybe ten different sequences on the MPC, take the best two or three and export the stems into Logic. That’s what’s good about the new MPC: the way you can chop things up and the stem export, which you couldn’t do on the old one. Some people don’t get on with the Renaissance as well as me but I’ve been using an MPC for so long I really enjoy the new one. 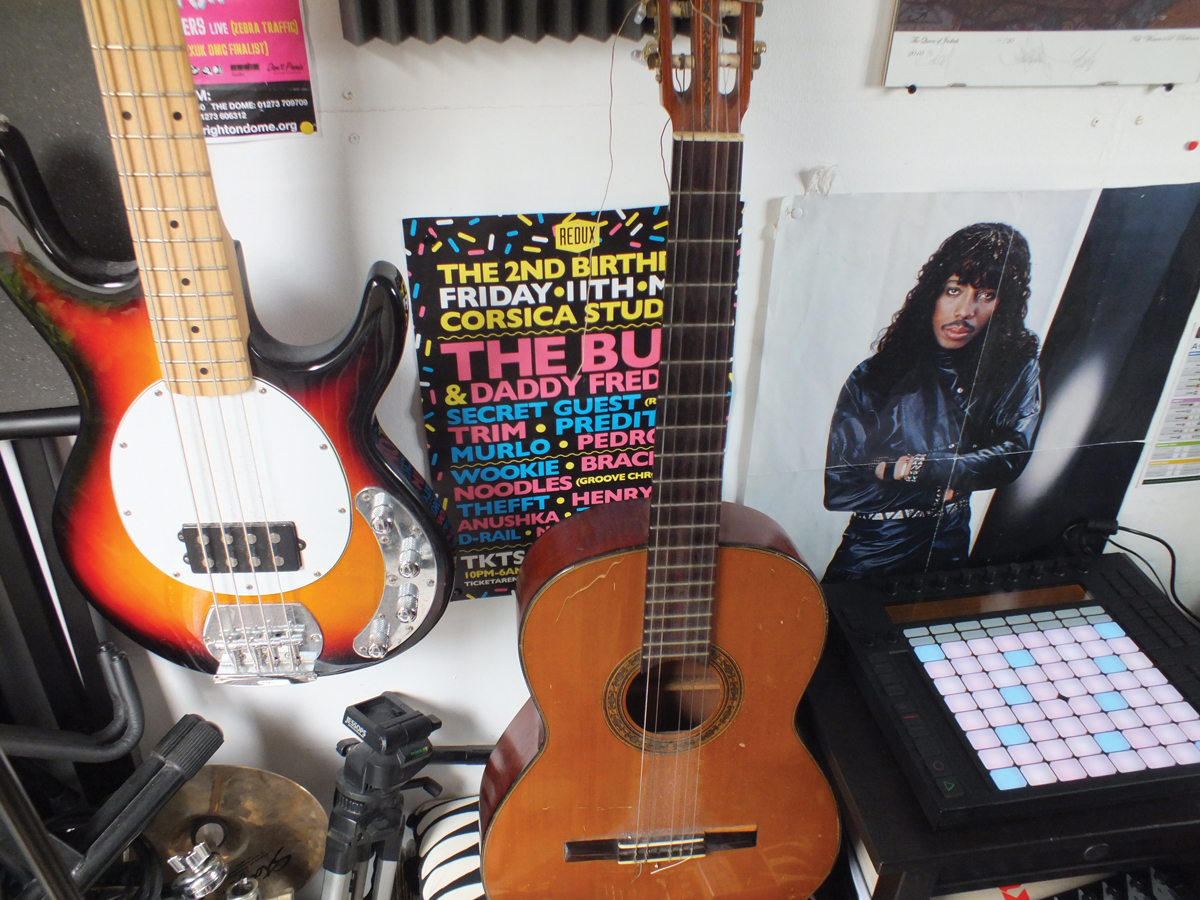 Bass and acoustic guitars sit next to Push

MT: I saw that you did a demonstration of Ableton Live and Push at the Ableton Open Day at Point Blank a few weeks ago, yet we’ve had no mention of those yet…
MW: Yes, my live set-up is very different from my studio set-up. I’ve just found that for the live stuff Ableton is amazing and pretty much all I use. And I’ve been getting more into Push and have started writing with it.

Push to me is somewhere between the MPC and the APC that I was originally using to trigger Ableton. So what I was doing on tour was taking both the MPC and APC with me to control Ableton but now I can just use Push, so when I’m touring now I can put my laptop, soundcard and Push in the carry-on luggage on the plane. Because we’re doing so many shows it’s really nice to have the whole set up in one bag.

The step sequencer on Push is amazing. To be able to sequence drums like that live is great, especially when you are doing it in low light conditions in a club. 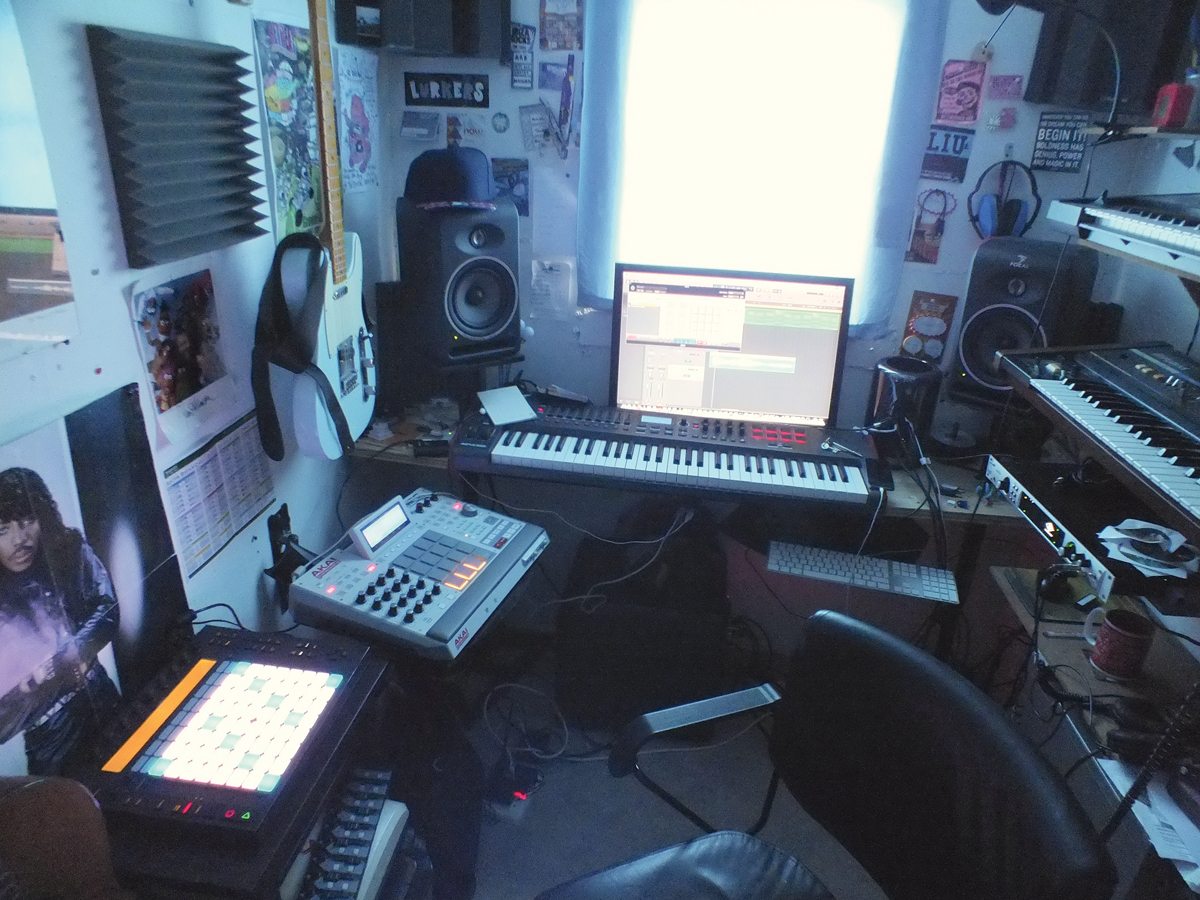 MT: So how do you marry your two very different studio and live set-ups together?
MW: It can get even more complicated. Most of the time I’ll build the track in Logic, record Victoria, work it, chop it up until we’re happy and then I send off stems to be mixed for the final record. I’ll then get stems back from the mix engineer to then put into Ableton.

What I used to do was take the separate stems into Ableton and then sequence them together live. But what I’m starting to do now is decide which bits I want to perform live and then put a backing track together without those parts. So quite a lot of the time I’ll have the track without drums and I’ll do the drums live, or won’t have the keyboards on another track so do those live.

What a lot of people do is trigger the stems live in Ableton but people can’t really tell what they are doing and I don’t really know if that is performing – you know it is but the audience can’t hear or see any difference, so I find the bits in the songs that are worth doing live and then perform them in a way where people can tell.

It’s an interesting one – what I might do eventually is get more players in to do more of the parts. What I really like is live drum programming, so it will probably be me using Push for that. 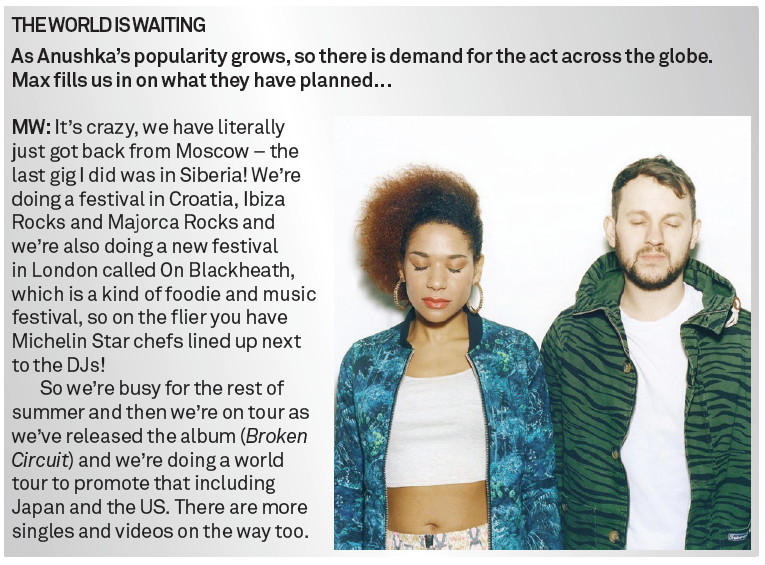 MT: Finally, do you have any production advice you can share?
MW: I worked with Nick Smith who had a project called Long Range [fellow Brighton band also featuring half of Orbital – Ed] and from him I picked up the idea of subtractive EQ – taking away stuff you don’t need. I do quite a lot of training and teaching and it’s one thing I always talk about. The gardening analogy I use is that it doesn’t matter how many flowers you have because if there are weeds everywhere you are not going to see them.