If you have ever wanted your music to score major TV and film productions, you could do worse than taking advice from someone who has been there and done that. MusicTech talks to Aisling Brouwer about how to succeed in the world of media music composition… The chances are you’ve realised that writing pop music […] 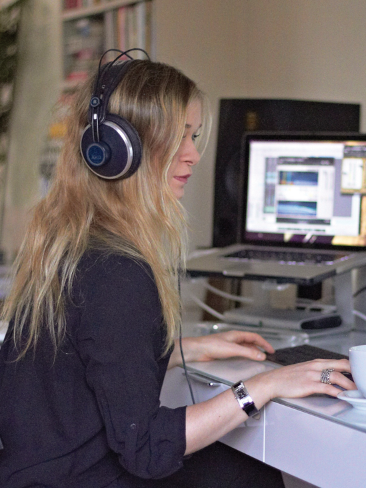 If you have ever wanted your music to score major TV and film productions, you could do worse than taking advice from someone who has been there and done that. MusicTech talks to Aisling Brouwer about how to succeed in the world of media music composition… 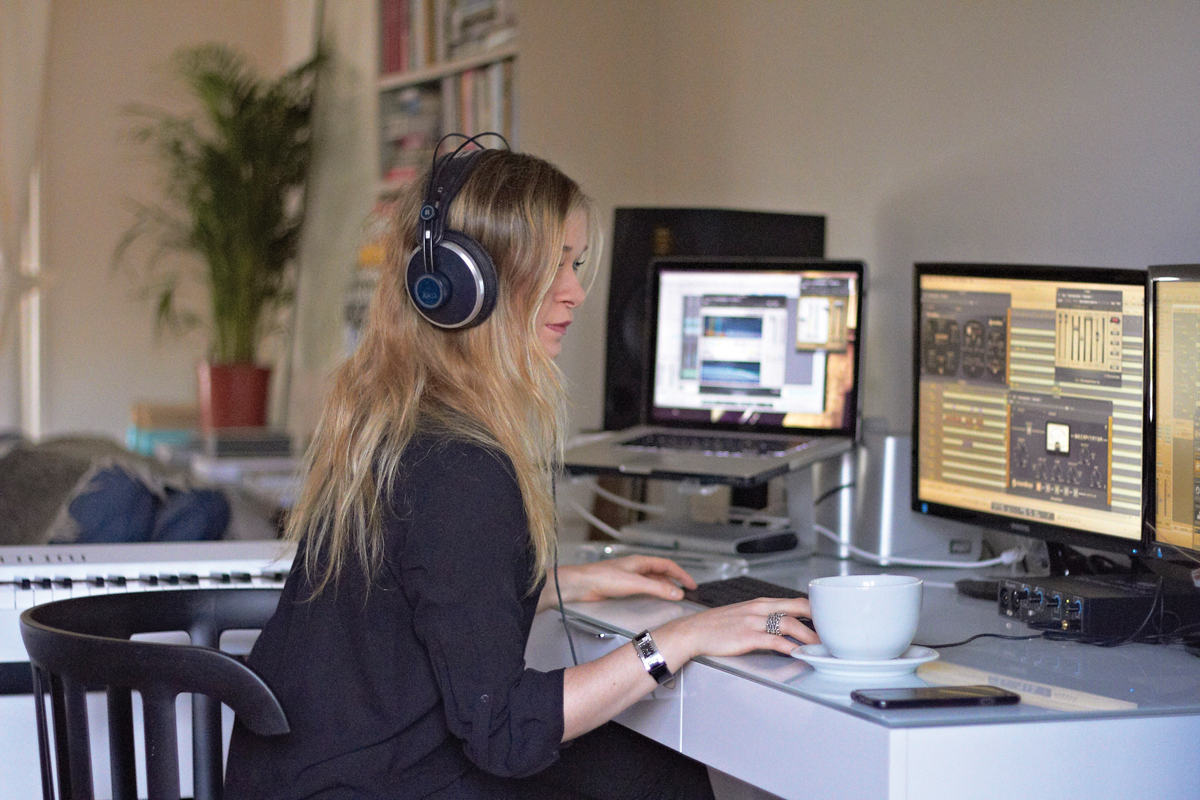 The chances are you’ve realised that writing pop music is only for the brave and that getting music syncs for TV and film is where your creative focus could and possibly should lie. In fact, this has become one of the prime outlets for today’s music producers’ output, because there are more TV shows, video games and films produced than ever before, all requiring soundtracks of one kind or another.

But it can be a difficult area to break in to. Aisling Brouwer has scored major TV shows such as The Apprentice, The Calling and The Taste. Her set-up has already appeared in MusicTech’s Show Off Your Studio feature, but we were so impressed with her musical CV that we had to get her in for a MusicTech guru grilling…

MusicTech: How did you get into music production and working on TV and film composition?

Aisling Brouwer: I have been writing and producing music ever since I was a kid, but initially started as a singer/songwriter. After moving to the UK to study songwriting, I decided to change my course to music and film composition with an aim to focus on writing music for the screen. I spent my second year studying in Los Angeles as an exchange student and, encouraged by my tutors, I started approaching the film, animation and theatre departments to instigate collaborations.

These projects confirmed this was the path I wanted to go down, and during my MA in composition for film and TV, I started working as a freelance composer for several London-based companies.

I met Dru Masters and was given the opportunity to pitch for one of the series he was scoring for the BBC (The Big Allotment Challenge). Luckily, he liked it and I started several more projects with Workhouse Music. Once the ball was rolling, I started getting in other projects and I moved to London to pursue the career full-time.

MT: What was your original goal?

AB: It was to be able to sustain myself from music alone, and write music for film in particular. The problem with film is that unless you are working on big projects, the budgets are often derived from personal funds – and therefore TV and production music can be a more lucrative starting point.

I fell into writing for TV and documentary series, and try to balance that with film, trailer, production music, and personal creative projects. I have achieved the goal of writing music for a living for now, but I don’t believe in chasing one isolated goal in my career – my objective is to challenge myself, push my work further, and be creatively innovative.

MT: What have been your most successful projects?

AB: I’d like to think my most recent projects are always more successful than the last few, and I always treat every new project like it’s the best thing I’ve worked on. I don’t think my career has spanned long enough yet to pick one out of the hat that’s peaked my career, but I guess the one that jumps out on my CV the most is the 10th series of The Apprentice.

Working with Workhouse Music, I got the chance to work on some great TV series for BBC, Channel 4 and TLC – but in terms of my best musical work I am proud of some of the tracks I’ve written for production music, film music and even personal projects that sent me down new compositional paths. 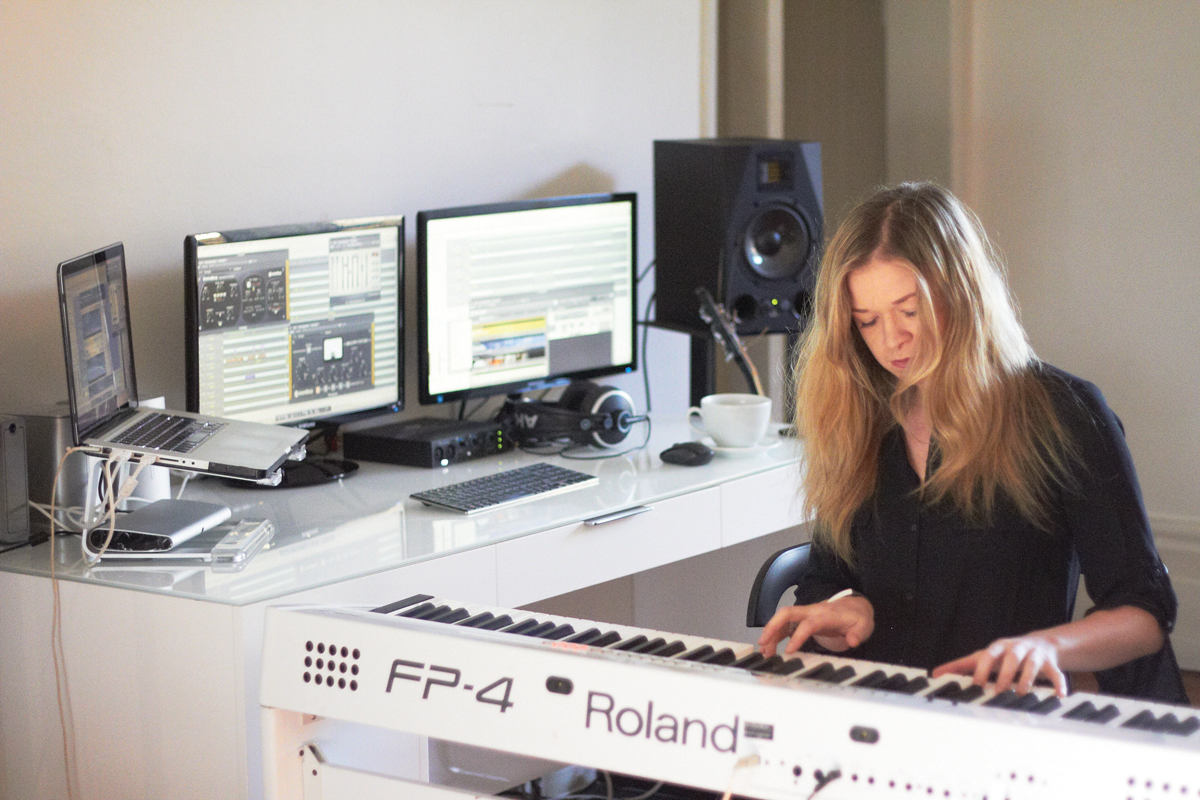 MT: What do you think about the way music production technology has progressed? How has this been good or bad for the media composer?

AB: A decade ago, I had just bought my first DAW and was recording mostly in other people’s studios with more experienced engineers and producers, so I am mostly struck by how accessible music technology has become to people with less experience. The interfaces have become much more intuitive, and it is no longer necessary to own a vast amount of hardware equipment and expensive gear in order to produce good music.

Given that I spent the past seven years moving cities nearly every year, and was back and forth between the US, the UK and The Netherlands, I could transport a fair amount of my studio without too much effort; this had considerable advantages. On the other hand, one could argue that because music technology has become so widely available, and much more affordable, it tends to make the competition tougher.

Distinguishing your sound from the masses, and competing with a much larger pool of composers, producers and artists can be a complicated process – and keeping up with new developments equally challenging. There is a rawness and authenticity to production that is lost when everything is so easily perfected digitally, and demos no longer suffice if they are actually demos when pitching against so many people – they should more or less be the final product for the project.

MT: What happens with a typical commission?

AB: Depending on whether I’m working directly with the series producer/director/creative or through an agency/music production company this varies hugely. If I’m involved from the beginning, there are usually several meetings, coffees, and spotting sessions to talk through the overall aims of the project, and in what ways the music can serve to achieve this.

More often than not, a temp track and/or reference music has been added during the edit. Rarely, the composition comes before the edit. If this is the case, or if the track is production/library music, I write the track according to the stylistic brief but not directly to picture.

Most of the time, however, the music is the last thing to be added, and thus the deadlines can be exceedingly tight. Once I’ve established the musical palette, I start by tempo mapping and marking the various hits, builds, fades, transitions and so on.

I then get cracking on establishing the main compositional elements and try to do most of my mixing and processing along the way to avoid changing the sound too much at the end. If the project isn’t under a tight deadline, the composition usually goes back and forth between the composer and the client a few times to make room for adjustments, tweaks and variations before the final version is delivered and the project concluded. 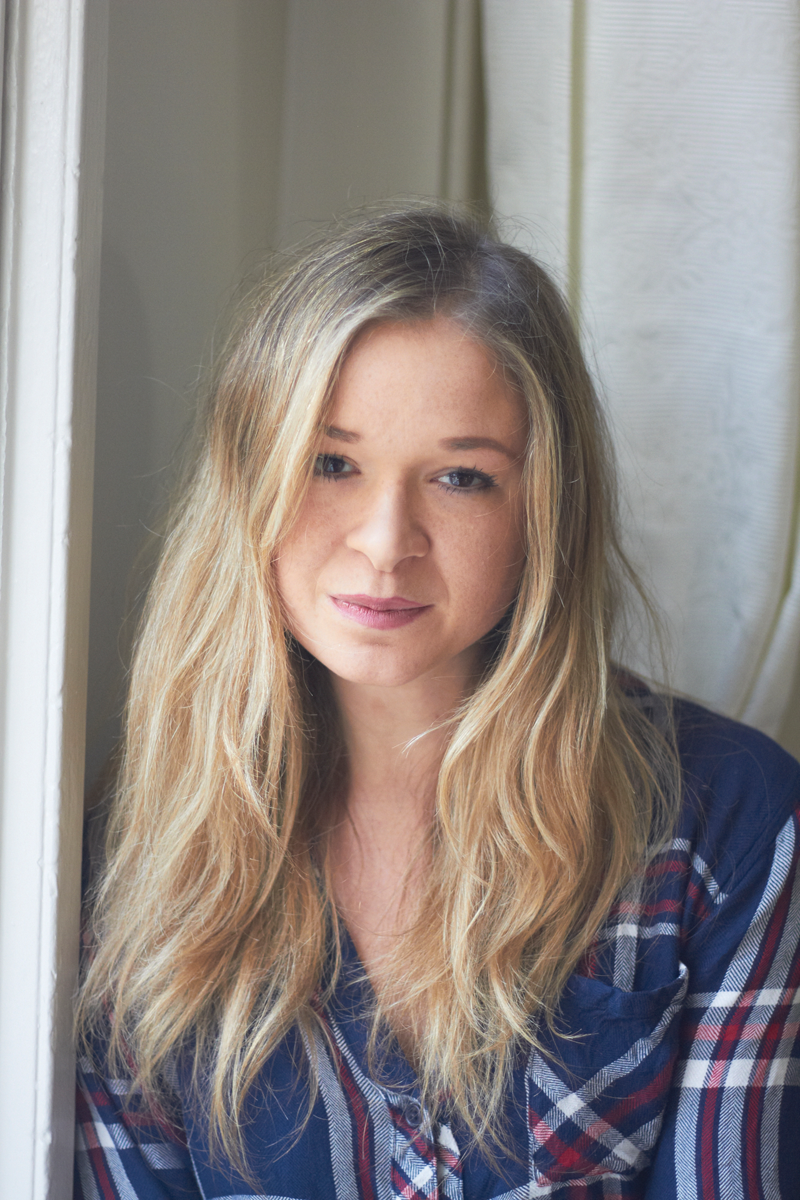 AB: I think because I’ve written for orchestral ensembles quite a lot, I often get asked about my arrangement and production techniques concerning the amalgamation of classical and commercial music. Most of the emails I get, however, are more inquisitive about how to break into the industry, which companies to approach, which sound libraries or plugins I use, or just general advice on making money from composition.

I think it’s useful for any composer to have a basic knowledge on orchestration and arrangement (The Study of Orchestration, by Adler, is great), as you will never get the full potential out of ensemble instruments if you’re pitching them in the wrong register or layering them inefficiently.

Never pan orchestral patches that have been recorded in their original layout, or the whole ensemble will sound incoherent. I tend to try to find natural-sounding patches so that some light reverb, compression and creative EQ are sufficient to create an authentic sound. Waves MV2 is wonderful for getting the best out of a sound.

MT: Are there any particular production processes that trouble you on scoring projects?

AB: One that I am completely guilty of myself is overwriting a piece. It is so easy to get carried away and to keep adding layers to an arrangement, but I usually end up stripping off half of it at the end of the process. The advice passed on to me back then was be confident with the sounds you use, let them cut through and remember that in most cases, less is more.

MT: What advice would you give anyone entering the world of music production with the view to making a living from it?

AB: It sounds dull, but networking really does make all the difference. Approach as many people as you can and listen to what they have to say or any advice they can give you. Aside from getting to know directors, producers, and liaising with agencies, it can also be valuable to develop relationships with other composers, because often work is delegated between them if they are unable to complete projects on their own.

Be confident in your own abilities, but never stop learning from others. I often send mixes off to friends who are producers/engineers/composers, and no matter how finished I think a track is, there is always something a fresh pair of ears will pick up on, that you may have missed.

Be disciplined enough to keep yourself constructively busy, even if you have a period of less work. Most importantly, be open to new opportunities and don’t get too hung up on ‘only working on certain projects’, or achieving a certain goal immediately – it’s the jobs you do in-between that define you and build your skill set. As well as being versatile, try to figure out where your strengths lie and build on these.

Just because you want to be versatile, doesn’t mean you have to be able to create every single genre of music, so pick your battles and develop a style of your own that people can identify you by. 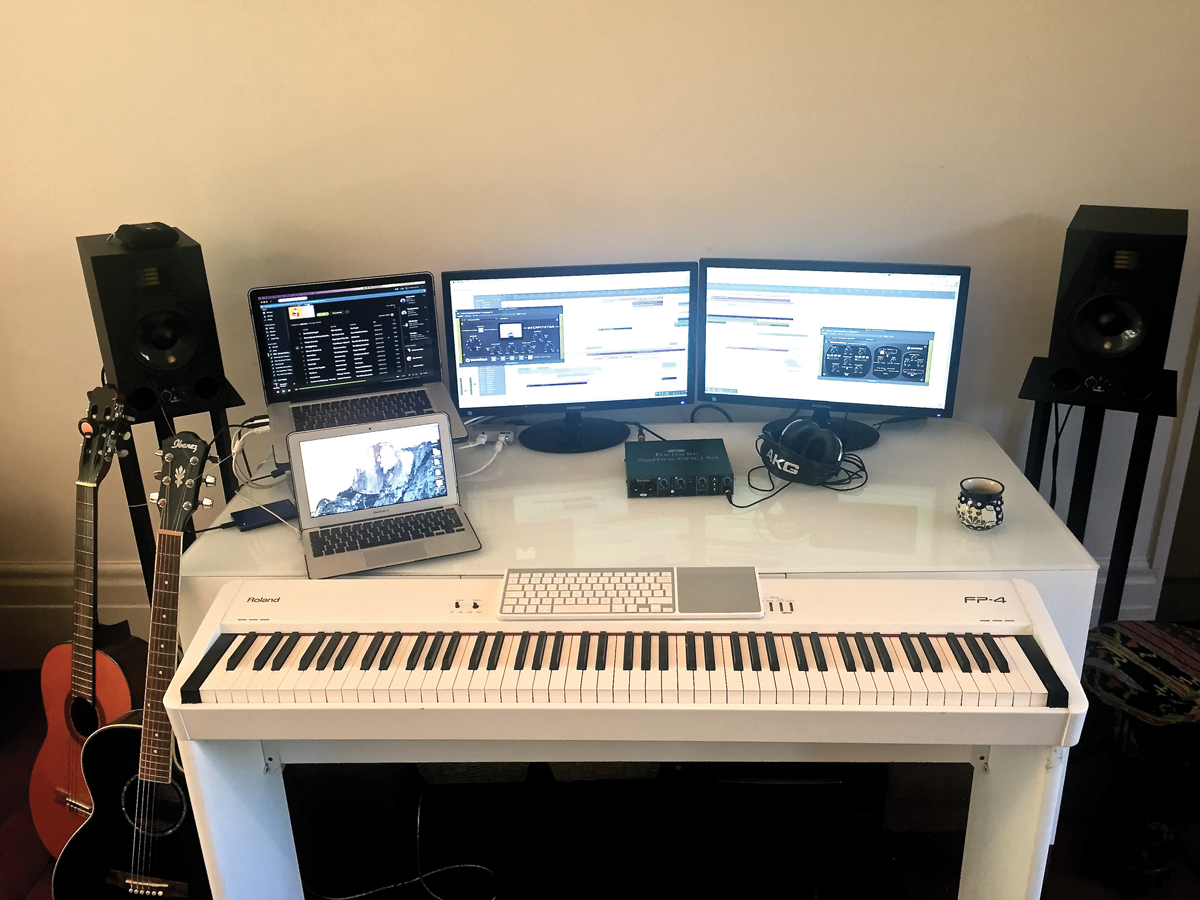 MT: What is the future of music production in less than 100 words?

AB: Unfortunately, I suspect the large increase in use of production and library music will continue to surge, and therefore composers and music companies will have to find new ways in which to work around and alongside this.

Large conventions such as NAMM and Musikmesse constantly exhibit exciting new turns in music production technology that will continue to shape and innovate music production worldwide; and given how much has changed in the last decade, it is difficult to imagine what the next 10 years will bring, but also exciting!

MT: Finally, what are you working on now, and where can people find out more about you and your work?

AB: I am currently in development with some exciting new projects, and I try to update my website: www.aislingbrouwer.com and soundcloud: www.soundcloud.com/aisling-brouwer as frequently as possible. The documentary series Extraordinary Pregnancies has just started on TLC Discovery Networks International, and I hope to release an EP later this year of my personal projects as well – so keep an ear out!